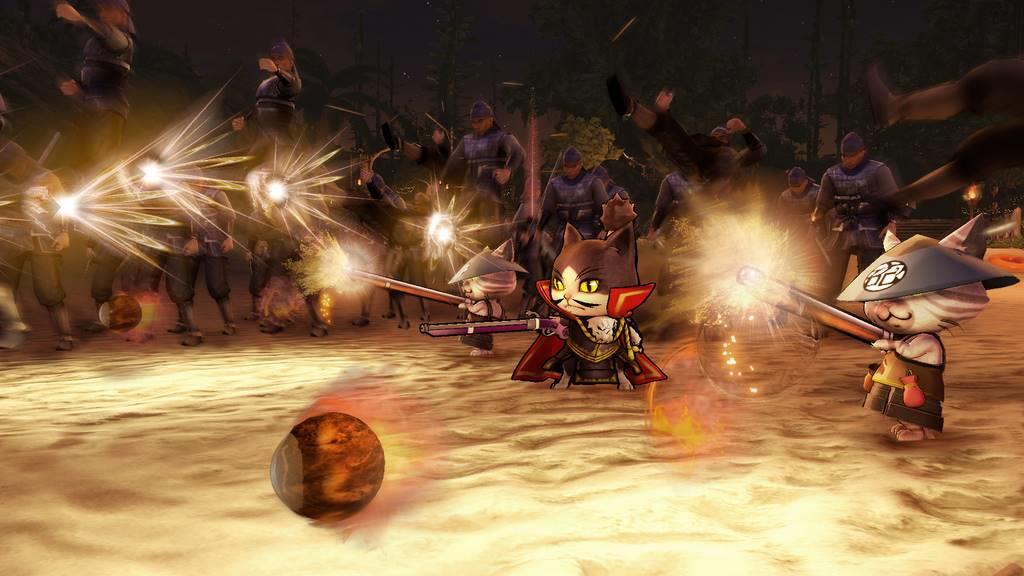 I have played and reviewed a lot of Warriors or Musou games during my time here at Gaming Nexus. Some are great, some are just okay, but, for the most part, they have all had something about them to enjoy. Truth is, most of these games are all the same but no matter how many of these games that I play, they just never get old to me. Being able to destroy hundreds of soldiers in seconds with insane, over-the-top attacks is oh so satisfying. So, here we are, and Omega Force has now released Warriors All-Stars. A game that takes of ton of characters from various Koei Tecmo games and puts them all into one fantastic game.

Instead of having a massive roster of around 100 characters like previous Musou Games (mostly the Warriors Orochi series, which is another "compilation" crossover game), Warriors All-Stars instead focuses on a smaller roster of 30 characters from various Koei-Tecmo titles including: Dead or Alive, Ninja Gaiden, Nioh, Dynasty Warriors, Samurai Warriors, Deception, Toukiden, Nights of Azure and more. From Kasumi, Marie Rose, William, Lu Bu, Yukimura Sanada, Arnice and others, Warriors All-Stars features a very respectable list of fantastic characters for those, like me, who are fans of Koei Tecmo titles. A handful of the 30 characters in the game are selectable from the start, with others needing to be unlocked via the main story mode. Selecting a character at the start determines what story route you will be going down as you represent one of the three main characters of the story: Tamaki, Shiki and Setsuna.

All three of the stories, however, are essentially the same idea, and the story itself is pretty underwhelming. An ancient spring which has sustained life on earth for years has died, and thus all of these characters from various franchises all get transported to the world together to help and save the earth. Most of the main story, however, is just a bunch of nonsense about Tamaki, Shiki and Setsuna arguing over who should be the one to claim the new throne. I doubt there is any kind of canon or continuity with any of these franchises, though. I mean, Ayane shouldn't be calling Kasumi "the cowardly traitor" anymore. The game does feature multiple endings, most of which are joke endings and a true ending, so there is plenty of reason to replay the story mode multiple times over. While it's unfortunate that there is only a single game mode—which is story—at the very least, the story mode itself provides a variety of different missions that you can choose from. 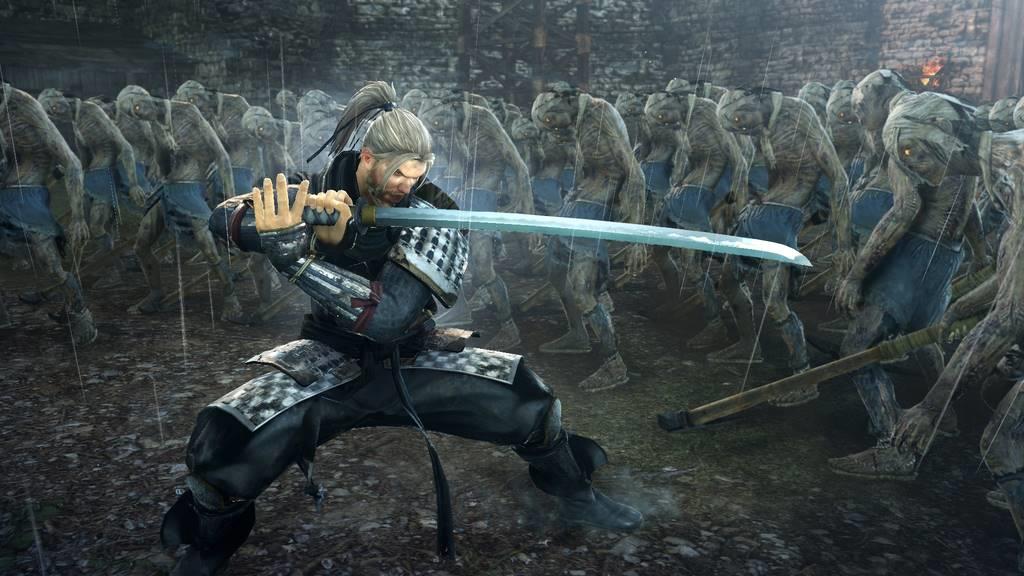 Aside from the story missions, there are multiple other side missions and quests on the map that you can choose to play in any order. These missions will have objectives such as preventing an ally from being killed, defeating certain officers, or capturing enemy keeps in a certain amount of time. These missions, when completed, will provide your party members with huge amounts of cash and XP. The thing about these missions, however, is that the difficulty of them can be pretty deceiving. I was running a team where all of my members were around Level 15. I decided to do one of the missions where it said the recommended level was only Level 6. I figured I would be fine, until I got into the mission itself where enemies were taking almost no damage at all from my attacks and I was getting leveled by enemies in just a few hits. The map features a "fog of war" system, so when you complete a mission the fog around that mission will lift and reveal more missions to complete. The biggest absence in this game, however, is that there is no free mode that just lets you play missions with any unlocked character you want and level them up. While you can easily replay missions in the story mode, it would be nice if there were a mode where we could screw around without worry.

Battles in Warriors All-Stars are exactly what you expect. Run around the battlefield, hack and slash hundreds of soldiers, take enemy keeps, eliminate enemy officers. You can bring with you up to four support characters to help you in battle. Each character has their own unique support ability which goes on a cooldown after it's used. Some of these abilities include giving back health, buffing your attack damage or your defense, nerfing the enemy, etc. Here is a tip: have Millennia in your lineup at all times. She has probably the most over powered and helpful support move in the entire game, where she pulls in all enemies close by and lets you unleash a Musou attack on all of them. This is incredibly helpful when needing to defeat bosses or officers. The game also features a "bond" system. Keeping the same characters in your party will increase their bond and can unlock bonuses, including special team attacks, which can be utilized in battle. That said, these bonds are hardly anything more than small banter that occurs between characters, most of which references their time in the games they represent. For instance, if you don't play Dead or Alive, you probably won't know why Ayane considers Kasumi to be a "traitor." 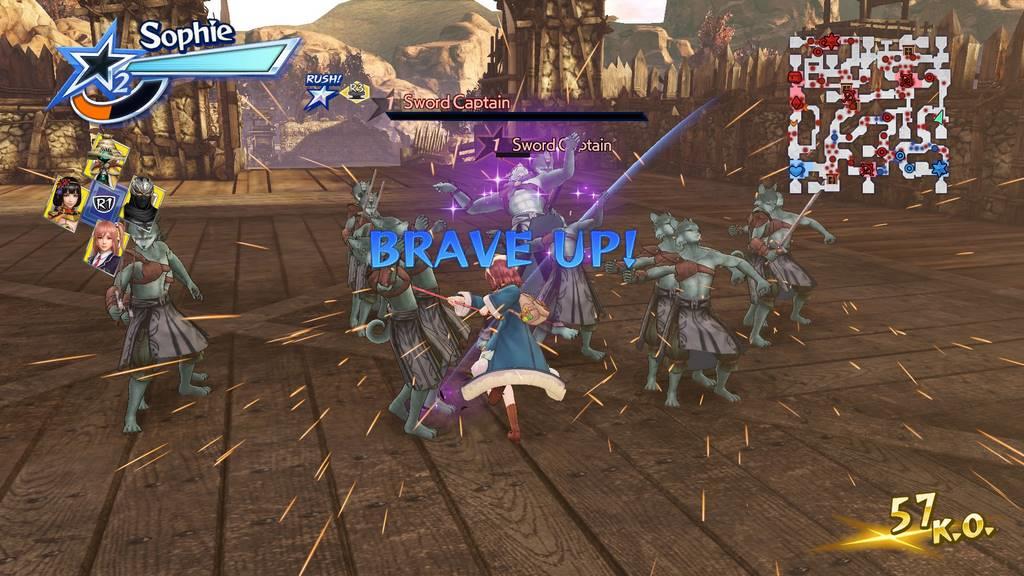 The coolest new feature of the game is the new "Musou Rush." During any battle you have the ability to activate Musou Rush which will instantly cause hundreds of soldiers to spawn around you. You are invincible while also gaining increased attack speed and damage. During Musou Rush you can slaughter hundreds of soldiers in mere seconds, and killing a certain amount of soldiers will extend the 20-second time limit of Musou Rush. At the end, you and your teammates then unleash a nuclear explosion which wipes out anyone and anything around you. Then you can stand there and bask in the absolute avalanche of items that you instantly pick up once the rush ends. I think my high score for Musou Rush was around 1,900 kills in 30 seconds.

Out of all of the Warriors/Musou games that I have played, I would put this one right up there with Warriors Orochi 3 and Hyrule Warriors as one of my favorites. It's still the same hack and slash action you have played many times before, but the small changes keep things fresh. That said, this game is total fan service to those who are long-time fans of the series. While it may attract some people who are fans of characters from the various series, I can't exactly think that this is going to make any new players of this long-time series. Myself however, I love this game.

It's pure fan service, and the story is absolute nonsense, but it's the most fun I have had playing an Omega Force Musou game in a long time. Fans of this long-running series of games will love this, but it won't do much to make anyone looking in give the series a chance.