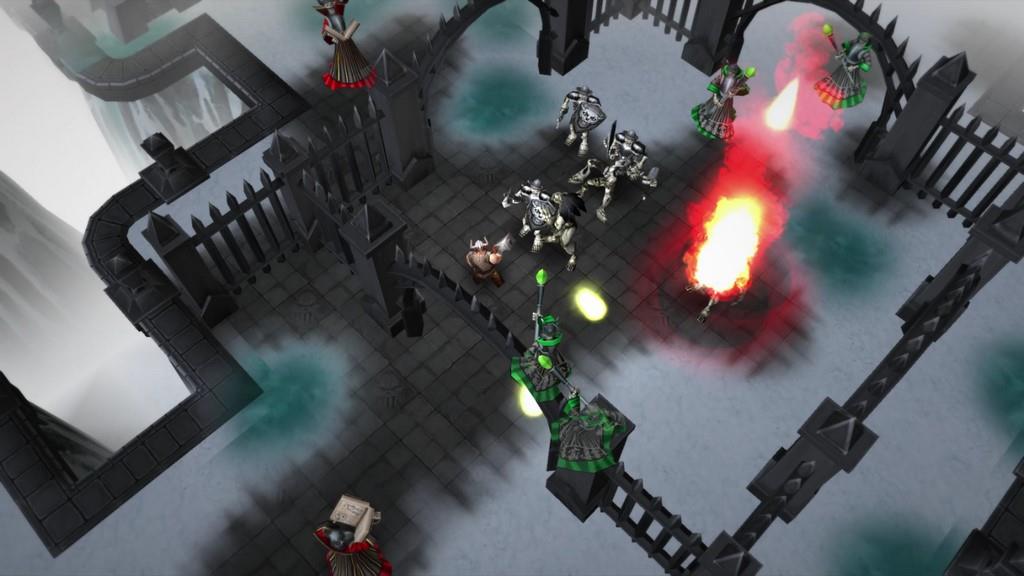 In Runic Rampage, you lift the mighty hammer of Grimbard: the last surviving dwarf champion. Grimbard's quest is to save his village from a disease that threatens to end life there as he knows it. Luckily for the sick, this dwarf is prepared to smash many ogres, demons, and goblins to bits - all in the name of curing townspeople.

After five years of development, Runic Rampage is the premier title from the team at Electrocosmos. At first glance, it's obvious that this game is inspired by arcade classics such as Golden Axe and Gauntlet. Simplicity is one of the key elements which Runic Rampage draws from the successes of yesteryear.

As things start off, the player is given a quick tutorial on how the game's handful of combos are executed. After that, it's off to the bloody fray. This is a nice relief from a more complex combo system. While combat remains simple, diversity can be found in each new enemy type. It feels good to have a core set of combos at your disposal while also forming different strategies to fend off new foes.

Spells drop as items from enemies, and are usable in a fight. Once activated, spells introduce elements such as fire, frost, or venom. This helped to keep things fresh during a skirmish, giving me something to hunt for amidst the crimson mess that is Grimbard's battlefield. 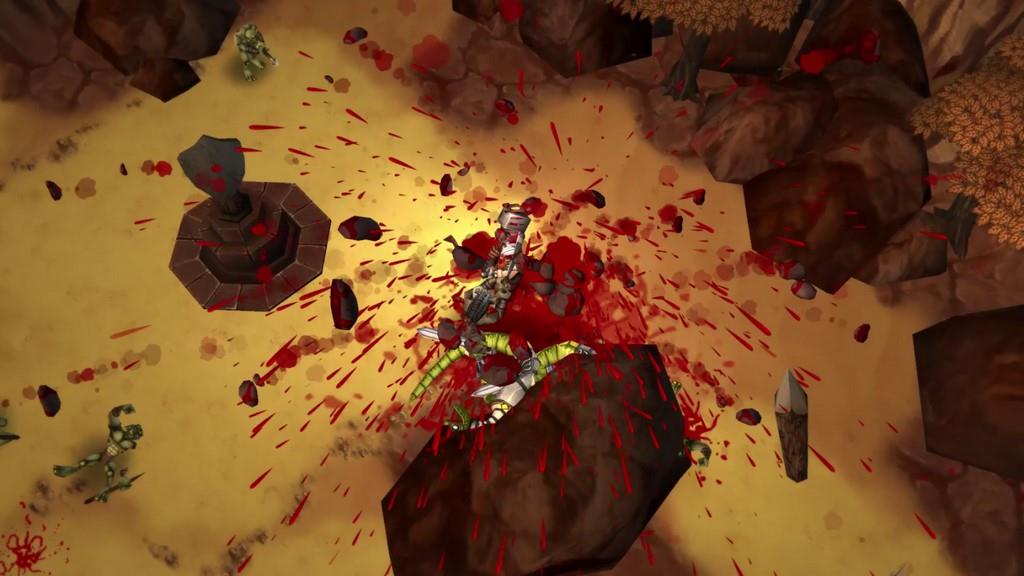 Runic Rampage's campaign is broken up into four chapters, each of which has three acts. Finishing act three opens up the next chapter, but new acts are only made available as the player finds more Rune Fragment. Fragments can only be found at the end of an act, within that act's treasure chest. After defeating the chest's guardian, the player can loot the chest with one final smash to plunder its spoils. Items such as armor set pieces, gold, and Rune Fragments are randomly doled out at this time.

Since Rune Fragments aren't guaranteed to drop, I found this to be a strike against the game's emphasis on simple arcade-style gameplay. Furthermore, it can lead to playing acts over and over again in hopes of getting a Rune Fragments. Relying on randomness to achieve progress did not feel great. However, the player does have control over the way Grimbard grows.

Just as in the classic beat'em-up games it lovingly calls back to, Runic Rampage shines when it acts like an arcade game. 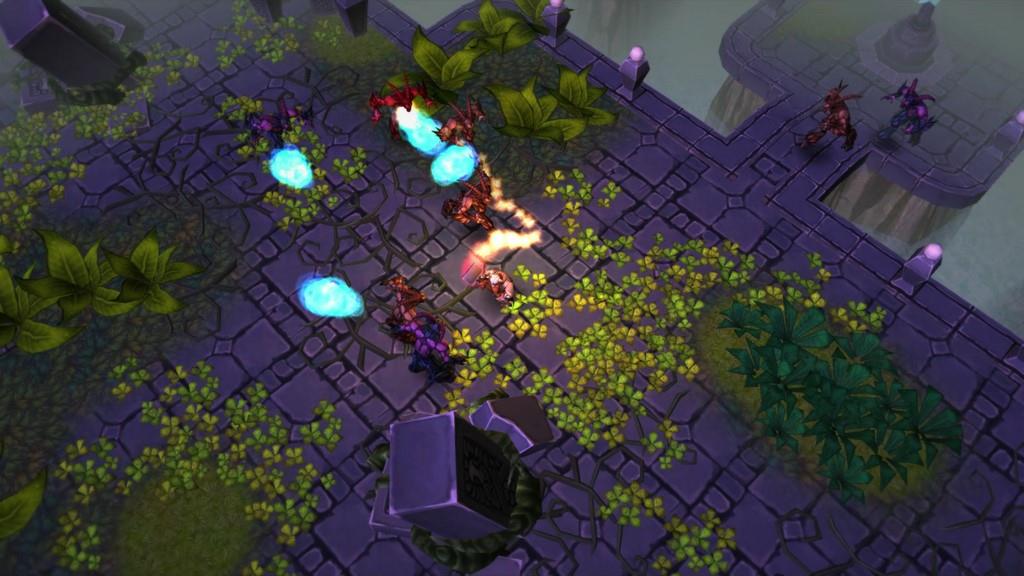 Grimbard gains experience points as he plows through enemies, and each gained level rewards him a few stat points. When an act is finished and the treasure is handled, players are given the chance to distribute these stat points into different attributes. Here, Grimbard's Attack, Defense, Agility, and Greed can be upgraded. Spell abilities can also be enhanced, sometimes adding new moves to Grimbard's arsenal when they're active. Overall, the upgrade process was so straightforward and gratifying that I couldn't wait for my next chance to spend hard earned gold on hammer upgrades.

Focusing on how Runic Rampage delivers an arcade-like experience, there are a few aspects worth pointing out.

One of my favorite parts of Runic Rampage is its combo counter. Challenging myself to get high combos provided the most excitement that I felt with this game. When I got better at chaining combos, I constantly wanted to jump back in for a higher score. When an act is over, the player is shown a report that details how they performed. The number of enemies defeated, time taken to finish, and highest combo are each summarized during this screen. These simple details help nail down the arcade-like experience that lives at the heart of Runic Rampage.

While randomness feels unrewarding in the scope of overall game progress, it feels fun to roll the dice for new armor. As mentioned previously, the player gets a chance to find armor set pieces when a chest is opened. Each time a new piece of armor is found, they are one step closer to completing an entire set. For the glory of giving Grimbard new threads, I'll open as many treasure chests as necessary.

Throughout the game, Grimbard visits a few different locales. From the desert to icy mountains, each area feels distinct and complete. The level design feels genuine, so much so that it took me a few sessions to realize that Runic Rampage makes use of randomly-generated maps. The placement of enemies, traps, and secrets feel intentional - giving me the inclination to explore each act fully before confronting the chest guardian. Who am I to pass up a chance to smash all of an area's pots? After all, I'll be needing all the keys and gold that I can find.

Helping to further build the world's lore, Runic Rampage features short intermission story scenes that are compromised of impressive art and subtitles. In a genre where story is not typically at the forefront, this game does a good job at giving the player something to care about in between boss battles. Those who are seeking to gain just a little more fulfillment from a beat'em-up will find that in these moments. Additionally, the soundtrack is perfect for the dense fantasy setting. Without it, Runic Rampage wouldn't feel nearly as complete.

When it comes down to it, there's a lot more fun than redundancy in Runic Rampage. With arcade and classic-style gaming coming back into fashion, Electrocosmos may have released their first game at a time when players are ready to enjoy the simplicity of an angry dwarf swinging his angry hammer.

Overall, the ridiculously gory fights and simple level system feel fun and rewarding. Even still, progress is sometimes unnecessarily halted by the random nature of finding key items. In spite of missing a beat or two when adding tedium to the experience, Runic Rampage succeeds at providing an old school arcade experience in the present day.