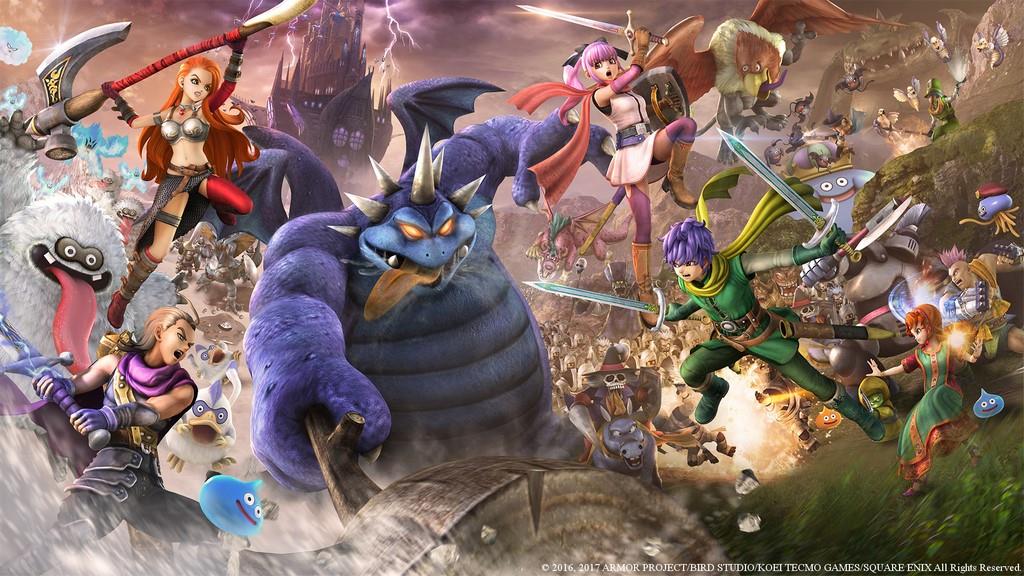 The PlayStation 4 has been on an absolute tear lately with quality titles from Japanese developers. After NieR: Automata and Persona 5 came out, I figured it was time for a drought of games that would last well into the summer. But no, Square Enix had to go and release Dragon Quest Heroes II, and continue to build upon what made the first game so enjoyable. You can see our review of the original title here, and it’s hard to believe, but the team at Koei Tecmo did an even better job this time around. The improvements are all quality-of-life changes that go a long way to making this title just as enjoyable as the first.

One of the first things I noticed when I started the game was the option to change the game’s resolution. For owners of the PS4 Pro, you can bump up the resolution and turn on some anti-aliasing, but it’s going to cost you in exchange for frame-rate problems. When this game doesn’t have too much going on, it can look absolutely beautiful, but if 60 frames per second is your thing, then I’d recommend leaving the game at the default setting. There’s a little bit of jagginess to everything, but it’s the price that console players expect to pay for performance. Still, it’s nice to see that the option is there. Regardless of setting, this game is pretty to look at, full of vibrant colors, and the Akira Toriyama art style is conveyed perfectly in the character models and enemies that you’ll be fighting. Everything about the Studio Bird aesthetic is proudly on display for a title celebrating 30 years of Dragon Quest. Koichi Sugiyama’s score is also a delight. The throwback Dragon Quest sounds, coupled with the modern score, give us a lighthearted tale when necessary, but packs in the drama where it needs to be. There’s also the option for Japanese or English audio to go along with the surprisingly good translation effort. I’d recommend playing in English just to hear how striking it is, plus it makes it easier to discern what’s going on in the battlefield. Characters like to banter while in the midst of battle, and while it’s cool to hear them through the DualShock 4’s little speaker, it doesn’t help that there can be accompanying text on screen, and things tend to get a little hectic.

One of my favorite changes in Dragon Quest Heroes II is the ability to change professions. The original game had you tied to one class, and if you wanted to experience what it was like playing as a hero with a different weapon loadout, you’d have to switch characters in the heat of battle. Now, you can simply visit one of the shops in town and change your class to one of the many available options. Maybe Alena was your favorite character in the original title? Well now your main character, whether it be Teresa or Lazarel, can dish out a flurry of punches on all the slimes, skeletons, and magii that stand in your way. Or maybe a giant axe is more your deal? If you decide you want to roll back to a standard warrior, you can return to whichever level you left off at, so thankfully you’re not starting from scratch when you swap back to an old class you played before. 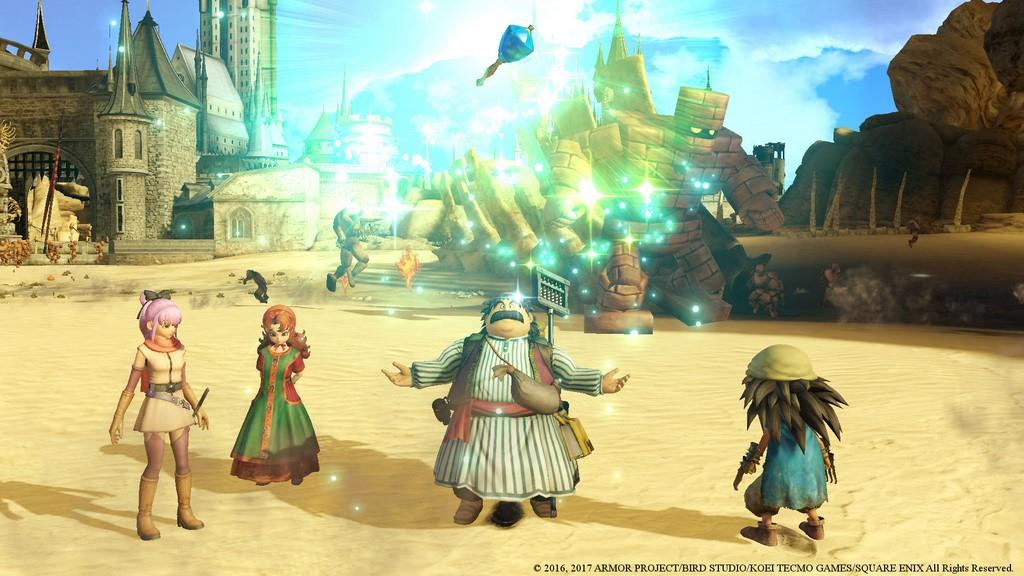 The roster has also been expanded with a few returning faces from the first Dragon Quest Heroes game, and a slew of new characters from other Dragon Quest games, this includes the portly merchant, Torneko, the wolf-riding Ruff, or the ton-of-trouble Carver. You’re going to be overloaded with characters in no time flat. As a side note, I love that they do the old school JRPG musical flourish when a new character joins the party. What’s kind of a bummer though is that the game spoils a fair amount of the surprise of who’s on the roster, just by looking through the game manual. The crew this time around finds themselves stranded on a continent split into seven countries. A prophecy predicts that should war break out, the land is doomed. Lazarel has spent the past few years living abroad in Harba, and a visit from Teresa happens to occur while their homeland, Dunisia, makes for war. From there it’s a whirlwind trip through the various kingdoms to try and track down who is responsible for upsetting the balance between the kingdoms.

Being a Koei Tecmo "Heroes" game, this means there’s plenty of hacking and slashing through endless hordes of enemies. Small baddies aren’t going to hold you too much, but when you start encountering some of the bigger enemies, that’s when you’ll have to employ a bit of strategy. Using spells and skills makes this one of the deeper titles in this style of game, and having a wide array of characters to use, plus the ability to play to your own style, makes experience feel a lot less linear than your typical Heroes or Warriors game. Though you do have a lot of the same square-square-square-triangle branching combos, there’s a lot more combo depth thanks to spells. 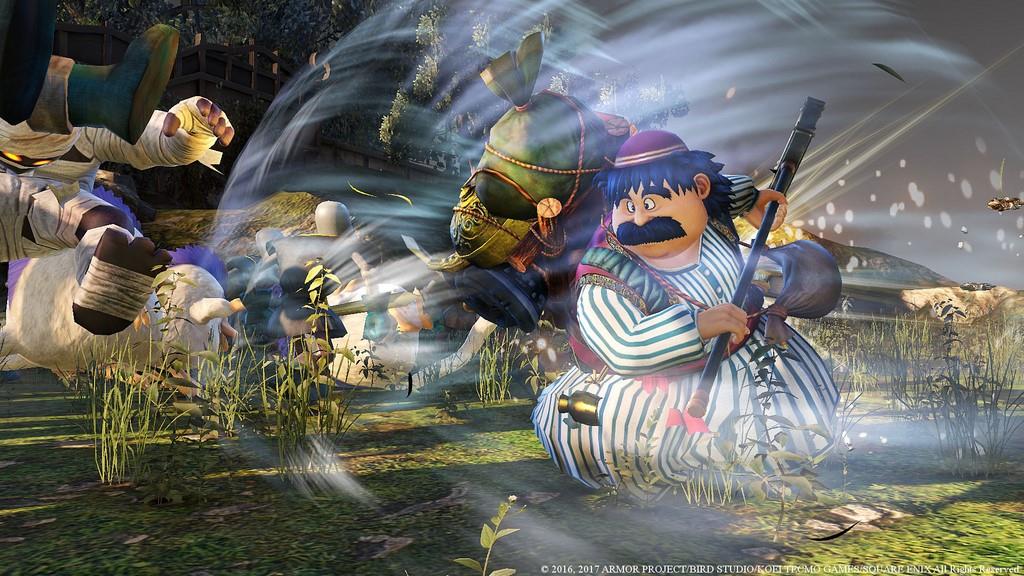 Speaking of depth, character growth has received a few tweaks as well. You gain experience, and when you level up you’re given skill points which can then be used to improve your stats or unlock new spells or special abilities. You can also equip accessories that can be used to buff some latent abilities or improve stats outright. The growth of these accessories is a lot more linear this time around, so it feels like there is a less of a guessing game to get some useful buffs out of seemingly useless trinkets. Then there’s the weapon proficiency system that lets you unlock additional skills the more you use a specific weapon type, and by convening with the Martial Master you’ll unlock addition Party Powers that give buffs to your whole party. This includes basic stat bonuses to additional bonuses like casting spells for free, or more medicinal herbs showing up as spoils from fallen enemies.

If you’re having a tough time during a particular battle, or if you’re feeling generous, then you can hop into the game’s multiplayer options. This allows you to create a private room to have friends join in on your adventure, or partake in The World Between Dimensions. Unfortunately all my efforts to play with other people were met with empty lobbies. I expect this to change when the game goes live, but I can’t really comment on how it all plays. 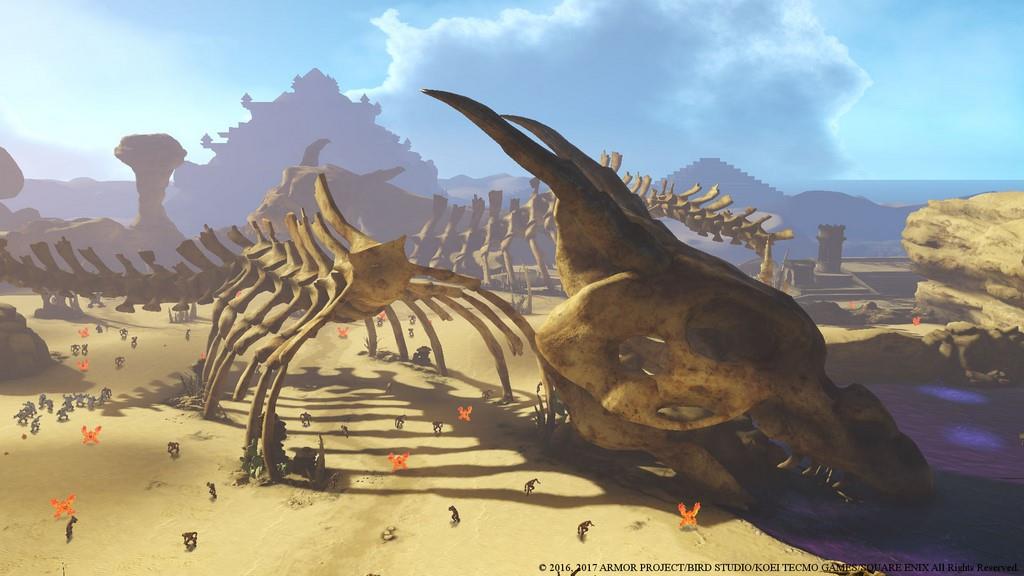 Dragon Quest Heroes II was kind of the perfect break that I needed from Persona 5 that wasn’t NieR: Automata. If that makes any sense. It comes without all the baggage that NieR has, and has just the right balance between a good hack and slash, and a good RPG. Considering how much I enjoyed the first game, I’m impressed that the changes have had such a positive impact on the overall experience. It’s been nearly two years since the first game came out, and almost a whole year since its Japanese release. But I can say that Dragon Quest Heroes II is every bit as exceptional as the first game, and then some. Especially since they dropped the excessively long name from the title.

If you played the first Dragon Quest Heroes, know that this sequel improves in just about every single facet. I'm impressed that Koei Tecmo didn't just phone this one in, but made some great changes that really enhance the overall experience.