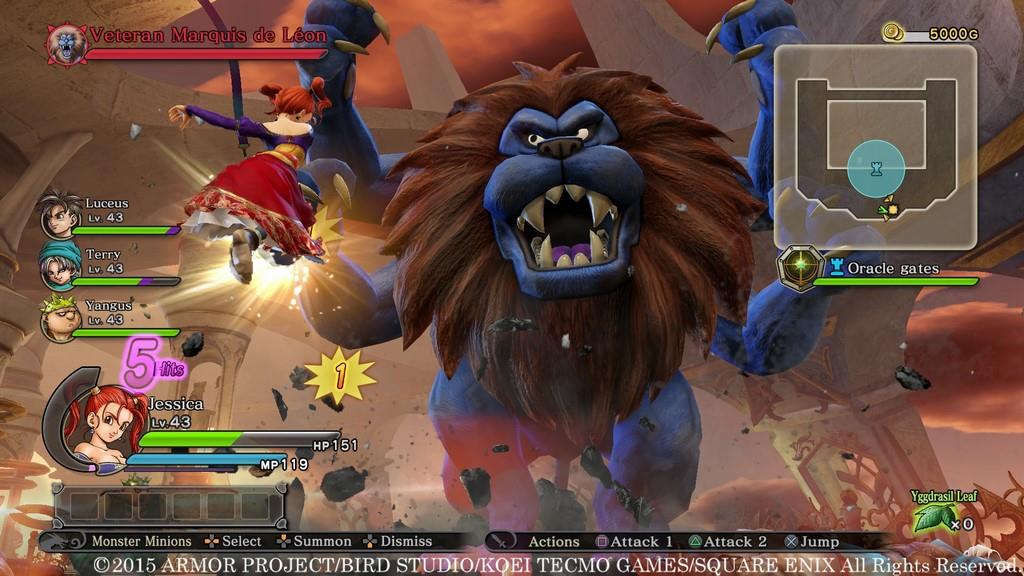 Dragon Quest Heroes: The World Tree's Woe and the Blight Below

Written by Matt Mirkovich on 11/24/2015 for PS4
More On: Dragon Quest Heroes: The World Tree's Woe and the Blight Below

I didn’t think I was quite ready for another Omega Force developed Heroes title. Having just reviewed Samurai Warriors 4-II, I’m a little hacked and slashed out. But when something with the pedigree of Dragon Quest comes a-calling, then I tend to listen. Dragon Quest Heroes: The World Tree’s Woe and the Blight Below (that’s the only time I’m writing the full name) is the latest in Keoi Tecmo and Omega Force’s wrangling of high profile IPs to fit them into the Warriors style games. For some, it has worked great, like Hyrule Warriors, and some, not so great, like One Piece Pirate Warriors. So where does Dragon Quest Heroes fall into this valley or varying quality? It actually turned out quite good, despite a couple of quirks, the Dragon Quest formula works for this style of game, and actually does a great job of melding the JRPG aspects of Dragon Quest with the Action RPG aspects of a Warriors title to form a cohesive experience with charming characters and a lot of heart.

Long has the Kingdom of Arba lived hand in hand with the monsters of the land. Monsters that we’ve all come to love, and or hate from the Dragon Quest series, which includes the iconic slime, to the flittering drackies. But a calamity has befallen the land, and the monsters have turned on their once friends, plunging the world into chaos. King Doric and his captains, Luceus and Aurora have thrown themselves headlong into finding out why the monsters have turned against the humans, and along the way they’ll encounter other characters from the Dragon Quest universe like Jessica and Yangus from Dragon Quest 7, and Maya and Alena from Dragon Quest 4. There’s a wide range of characters and each has a distinct play style, which goes a long way toward experimenting and finding that character load-out that really works for you.

Unlike other Warriors-styled games, Dragon Quest Heroes opts for a party structure. Each mission will require you to take four party members out into the field to dispose of the ones you once called friends. Who’s really the monster here? Well it turns out there is an actual evil force behind it, and it’ll stop at nothing to envelope the world in darkness. This means the odds are going to be stacked against you pretty much the whole way, but even I was surprised at how deus ex machina things got near the end of the game. I’m all for a good story, but when you have something literally called the ‘God bird’ that saves the party from certain doom just because, well, I’m no longer buying it. And this isn’t to say that the story is bad, but there is just a disconnect at times and it seems to be caused by some lazy writing.

So how about that hacking and slashing? There’s plenty of that to do in Dragon Quest Heroes. A typical mission will revolve around sealing up portals and defeating the enemies that opened them. You’ll be hitting a lot of Square and Triangle button as you swap between the various combos that exist for each character. Though if you don’t have the finesse for it, there is a simpler control scheme that works quite well. Spells are cast by holding the R1 button to bring up a sub menu and then a spell is tied to one of the four face buttons. This makes for some quick and snappy spell casting. You can break this game down into chapters based on the locale that you’re visiting. As you complete a section of the map you’ll move on to the next area, and it will culminate in a big boss battle. This game isn’t overly difficult, with the exception of a few end-game missions, but don’t expect to be able to wildly swing your sword and expect to succeed. There is some level of strategy that goes into completing these missions, and your party make-up has a lot to do with it. For one, characters that can perform area of effect attacks are invaluable in your group, and while each character has an attack of this nature, their effects differ in use. Alena for example has a pummeling fists type move that attacks enemies in a straight line as she belts out punches in rapid succession, while Bianca can leave an electric dome on the field to deal damage over time to enemies. By the end of the game I found my main group was pretty unstoppable, felling the mightiest of beasts with little trouble. 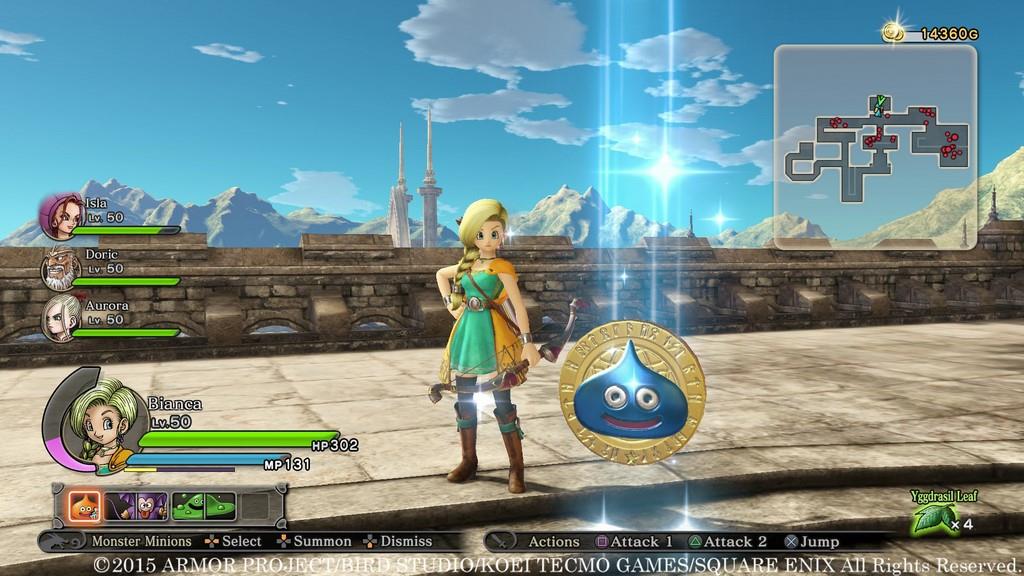 Character growth in this game is something I want to point out as well because I thought it was really well done for this game. Each character has a base set of attributes that you can unlock with skill points. These go into basic stuff like hit points, strength, and wisdom. Then there are character exclusive panels that allow them to unlock special abilities or stat boosts that are tailored to that specific character. This means that each character is going to grow differently but at a balanced rate. But by the time you reach the end of the game, you’ll know who your power team is.

There are also plenty of sidequests to complete as well. This includes taking out a specific number of beasts, clearing trials for weapons and skills, and collecting ingredients for crafting or for people on the Stonecloud, your massive airship. The only thing that kind of bugged me about the quests is that you can only have eight active at a time, but thankfully some of the quests that take a bit longer to do (like kill x number of y) can easily be navigated to by the helpful map screen that lets you know what monsters you’re going to encounter while exploring. So if you ever need to hunt for a weaker enemy, it’s easy to find them without constantly jumping in and out of different maps. There’s also the Alchemy Pot, one of my least favorite things to do in a Dragon Quest games. Find materials to craft items, unfortunately all of the relatively useful items are gated to be way later in the game, making them almost useless for the periods in which you would want them, like a charm that would up the experience gained. As you close in on the end of the game, story threads pertaining to your party members and their curious appearance on this plane will start to open as well, making for some good side stories. 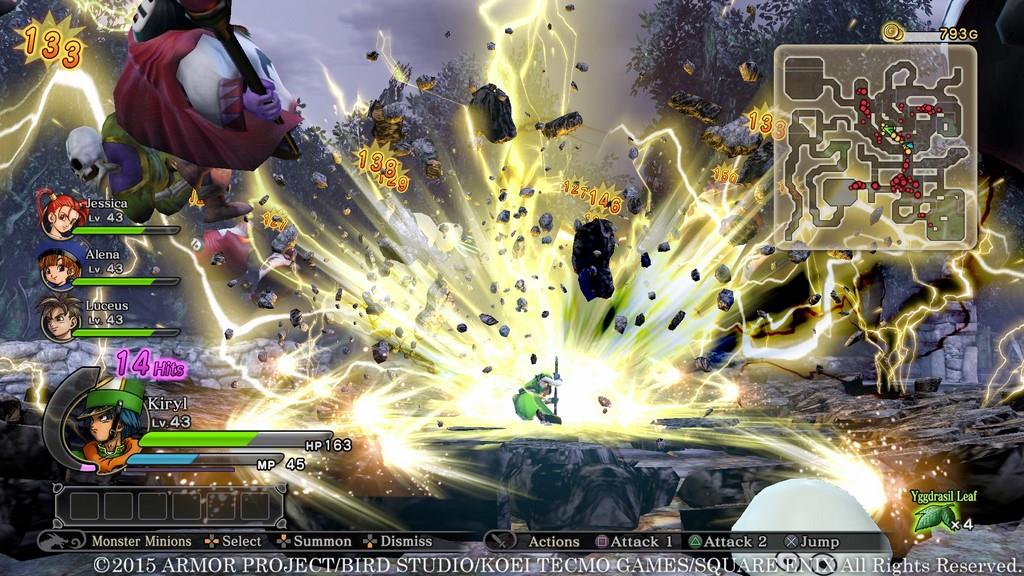 Visually you couldn’t ask for a better representation of the Dragon Quest aesthetic. The character designs of Akira Toriyama carry over perfectly, and gives this game life on the same level that Studio Ghibli did for Ni No Kuni. The frame-rate can take a bit of a hit here and there, but overall this game looks and runs great. The audio is also especially on point, using classical sounds that you’d expect to hear in normal Dragon Quest titles, like the spell cast sound effect, or the post-battle win fanfare. I’m not overly fond of the voice acting direction this time around, with the Western European accents for a majority of the cast it feels out of place, and is doubly so when reading the subtitles while hearing things in Japanese. The writing itself is perfectly on point, and Alena’s fondness for being overly wordy comes off as quite charming.

Dragon Quest Heroes has been a fun experience, it took a little bit of time to get rolling but after a few hours the game really opens up and becomes a ton of fun. It doesn’t get too difficult but offers plenty of challenge without feeling insurmountable. The gameplay matches the aesthetic perfectly, and does a good job of bedazzling players with cute character designs and adorable animations. When all is said and done, this experiment of taking existing IPs and throwing them into Omega Force’s engine has proved to be a great way to breath new life into this franchise. It’s a great hold over title while we wait for the next mainline entry in the Dragon Quest series.

Dragon Quest Heroes: The World Tree's Woe and the Blight Below is a wonderful effort by Koei Tecmo and Omega Force. The visuals, the gameplay, the audio, all aspects of this game come together to make an unforgettable experience that any fan of the Dragon Quest franchise should not miss.