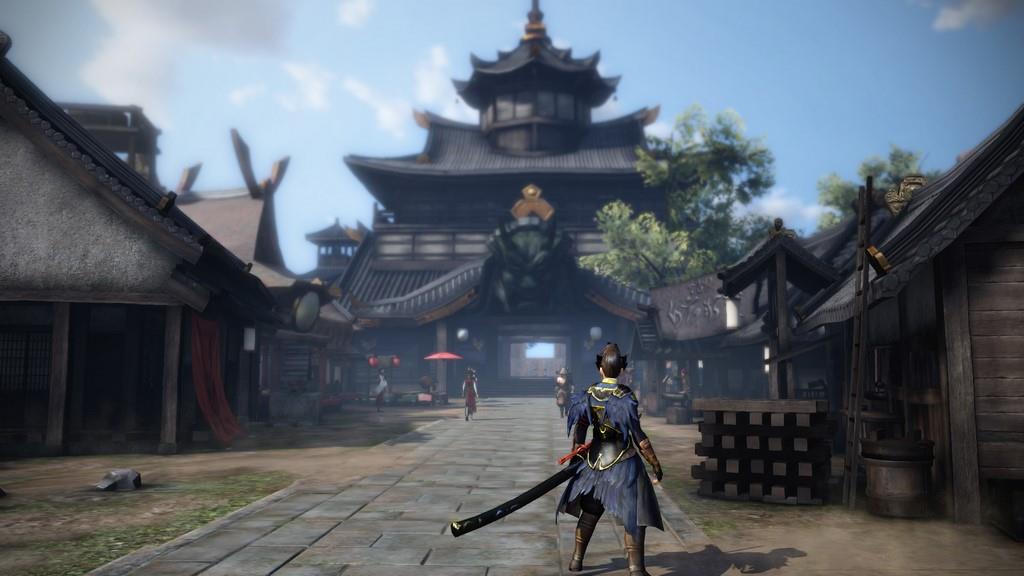 Oni are on the loose and it's your job to stop them! That is the gist of Toukiden 2, a monster slaying game from Tecmo-Koei and the sequel of course to Toukidenm or Toukiden: Kiwami as most people have played, which was an enhanced port of the original game. I will say right off the bat that I never played the first game in the series, but from what I have read, this game allows you to jump in without any knowledge of the previous series. Of course a game like this lives and dies by it's gameplay. Thankfully, the gameplay, while repetitive, is pretty fun.

The game starts out with a decent character creation system, and it's good enough that you could spend quite some time perfecting the look of your character. You also get to choose a starting weapon. From staffs to swords, bows and arrows, shields, chain whips and more, there is an interesting selection here to choose from. Don't stress yourself out when it comes to choosing a weapon because you get the option to collect, change and swap weapons soon after the game begins. Afterward you are recovered by a character called "The Professor" and learn that you have lost your memory. The Professor tells you exactly whats going on and... oh crap the worlds been destroyed and the last remaining humans seek harbor in this small town. You are then given the title of a "Slayer" to which you help destroy any Oni that you can find. Now go kill demons.

Of course it would be hard to talk about this game without mentioning the Monster Hunter series as this game is largely Sony's answer to that franchise. I have to admit that I am not the biggest fan of Monster Hunter and I have only played a little bit of the most recent game on the 3DS but I would think that fans of that series would find themselves having fun with Toukiden as well. Toukiden 2 however is a game by the company that makes the Dynasty Warriors games. The biggest difference between this game and other games by Omega, mostly the Dynasty Warriors series that they are famous for is that this game is completely open world. While you are in the town you have two choices as far as the action is concerned. You can either venture out on your own to slay demons, or you can accept missions from town as well. Of course you can also visit the various shops around the town to buy new gear and weapons with materials you find. If you love crafting, oh boy this is the game for you. There are a plethora of weapons, armor and other items that be crafted and upgraded and of course those will cost money and materials. This is one of those games, at least for me where I go to the shop, want to buy something new and, damnit I don't have enough materials, so it's back out into the open world to slay as many creatures as I can and come back to get that new piece of gear. 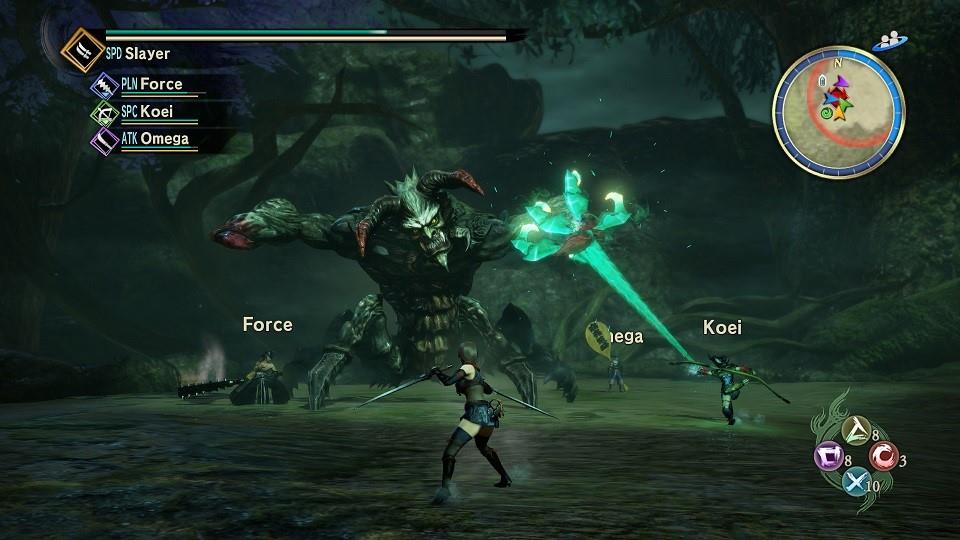 Since this is an open world game, there are plenty of side quests to keep you busy in your spare time. Some of these can be found while traveling the world itself, whether it's people who need help in the wild, or by visiting other towns, there is plenty to do here. You can also accept certain missions from the home base as well. Some of these missions are easier than others and have you doing tasks like killing a certain amount of demons in a set amount of time, finding certain materials, or by taking down the bigger boss like demons. Another cool side quest if you will is that some areas of the map are covered in the evil purple fog called "miasma". When you stay in these areas for too long, you will continuously start to lose health and energy and will die if you don't leave the area. The only way to get rid of the fog is to find and activate the shrines in the area.

Since you will be spending about 95% of your time in the game slaying Oni, a game like this lives and dies by it's gameplay. Thankfully slaying monsters is a lot of fun, especially with the use of your demon hand tool.  It acts like a grappling hook which lets you close the gap on enemies. The demon hand will also allow you to lock on to certain areas of demons since some of the have specific parts you need to attack in order to wear them down. Finally, the demon hand can stun enemies as well. If you played Freedom Wars before, the idea here is similar where you can target certain body parts to be able to bring down the giant demons, allowing you to then unleash a barrage of attacks at them before they regain their composure. The demon hand is also especially useful when you get annoying enemies that are constantly on the move. You also won't be alone in your demon hunting adventures. There are a number of companions you can bring with you on each mission which all excel in certain areas like speed, or long ranged attacks. Thankfully, your companions are smart enough and can hold their own to the point where you don't feel like you need to babysit them. Actually, they may be a little too smart. Sometimes when out in the wild, your companions will all find demons, and the fight will be over before you even join the fight. This comes in handy when it comes to the big demon fights. If you need to take a breather, you can somewhat sacrifice your companions by letting them take care of the demon for a bit while you regain your health. This is also a good strategy because some of the bigger demons have insane amounts of health and some battles can tend to drag on for way too long. 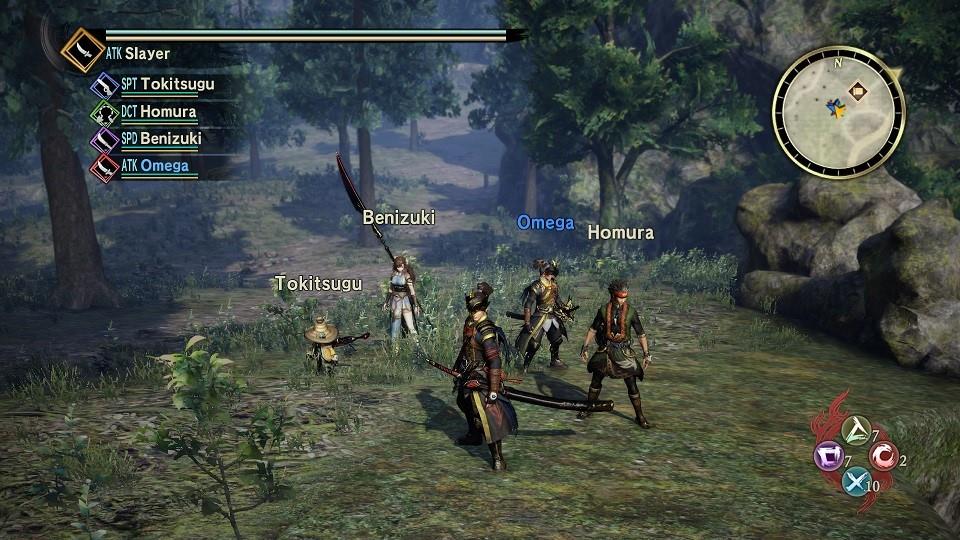 Toukiden 2 also has a unique leveling system where your character doesn't level but your Mitamas. Mitamas are souls of past warriors that you can bring with you into battle and each one has their own set of abilities that you can use in battle. Some of them focus on attacking, some defense, For instance, you can activate a skill that lets you dish out huge damage in small bursts or one that boosts your defense. These abilities do have cooldowns and you can only use a certain amount of them before having to return to a town to refill them.

All in all Toukiden 2 is a fun monster slaying game although it can get repetitive at times. Roaming around the open world and defeating any demons you find in your path is fun, the missions are good enough to keep you occupied, but the repetitiveness comes into play when you get to the larger demons. Some of these fights can last quite a while. One fight took me about 10 minutes to complete. That said, the game still is fun and should satisfy those who are looking for a Monster Hunter type game and may not have access to that series.

Toukiden 2 can get repetitive at times with battles that go on way too long but it's still a fun monster hunting game that fans of that genre should be able to enjoy.