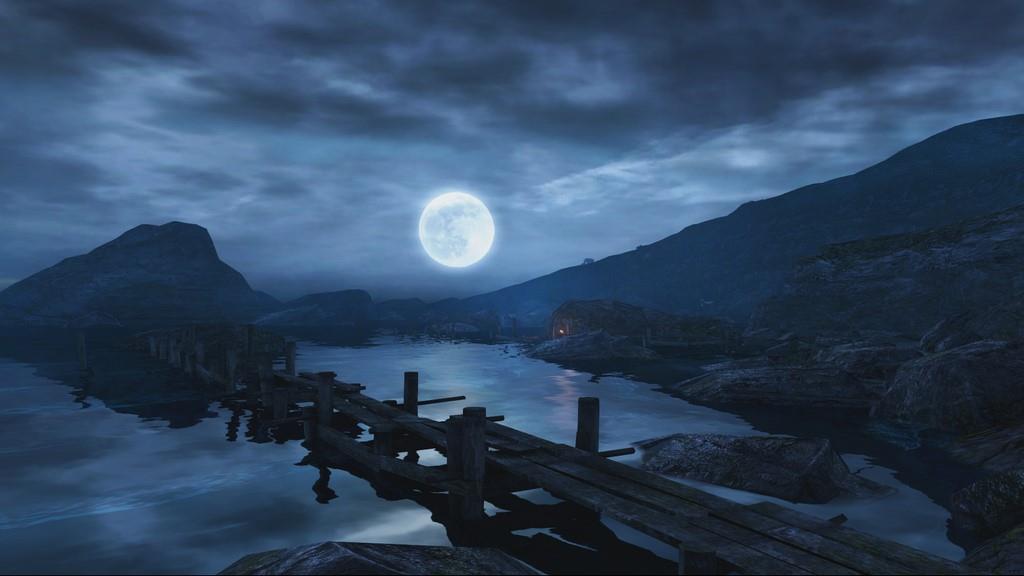 Written by Randy Kalista on 9/21/2016 for PS4
More On: Dear Esther: Landmark Edition

Dear Esther: Landmark Edition is a remake of a remake of a Half-Life 2 mod. It is a walking simulator. The first so-called walking simulator, actually. When it came out as that humble mod in 2008, it unknowingly became the granddaddy of story-first video games such as Firewatch, The Stanley Parable and Gone Home.

That is, Dear Esther is an exploration game. Its primary game mechanic isn’t pulling triggers, but triggering narrative. Dear Esther has no guns, no puzzles and no jump button. You can’t open things, close things, or climb things. You can’t press X to not die, press X to pay respects, or press X to Jason. Stop searching for a health bar, an inventory screen or a mini-map. This is a story you walk through.

After that 2008 mod release, Dear Esther was fully rebuilt for a 2012 commercial release on PC. It’s now 2016, and developer The Chinese Room opened up the game to PlayStation 4 and Xbox One. The artwork has been remastered, the soundtrack has gotten live instrumentation, and the island now has directors’ commentary placed about—and the commentary is wonderful.

The commentary is wonderful after you’ve played the game proper. Because even though Dear Esther was the first of its kind, it’s still, eight years later, one of the best of its kind. So, of course, play the game before you play the commentary.

You begin on a Hebridean island off the coast of Scotland, the sea behind you, an abandoned lighthouse before you. From this moment, the narrator’s sad tale begins in earnest, growing slowly more surreal as you traverse the island, making you increasingly unsure whether this is all happening, this has all already happened, or if this will all continue to happen again and again. Welcome to the ghost story. Though not a traditional ghost story. Not the kind you’re thinking of anyway. Maybe there was somebody standing up on that cliff a moment ago. Maybe there wasn’t. Who knows? 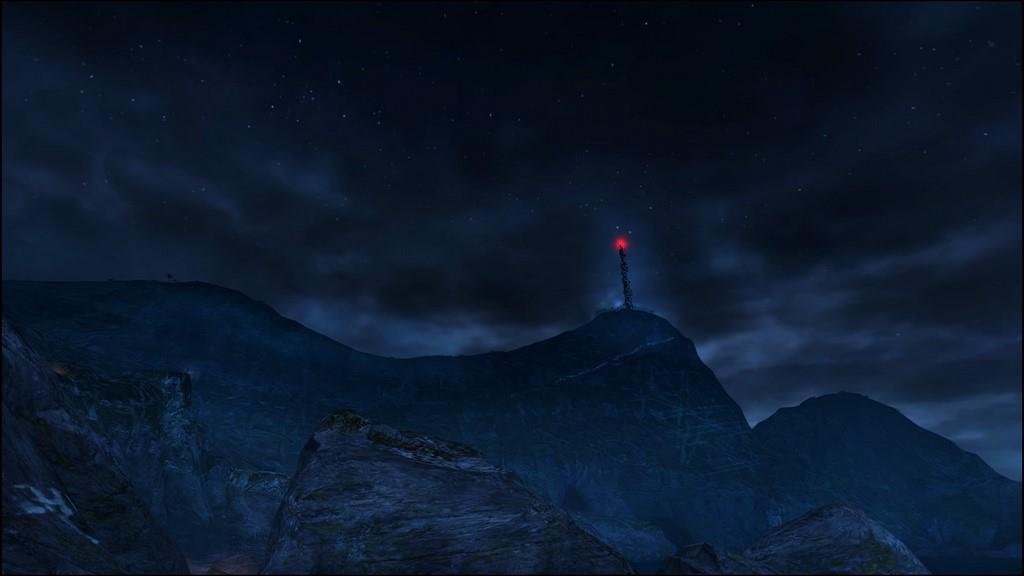 Sometimes the island’s topography is comically aligned with its singular, culminating purpose: to get you to the radio tower. From so many places on the island, the red light atop that tower slowly winks its red eye at you. Sometimes the tower appears between the valley of two hills. Sometimes from around a craggy cliff. Sometimes beyond the mouth of a cave, looking out. You don’t know what you’ll find there. You just know you have to get there.

The music is a second narrator, a second voice. Music is possibly even the voice of the island itself. A lonely plunking at a piano. A plaintive cry from a violin. The melancholic lower notes of a xylophone. It may even be revealing Esther herself, in song form. Esther is the tragic side of this tragic tale. Well, one of the tragic sides. There are many. You’re one of the tragic sides, too. There’s no way for you to escape being one of the main characters in this this parable of regret.

So you walk the island. It’s not an open world, but you can certainly miss stuff along the path. It’s not a roguelike, but there are randomized storytelling elements placed in (or removed from) different locations. There are even some pivotal moments that reveal themselves in the narration during one playthrough, but not in another. It’s kind of nuts for a short, dense game that should’ve been a one-off from the get go. But subsequent playthroughs not only make parts of the story more apparent through repeated exposure, but some literal pieces and parts of the story may show up in different places—or not at all. 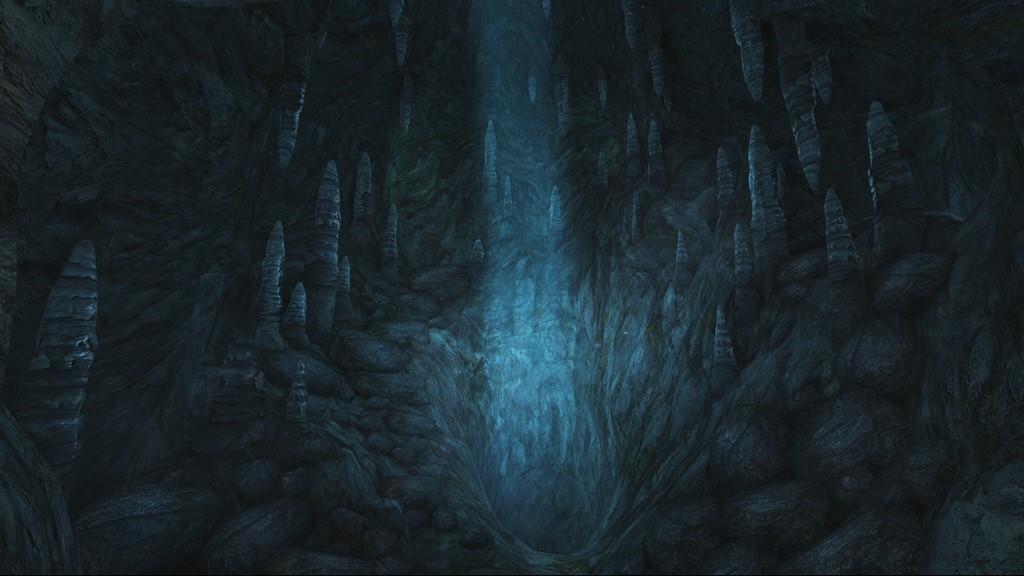 There are several moments that arise when you’re looking out over, say, barren cliffs. Their hard edges sometimes call to a video gamer, “Fall down. Fall down this cliff.” But Dear Esther makes you feel vulnerable to such antics. You’re not here for the parkour. You’re not here for the double jumps. You’re here so you can be rooted into another man’s cautionary tale. It doesn’t feel right to be rough housing around this little island. I said you can’t “press X to not die,” but are you really alive? I said you can’t “press X to pay respects,” but what are these urns and ashes doing scattered about the island? And I also said you can’t “press X to Jason,” but you are looking for somebody; would shouting be enough to find them?

An island which, by all means, should feel secure, serene and unhindered actually owns an embarrassment of garbage. The place feels unsafe. It’s unusually dark above ground, and unusually bright underground. The fringes, the beaches, the tide pools, the docks, are polluted and scarred with rust and ruin, debris, decay, flotsam and jetsam. Even then, amidst the trash, there are things that simply don’t belong. Their placement is too uncanny to be an accident or the cast-off of some litter bug. You haven’t seen any cars, so where did that steering wheel wash up from? You haven’t seen any doctors, so what’s that syringe doing here? In fact, you haven’t seen another living soul, so who lit all these candles? Who carved lines into the cliff walls? Who painted these circuit boards, chemistry symbols and biblical verses all over the place? 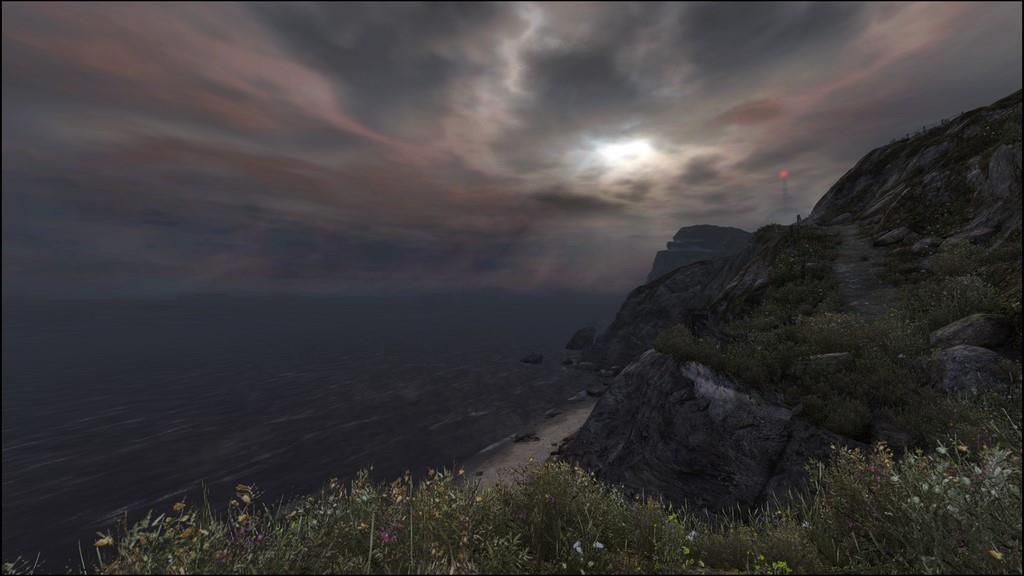 The geography of the island is made even more real by the pace of your steps. There’s no run button. In fact, push any button you want, and it will likely only zoom your field of view. Right trigger, left trigger, X button, Square button: all of them do nothing except draw your eye closer to the details around the environment, to the only things that matter. Yet you don’t want to rely on farsightedness. I’ve played through Dear Esther three times now. There is one particular detail I’d seen from only a few feet away before, but I’d seen it twice. I took a screenshot, but I didn’t approach any closer than that. On the third time, I walked up to it and stood over it. That’s when something very different happened. That’s why you have to get close to things, all while taking in things from far away, too. As much as Dear Esther pretends to be some kind of still life, there’s always something happening at your feet, in the distance, or even in your head.

The wind blusters loudly, its singular occupation to make you flip up your collar and pull your coat tighter around you. And sometimes you’ll be utterly disarmed by some line by the narrator. You’ll hear something like, “You have been rendered opaque by the car of a drunk,” and have absolutely no idea what to do with it. How to ingest it, how to file it, how to regurgitate it as a moment in the story. Poetry, man.

It’s important to take moments, mere moments, to see what’s been framed from any one point of view. Walking to the end of a rickety pier renders one scene, looking through the square end of a shipping crate renders another. Seeing the radio tower peeking at you from around a cliff when you stand at one edge of a rocky shaft in the ground; seeing a house on a hill appear when you look from the other side of that rocky shaft. It goes without saying that speedrunning Dear Esther is the quickest way to waste your time and money. 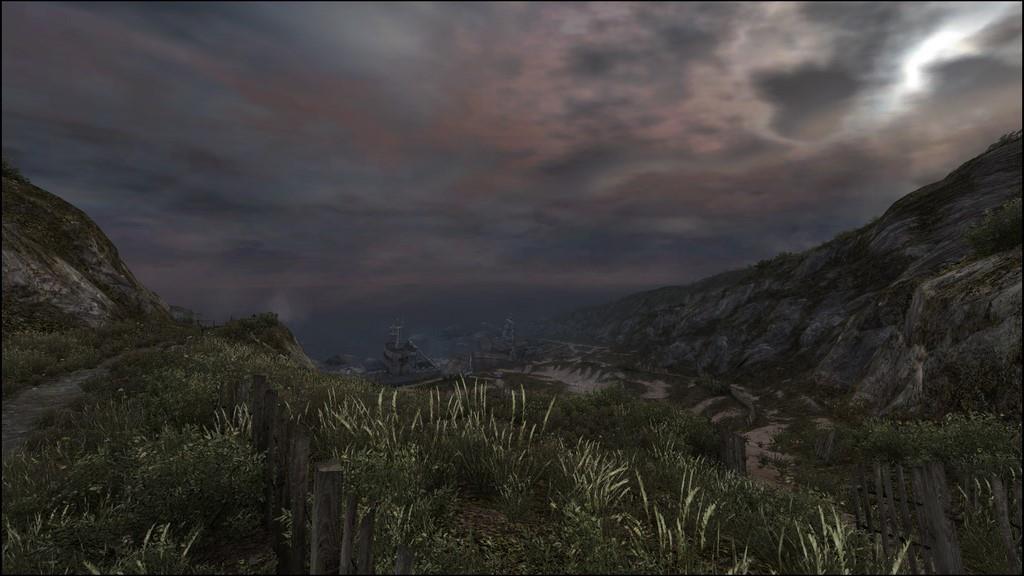 Play Dear Esther if you want to see how one game, one lonely little mod, spawned an entire genre of exploration games. And definitely walk through the developers’ commentary. They have so much to say that you’ll often have to stop and twiddle your thumbs for a bit before hitting the next commentary bubble, but it’ll open up Dear Esther in ways you probably thought of, but couldn’t fully articulate, or just couldn’t quite put your finger on.

There’s a reason why Dear Esther spawned the “walking simulator” genre. It was the first, and is still one of the best, exploration games you can play. On your second playthrough, however, the directors commentary is why you're really here.