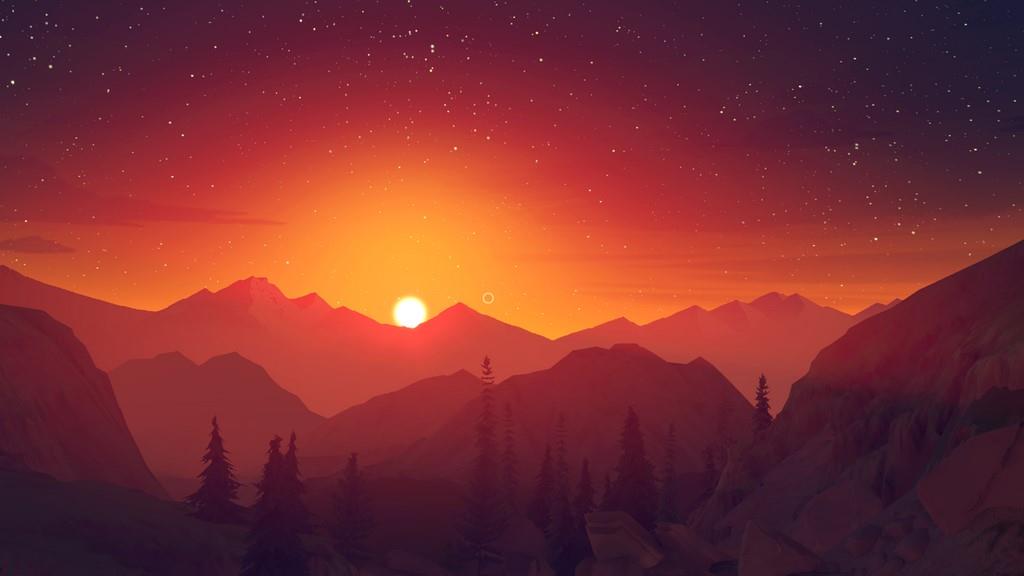 The idea is romantic. A solitary summer job in a fire lookout tower deep in the woods? Some days, that sounds like a dream come true. It’s less of a dream come true and more like a last resort for Henry, though. What’s Henry running from? His career? His marriage? Firewatch plays like a detective novel, where sketching out a character profile happens over walkie-talkie exchanges, red herrings scatter themselves across a picture-perfect landscape, and the wedding ring around Henry’s finger could very well prove to be the smoking gun.

Firewatch is set during such a specific time and place that it’s impossible to proceed without addressing that first. You’re in the Shoshone National Forest. The Yellowstone fires of 1988 are about to go off. Your job is to not let your world burn down around you—and I’m not talking forest fires anymore.

You are Henry. Due to a series of unfortunate events, which play out in a minimalistic text adventure during the prologue, Henry takes on a summer job manning a fire lookout tower. The job is supposed to be quiet. Supposed to be lonely. The great outdoors should give him some time to clear his head. That’s why he took it. Henry’s got a lot on his mind, and the wedding ring around his finger is starting to cut off his circulation.

Here’s where we tread a fine line between thoughtful game criticism and outright spoiler territory. Firewatch is a story-first game. That means discussing the finer points of the narrative is a no no. Yet we’ll only get so far if we discuss gameplay, game mechanics, yadda yadda. Because this is a first-person adventure story, the drama opens up during conversations, not combat; the tension strings itself along leisurely hikes, not spawn points; and you look over your shoulder because this is a thriller, not a shooting gallery.

So-called “walking simulators” are the offspring of point-and-click adventures and interactive fiction. It’s the natural evolution of those two genres, and so, without any cynicism or pejorative tone in my voice, I can attest that Firewatch is a high-water mark for adventure games, joining The Walking Dead and Life Is Strange for top honors in this category. 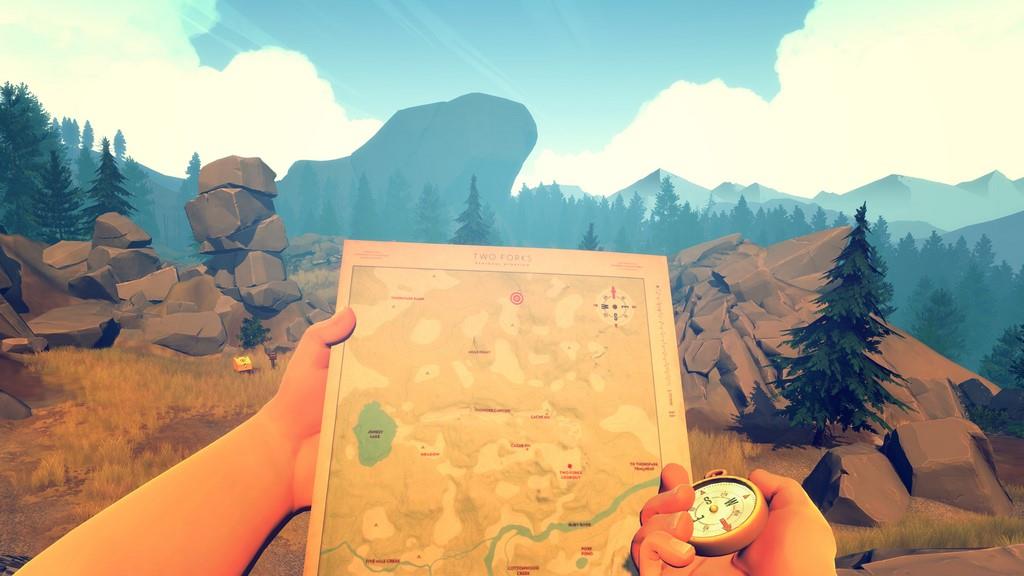 So, OK, let’s talk gameplay mechanics. There’s a long summer ahead, and you’ve got a job to do. The job is basically whatever Delilah your boss says it is. This may involve confronting drunk, skinny-dipping teenagers down at the lake. This may involve spelunking down a sealed-off cave that’s got a secret it doesn’t want to tell. This may involve figuring out who just trashed your lookout tower while you were out on a hike.

I’ve said too much.

You won’t hear dark jazz playing in the background, but Firewatch is a detective story. Tracking down an arsonist would be too obvious. But there’s more to these woods than meets the eye. Sure, it’s a national park, and there are hikers crawling all over these forested hills. But there’s someone else out there with malicious intent, someone screwing with you, Henry, specifically, and your boss, Delilah, is your only lifeline out here in Ol’ Shoshone. 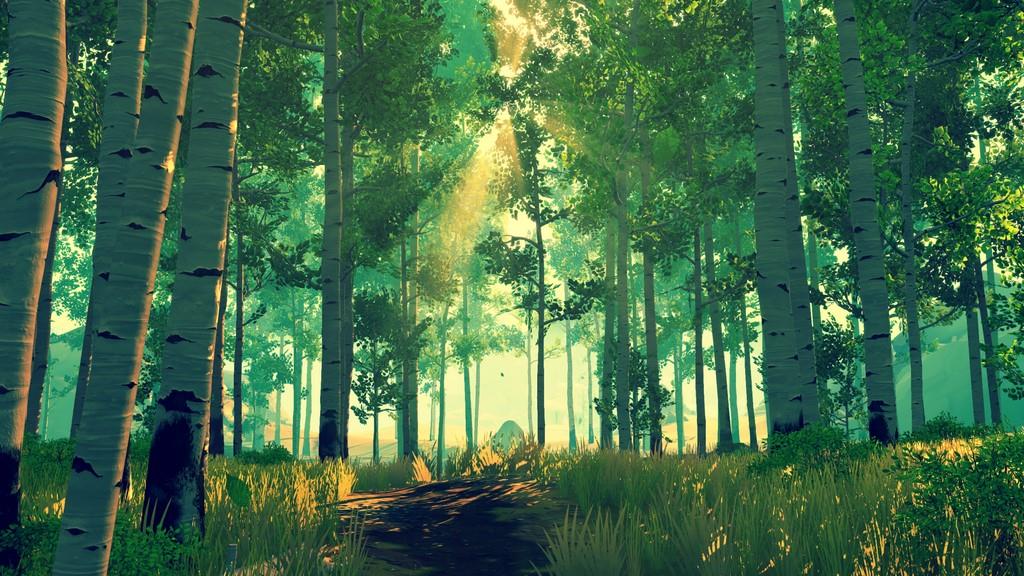 The walkie-talkie you carry makes Firewatch more intimate than you’d expect. The voice acting coming in over the radio waves makes me wonder why voice acting sounds so stilted in other video games. Henry can be a bit of a blunt instrument one minute, and a sharp-eyed sleuth the next. But his mood swings make sense. Delilah can be a femme fatale in one breath, and a rocksteady supervisor the next. And you may rely on her solidarity. All of this is conveyed with a sweet intonation here, a punchy joke there, a snappy retort or disgruntled silence in between. You often have branches to what you can say. But these branches, more often than not, affect Henry’s internal makeup more than diversifying the storyline. Usually, your response tells us more about who Henry and Delilah are, not how many different game endings you can come up with.

On par with the radio-play-quality voice acting, though, is the art style. The palette runs from warm sedimentary rocks to cool aspen shadows in the span of a sunrise. The minimalist lines give your eyes an attention-to-detail they may not be accustomed to. The fading-in-the-distance treeline contrasts with the courier new font tapping out of Henry’s typewriter. And Henry’s eroding sense of self is matched only by the eroding rock slides in the Wyoming wilderness. 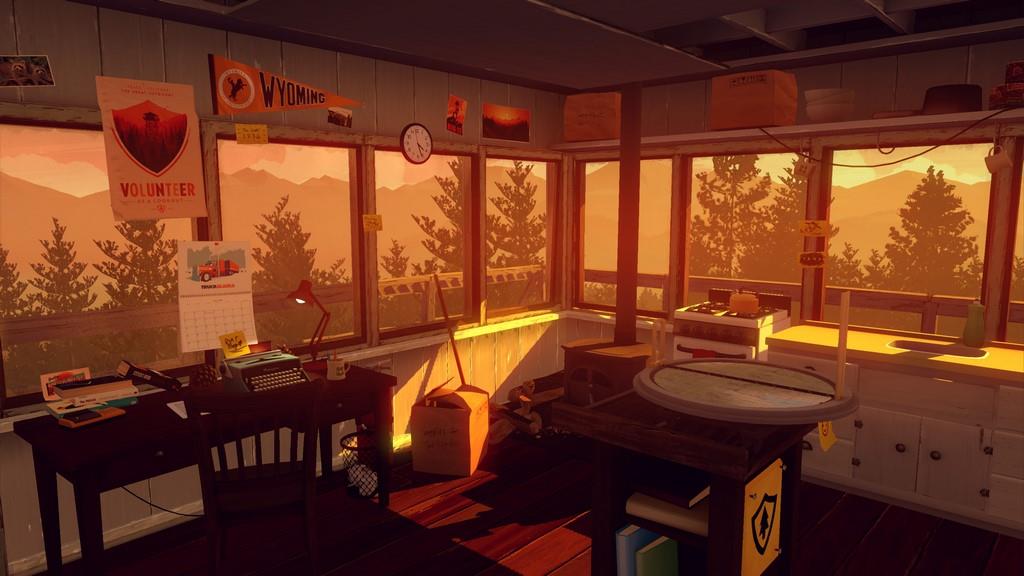 The voice acting and art style are matched only by the soundscape. A pop song on a boombox feels like a noise pollution violation matching—or exceeding—the beer can empties strewn about a campsite. The bird calls and other sounds of nature can’t be anything but authentic recordings from unpopulated woodlands. Then, when you throw in the occasional song, you feel an emotional audio manipulation hearkening back to Red Dead Redemption and that first ride into Mexico. It’s the deliberate and sparse use of music that makes it contribute so much more to the story than I expected.

Firewatch smolders even after you turn it off. I finished the game a week ago and I’ve let it continue sinking in. Letting the lessons on friendship sink in. Letting the solitary confinement sink in, especially when so little of this job felt solitary. It’s like I could feel the What I Did Last Summer essay penning itself in my mind, even as I was playing it; I could feel the film developing into Throwback Thursday posts on Facebook, even before I shut the game off.

It’s cliche in adventure game reviews to call out the setting as the "real main character" of the story. It's not. Henry and Delilah nail their performances. But I’ll tell you what: I now feel nostalgic for a place I’ve never been. I’m sure Shoshone National Forest is lovely, but it’d still be hard to beat Firewatch artist Olly Moss’s paintbrush. And I’m sure there’s plenty of introspection to be had were I to lace up some hiking boots and head out to Wyoming myself, but I’d be hard pressed to come up with more dramatic tension than in Henry and Delilah’s conversations. But, come to think of it, it would be ridiculous to play Firewatch on mute, because those walkie-talkie convos are now, in my mind, stamped into the landscape every bit as much as the footprints I stomped into the hiking trails between the lookout towers. 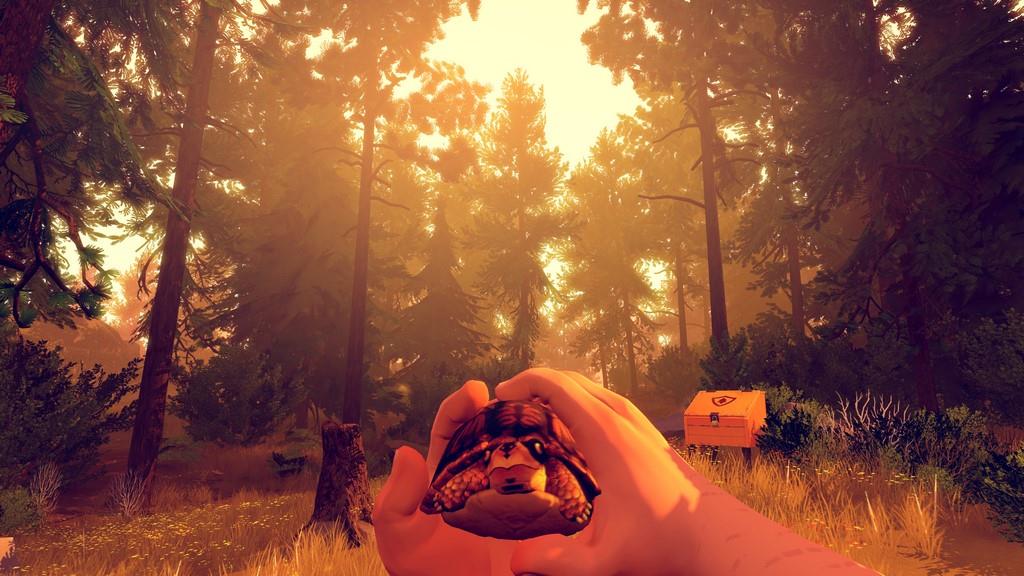 You won’t see the ending coming, though. Yeah, you’ll see events coming to a head, the narrative ramping up to something nerve wracking. But Firewatch throws enough red herrings your way to make you comb over every clue like it holds the key to the smoking gun. And then, once you think you have to dismiss all those loose ends and dead ends as a waste of time, you realize that they all played an important role in Henry and Delilah’s mounting paranoia since day one on the job.

Firewatch is a short game. There’s no getting around that. If you start it on a Saturday, you’ll have all Sunday to think about the ending. It may be hard to replay, too. It tells such a specific story, and I’ve have made so many natural, unthinking conversational choices, that going back to deliberately say ‘A’ instead of ‘B’ feels like I’m cheating my memory of that summer of ‘89. Whatever Henry was running to or running from probably won’t be found in a second playthrough. Or maybe it will. I have to go back.

Even better than presenting its dangers, Firewatch presents the threat of danger. This is no feel-good summer beach read; this is a brutally beautiful and fragile story of people running from their problems—and problems running away from any tidy conclusions. This is the video game equivalent of a page turner, and adventure games have rarely been in finer form.