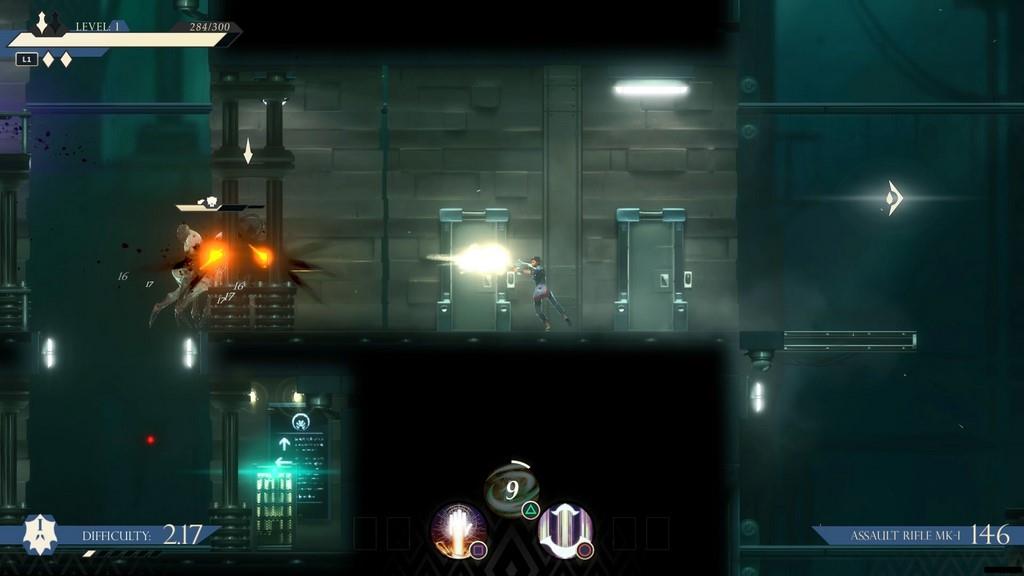 There are a lot of 2D action-platformers on Steam, to the point that the preceding sentence is rather pat. Early access is overflowing with the buggers, and I’ve noticed that the consistent theme is unrelenting action and merciless, hardcore difficulty. A lot of developers grew up with Sega Genesis side-scrolling beat-em-ups and shooters so naturally they want to make their tribute game exactly like that, but typically self-referential and needlessly more difficult, probably because the playtesters got bored.

You see complex Metroidvania 2D explorer-adventure games a lot less often, with the occasional brilliant exception like Axiom Verge. But what about a hybrid of sorts? An adventure game that has exploration elements, but also fast-paced shooting action and a difficulty that tempers itself based on your performance? That’s essentially what you have with a game like studio Dreadbit’s Seraph.

The game concerns the titular Seraph, an ethereal goddess who has been forced to incarnate, weakened and imprisoned in a massive facility for a very long time. Upon regaining enough power to free herself, she also inadvertently opens a gateway to the netherworld, and demonic creatures come streaming into the facility. With the help of a disembodied AI, Seraph must escape a massive prison that was built explicitly to contain her, and fend off the demons as she goes.

Perplexed? Don’t worry—it’s an admittedly convoluted setup for a fairly straightforward game. What matters is that the controls and signature acrobatic movement of Seraph are easy to pick up and understand; the game has a very intuitive opening with a little too much talk, but before long you’ll be leaping, vaulting and wall-jumping effortlessly, while blasting demons at the same time. This is not a game preoccupied with precision aiming or platforming; it’s designed to produce a fluid gameplay rhythm the same way a game like Doom or Shadow Warrior would.

In fact, there’s no aiming involved at all—Seraph auto-targets the nearest enemy with whatever weapon she has equipped. This is especially cool to watch when she’s wielding the default dual-pistols. Although weak, the guns have infinite ammo and holding two of them lets Seraph deal damage to two attackers at once. The focus isn’t on aim, but maintaining in-air mobility and vaulting or wall-kicking off the environment in a way that gives you a clear line of fire to as many enemies at once. 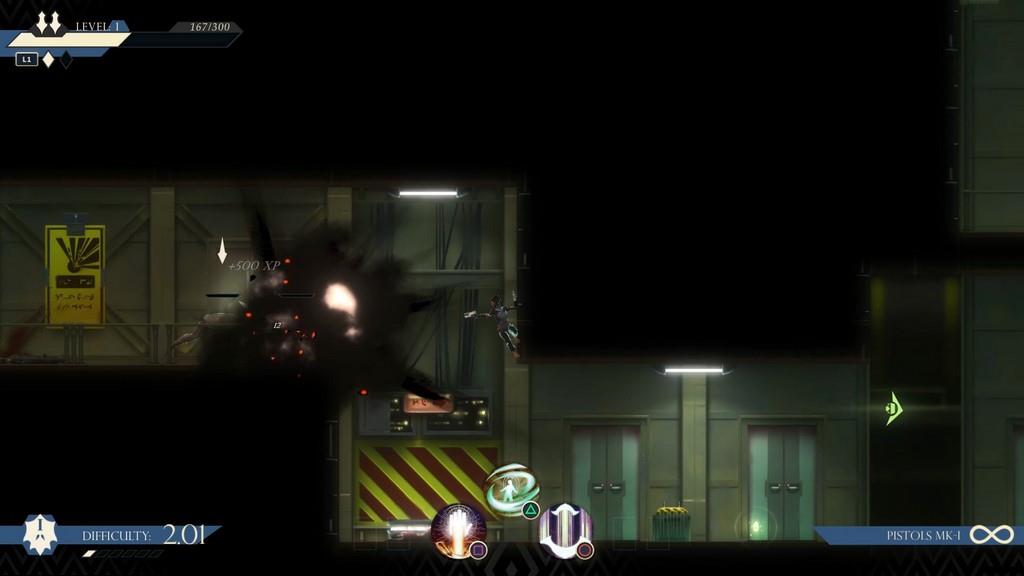 As such, the level design is reminiscent of old 16-bit vertical platformers. There is a plethora of platforms stacked on top of each other, with vertical shafts allowing wall-kick elevation. The demons have the ability to leap great distances in order to follow you, so it’s difficult to scum most of the enemies in this game. The early demons, although looking like something out of a creepypasta photoshop contest, don’t pose too much of a threat. They telegraph their attacks and die after a few hits, but a mob of three or more can be a nuisance. The bigger enforcers and lords however can knock huge chunks off your health in short order, so you’ll want to use one of Seraph’s “miracles” to deal with them.

Miracles are basically just special moves, for example a boomerang-style energy attack, or the ability to perform a holy finisher on a weakened enforcer. These powers can be upgraded with the mana fragments scattered throughout the levels, and accessing secret rooms and collecting power shards allows you to unlock new miracles and craft other miscellaneous upgrades. The crafting system is surprisingly robust, but then again that’s an expected feature in many genres these days. Seraph’s most refreshing innovation, however, is its variable difficulty.

Unlike most games that have a set handful of difficulty levels, Seraphs starts at about “medium” and scales from there. If you get killed the game will knock a significant portion off your life bar, but it will also make the enemies less aggressive and their attacks won’t hit as hard. The game even keeps a running difficulty metric on the pause screen. In an indie scene that seems to indulge in needless difficulty just for the sake of it, it’s nice to see an action-platformer that plays fair for once. 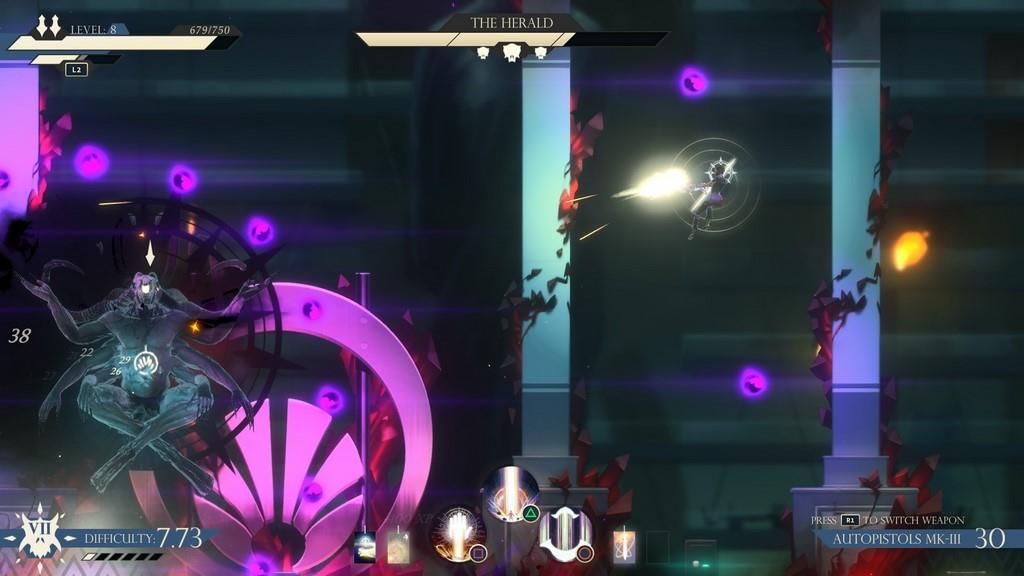 Unfortunately, the scaling difficulty is Seraph’s only standout feature. Don’t get me wrong, it’s an incredibly solid game but after the introduction it just isn’t all that compelling. A lot of this has to do with the level design—namely, it’s pretty much all the same. There’s some creative platform and level structure, but the color palettes are fairly homogenous. You can grab new guns from vending machines, but they run out of ammo quickly and are best saved for tougher demons.

The best Metroidvania games keep you playing by having new, exciting environments to explore. Some of the best games in this genre get flack for recycling the same jungle, ice and desert levels over and over, but at least there’s some environmental variation. Seraph consists of mostly the same gray corridors, shafts and atriums over and over again. To be fair I didn’t play Seraph to the end so maybe there are some crazy levels toward the finale, but from what I’ve seen the game could use a bit more color to break up the monotony. 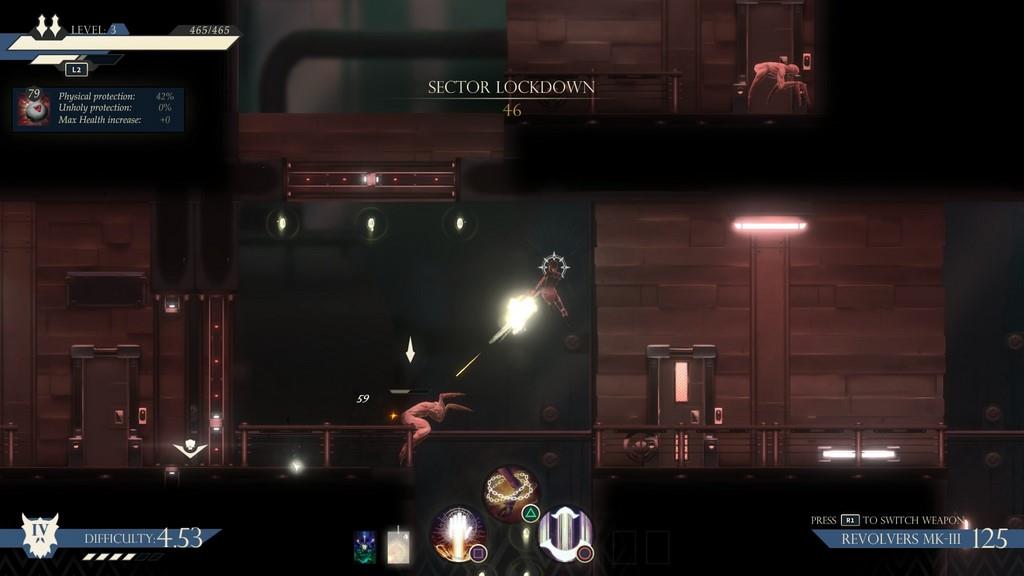 This is frustrating too, because the sprite work is subtle and evocative. There are some pretty cool little details, like the way Seraph’s eyes are only about two pixels tall but you can clearly see them glowing yellow when you leave her idle. As I said earlier, the demons are appropriately otherworldly and creepy in their own right. It’s just a shame that this attention to detail didn’t get into the levels themselves.

Seraph is ultimately a frustrating game. It has some great ideas but the developers just didn’t build enough on the framework they established. Early on in the game I felt like I was in for a complex adventure I could sink my teeth into, but in the end it feels like a lengthy beta. I would love to see Dreadbit push their design further in a sequel. The combat mechanics are tight and satisfying, and the lofty, myth-infused world they’ve created is intriguing. Next time, they just need to show off more of it.

Seraph has a very solid foundation but lacks the level variation and art variety to get truly addictive. That said, the combat is thrilling and the scaling difficulty is creative. If you can get this one on sale, I’d definitely pull the trigger.