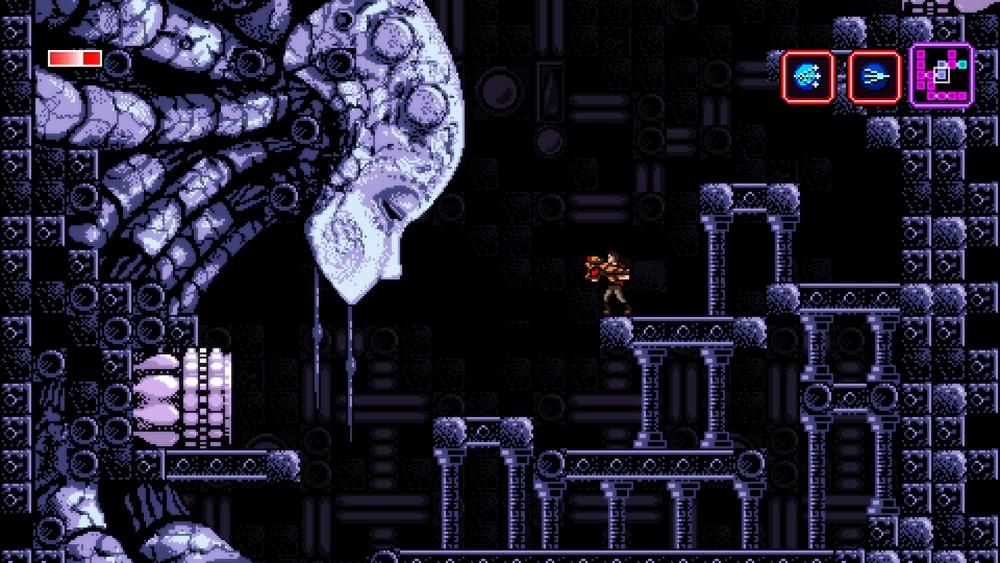 Although they were a little over my head, I loved the action and exploration titles that were available on the original Nintendo when I was a child. Games such as Castlevania, Blaster Master, Metroid, and Rygar we the “epic” adventures that sucked me in while others got hooked into the RPG genre. I preferred their means of pitting you right into the action and keeping things moving rather than the slower, methodical approach of games like Dragon Warrior and Final Fantasy. It appears as though Thomas Happ enjoyed them too as he has spent the last five years building a game that is both an homage to those great games as well as an advancement of the Metroidvania genre. Those five years of evenings and weekends spent working on his masterpiece is now complete as Axiom Verge is ready to launch on the PlayStation 4.

You play as Trace, a scientist who is involved in a catastrophic accident while working on an experiment in his labs. The resulting explosion causes the building to crumble on top of him, pinning him and leaving him unconscious. The blackout doesn’t last long though as Trace wakes rather quickly but finds himself inside of a strange world. Everything is foreign and alien to him, with the exception of a soothing, guiding voice that fills his head. Trace is once again trapped, but this time in a world that appears to be at war; a war between creatures and beings he doesn’t understand or recognize. The voice quickly guides you to the location of a strange gun that is unlike anything you have ever seen. It is here that you realize that you are going to take a side in this battle, whether you like it or not.

It is a good thing that your strange guide has helped you arm yourself because you will soon discover that you aren’t exactly welcome in this alien world. There are a variety of creatures and even environments that will identify you as a threat and do everything in their power to eliminate you. Luckily, you have at least one friend and using their help and your determination, you might just survive this trip and help restore a peaceful balance to this world.

The crux of the Axiom Verge experience, as with any Metroidvania game, is exploration. There is a lot of combat, including some absolutely fantastic boss battles against gigantic behemoths, but searching and uncovering every inch of the game world is your true goal. Be warned, there will be a large amount of backtracking involved in your quest. You will spend a lot of time exploring a new area only to find a new tool or ability that will require you to go back and retrace your steps in earlier sections of the world. Each new ability or advancement that Trace uncovers will allow him to access more and more rooms throughout the map. It takes time though and a bit of patience. 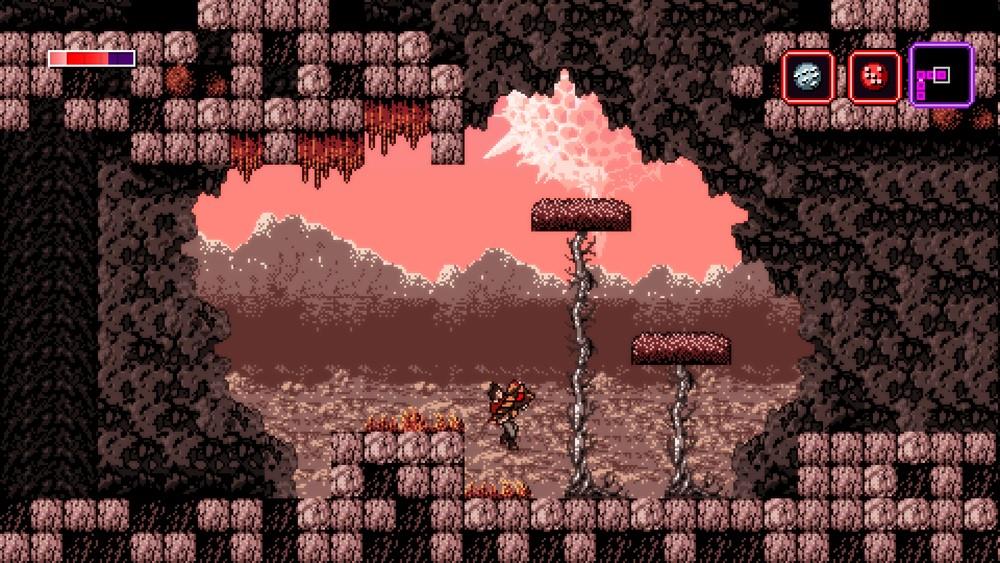 There is sort of a puzzle solving feel to most of this, as you will run into seemingly dead ends constantly, wishing you could jump just a little bit further or find some means of triggering a switch that is jus tout of your grasp. At these points you are forced to turn back and retrace your steps, seeking out another path. Eventually you’ll find something, be it a powerup or an upgrade to your weapon that grants you the ability you were wishing for earlier and send you trekking back to what was previously a stopping point. There are many times where I found myself seemingly stuck for a n extended period of time when you’ll find the on room you hadn’t revisited and find it opens up to an entirely new section of the world.

The influence of the NES classics is both heavily referenced by Happ in his explanation of the game and in the visuals when you see the world. There is a distinct, 8-bit feel to the graphics, at least when they are standing still. Once things get moving however, you will notice a variety of visual flair added that definitely couldn’t have been achieved on the classic systems of the 1980‘s. One of the weapon upgrades that you will obtain will allow you to manipulate the pixels of the world.

You see, the 8-bit style is about more than just visuals; it becomes a key component to the gameplay experience. There are a lot of areas of this world that are damaged or appear to be suffering from some sort of visual glitch. It looks just like the old NES did when things would freeze or crash. You will eventually be able to manipulate these pixelated defects and interact with these apparent glitches for your own benefit. Perhaps it removes a wall that once blocked your way, or it turns a certain class of enemy in platforms that you can use to cross dangerous areas. You will find yourself doing a lot of experimentation with this particular power and that really adds a lot to the Axiom Verge experience. 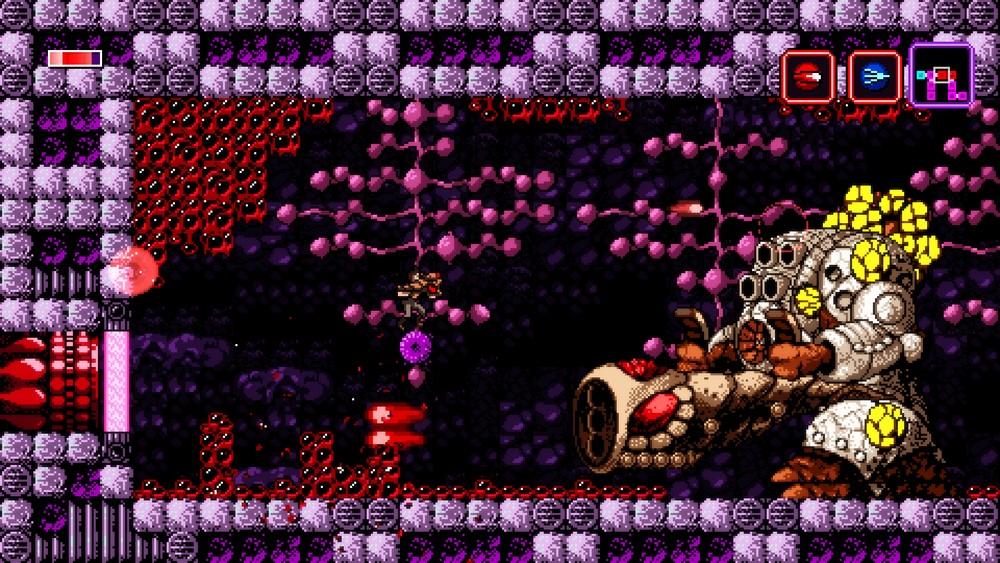 There is more than just the adventure at hand in this experience too. Don’t worry, that will keep you occupied for quite a few hours (12-15 at least I would say). However fans craving a different sort of experience will also find a speed run option available from the main menu. The speed run mode full embraces the niche practice that many old school gamers have taken to in challenging you to beat the game as quickly as possible. You won’t need any outside tools to manage your runs, as this mode adds an on-screen timer to the game to keep track of your time played and removes any dialogue that you would come across in the story in order to speed things up. It proves to be a fun challenge after completing the game, and one that I look forward to seeing in the hands of the general public. I have never been one to attempt speed runs myself, but think that I might be revisiting this one to put these tools to the full test and see how I stack up against the world.

If I were to lodge any complaints with Axiom Verge, it would lie solely on the lack of direction that the player is given in the adventure. Yeah, I know, this is a game about exploration, a point that even I made earlier in this review. However, it can get really frustrating at times when you have absolutely no idea how to proceed. Despite my frustrations, I always found myself coming back to the game though and giving it one more try. This is due a lot to my age I know, as this sort of thing turned me off to this genre a lot as a child (what can I say, I had zero patience).

Axiom Verge is an awesome throwback to some of my favorite games from my childhood. Thomas Happ certainly has a love and understanding for the Metroidvania style of games as this is a loveletter to fans of the genre. It can be a bit frustrating at times but patience and persistence will reward you with an awesome experience from beginning to end. The game is deceptively deep and an experience that sucks you in almost from the start. Fans of of the genre, both young and old will definitely want to pick this one up when it launches this week on the PS4, or later this year on the Vita and PC.

Old school merely in looks, Axiom Verge is the definition of a great action and explorations game. The Metroidvania genre has rarely been done this well and this adventure deserves to be held up there among the greats like Symphony of the Night and the original Metroid.