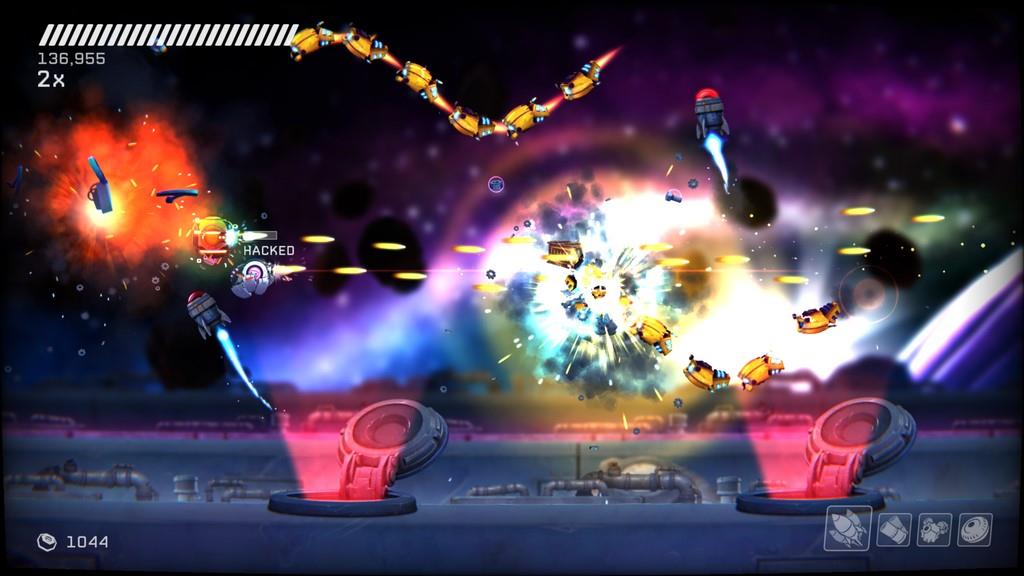 A while back I previewed RIVE, a game that mixes space shooters with platforming and multi-directional aiming and for the most part it was pretty good with some nuances here and there. However, the preview only let me play so many levels and I felt like I got a pretty good feel for it from what I’ve played. Now the full game has been released and it’s time to see how it holds up now that it’s out in the public. As with the preview I’ll be taking a look at the Steam version though the game was also released on the PS4 with Wii U and Xbox One versions on the way as well.

As stated in the preview, the game starts out with you flying around in your ship while going through some asteroids. Pretty standard space shooter stuff so far, though that ends rather quickly as you end up coming across a starship. Once you enter the starship the game turns on the gravity and now you enter a platforming segment as you navigate your way through the ship. Throughout the game you’ll have occasions where the game switches back and forth between shooter segments and platforming segments with some areas forcing you to alternate between the two during combat.  It takes some getting used to but it's not that bad once you do.

Once you complete your first mission you’ll come across a warp portal that takes you to what is essentially the hub for the game where you can purchase upgrades using what appears to be small bolts that you find by defeating enemies and blasting open boxes and crates. These upgrades range from new weapons you can use to increasing your health and even increasing the range that you can draw bolts to your ship so it’s easier to collect them. You’ll be coming back here after each mission so the first time you visit you can get an idea of what you want to buy and what to save up for. Needless to say I went for any health upgrades as soon as I could and you’ll soon see why.

If you’re an expert at twin-stick shooters then it shouldn’t take too long to get the controls mastered. I never tried using a keyboard and mouse to play the game, but I’d guess you could use the mouse to aim and fire if you’re more comfortable with that. Your ship can fire in all directions which is quite useful as enemies will be coming at you from all directions. After years of playing twin-stick shooters ranging from Robotron 2084 to Geometry Wars, this came natural to me. However, the game isn’t just your standard platforming fare with some fancy shooting thrown in. You also have the ability to hack certain switches and devices, but as you progress you’ll also gain the ability to hack things such as repair drones and turrets. The repair drones are nice in that they’ll repair your ship when you take damage, but only for so long before they’re useless. With the turrets, they also have a limited amount of firepower to them, except they also fire whenever you do whether you like it or not, so you might find yourself wasting ammo in your turret instead of saving it for when you really need it. 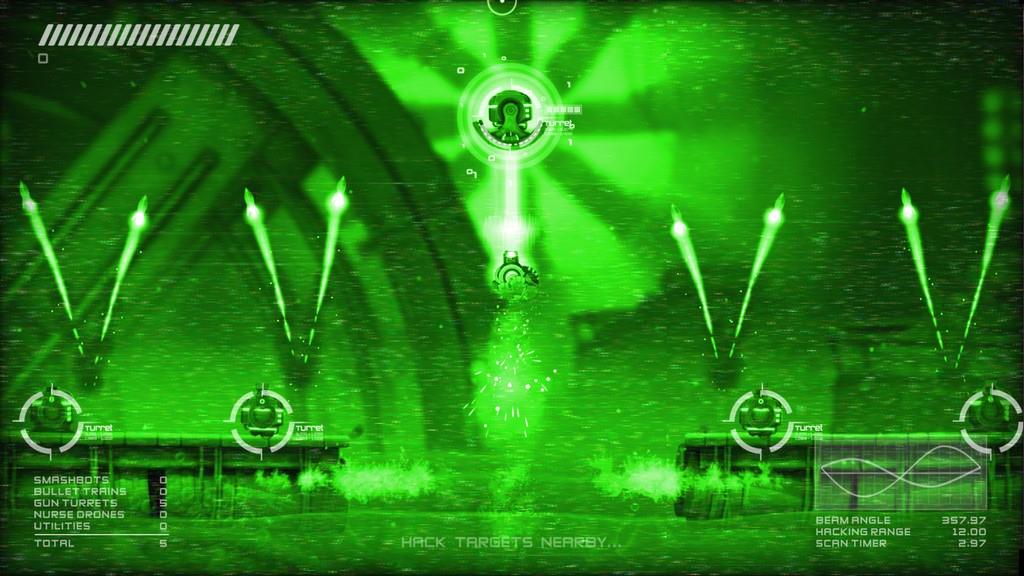 Even if you’re a fan of twin-stick shooters, the difficulty of the game can take its toll on your patience. I talked about it a bit in my preview but the difficulty in the game can be quite frustrating even early on. If you like a good challenge, then you should be fine, others who have difficulty with these types of games might be turned off with just how difficult the game can get. For starters, when you start up the game there are three game options, but only one is available at the start: Hard Mode. As far as I can tell, you can’t change this at all. I tried using the D-Pad to change options and I went to the actual options menu, but there was no way to change this from Hard Mode. The game tells you right off how hard this will be (for the record, the two unlockable options are Speed Run Mode and Single Credit Mode).

Early on the difficulty isn’t too bad as you go through the asteroid field and the first mission. After that the game’s difficulty jumps a lot. Throughout a mission there will be several areas where you can’t progress or backtrack until you’ve taken out every enemy wave. The game makes sure of this as sometimes there are electrical barriers blocking your path. This normally wouldn’t be so bad except that a lot of the enemies fly at you so fast it’s difficult to react. Even then when you do have time to react, you might not have a lot of room to react in. One enemy you’ll learn to hate early on are these blue orbs that’ll home in on you rather quickly and explode on contact, and they don’t travel alone. These enemies like to seemingly pop out of nowhere giving you very little time to react. If you’re not quick on the right stick or your aim is just a tad bit off, you’re likely going to take several explosions to the face. 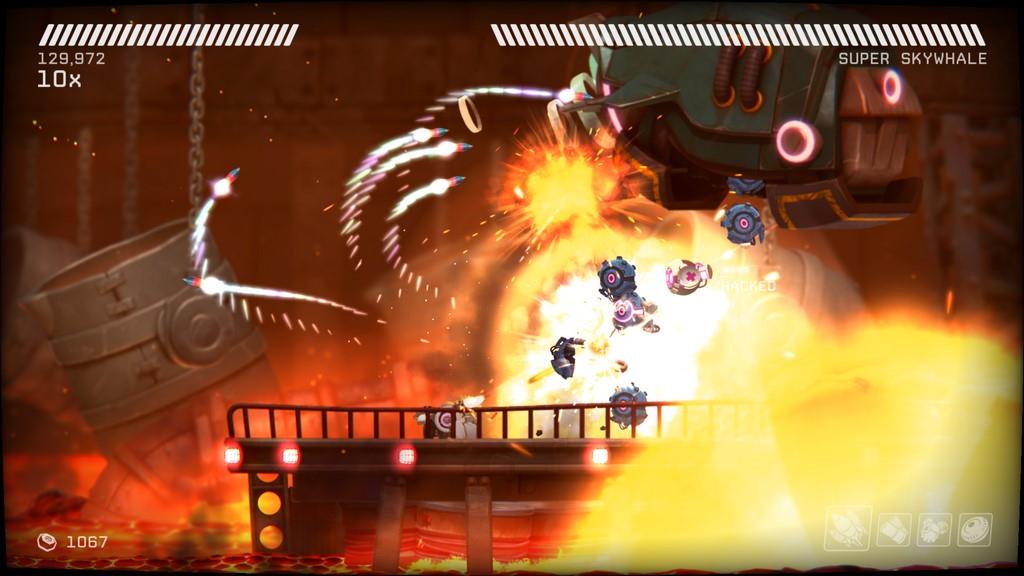 That’s not to say that RIVE is impossibly difficult. Like most games the skills will come in time, but until then you’ll be seeing the game over screen quite a bit. Unfortunately it doesn’t seem like the game gives you full health when restarting from a checkpoint as when I went back to the game at one point several missions in, I only had half health. Considering that as soon as I moved I had enemies bombarding me from above at a rapid pace, I ended up taking a few blasts within seconds. Enemies can drop health power-ups when defeated that do restore a good amount of your health, so it’s not like you have to go through an entire stage on one life bar. It’s just making sure you nab it before something else destroys you first.

To be honest, my opinions on RIVE really haven’t changed since my preview article. I still find it to be a pretty good game, albeit a frustrating one at times. If you’re not familiar with or not good at twin-stick shooters, you might find yourself having some issues with RIVE. You’ll probably want to take the first mission rather slow to help improve your precision with the right control stick. If you like a challenge that’s about as far as you can get from the game holding your hand without going into Dark Souls territory, you should do just fine.

RIVE is a fun, albeit really challenging blend of space shooter and platformer. The intense challenge early on might turn off less experienced players, but those who want a great challenge should enjoy it. Just get used to having blue-colored drones explode in your face quite a bit.