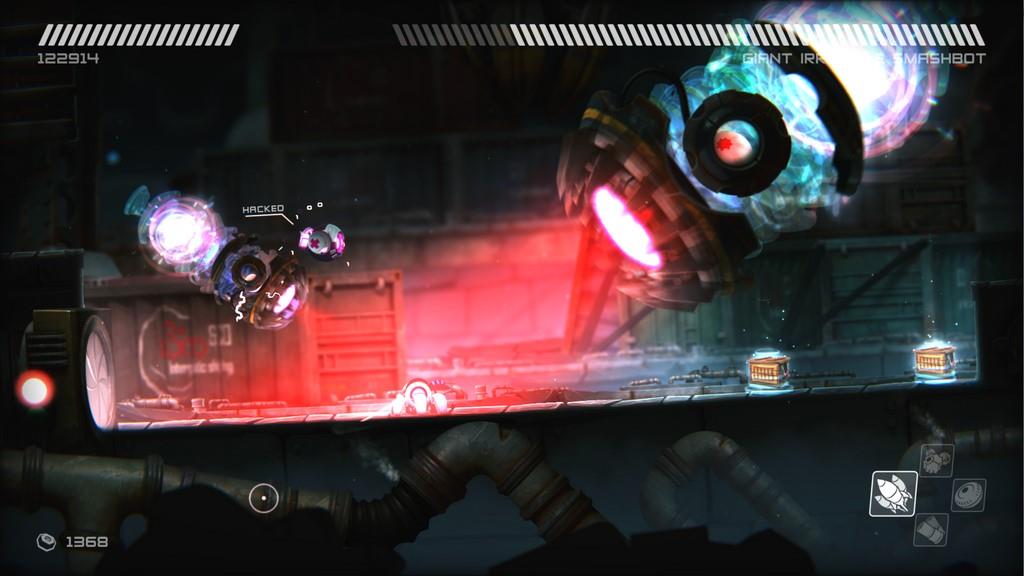 I’ve been a fan of platformers for as long as I can remember.  I also enjoy a good shoot-em-up now and then.  Though I’m not nearly as good at shooters as I am with platformers, I do enjoy games such as Gradius, R-Type, and Raiden from time to time.  This is good because Two Tribes is working on a game called RIVE which combines both of these genres into one game.  Granted I’m sure it’s been done before (then again, what logically hasn’t been done yet in gaming), but I received the opportunity to check out RIVE and get Two Tribes’s take on this combination of genres.

The game begins as you fly around in your ship shooting down asteroids until you come across a starship.  Going inside switches to a platforming segment as you navigate the ship.  After completing the first mission you’ll come across a warp portal that will take you to what’s basically a bit of a hub for the game.  You’ll find an upgrade station where upgrade your ship with new abilities or weapons.  After that you’ll find another warp portal that will take you to your second mission.  After you clear that mission and end up back in the hub, the warp portal will now take you to the third mission and so on.  The missions will occasionally swap back and forth between a free-range shooter and a platformer, depending on the situation.

Your ship has the ability to fire in all directions.  If you’re familiar with any twin-stick shooter game, this will feel pretty natural and it’s something I picked up rather easily.  As you travel through each stage you’ll have to shoot down enemies and avoid obstacles.  You know, the standard platforming fare, but this kind of takes things up a notch, even in the early missions, but I’ll touch on that in a moment.  Your ship also has a hacking function that will let you not only hit certain switches and activate some devices, but you’ll also learn how to hack certain things to your benefit.  For instance, there’s a certain kind of drone that you can hack that will fly behind you and refill your health a bit when you take damage.  The drone has very limited use but give something I’m going to bring up about in a moment, it can prove to be invaluable.  This is just one type of robot that you can hack so the fun doesn’t stop there.

At times you’ll come across a room where you can’t progress until you’ve defeated every enemy the room throws at you.  That’s fine, but more often than not you’ll have something else trying to kill you at the same time.  One scenario in the second mission has you taking down some enemies that remain stationary, but are on the other side of a piston that’s constantly trying to kill you.  Sure you could move to the other side of the piston, but that will leave you very little room to deal with the enemy.  That actually boils down to what’s probably my only real issue with the game: the difficulty can ramp up rather quickly. 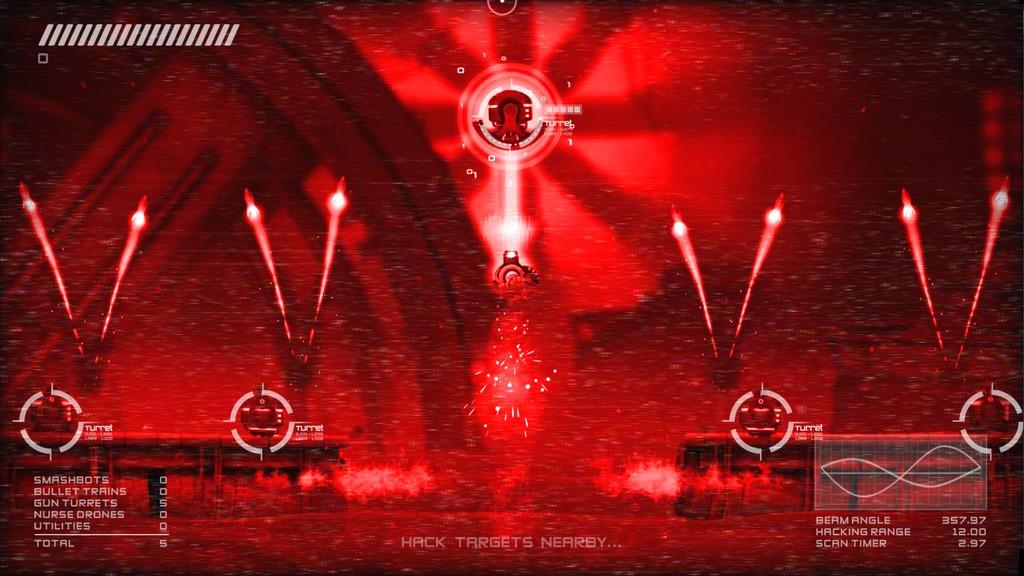 The preview version of the game I checked out only has seven stages out of around thirteen available to play.  That’s fine, I mean this is a preview build after all.  However, provided that the mission order in the preview will be the mission order in the final game, the difficulty can jump quite a bit early on.  I mentioned the situation with the pistons in the second mission.  Another common situation you’ll find early on is a particular drone enemy that will fly very quickly towards you and will explode on impact, giving you very little time to react to it.  That’s fine…if you only had to deal with a couple at a time.  A few times you’ll have to take down multiple drones at once, sometimes from different directions, and without precise aiming you’ll be taking a lot of damage very quickly.  Remember that health drone you hacked?  This is where it comes in handy.

The last thing to bring up with this preview is the upgrade station.  Throughout each stage you’ll find what I’m guessing looks like nuts or bolts that can be used as currency to upgrade your ship between missions.  The game gives you a bit of a guide at first on what to upgrade, but after that it’s up to you and the upgrades are okay for the most part.  The upgrades include new attacks you can use with the face buttons, armor upgrades, and a magnet upgrade that will pull in nearby nuts from a longer distance.  After getting a new attack for the first upgrade, I started going straight for the armor upgrades to counteract all of the drones that were exploding in my face.

RIVE is a pretty enjoyable game so far and a nice blend of the platforming and shooter genres.  The difficulty can increase rather quickly but not to impossible levels.  RIVE is set to release on September 13th and will also launch on the PlayStation 4, Xbox One, and Wii U, but no price point was given.  As for the Steam version, I’m guessing you can use a keyboard but it’s highly recommended to use a dual analog game pad such as an Xbox 360 controller for precise aiming, and trust me when I say you’ll need it.  If you’re a fan of platformers, twin-stick shooters, or a good challenge, you’ll want to keep RIVE on your radar in the coming weeks.