Written by Russell Archey on 9/1/2016 for WiiU
More On: Axiom Verge

In March 2015, Thomas Happ Games released Axiom Verge for the PlayStation 4 with Windows, OS X, and Linux versions coming a couple of months later.  Earlier this year the game came out of the PlayStation Vita and now we have a version for the Wii U.  The game received mostly positive reviews and was reviewed here by Jeremy Duff who gave the PS4 version an 8.5.  I played through the Windows version when it launched on Steam and really enjoyed it.  Now I have a chance to play through it once again as I check out Axiom Verge on the Wii U.

The story begins as a scientist named Trace is working on an experiment in his lab when something goes terribly wrong.  As a result the building collapses down on him, rendering him unconscious.  After waking up, Trace finds himself on some sort of strange world unlike anything he’s ever seen.  He then hears a voice that tells him to grab a gun in a nearby room.  After grabbing the gun, Trace sets out in this new world to find out just what’s going on, why he’s there, and why everything seems so hostile towards him.

The story opens up more as you explore the strange new world you find yourself in, but if a lot of this seems very familiar, that’s probably because Axiom Verge has a very Metroid-like feel to it in how it looks and how it plays.  Axiom Verge contains a lot of exploration that needs to be done and in very similar fashion to Samus’s outings, you’ll likely run into dead ends where you can’t progress any further until you find a new weapon or ability.  Some of these abilities include adding some extra height to your jumps or the ability to phase through certain thin walls or pillars.  If you yourself at a place where it looks like you can go further but can’t, make a note of it so you can come back later.

Thankfully you’ll find more than just that first gun as you progress.  As stated you’ll come across not only different abilities but weapons as well including a drill that can be used to break certain blocks to open up new paths, as well as about twenty or so different weapons.  Some of the weapons are pretty useful such as one that shoots out a short-range but somewhat powerful ball of electricity and the flamethrower, my personal favorite weapon in the game.  Others might be used once or twice in special circumstances, but beyond that I found myself never using them again.  It’s kind of hit and miss with them depending on your playstyle. 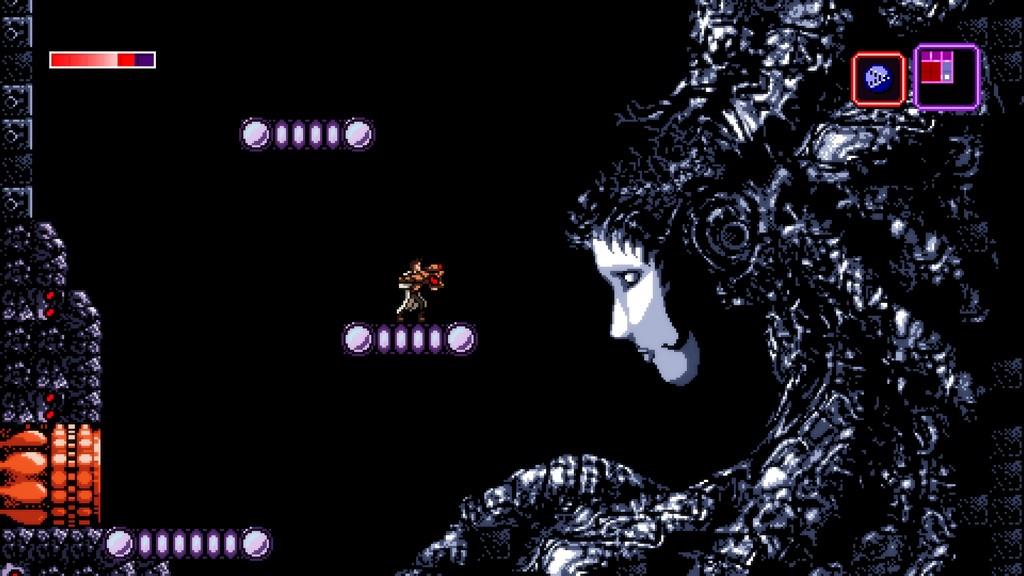 One of the best features about Axiom Verge is its map system.  If you remember back in Metroid, the series didn’t start using an in-game map system until Super Metroid on the Super NES.  If you wanted to keep track of where you were at in the first two games, you had to either memorize what specific areas looked like or grab a pencil and some graph paper.  Axiom Verge allows you to view the map from the pause menu, but the Wii U version also allows you to view the map on the game pad, a very nice feature as I kept having to look at the map when playing the PC version whenever I forgot where I needed to go or kept getting turned around, so every few minutes I was pausing the game to look at it.

In fact, the map system isn’t the only use the game pad has.  I’ll definitely give Thomas Happ Games credit for utilizing the game pad in a few different ways.  One of the map system’s functions is the ability to mark a certain spot on the map to remind you to come back later.  You can leave two different marks and they’ll mark whatever room you’re currently in.  With the Wii U version all you have to do is touch either the 1 or 2 on the map portion of the game pad to leave that mark where you’re standing.  Touching it again while in the same room will remove the mark.  You can also use the game pad to select your weapon by touching it on the pad.  You can also still use the right control stick to select your weapon which will pause the game while you do so, as opposed to using the touch screen which won’t. 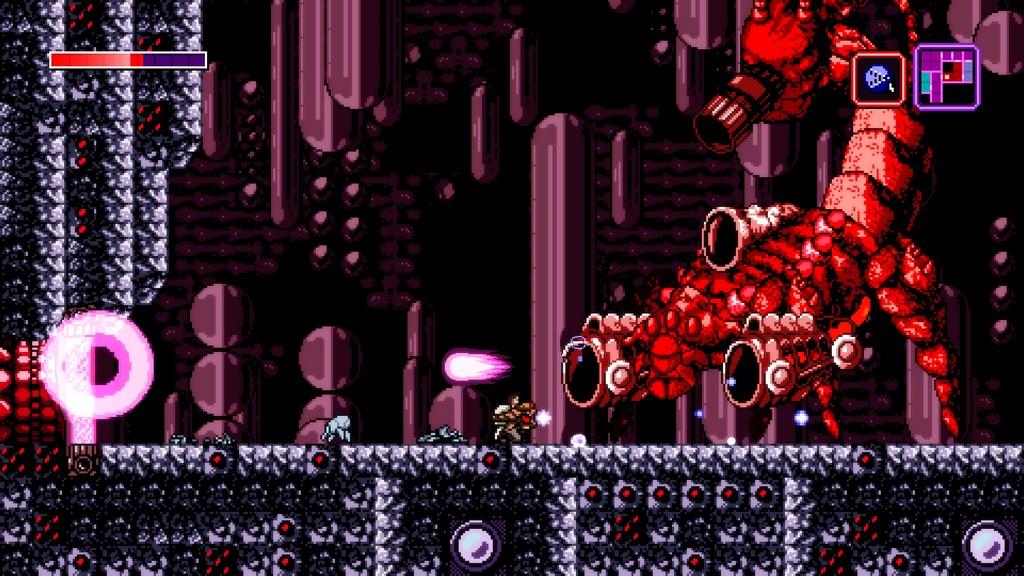 When it comes to the look and feel of the game, Axiom Verge feels like it belongs on the NES from the graphics and audio down to the gameplay.  That being said, the graphics and audio could be a bit better.  I like how a few areas of the game look like they came straight from an NES or Super NES game, but some of the palette choices could have been a bit better with some areas having some dull and drab colors.  Granted that does kind of reflect on the particular areas, but it can get tiring to look at now and then.  Same goes for the audio though I do enjoy most of the music; there’s just one or two tracks that get old fast, including a couple that is just ambient sound.

Once you’ve played through the game enough that you need a new challenge, you have a couple of different options.  When starting the game you can choose from Normal or Hard difficulty, but there’s also a speedrun option.  The speedrun option adds a timer to the upper-left corner of the screen and removes dialogue to make it more speedrunner friendly.  I’ve never been able to get good enough at the game to attempt this option myself outside of just checking it out for a little while, but if you’re a speedrunner interested in running Axiom Verge, this is the option to go with. 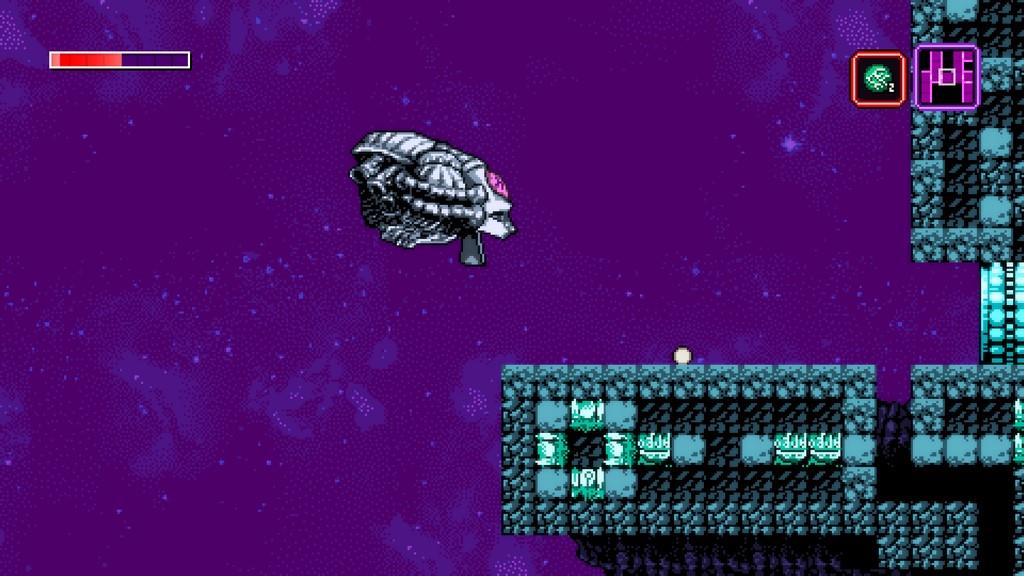 I didn’t have many complaints the first time I played through the PC version and I still don’t have many with the Wii U version.  The biggest complaint gamers might have with the game is the constant traveling back and forth while gathering new items and trying to remember where to use them.  The map system does help alleviate that a bit, and there is kind of a central area that has paths leading to four other areas making travel a bit easier, but you won’t come upon that until later in the game.  Not to mention it’s not the actual center of the game so there are still outlying areas to visit, then afterwards you’ll have to travel a great distance to utilize a new ability.  At least with Metroid you only had five areas total and didn’t have to go far to get from one area to the next.

That said though, Axiom Verge is an excellent game.  It harkens back to the days of classic exploration games where you won’t have anything obvious telling you where to go.   The enemies are rather unique and might require different ways of defeating them other than just a normal run-and-gun method.  The bosses you’ll encounter are one of my favorite things about the game as while they can feel difficult the first time you face them, it feels like a fair challenge.  I had a couple of bosses later in the game that took me about a dozen or so attempts to defeat, but each one felt skill-based as opposed to “well that was a cheap attack” or “I had no way of defending myself so I’ll just have to tank some damage”.

If you’re into retro-styled games, Axiom Verge is a must have, especially for fans of Metroid-like games.  My recommendation would be to not go into this nitpicking it apart because the Metroid series did something better or because it doesn’t have this or that.  There is a lot of back-and-forth exploration that could have been handled a lot better and not all of the weapons are useful.  For me, I only used a few on a regular basis and the rest I only used when I first got them to check them out.  However, if you can put all of that aside you’ll find a great game with plenty of exploration to perform, items to find, and an interesting, if not strange story to tell.

Axiom Verge is a great game with plenty of exploration, and the additions to the Wii U version were nicely handled.  Fans of the Metroid series will likely want to check it out.  Be cautious however, as there’s a lot of back tracking to previous areas that felt like it could have been handled better.  If you can get past that, you have a great Metroid-style game that feels like it belongs on an 8-bit or 16-bit system.