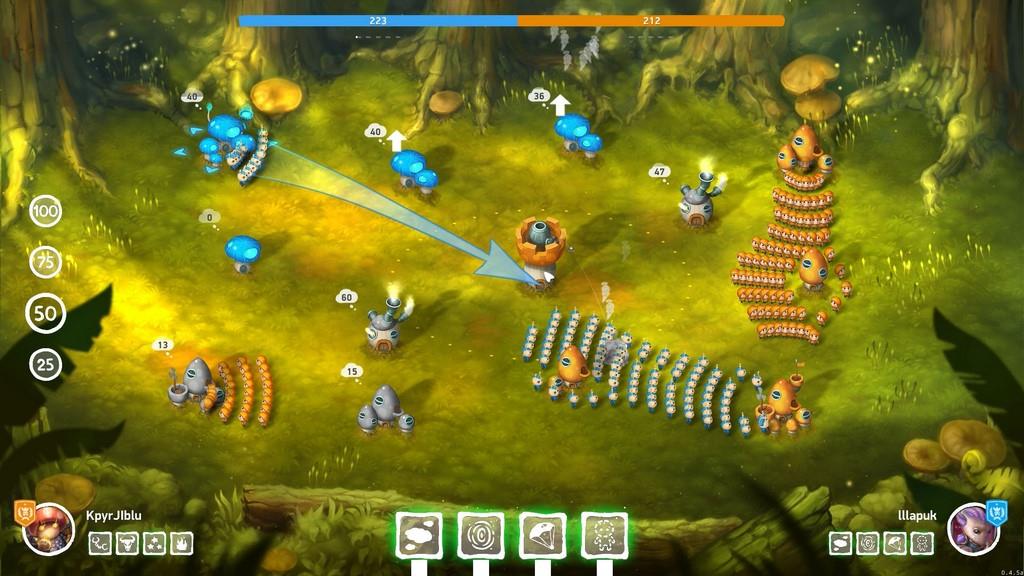 Last weekend, Mushroom Wars 2 opened up its closed beta for a limited time event. The Beta gave a glimpse of the entire production, but only really offered the multiplayer up for play. The new menus and UI layout were in effect, its just that most of the selection paths lead to dead ends. However, there were obvious improvements in the UI highlighting dedicated tutorials, a detailed controls screen that more easily laid out all of the control options for easy reference, and a new campaign interface that suggested a richer experience. The previous edition's campaign both served to deliver the backstory and used the opening levels to act as a sort of on the fly tutorial, slowly introducing new elements after earlier ones had been practiced. This time around, the campaign screen lists 4 distinct worlds that hint at all kinds of possible diversity underneath, but sadly the menu screen was as far as one could get. Overall, the new menu system and navigation was a nice little bonus that really seems to make the most of a modern PC interface, incorporating not just the game but links to related social media and internet sites. I'm not sure how well this particular incarnation of the menu system would translate to other consoles or mobile gaming, but on PC it worked well.

As for that one game mode that was on display, multiplayer, Mushroom Wars 2 has really taken a positive step forward. Mostly the game played as before: there are three building types where armies of little mushroom men spawn from the first, Villages. Then you have Towers that shoot projectiles at any hostile units in their path. Lastly are Foundries, which give an attack and defense boost to all troops for every Foundry owned across the map. So you commit troops from building to building to first overtake neutral facilities and then those of your opponent to win the match by total domination. At least that was what was on display in the Beta. There were hints in the loading screen that come alternate objectives could be deployed via the game type column in the breakdown. Types that have been a part of the campaign previously, like control a number of key building first, or control a certain critical point for a given length of time. I would expect things like this and maybe more in the full release, but domination was the game of the Beta, as it was in the original Mushroom Wars.

But as for that shining step forward, the big gains from the original lied in two areas: the first being the obfuscation of troop strength. In the original multiplayer, as in the campaign, troop numbers and defense strength was always public knowledge. If you wanted to challenge a building, either neutral or controlled by an opponent, the unit strength contained therein was always on view. However, in Mushroom Wars 2, only neutral defenses are revealed. Opponents strengths are not visible. So not only are you frantically trying to maneuver armies to the front lines while reinforcing your own defensive positions, but you also have to keep an eye on your enemy to have at least a basic understanding of how he is setting up his defense and where his vulnerabilities may lie. This must be done purely form keeping a mental count of how many troops you may have noticed tramping across the map to various endpoints. It's not enough to just manage your own business and make a quick calculation before striking based on readily available information at your fingertips. This version is really rewarding the player who can track the big picture by careful observation while some of the critical data can only be guessed at. 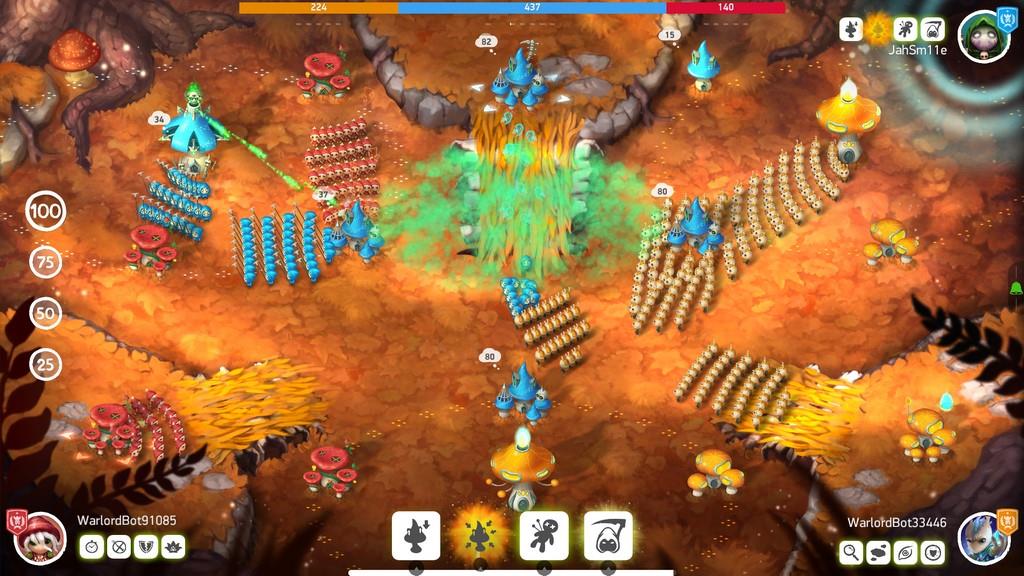 The second improvement is the introduction of Heroes. In Mushroom Wars 2, in addition to your classic troops that can be upgraded slight with Foundry captures, your little mushkin army is led by a unique hero character that has 4 distinct special abilities that charge throughout the match. These abilities range from firebombs and tornadoes that can wipe advancing troops right off the map as they march, freeze spells that will lock down a building and trap the defensive units inside, reinforcement spells that can teleport troops from one location to another or even dump and entire battalion in an area, and general boost spells that speed up or give temporary attack bonuses to troops. These abilities can really turn the tide of a battle. A well placed firebomb can stop an enemy in their tracks. A quick reinforcement can instantaneously turn a defense already stretched too thin to hold recently won objectives in an imposing force capable of continuing the march deeper into enemy territory. The abilities can be used multiple times in a match but recharge slowly. 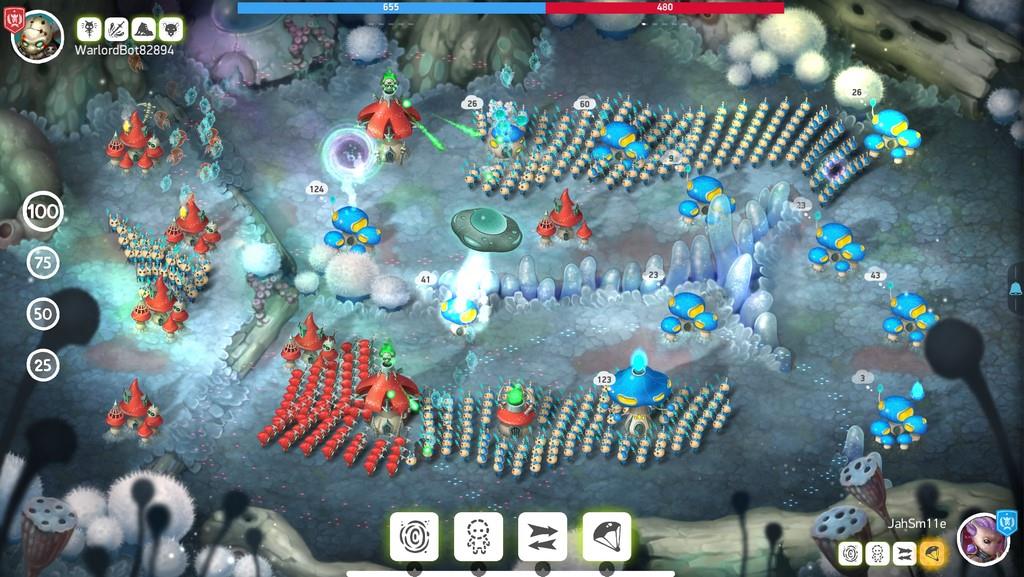 The only gripe I have with the game in its present state is that the battles very quickly played out to an obvious winner. At the start of every match, there is a quick land grab as human opponents snatch up neutral territories across balanced maps. Then comes the very first encounter between the warring factions themselves, and whoever won that initial salvo, sometimes by being just that little bit more aggressive or by using a spell at just the right time and place, was usually well on their way to victory. The hero abilities and opening strategies were usually good at giving the slightest edge in winning that first clash, but after that the games were mostly downhill. Whoever established their position in that first exchange could ride that upper hand to victory. The battles boiled down to something that felt a long way from a cerebral chess match and still less than a quick tug of war. It was more like two cars crashing and whichever came off slightly better off from the initial impact could just roll downhill to the finish. I would hope the introduction of some variation in the game modes or endgame scenarios could alleviate a measure of this, but on balanced maps if one player gains a stronger position it is difficult to overcome, even with Hero abilities to exploit.

All in all, Mushroom Wars 2 took a nice multiplayer step forward from the original. It hints at even grater changes still across the campaign mode and after being so pleasantly surprised by the first game I can look forward to whatever this sequel will become.