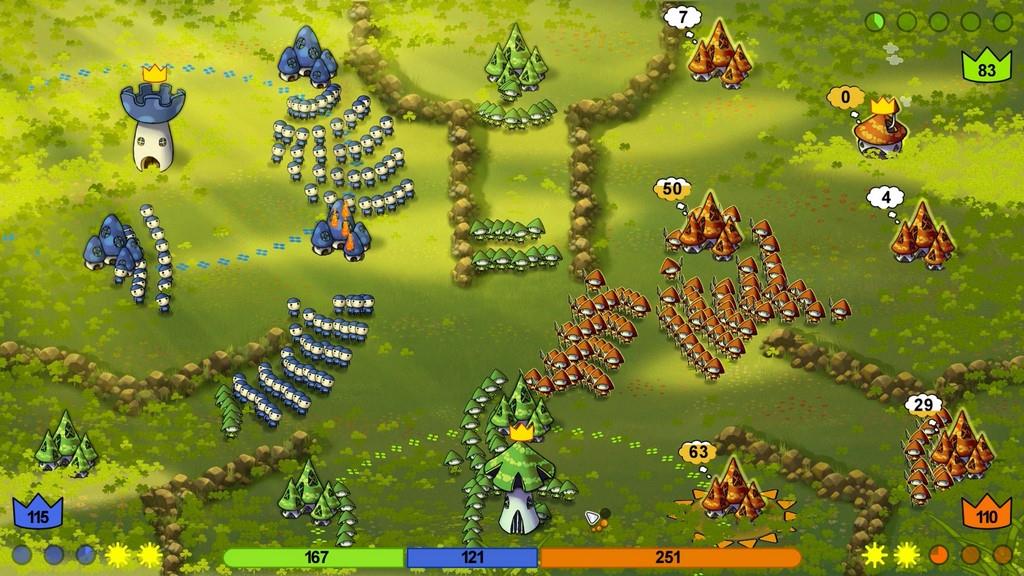 I didn't immediately buy into Mushroom Wars on first because I really wasn't sure what to make of the look of the whole thing. It didn't look overly cutesy but at the same time it didn't instill any assurance that the game was going to be anything but a gimmick. However trusting in the platitudes the original PSN game received, I gave it a go with an open mind. And I'm very glad I did. Screenshots and even videos don't really do this game justice, you have to grab the mouse and take control to really get what this game is: a very enjoyable real time strategy game that doesn't hide behind it's style to cover a lack of substance, but uses that style to streamline fast paced gameplay that is uninhibited by useless complexities. It doesn't try to be something it's not and doesn't try to advertise as such either. It's a simple looking game that is simple to play but really does deliver on that gameplay.

Once the game starts moving you'll find the music is good and the visuals are clean. There isn't a ton going on but the tunes hum along and the graphics don't get in the way of the straightforward action. The game does offer controller support but its real strength is in the mouse. Not so much mouse and keyboard mind you, because everything you need to do can be done effortlessly with clicks, click and drags, and the scroll wheel. The UI is clean, the interface is simple, there is nothing to get in your way.

And that's key because when the action does pick up time is everything. The game rarely ever stops and lets you catch your breath once a stage has kicked off. It's full bore until a victor is declared. Some of the stages feel like time trials, and not just as a matter of click speed but much more on quick thinking and devising a winning strategy on the fly. Dally too long and your enemy will have too much territory to overcome, or worse will have already knocked down your doors and crippled your forces.

The gameplay is straightforward. You have your armies of mushroom troops that grow from the primary type of building, Villages. In addition to Villages you have Towers that shoot back at any opposing soldier within range and Foundries that give all attacking and defending troops a bonus for every Foundry owned. Every building is up for grabs between the competing armies an the first two of those three types can be upgraded, providing quicker troop output or faster tower defense respectively. Upgrades cost troops though. So taking a Tower form level 1 to 2 will take 20 troops housed in that Tower right off the map. There are three game modes: a campaign that walks your through the game, the mechanics, and progressively harder enemies and challenges; skirmish, one of battles against 1-3 opponents; and multiplayer. Win conditions can vary somewhat, especially in campaign, but mostly boil down to defeat all enemy armies. Occasionally victory is earned by capturing a particular set of buildings or even just holding it for a given amount of time. There are some terrain elements on fairly standard rectangular maps, various obstacles and pits that will funnel your attacking forces, or those of the enemy, through certain choke points that can be exploited. The actual conflicts within a battle take place entirely between the marching troops and their target. There is no place where opposing armies actually duke it out on the battlefield, but rather march right past each other with the sole goal of trying to unseat whichever enemy lies in wait at their destination. 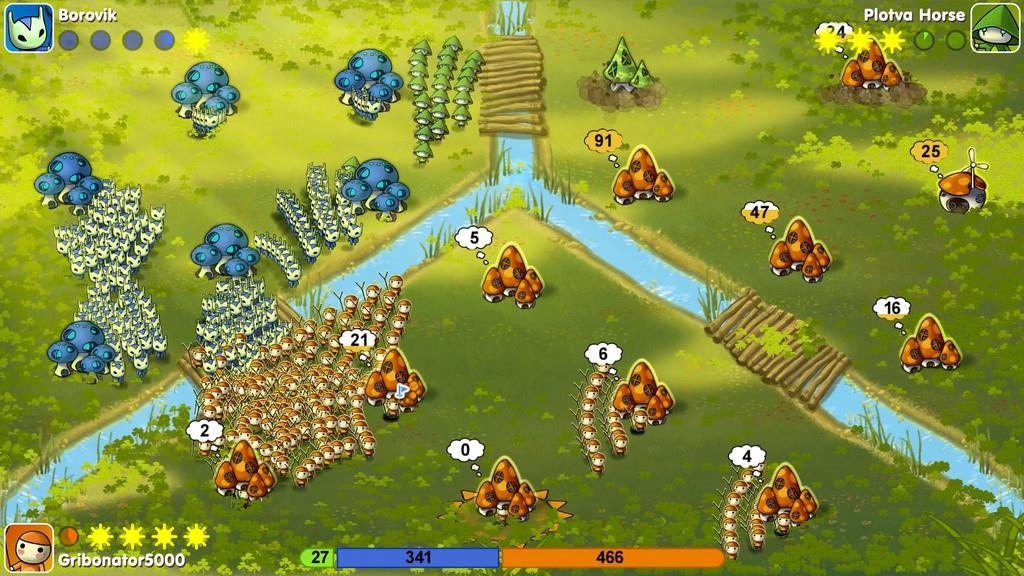 In the end, it boils down to a numbers game. Entrenched units in a building get a defending bonus (around a 25% boost), so an attacking force of 16 will not take down a defending force of the same number, you'll need more like 20 to do so. But get a few foundries and that otherwise underpowered attacking force just might have the edge to overcome even numbers Typically the winning strategy is to keep reinforcing your front lines and then just send well more than you need to take the next building and push a step forward, not only to capture the target but also to provide the strength there to defend it from an immediate counterattack or provide and instant level up to the structure.

Campaign is probably the best place to start. It will walk you through what complexities there are at a steady and measured pace. Skirmishes can be breezed through pretty quickly. And at the end of only a few hours, you'll likely have conquered everything there on offer, although probably not on the toughest difficulty setting. And that's when you'll first realize the limitations of the game. Unless multiplayer really takes hold of you, there isn't much more than different difficulties across 30 campaign maps and another dozen or so on skirmish. Within that you've only got three building types, no difference in troop types, and commands basically amount to: march some or all troops from point A to B, upgrade or change building type, wait for a stronger force or send them now. It's not terribly complex, but it is very fast paced, and actually strikes a fine balance there. You won't be overwhelmed with choice, which works well because on many of the levels and especially at the higher difficulty, you absolutely must make those choices quickly. I feel that at the pace this game is played, increasing the complexity needlessly would only cloud the issue and probably detract from the clean gameplay rather than add to it. 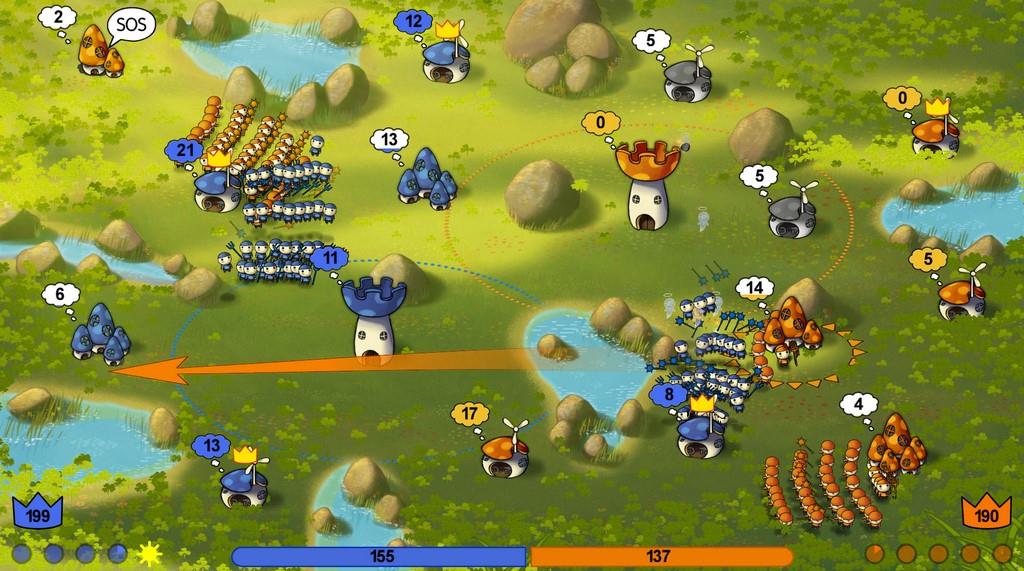 As of this writing, Mushroom Wars can be found on Steam for 20% off its normal price of $10, a price that feels about right for this game. I think you're getting good value for your money and there are no hidden transactions after the initial purchase, unlike the iOS counterpart for example. It's true you can pick up a ported version of this game for free on mobile, but there are in-app purchases needed to unlock the full experience there and that will end up setting you back about the same as the full Steam price. But even then, the touch interface just isn't as nailed on as what's on offer with the mouse and there are other inferiorities in the mobile versions as well. You can't commit only partial troops from a given building like you can with the scroll wheel on PC and you're not able to click drag to select groups of forces across buildings at one time. That's not to mention that the iOS version I downloaded to test was entirely in Russian and I couldn't figure out how to change the language or even if I could...

In the end, you probably won't be sinking hundreds of hours into Mushroom wars but it's easy to pick up and once you do you will spend a half dozen easily before you'll think about wanting to put it down. It has that great quality that's a hallmark of the best games of this type: it's just so inviting to always want to play one more level. Simple pleasures, not giant epic payoffs, and a tight control scheme and visual direction simple enough that it should appeal to a wide audience of gamers, young and old, while offering a pace fast enough to keep the challenge going despite that simplicity.

Overall this game is super easy to pick up and fun to play. It doesn't have great depth but uses a swift pace to iron out any disappointment that might have introduced. It's a good little time-waster, and comes in at an attractive price point for what's on offer.