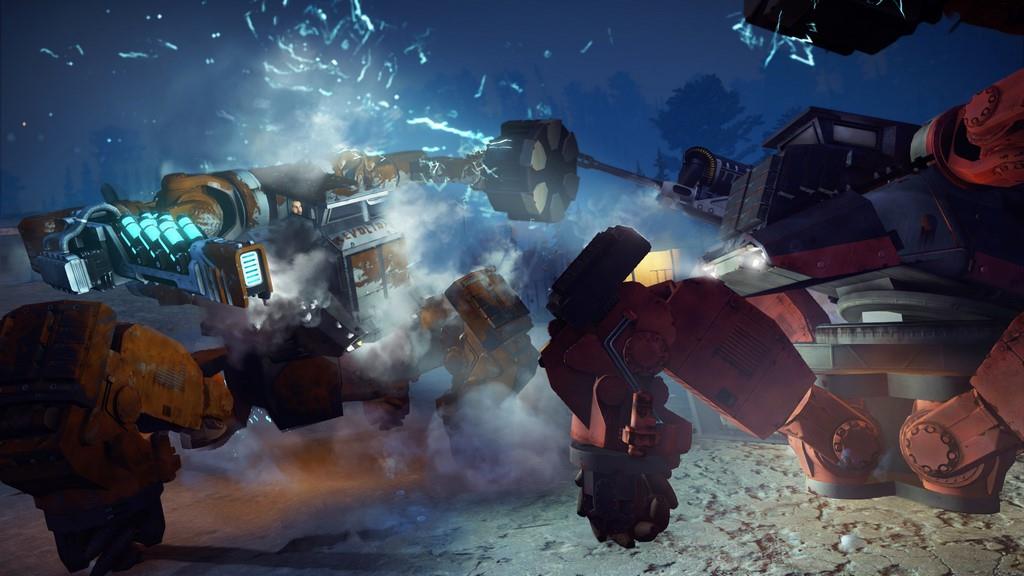 The pine-scented countryside is pockmarked with deserted science stations. Ivy grows over warehouses and brutalist concrete buildings. Military structures—satellite dishes, radio towers, and fuel tanks—nestle in the hills. Every vehicle is military owned and operated. Every person on the island is an enemy combatant or prisoner of war. This is the Mech Land Assault DLC, the second piece of the Air, Land & Sea season pass for Just Cause 3.

This entirely new island lies to the north. It’s called Insula Lacrima. There are four provinces to liberate on Lacrima, and you’ve got rocky, forested terrain to negotiate. Hitting trees is a problem when you’re flying in your wingsuit, but hitting trees is not a problem inside of a mech.

There are a few things you should know about these mechs. 1) They’re ugly in a beautiful kind of way. 2) You can’t hijack them without a disabling shot from some new zappy gun—and those zappy guns are hard to find and only come with two shots. And 3) these mechs are so destructive that they draw a lot of heat from the authorities. There’s zero opportunity to take a mech down the road for a Sunday drive.

While Just Cause 3 is still a playground of destruction, the illusion wears thin in a few spots in Mech Land Assault. You’re introduced to these thin-skinned but wonderfully destructive mechs. But when you’re in a mech, the minor inconsistencies governing Just Cause 3’s destructive nature are easy to pick apart. Concrete barriers go boom, but not concrete buildings. Fuel tanks go boom, but not if they have an eDEN Corporation logo on them. You can wipe away a lot of scenery, but there’s too much you’ll just get stuck on. You can plow through Tetris stacks of cargo crates, but guard posts are still impervious. Guard towers, which are made of iron, you can rip to shreds. But slightly thicker iron stanchions are a permanent roadblock.

The game wastes no time putting you into the seat of one of these mechs to start doing as much damage as quickly as possible. But if you’re picturing a big, lumbering, two-legged MechWarriors, then you’ve got the wrong idea. This thing is fast, for its size. And for a multi-ton wrecking ball, it’s agile, too. It’s on four “wheels” at the ends of four hydraulic spider legs. It has something like a nasty EMP blaster in one hand, and a massive Bavarium Splitter gun in the other. There are a couple variations on that design, but the left arm always comes with a grab-and-throw and force-push arm. That arm is at the nucleus of Mech Land Assault. 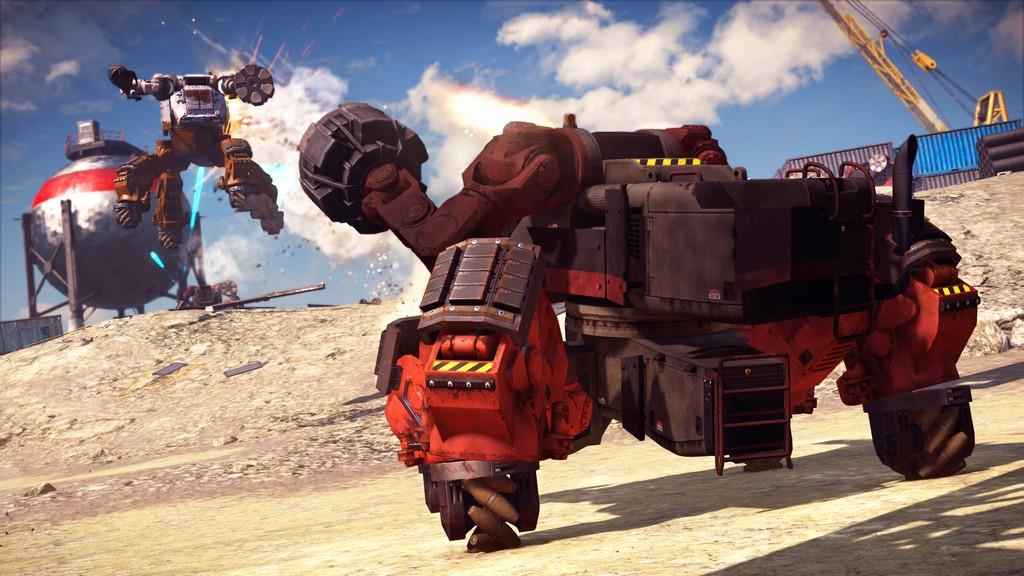 When you’re in a mech, ground troops don’t stand a chance. Vehicles don’t stand chance. And when they teach you to pick up and throw things like you’re using a Gravity Gun from Half-Life 2, then even those guard towers at 50 yards don’t stand a chance. The developers sprinkle those large freight container boxes all around the place to ensure you’ve always got “ammo” to throw around. As you unlock an assortment of challenges, beating those challenges gives you upgrades to the power, distance, and speed at which you do everything in that mech.

But as to why you’re here on Lacrima. Apparently, orange is the new blue in Land Mech Assault. In the plain Just Cause 3 campaign, good revolutionaries wear blue. But on this brand new island, you’re freeing orange-jumpsuited prisoners. These prisoners are being rounded up en masse by the Black Hand and eDEN Corporation—and you’re going to find out why. You may remember the eDEN Corporation from the first piece of DLC, Sky Fortress. They’re the folks you “liberated” an enormous flying aircraft carrier from. And yes, in true Rico Rodriguez fashion, you won’t necessarily organize an uprising, but you’ll blow the place up and get the people on your side. You’re the voice of the people, and the voice of the people lets big explosions do the talking.

Okay, Rico Rodriguez. Let’s do this. Just be aware that the amount of damage these mechs dish out really upsets the Black Hand military corp. Your wanted level ratchets up real quick. In the span of half a minute, you’ll likely have a dozen heavily armed and increasingly armored units pumping you full of bullets. If you stand still at any point in time during an attack, Black Hand soldiers can literally put you down in 10 or 15 seconds. Sooner if they brought a mech. So keep moving. 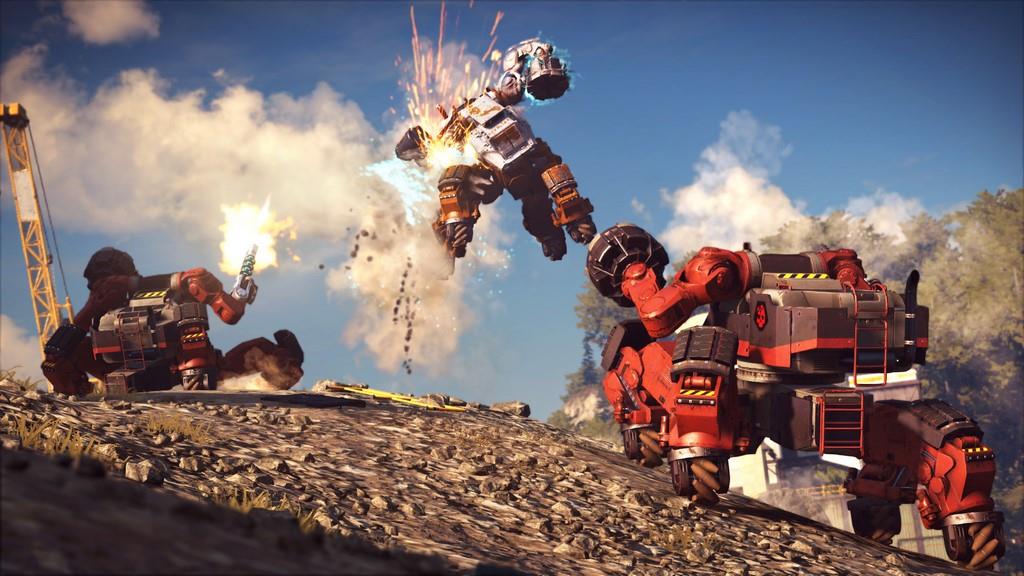 It seems lazy that we’re just liberating yet more provinces on yet another island. But sometimes just being Rico Rodriguez and blowing stuff up in the most ludicrous fashion possible is enough. There aren’t collectibles or citizens to get in the way—just like with Sky Fortress, for the most part.

But before you’ve liberated even one of the four provinces, the Black Hand makes its presence known. Overkill is the only way they play. Drones patrol the skies. Tanks seem to arrive even before the jeeps do. Mechs roll along the roads. And Black Hand soldiers duck and dive, hood-slide over vehicles, and generally make life miserable for Rico Rodriguez on a one-on-one basis. As usual, straight up shooting bad guys with a gun is one of the least effective ways of dispatching enemies.

I can appreciate the expanded gameplay. But Mech Land Assault is often beaten up by its own difficulty level. The island removes some of the simple pleasures of Just Cause 3, like sailing effortlessly over the landscape and making a few beautiful explosions across a clear blue sky. Then replaces that effortless fun with running and hiding and biting off more than you can chew with the authorities and dying. And reloading. You’ll be reloading kind of a lot. If you’re ready to be tested, then—right now—file away the explosive whimsy you’re used to and replace it with bruising punishment. People that like flogging themselves will like where Mech Land Assault is going. 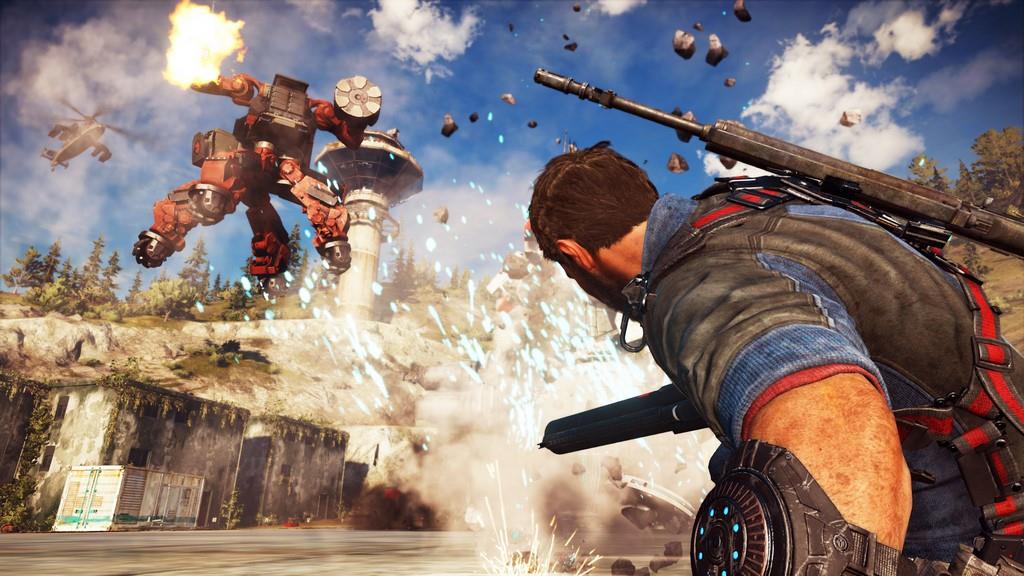 I almost forgot to discuss the story interludes. I almost forgot because they’re forgettable. The clever characters of the main story are absent. And the clever implementation of handpainted cutscenes like in Sky Fortress are likewise absent, for the most part. I mean, the handpainted cutscenes are there, but they’re underwritten, boringly drawn, and they don’t convey much more info than you could get from a 15-second audio log.

If the Sky Fortress DLC was all about fast, forward momentum, Mech Land Assault is all about the opposite. It’s about pushing stuff out of your way, or pulling stuff towards you, hopefully breaking it apart or making it explode in the process. It’s about spinning in circles and wreaking havoc, rather than wreaking havoc and making the enemy spin in circles. And don’t worry too much about the slowdown in frame rates. It’s worth it to make this many things go up in flames at once. What Sky Fortress did for flying, Mech Land Assault does for grounded explosions.

Mech Land Assault is not here to make friends. This piece of DLC is made up of some of the most fun—and some of the least fun—you’ll have in Just Cause 3. It’s harder to get your hands on a mech than it should be, but it’s a power trip every time you do.