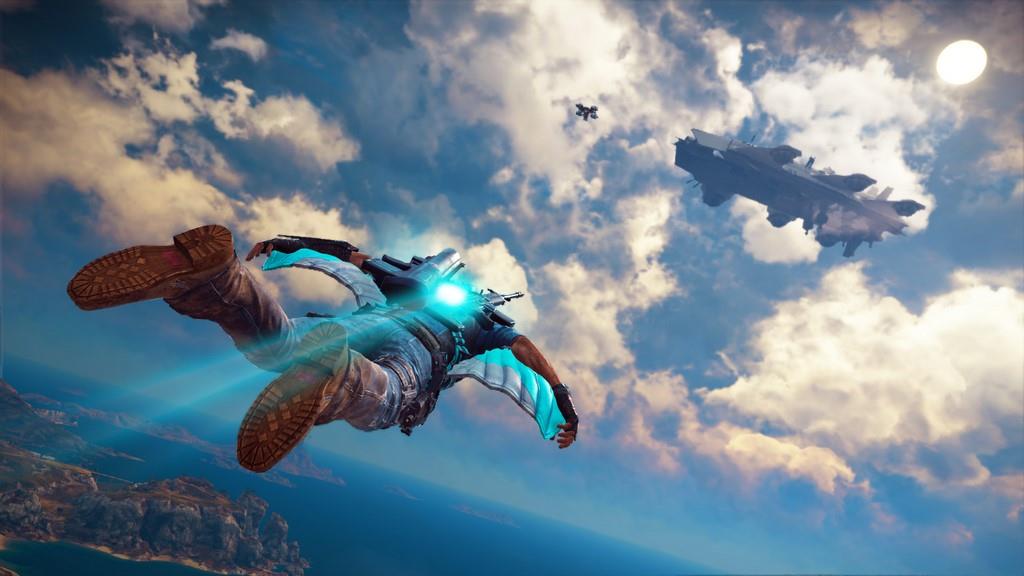 So, great, now there’s an airship hovering over Medici. This thing’s huge. It’s the size of a small province—you can see it from miles away—and it’s armed to the teeth with massive gun mounts and quadcopter private military drones the size of dump trucks. Picturing the airship as an aircraft carrier in the sky might be thinking a little small. It’s more like four aircraft carriers lashed together with giant downward-facing turbines to keep it balanced in the lower atmosphere. When you add the Sky Fortress downloadable content to Just Cause 3, you’ll see it there, high above the mountains of the big island, hanging like some massive Robotech Christmas ornament in the sky.

And what do you know? Our boy, Rico Rodriguez is taking it down. Does it matter why he’s taking it down? Not really, but if it matters to you, this massive airship is owned and operated by the eDEN Corporation, the embodiment of impersonal corporate calculations and callous business ethics. EDEN is here to extract Bavarium from the mineral-rich landscape, and they’re not too worried about the human cost of their actions. They’re good at occupying Medici, oppressing the populace, and exploiting the local natural resources. That’s about it. Opposing eDEN is one of the major reasons Rico has to go around every town, raising the revolutionary flag in the first place.

Sky Fortress is the first of three downloadable pieces of content from Just Cause 3’s Air, Land, and Sea season pass. The wingsuit and parachute, combined with the skyhook-tether thingy, is the best mobile suit combo you could hope for in an open-world game. You’re like a flying squirrel enlisted in the Army Rangers. But slap a little jet engine on there, as the Sky Fortress DLC does, and oh boy, you’ve now got an even better reason to never touch the ground again.

Once I hear eDEN is operating somewhere up around the big island, I plant a waypoint marker on the map and make a beeline for the bad guys. I rough up a pack of drones while a disaffected corporate suit radios me about how I’m being a nuisance.

I’m equipped with a spanking-new wingsuit. I’m basically a jetpack with work boots now. And the jetpack has an infinite-bullets machine gun attached. And infinite missiles. Both are on cooldown timers, but this is much better than tracking down that one weapons locker tucked away somewhere in some random town’s police station. It’s time to rip city with these new toys. 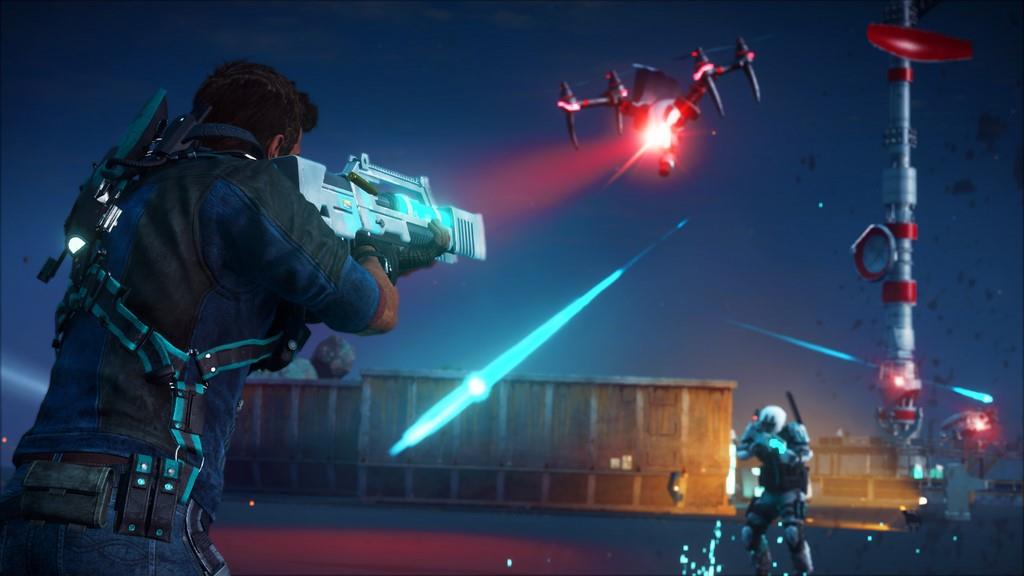 I follow a few straggler drones up into the night sky, toward the airship, pumping the trigger on my new jetpack wingsuit. The whole time, the corporate talking head is very good at labeling me as a criminal, a problem child that’ll have the full extent of the law brought down on me. As if (as if!) threatening lawsuits and jail time ever intimidated Rico Rodriguez. So, there I am, miles above the ocean at this point, taking a breather on one of the dozen or so floating platforms hovering around the airship. The cities far below light up Medici like little forest fires. Spotlights rotate on the deck, antennas jut out at severe angles, Bavarium tanks shine with their glowstick blue colors, neatly stacked or propped up in pylons. I’m ready to take on the eDEN Corporation’s base in the sky.

And it’s fun. Man it’s fun just blowing stuff up and jetpacking through the orange and red flames. It’s fun ripping up packs of drones with the mounted machine gun. And blasting at airship panels whose only purpose is to be a panel that gets blasted. Still, I would’ve liked to see a few different design decisions made along the way.

The challenges, for instance. EDEN Airship Master Tour I is a small nightmare, as far as starter challenge courses go. There’s a helicopter drop into two circular rings, while the third ring is completely out of sight—probably earning you a disqualification for “leaving the course”—and a steep climb up to a fourth ring, before cutting a frightening slalom through the airship’s underbelly of radar antennas, refuelling hoses, and pedestrian platforms. If those don’t get you, the 90-degree airbraking turns in the next section will. 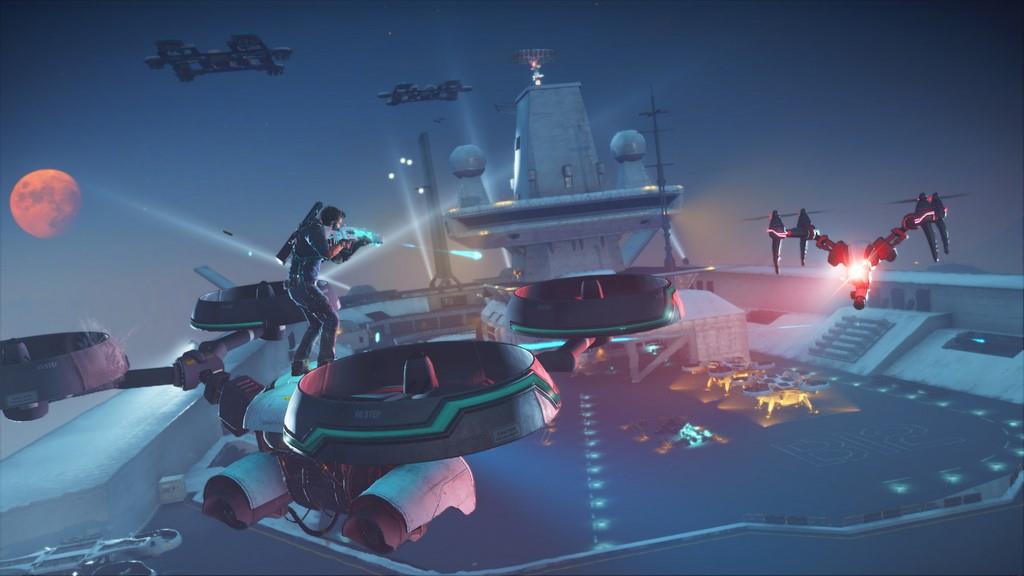 I frustrated myself a lot with that first flight master challenge. Until I decided to skip getting a maxed-out score and went over to the eDEN Airship Master Tour II. Whaddaya know, this one is literally a straight shot down the upper deck of the airship. Like, you’re pretty much just coming in for a landing, easy peasy. Why wasn’t that the intro to the airship challenges?

They still feel a tad out of place, but the challenges turn the liberation of Medici into Rico’s personal extreme sport. Like defeating the eDEN Corporation and the Sky Fortress is just some opening ceremony to his one-man X-Games. But that’s Just Cause 3 for you.

Sky Fortress turns out to be modest DLC in some ways. I feel like I could give eDEN Corporation an eveb bigger beating than I gave it. I do like the just-serviceable-enough story prompt for Rico to go on a mid-air rampage, packing his signature blow-’em-up style with him. Sky Fortress has some difficulty spikes you can impale yourself on. But that’s all part of the playground-like obstacle courses that make up Just Cause 3. They’re just difficult enough to not detract from the game’s handsomely explosive features.

Sky Fortress cranks up Just Cause 3’s bombastic effects more, if that were even possible. The addition of the jetpack wingsuit and Bavarium rifle make a video game-y video game even gamier. They change up the game enough—and in enough good ways—that I wouldn’t want to give back the new toys.