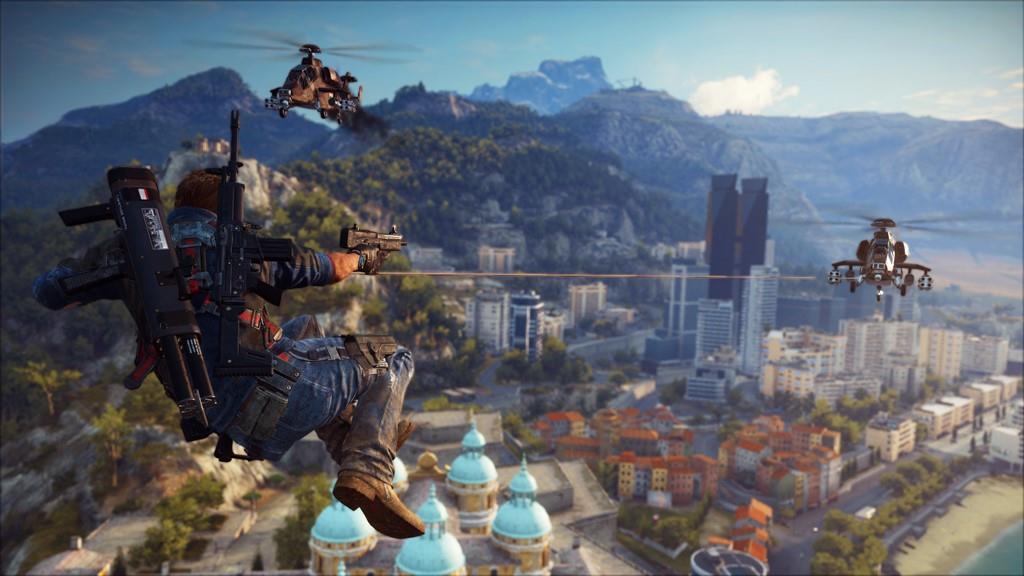 Just Cause 3 is the gamiest game I’ve gamed in awhile. It’s like a 400-square-mile game of The Floor Is Hot Lava, where you’re the one creating atom-bomb-sized clouds of rocket-fueled kaboom and doing it all from ziplining, parachuting, wingsuited heights.

You, Rico Rodriguez, are a Latino Rambo. In all practicality, you’ve got enough firepower to take down an island dictatorship—and that’s exactly what you intend to do. There’s a militant tyrant that needs deposing, his brutalist strongholds clawed deep into the Mediterranean archipelago of Medici. The people of Medici have the boot of totalitarianism stepping down on their neck, and hamfisted propaganda makes it hard to enjoy a Corona and lime on the beach, even with the amazing views. The people basically want their beautiful island nation back. Medici’s dictator is something of an elephant, but Rico knows how to eat an elephant. That’s right: One bite at a time. So, one outpost at a time, one oil-rich asset at a time, and one island at a time, Rico will be the rebel leader the people of Medici need to reclaim their homeland.

That’s obviously where you come in. You, as Rico Rodriguez, are here to replace the existing administration. You’re here to restore the people’s faith in themselves and in their land. You’re here to take back what was taken from them. And you’re going to do it by fighting fire with fire.

But amidst all the talk of revolution and restoration, Rico is, first and foremost, a pyromaniac. Well, that sounds crazy. Maybe “pyrotechnician” sounds a bit more professional. Regardless, on the outside, Rico is a big ol’ softy with a heart for justice and protecting the innocent. But on the inside, he’s a mercenary that’s really into demolition and destruction. He’s here to remind the current despot-in-charge of what happens when a populace just ain’t having it anymore. 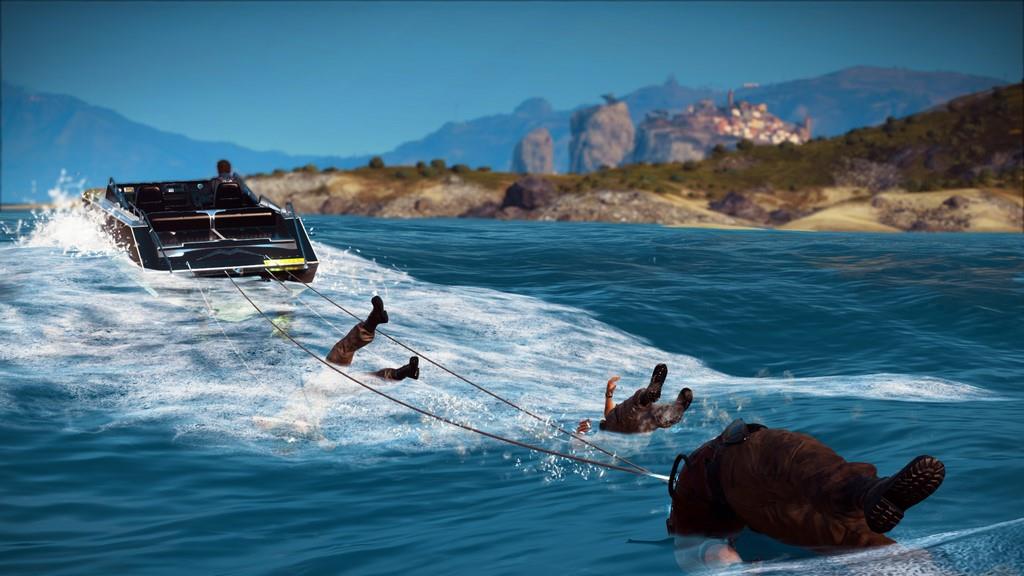 Just Cause 3 has the most wanton displays of architectural violence I’ve seen in any video game in years. It’s certainly the most destructive since 2009’s Red Faction: Guerrilla, and that one has never been topped in my book. But Just Cause 3 puts forth a thoroughbred effort to topple Red Faction, and throws down a solid rebel yell while doing it. You’ll get to blow up lots and lots of buildings, pump lots of lead into militant bullet sponges, and meet some colorful allies along the way.

Here, explosions are both destructive and cleansing. The fire cauterizes the wounds inflicted by General Di Ravello, the heavy-handed leader of this shackled nation. Since Di Ravello seized power, the streets have been filling with trash, the walls with graffiti, and the people with ill will. Di Ravello is not a nice person. He struts around in overwrought military uniforms decorated in ribbons and medals he’s pinned on himself. His citizens are cattle, and they are to be prodded, herded, and domesticated into this little hell he’s created in the middle of a Mediterranean wonderland. But this island nation is only the start. Di Ravello has his hands on a mineral called Bavarium that will help him take over the world.

Just Cause 3 is a sandbox in the most traditional (gaming) sense of the word. There’s a big map to explore (I mean big), a bunch of challenges and activities to engage in, and an overarching story tying it all together. 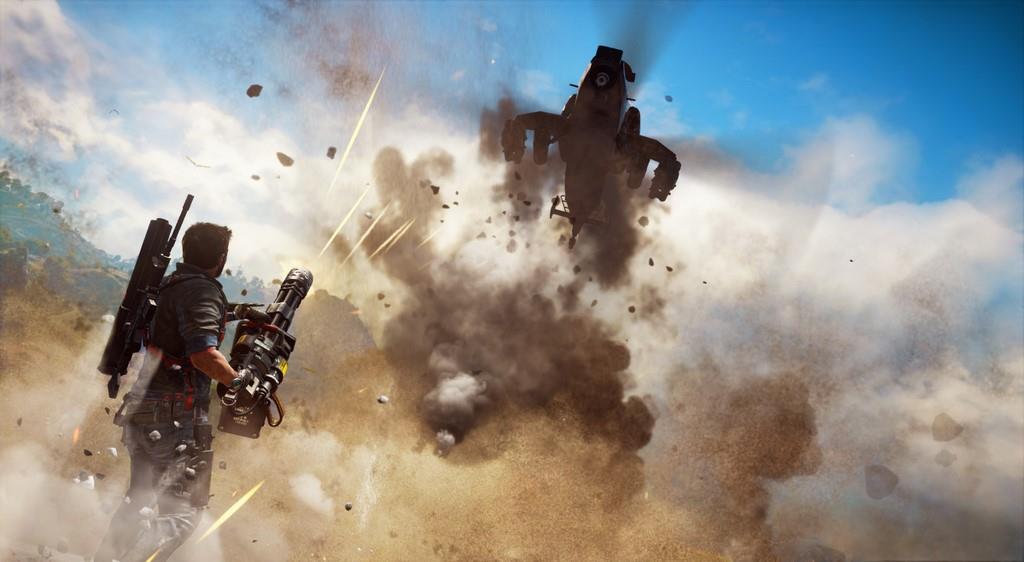 It would be easy to write off the story as disposable, but I don’t think it is. It’s infused with humorous characters but isn’t campy. It’s dramatic without being eye rolling. It’s marinated in violence but doesn’t get grotesque. The story beats are short and sweet, never overstaying their welcome. I mean, when I say the game isn’t “campy,” it’s still a big huge video game. Just Cause 3 gets away with more stunts and high-flying hijinks that, let’s be honest, even Hollywood can’t get away with much anymore.

There’s a natural progression of unlocks that equip you to deal with harder and harder scenarios. At first, it will suffice to zipline around and machinegun a few beret-wearing guards. Then you’ll learn to drive. Then fly. Knowing how to pull the ripcord on your parachute is a good idea, too, since the map’s verticality—from sea level up to the mountain tops, not to mention the skybox to fly over them—goes up a few kilometers as well. Don’t worry, though: Rico can jump from a 30-foot guard tower and still land safely on his feet. It’s those really long drops from, say, helicopters and cargo planes that could use a little assistance on the descent. 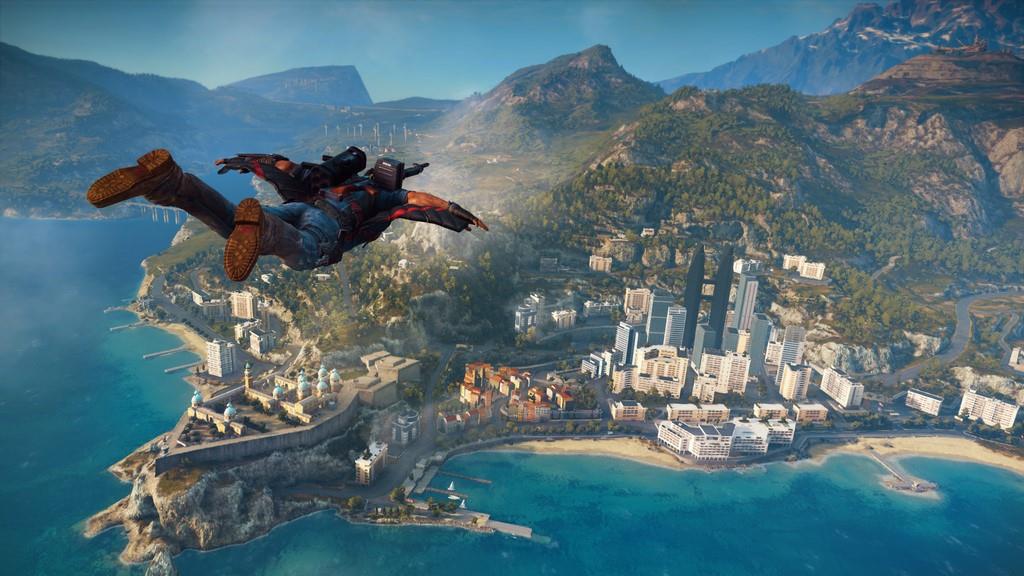 By far the most important gear in Rico’s inventory is his forearm-mounted zipline and the wingsuit. The wingsuit is amazing. Even taking a fast-attack chopper or fighter jet across the map isn’t as satisfying as learning the ins and outs of getting around with your wingsuit. The miles just fly by. Once you learn how to pull yourself along with your zipline while engaging the wingsuit, you’ll never look for a ground vehicle to get around in again. Unless, of course, you drive a car full speed towards a guard outpost, do a tuck and roll at the last minute, then watch the car turn into a 60 mph bomb-on-wheels. Almost everything in the game can be useful in that sense, when you put your mind to it.

There’s a rollercoaster of highs and lows in Just Cause 3. Ask me how good it feels to run a rampant sea, air, and land war against a central military installation for 30 minutes and then call it a win. I’ll tell you. It feels good.

But then ask me how it feels to fail after fending off five or six waves of military personnel carriers, tanks, corvette ships, and missile-firing choppers in an impromptu horde mode, only to be robbed of victory because your childhood buddy—whose name might as well be Leeroy Jenkins—likes to run frontal assaults on troop carriers. Well, go ahead. Ask me how that feels. 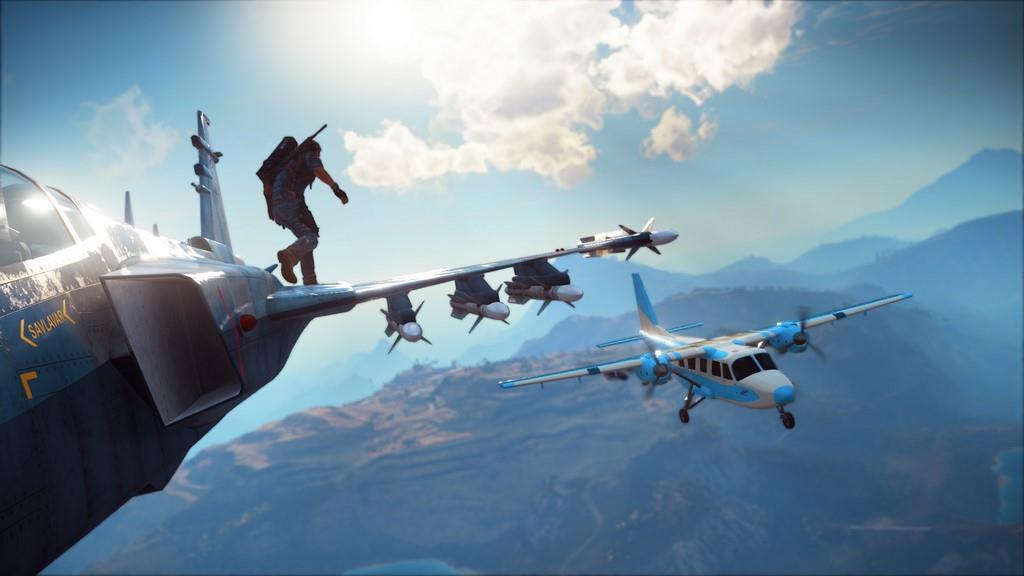 This isn’t a role-playing game: Rico himself doesn’t level up and gain plus-ones to his ability scores. But his gear does. There’s a deep enough tech tree here, in fact, to publish a small military strategy game as a spinoff. You unlock these gear mods by completing challenges. Challenges are kind of a Wii Sports collection of minigames for Rico—running races in cars, boats, helicopters, and with his wingsuit that have no bearing on the story. These challenges rarely amount to more than drive/boat/fly through this series of concentric circles. Good, now do it on this part of the island. Good, now do it again on a different part of the island. Faster this time.

These challenges, however, do unlock the gear mods, and some of those mods are rather valuable. I like the proximity triggers for my planted explosives. I love getting more tethers so I can latch more things onto more things and slam them together. Not to mention increasing the tether strength, so I’m eventually tearing scary-large structures right off their foundations and slamming them to the ground. But then there are other mods I completely forget about. Like precision aim that gives me an over-the-shoulder look at Rico’s line of sight; I mean, forget it, no one’s got time to go into a slow walk and precision aim in the middle of this conflagration. 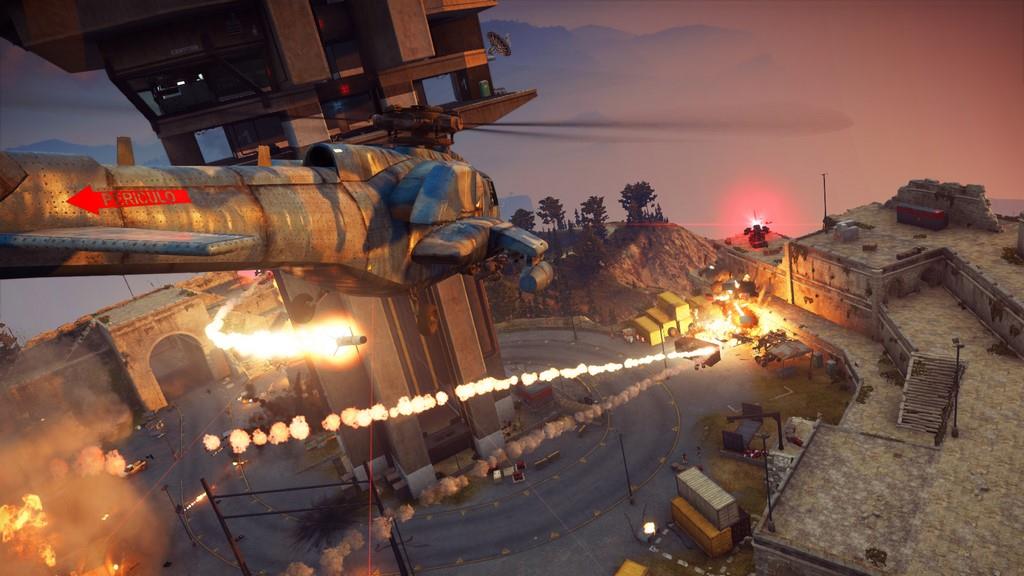 I tend to skip challenges, though, because there are a lot of instant fail states, and the loading and reload times in Just Cause 3 are long. The game seemingly comes scheduled with plenty of bathroom breaks. The initial load screen is, on average, two-and-a-half to three minutes long on PlayStation 4; although, I’ve had the online login process sometimes add another three more minutes of loading on top of that. The math is boring, but I can safely plan a five-minute activity between hitting Start and actually running around with Rico in the game world.

I speculate that the challenges are another reason why Just Cause 3 tries to keep you logged into Square Enix servers at all times. It wants to set up rivalries between you and everyone else thrown onto the leaderboards. It’s a small nightmare from time to time when the login connection is lost, then the game pauses to ask if I want to continue in offline mode. If I try to reconnect right then, who knows, the login could take several minutes. If I play in offline mode, the game pings the servers again and stops me every few minutes with a hard pause to keep asking me if I want to try logging back into Square Enix’s servers. That sucks. 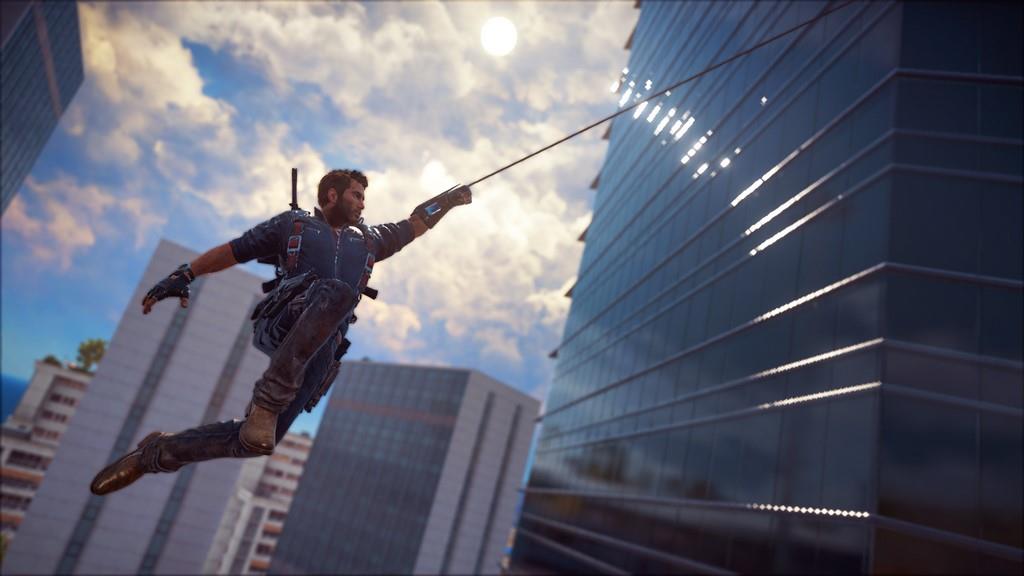 Hey, it’s a big sandbox. I get that. And, when it comes to loading screens, the game isn’t just reloading a static stage. The load screens have to, a lot of the time, put a lot of pieces back together that you blew up, and sweep away the rest that isn’t reassembled. Just Cause 3, however, is very, very good at saving your progress in real time through your adventure. The autosaving is a lifesaver in and of itself. Sure, it may take 45 minutes worth of assaulting, dying, and reloading to finally win over that huge military installation, but you never have to start from the beginning once you start wiping out high-value targets. You simply reload, which is automatically at a safe distance, with all the important targets you took out still taken out.

So, yes, the load times are long in between. But they’re doing an excellent job during.

Between things to blow up, the topography on Medici runs from sunny, sandy beaches up to crisp, cold mountaintops. The weather ranges from Caribbean blue to Dairy Queen Blizzards. Despite the Spanish guitar soundtrack, it’s not all sun and tropics in Medici, but its inherent beauty makes the orange-and-black explosions all the more beautiful themselves. 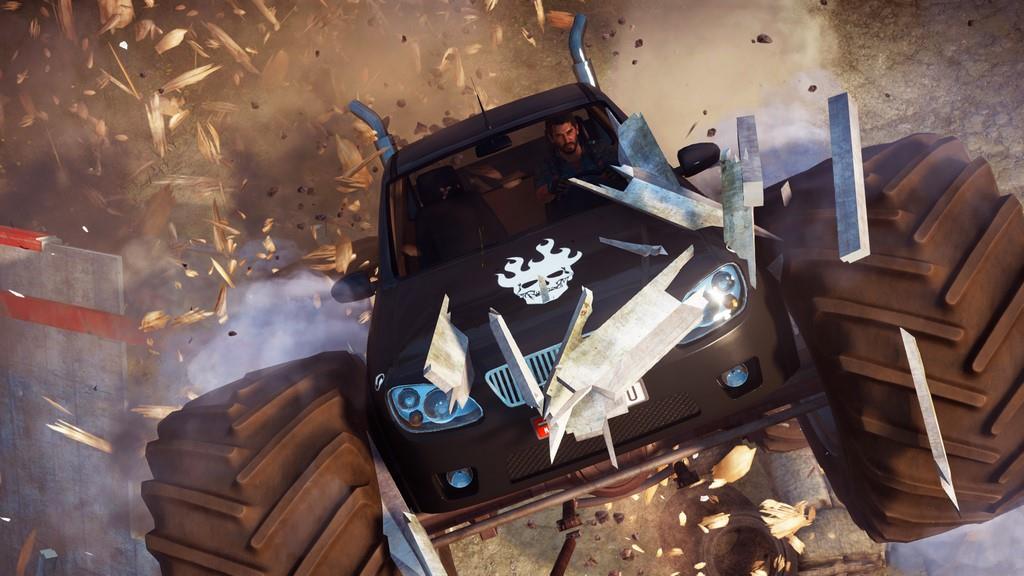 There’s plenty of seawater between the increasingly huge landmasses, but yes, you may have heard: Just Cause 3 is comparable in size to its predecessor, the 400-square-mile Just Cause 2. Medici’s story is one of oppression devolving into anarchy. A story where you, Rico, will have to restore the people’s autonomy, their faith, and their party-hardy atmosphere across those 400 square miles. Get to it, amigo.

All in all, I've had a blast—har har—flying high in mass explosion simulator Just Cause 3. Attaching militia to oxygen cylinders (and blowing them up), hijacking attack choppers in midair (and blowing them up), and ramping Jeeps into watchtowers (and blowing them up) are three very important things I keep refreshed at the top of my to-do list. I'd say the gameplay gets a little bit lather, rinse, repeat, but Head & Shoulders was never able to turn me into such an unstoppable source of destruction. Can explosions be art? I'm giving the question serious consideration.

Just Cause 3 gets away with more stunts and high-flying hijinks that, let’s be honest, even Hollywood can’t get away with much anymore. Come for the explosions, but stay for the, well, stay for even more explosions.