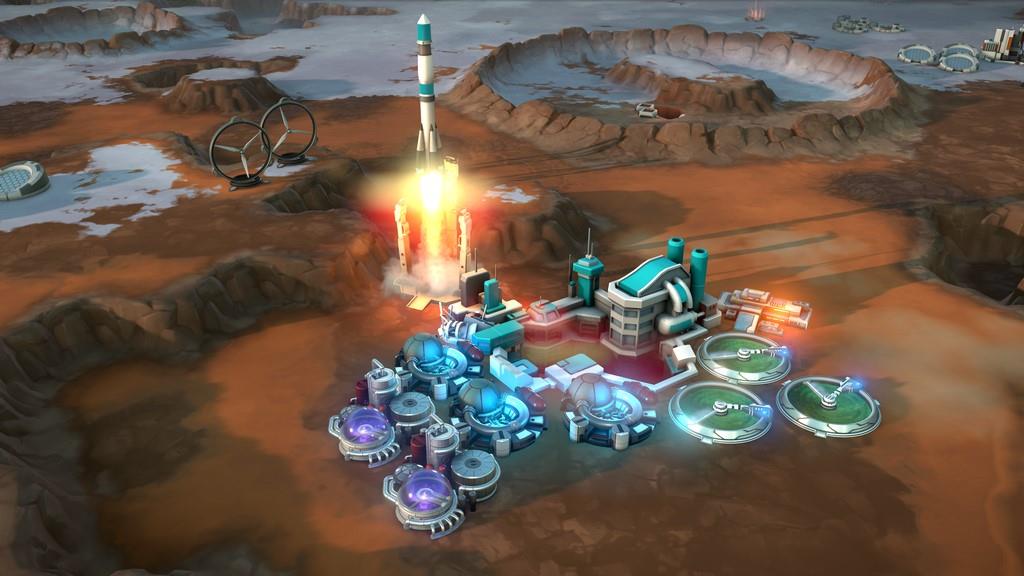 Written by Charles Husemann on 4/28/2016 for PC
More On: Offworld Trading Company

You may be one of the millions of gamers already familiar with Soren Johnson's work. Have you played Civilization III? How about Civilization IV? Perhaps you even got sucked into Spore like many of us did, crafting unique creatures, vehicles, and buildings for days on end. Soren Johnson built the entire AI for both Civ III and IV, so he knows a thing or two about programming from the ground up. The first game from Mohawk Studios (which he opened in 2013) is Offworld Trading Company. It's a real-time strategy game, but it's not quite like any RTS you've played before: It's an economic RTS.

We chatted with Soren Johnson, asking questions about his latest endeavor. You can see in his answers the long train of thought that informs his design process. And even how Offworld Trading Company started off as something more like Railroad Tycoon, but ended up in far less charted territory. Soren's own anticipation is palpable in his words, with the official launch of Offworld on April 28 being so near.

When did you first get the spark of an idea to make this game?
I've always wanted to make a strategy game that focuses on economics instead of war, partially from the games I enjoyed as a kid, such as Railroad Tycoon and SimCity, and partially because there simply haven't been any good competitive economic video games since M.U.L.E.—which is a long time ago!

How has the game concept changed since you first came up with the idea?
I go into detail on how the concept changed extensively in the game's Designer Notes, which are published on my blog designer-notes.com. Sorry, a bit on the nose, I know. Basically, the game originally felt a lot more like Railroad Tycoon set on Mars, in that the player transported resources to different neutral colonies and spent a lot of time micromanaging her shipping lanes, which you managed by hand. Also, the game had more of a traditional real-time strategy feel in that the player controlled individual units, whether scouts or engineers or even pirates. Eventually, we stripped much of this away to get to our current game where each player has his own HQ and only places building with no unit micromanagement.

Offworld, on the surface, has most of the elements of a 4X strategy game. There's exploration, expansion, and exploitation. What does extermination look like in Offworld?
Players exterminate each other in Offworld by buying them out on the stock market. Indeed, buying into another player early is a bit like rushing in a traditional RTS while buying up one's own stock is turtling and skipping stocks to upgrade one's HQ is booming.

Also, the black market provides a lot of tools for slowing down opponents, such as mutinies (steal a building), dynamite (destroy a building), EMPs (freeze nearby buildings), Pirates (steal from shipping lanes), and so on. The Hacker Array can also ruin a rival's profits by triggering an artificial surplus that drives down the price of their most profitable resource. 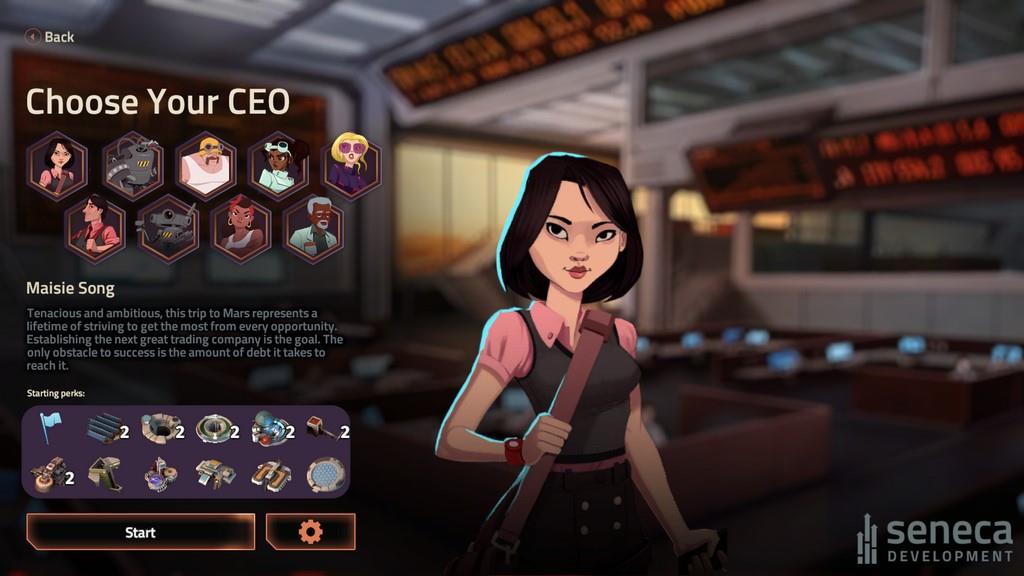 What's one valuable gameplay or development lesson that you brought to Offworld from your Civilization days?
We had an extensive pre-alpha test period for Civ 4 that started 18 months before shipping; getting player feedback that early made a huge difference in the quality of the product. Thus, I was certain that we wanted to do the same thing for Offworld, and we shipped the game to our founders about 21 months before we shipped the final version, and their feedback has again been crucial.

Civ goes out of its way to put faces on its nations' leaders and advisors. What does Offworld gain by keeping faces out of it?
Actually, our characters (the playable CEOs of each HQ type) are a key part of the tutorials and the campaign; as content as opposed to gameplay, they were one of the last things to be added to the game, but they are quite prominent now. Having said that, characters were never going to be as big a part of a 20-minute real-time game as they are of a 10-hour turn-based one.

What has been the hardest part of the development of the game?
The hardest part of Offworld was not knowing which conventions of real-time and 4X games to use and which ones to ignore as we are in such new gameplay territory. There is no other game like Offworld, so we sometimes felt like we had to create a new genre from scratch. 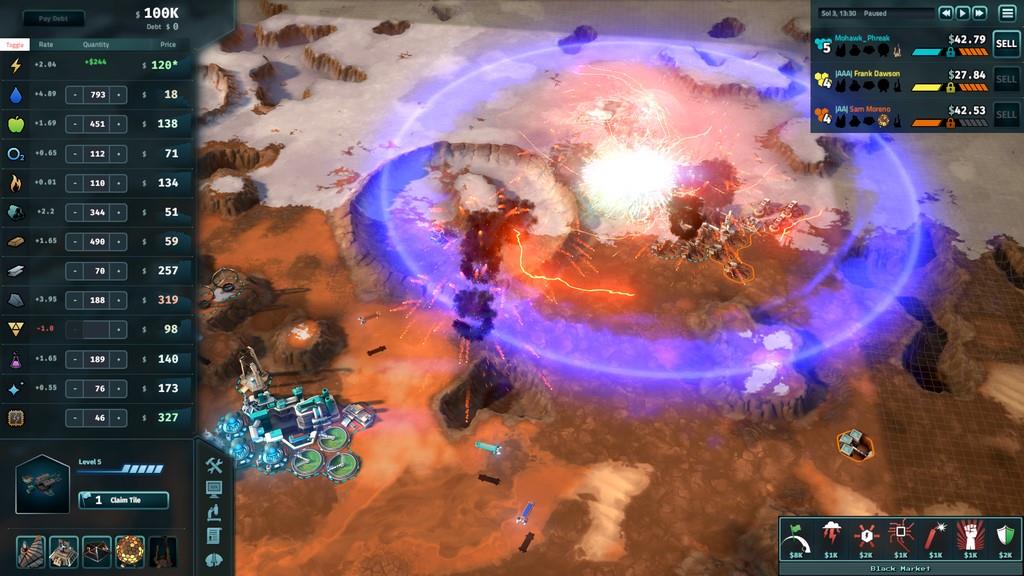 Offworld launched 10 major beta updates based on feedback. What's one piece of feedback that was so obvious you can't believe you didn't think of it yourself?
The loudest piece of feedback we got after releasing on Early Access that shouldn't have been a surprise is that competitive multiplayer players did not like the randomness of exploring a black map to decide where to found. They felt that games were being decided by simply who found the best spot first; competitive players generally dislike luck being an important part of a game's start. Thus, we added the Reveal Map mode which starts with the map fully revealed, and an auction to determine who founds first; this mode is now the de facto standard for the MP community.

How do you balance the feedback you received from Early Access with your vision of the game?
Generally speaking, most feedback is either addressing the game on its own terms—and is thus very useful—or is about an imaginary game in the players' heads that is not Offworld but is about economics or Mars or something else. The latter type of feedback might complain that our stock system is not realistic enough or that real commodity markets don't work the way they do in our game, and we of course agree but are also not trying to make a game where realism is the ultimate goal.

Offworld Trading Company's tutorial tells a story of humans freezing out their humanity—and robots grasping at what it means to be human. Who wins in the end?
Our story is open-ended; we just setup the environment, setting, and characters, but the players' actions are what's really important once the game starts. 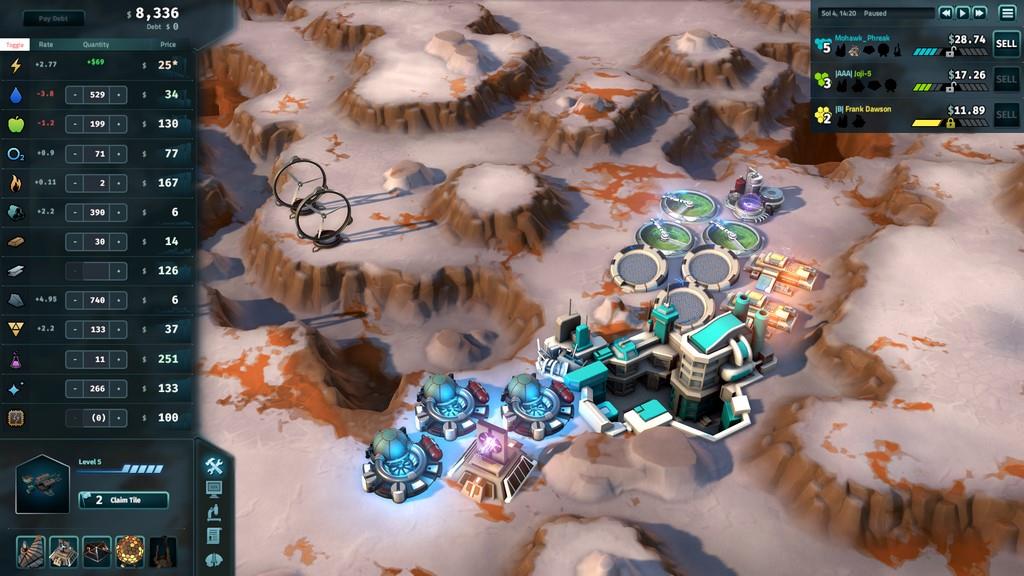 People will get their hands on the game soon, what's the first thing that people should try out?
I would recommend new player go through the tutorials and then try the practice games which put the player through each of the HQs and the first five difficulty levels step-by-step. After that, it depends on whether a player is more single-player or multiplayer oriented. For single-player, I would recommend jumping into the campaign and trying to win as each of the nine CEOs in the game. They all play very differently, sort of like the different ships in FTL. For multiplayer, I would recommend trying the Daily Challenge before jumping into Ranked Play as it uses the same settings: Reveal Map, Random Prices, No Pausing.

Is there anything we missed that you think is important?
We have some unusual features that are easy to miss. First, our Daily Challenge and Ranked Play leaderboards let the player watch replays of other players' game, which is a great way to learn new strategies. Also, we allow people to play single-player skirmish games while waiting in the queue for Ranked Play. It will auto-save and allow players to continue later after a match is found.

Thanks for taking the time to chat with us, Soren. And best of luck with Offworld Trading Company's April 28 launch on PC. Our official review will coincide.