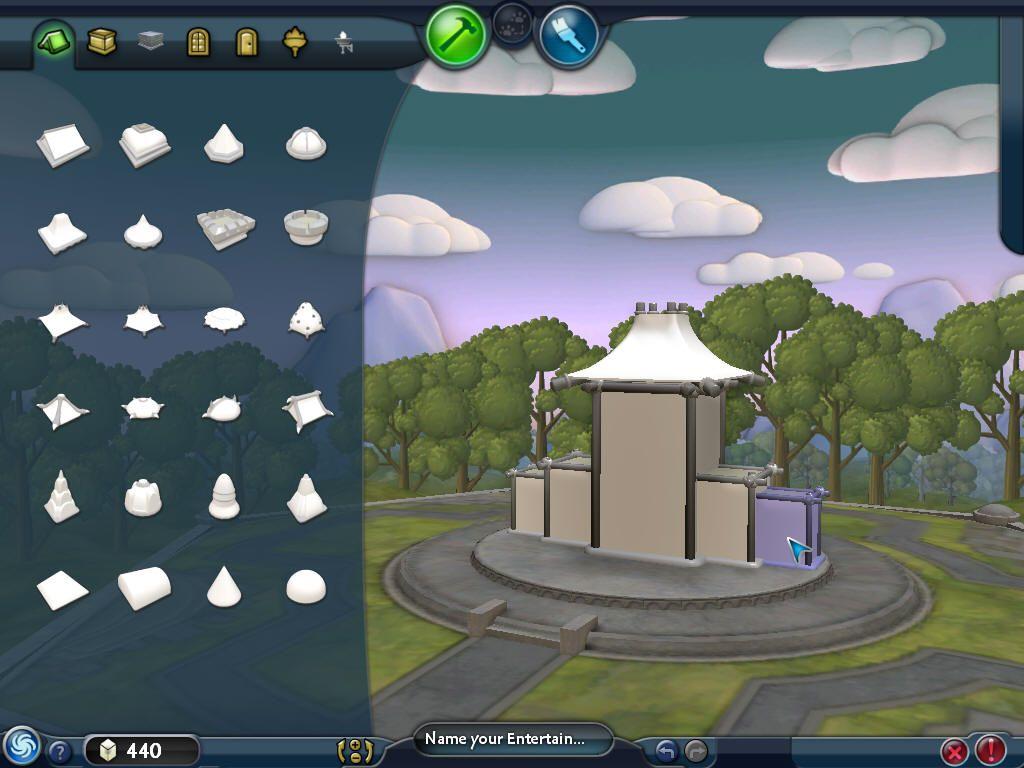 Written by Randy Kalista on 9/24/2008 for PC
More On: Spore
Powers of 10. The 1977 documentary written and directed by Ray Eames, along with her husband Charles Eames, is the now famously-cited inspiration for Will Wright’s “SimEverything”: Spore. In the video Powers of 10, the relative scale of the universe is depicted in orders of magnitude, with the camera first resting on a view one meter across: a man reclined on a picnic blanket. Then the camera begins a relentless zoom-out sequence, pulling away to show a view ten meters across, then 100 meters across, 1000 meters across, and continuing until the field of view is 1024 meters -- or 100 million light years -- across: the width of the observable universe. From that unfathomable width, the camera then begins an equally relentless zoom-in, all the way back down to that man reclining on a picnic blanket. The zoom continues into his hand, between the cracks in his skin, until the camera is viewing a carbon nucleus at a range of 10-18 meter.

Will Wright was 17 when the Powers of 10 documentary was filmed, and he’d recently graduated from Episcopal High School at the age of 16 (with an atheistic view of life intact). It remains undisclosed exactly when in the past 31 years Will saw the film, but the five-year developmental cycle for Spore may not be telling the entire story. It’s feasible that Spore, in Will’s gigantic brain, had been simultaneously hibernating and maturing for the past three decades.

And, from the very moment you crack open Spore, that maturation of his ideas show. The marriage of ‘wow’ and ‘whimsical’ is musical in its very design, with an interface that is instantly recognizable from his work on SimCity and The Sims. Will’s desire to lower the entry fee for all comers, from novices to veterans, is apparent and purposeful. With that in mind, Spore renders itself as a template for mass market appeal through a calculated exercise in restraint. 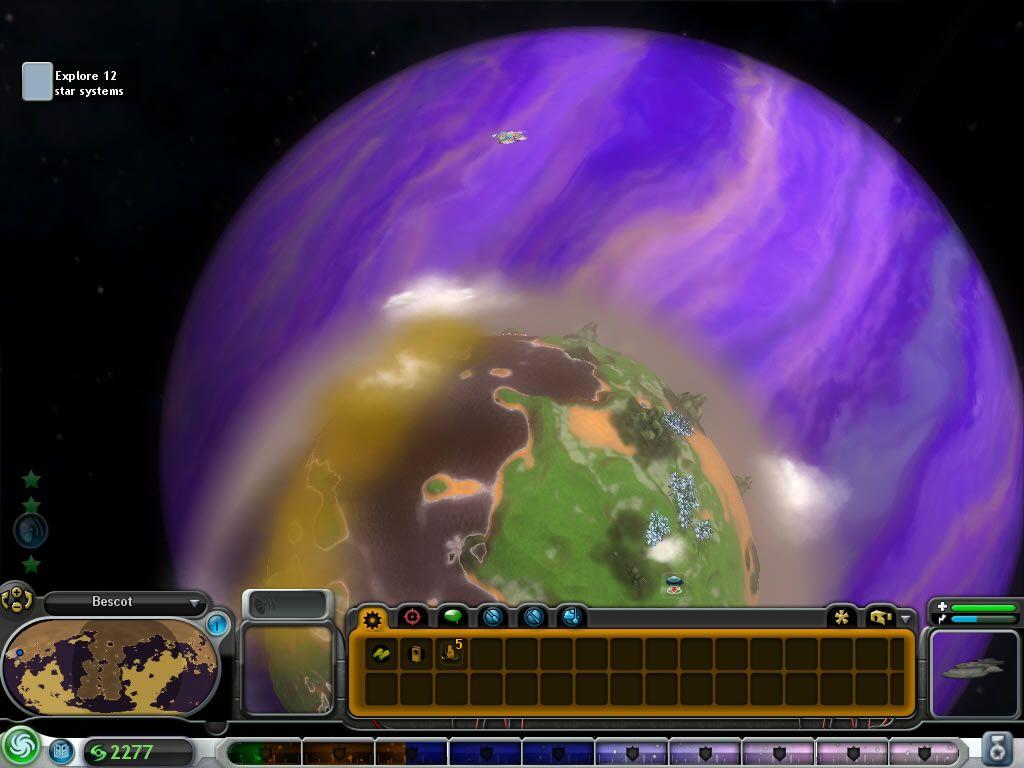 From the fascinatingly simple-to-manipulate 3D modeling tools, to the mousewheel scrolling that takes you from a planet’s surface all the way out to intragalactic travel, Will does something counterintuitive to the lot of hardcore strategists in his audience: he simplifies. And he simplifies in spite of that hardcore audience’s self-indulgent needs; he doesn’t pander to them. At least not in the way they think he should. But in case you forgot, Will knows complex -- SimEarth, SimLife, SimAnt, and the aforementioned SimCity -- so don’t make the amateurish mistake of thinking Will Wright doesn’t know how to make complex. And if I’d actually had to fight with a full SimCity toolbox during the Civilization stage of the game, then a stamped, self-addressed envelope containing a strongly-worded letter would already be in the mail to Will Wright’s address. That brazen level of complexity would serve as a bona fide roadblock in the smooth-running glide of advancement in Spore.

Here Will masterfully hides that complexity behind the Wizard of Oz’s curtain. And the mark of this true master is that he makes his craft look easy. But not only that, he capably puts it into your hands and makes it look easy from your perspective too. That’s where he has us all fooled. There’s far too much here to break down into its individual compounds. There’s enough here for us to scratch our heads and wonder (when this game was originally slated for a Holiday 2006 launch) what exactly took so long to develop?

Was it the Cellular stage, with its flOw-with-a-grander-purpose and immediacy? Was it the Creature stage, with its jolting and hard-to-swallow evolution of feet and legs? Was it the Tribal stage, with its 2001: A Space Odyssey discovery of sticks and stones? Perhaps it was the Civilization stage, with its land-grabbing and resource hogging? Or maybe it was, after all, the Space stage, the seemingly-endless endgame where you play the role of intelligent designer amongst the myriad planetary bodies among the stars?

And the stages tend to advance in powers of ten as well, considering both the diminishing simplicity of your goals and the scope of your mission. While survival and perpetuating the species is always at the core of your actions, the pool gets deeper the further you stray from the ocean depths and stray into the sea of stars above. 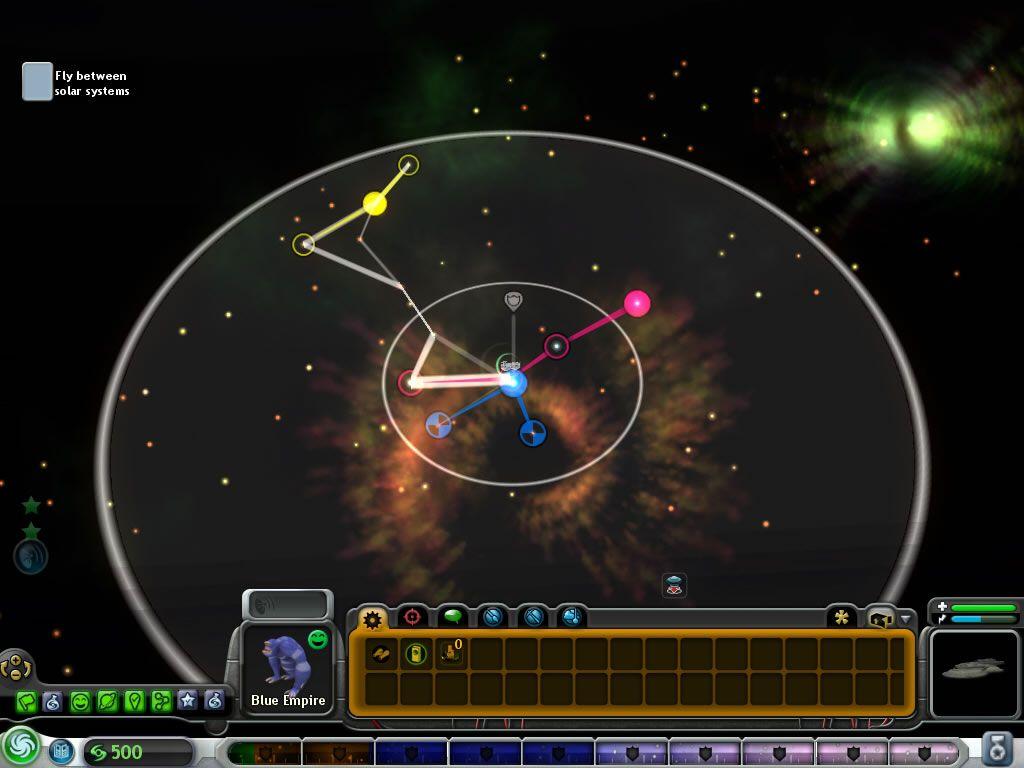 The Cell stage is the shortest and most visually breathtaking. Tidal currents ebb and flow as your creature grows in stature and survivability, while you constantly ‘level up,’ persisting towards the water’s surface. Your only physical mantra is to keep moving, even if you’re a carnivore, because there’s always bigger fish that’ll fry you if you grow sedentary. Until one day in your millions-of-years-long evolutionary cycle, you realize that you’re the big fish now and you’ve outgrown the pond. You can linger as long as you’re able in the Cell stage -- a stage worthy of its own standalone iPhone game, Spore Creatures -- but inevitably you’ll have to come in from the sea sometime: land, ho.

Even through the sentient stages, as you climb the ladder from shore walker to land cruiser to global power, the underwater aesthetic rarely relents, as spores and space dust keep themselves airily buoyant above the landscape. The snowflake-sized floating particles make your journey a soaring one, long before you design your first aircraft, and even longer before you take that first fateful liftoff into the stars.Through the epochs, your creature grows and grows, until one day it develops the technology to “return” to outer space -- after all those millennia ago, crashing as a simple-celled creature in the ocean, encased in a meteorite. And once you’ve attained space travel, the camera pulls back even further (powers of ten) until a sense of déjà vu strikes, and you look and feel like that simple-celled creature paddling for survival in that gigantic body of water all those millennia ago. Only now you’re in a spacecraft capable of faster-than-light travel. And that gigantic body of water is the Milky Way. Your rivals in the galaxy (and you) no longer grow physically, but grow territorially, enlarging not through tissue and muscle growth, but through crossing entire parsecs and colonizing solar systems.

The scope becomes daunting, by any stretch of the imagination. And where the journey began with evasion and hunting, it ends with micromanagement and democracy. Or missiles and laser fire, if that’s your particular brand of politicking. 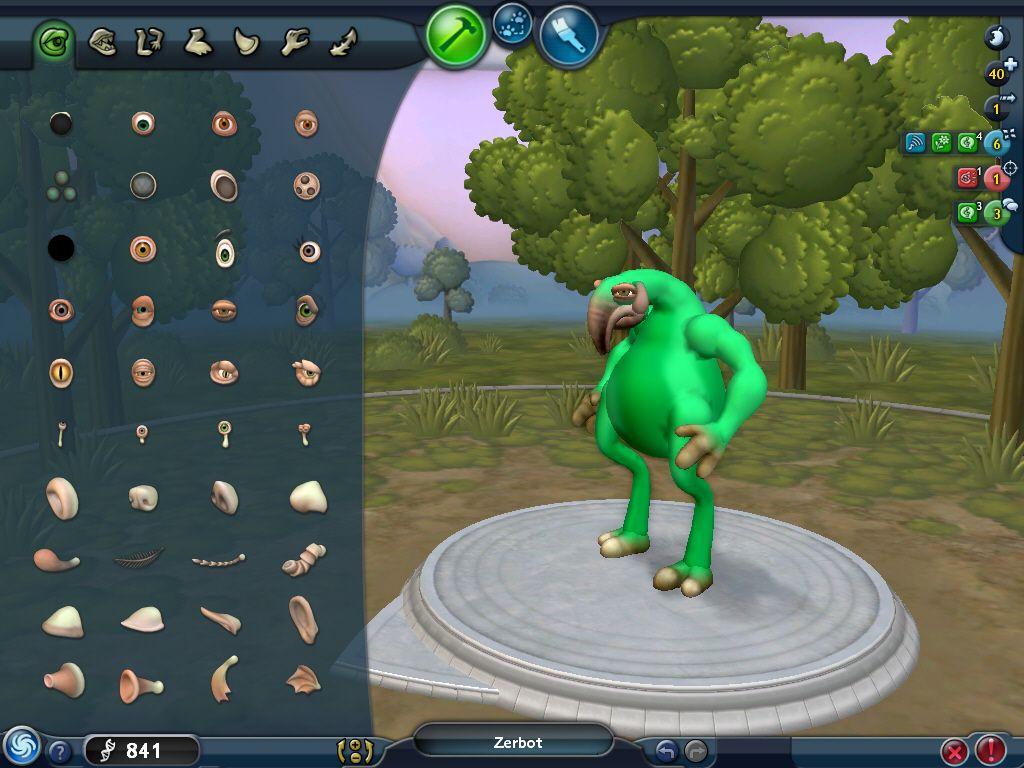 While the physical evolution of your creature feels stunted and superficial between stages (pull off a superfluous cilia here, tack on a set of ostrich legs there) the shifts in a creature’s social makeup are well-oiled and invisible unless you seek them out before each level’s conclusion. The evolution of ‘character’ over billions of years -- between socialites and predators, friendly and aggressive types -- operates with a seamlessness that the BioShock team should take notes on (versus that game’s “do good things for little girls” or “do bad things to little girls” dichotomy of choices). Further, Spore’s no-hitching gear shifts between developing an economic, militant, or religious society is an excellent tutorial for the good/neutral/evil character development that Mass Effect’s team should be scribbling onto their notepads (as opposed to Mass Effect’s bifurcated push-up-for-good-answer, push-down-for-bad-answer Q&A sessions).

Couple all of these stunning developmental achievements with the massively single-player community-sharing tools, and you’re introduced into a creative spirit’s polygamist paradise where creature-swapping is commonplace and your offspring could be rendered extinct in another player’s universe, or stomping as a gargantuan ‘epic’ creature across another’s tribal grounds. All of this community interaction takes place with or without eagle-eyed monitoring, as you soar ever closer to unlocking the “42” achievement when you finally reach the galaxy’s center (hat tip: The Hitchhiker’s Guide to the Galaxy).
Each game of Spore applies something of Occam’s Razor as a developmental guideline at first: The simplest gameplay approach is often the best. But, by powers of ten, a creature’s scope of responsibilities, needs, and capabilities grows by orders of magnitude, as do the longer-lasting effects in a player’s mind.