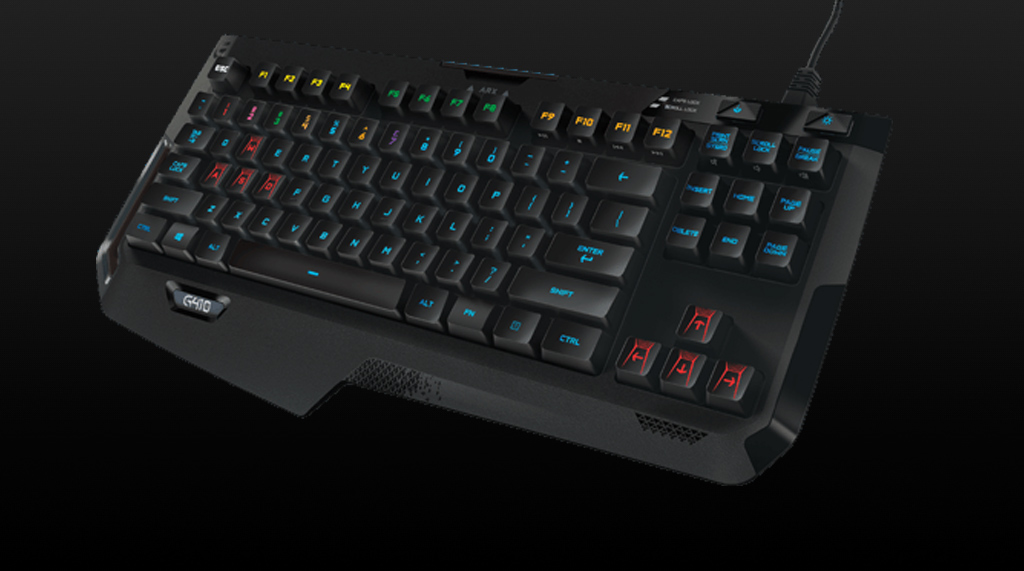 A few months ago, I took at look at the Logitech G910 Orion Spark RGB Mechanical Keyboard and found it to be a nice, but flawed product. I really like the Romer-G key was nice, but didn’t like the different key caps scattered throughout the keyboard. Logitech’s taken the Romer-G keys and put it in another gaming keyboard catering to those on the move.

The Logitech G410 Atlas Spectrum is a tenkeyless keyboard, meaning that the the numeric keypad isn’t included. With the removal of that area, the keyboard’s footprint shrinks by about 25%. Compared to the G910, the G410 also does away with dedicated media keys and reduces the size of the asymmetrical wrist rest. It’s built to be a very portable gaming solution, thus the reduction in size in a few areas.

The feeling from pressing the keys on the G410 is on par with the G910 since they used the same Romer-G switches. The Romer-G’s a mechanical switch with an actuation point of 1.5mm. You don’t need as much force to actuate the keys and they are also quiet when pressed. Illumination comes from the center, eliminating light leakage. Logitech’s pretty proud of the Romer-G design and they’re made to compete with the likes of the Cherry set that’s has become very popular with gamers. I’ve been using the G910 and the G410 the past few months and they are one of the nicest keys I’ve ever typed on.

Besides the removal of the numeric keypad, the G410 also does away with programmable G keys. The line of thinking was professional gamers don’t use the G keys and to keep the smaller footprint, the G keys had to go. I’m one to use a few of the G keys so it was a little disappointing to see it missing from this keyboard, but I understand what Logitech was going for.

On the G410, Logitech has made the good decision to use a more traditional keycap design rather than the faceted ones on the G910. This made it a lot easier to type from the get go than the G910. The uniform keycaps made the G410 feel more natural to type on and I had no problems getting used to the it when gaming or doing work. 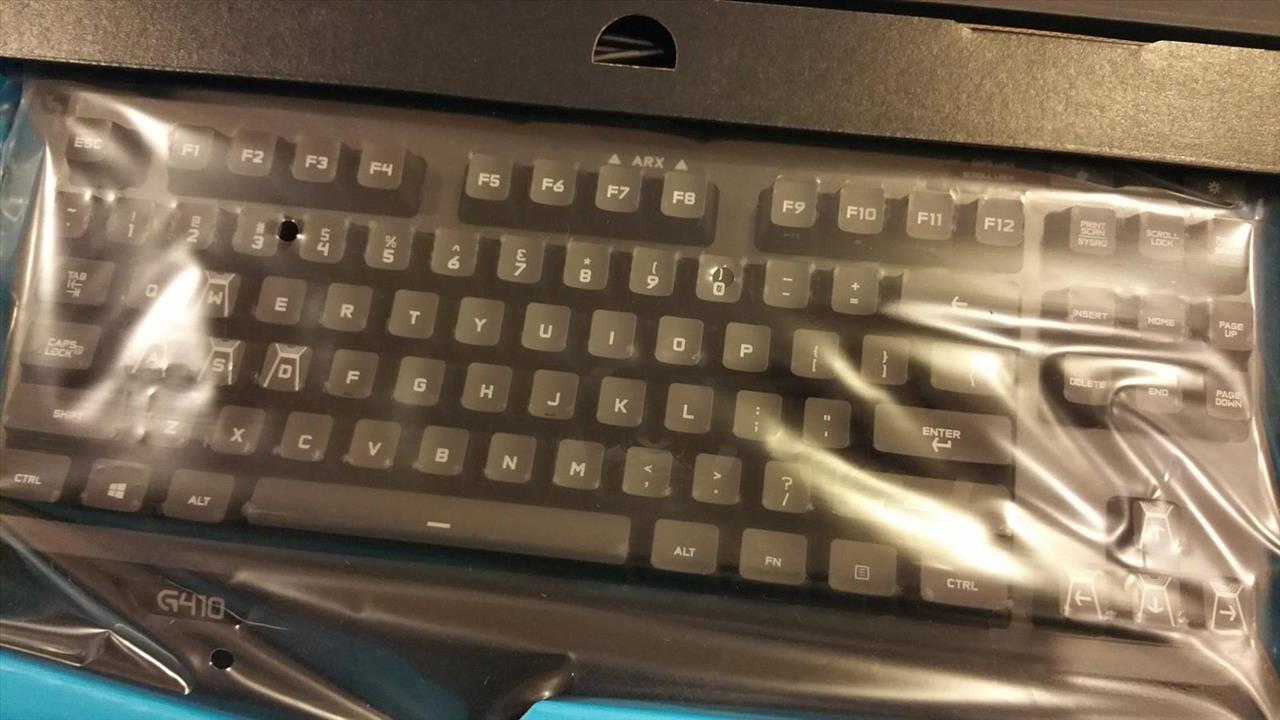 One of the things I wasn’t a fan of was the asymmetrical wrist rest. It is pretty small on the right side and I’m one that would rather see a more sizable wrist rest. But, you have to think of the use case of the G410 being a portable, high quality gaming keyboard with space being a premium at some events. In that case, having a lesser wrist rest on the right side makes sense as most gamers use the WASD area with their right hand on the mouse. If you’re looking to use the G410 as more of an everyday keyboard though, purchasing a third party wrist rest might be a good idea in order to type more comfortably.

If you liked the lighting on the G910, then you’ll also like the G410 as well. As mentioned earlier, the light emits from the center of the key and produces a nice clear, bright light. You can really do some nice customizations with the software that Logitech provides and some games will take advantage of the light to give you some visual cues. For example, when being chased by cops in Grand Theft Auto V, the function keys will flash red and blue to let you know the police is looking for you. I thought the lighting was very well done on the G910 and the G410 doesn’t disappoint.

As with the G910, the G410 features a tablet/phone dock that Logitech calls the Arx dock. While the G910 had a pullout tray, the G410’s Arx dock can be removed entirely from the keyboard base and placed anywhere you like. This allows you to have a lot more options of where you want to place your mobile device and not just locked to the top area of the keyboard like on the G910. The Arx software runs on either Android or IOs and provides some information on your system such as your computer’s memory and CPU usage. You can also launch apps with the software and change some of your hardware setup. The Arx software can be finicky at times on Android and I’ve had it crash a few times here and there, but when it works it works well. 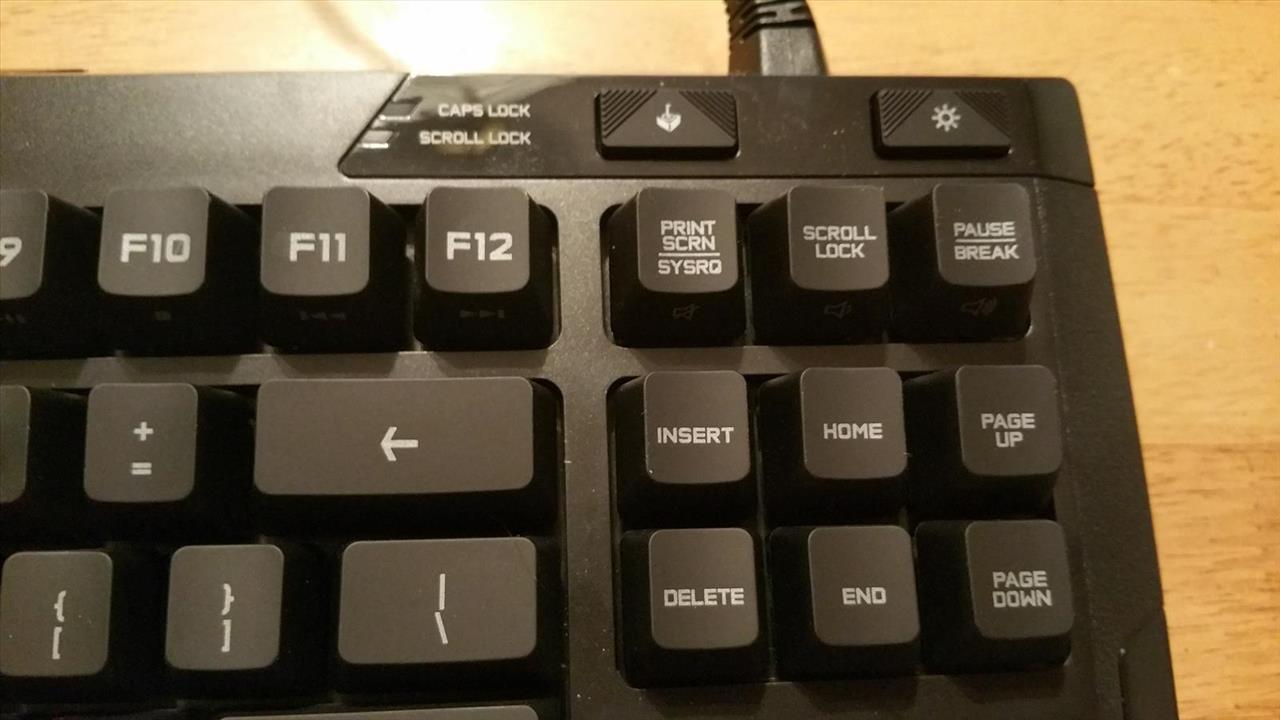 I put the G410 through its paces from games to development to writing and as you can probably deduce, gaming is where it excelled. The physical design along with the great feeling keys made for a very smooth gaming experience. When using the keyboard for long periods of programming in Visual Studio or writing in Word, that’s where the lack of a symmetrical wrist rest hindered my output. But, this time around, the keycaps weren’t something I had issues with.

The Logitech G410 Atlas Spectrum comes in at $130 so it makes it a pretty expensive gaming specific keyboard. If you do go to a lot of events and need to move your computer around or lack some space, then the G410 is for you. It’s a high performing keyboard with great feeling keys. A few design decisions will keep it from being your main keyboard, but as a travel keyboard, the G410 is a good buy.

A nice portable gamer's solution, the keyboard's a little expensive for the purpose of just gaming.