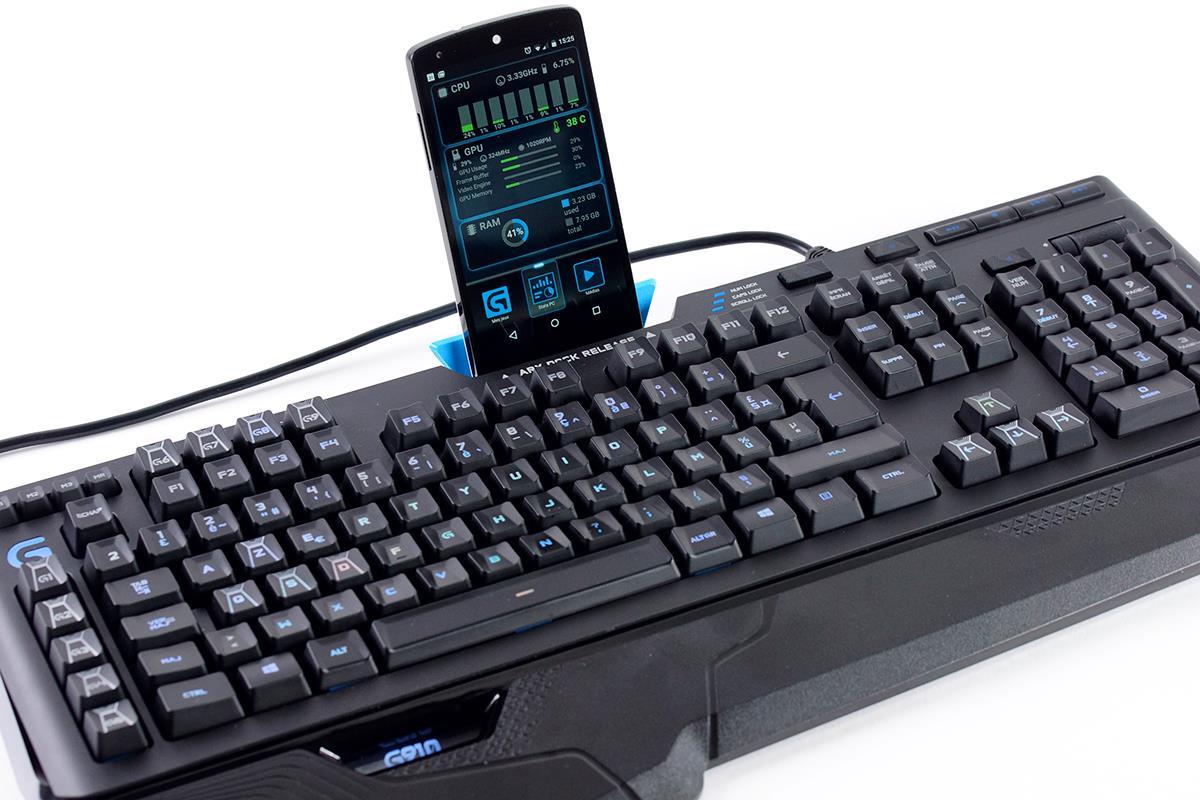 Logitech has had some really great keyboards over the years, and the one we have today is no exception. The Logitech G910 Orion Spark is built from the ground up for gamers. Logitech put in a great deal of work to make this one of the best keyboards I’ve used.

Let’s start with the basics. The G910 is a full-sized keyboard with mechanical keys and an impressive lighting system behind it. On the left side are five programmable G keys. If you've used Logitech gaming products in the past, G keys should be pretty familiar to you. Four more programmable G keys sit above the F1 through F4 keys at the top left. To the left of these G keys are profile selectors and a macro recording toggle button. If you have multiple setups and don’t want it to be game based, you can save profiles in the M1, M2, and M3 keys, and switch to them with the press of a button. The MR key is a nice quick macro record button that will let you set a key and record your actions without having to go into the setup program.

On the top right of the G910, there are the dedicated media keys so you can skip tracks, repeat, stop, pause, or play. Below the skip and repeat keys lies a volume dial, which I found myself using a lot more because it’s conveniently located and allows me to change the volume of my computer quickly and easily. 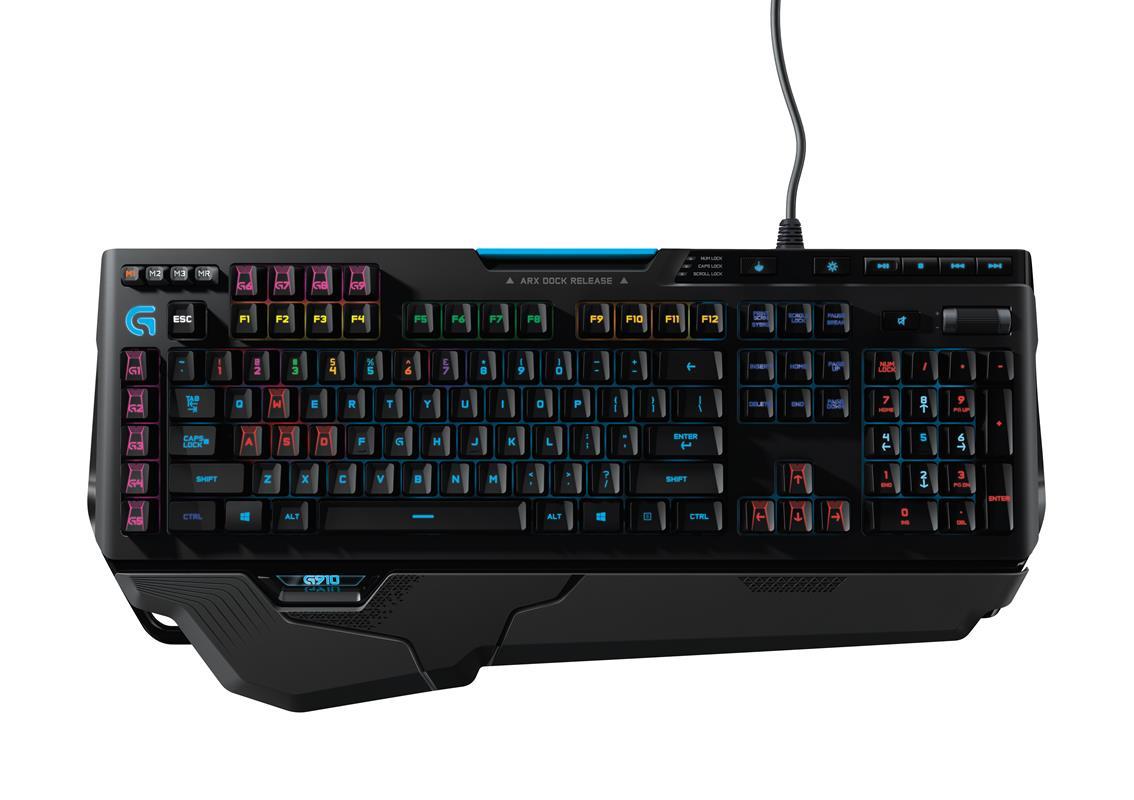 The keys themselves are actually shaped differently on top, depending on the location of the keyboard. The left side of the 6-Y-H-B line has three raised sides consisting of the top, left, and right sides of the cap. While to the right, the keys are raised on just the left and right side. The WASD keys are more deeply faceted than any other keys, just because they are the most popular for games, making it easier to find these keys without looking at the keyboard. There is a very non-uniform design; even keys such as the Windows key and left Control keys aren’t faceted. I don’t mind, but I do know some folks will, and this is where I hope Logitech decides to come out with key caps that are more uniform and ones that more people are used to. I know this keyboard is made for gamers, but gamers also do other things such as email, surf, and other general typing tasks. A more traditional cap would be a welcome addition to the G910, and seeing as the key caps aren’t compatible with anything else out on the market, choices are nonexistent.

Typing on the G910 Orion Spark feels good if you can get used to the caps. The mechanical keys, that are made by Japanese manufacturer Omrom, who specializes in medical and military equipment, feel snappy and don’t take that much to actuate. Seventy million keystrokes is what you can expect from each key. Forty-five grams of force is what you’ll need to press, and the actuation point is at 1.5mm of travel. The keys bounce back quick, and unlike some mechanical keyboards, it’s quiet. You don’t have to bottom out to type, and this makes for fast typing and gaming. While I know some people prefer the loud clicky sound of Cherry MX Blues, the keys on the G910 are like the Cherry MX Brown in both performance and sound. It takes a little bit to get used to, and, in the beginning, I was making a lot of typos in just my everyday usage of the keyboard. Some folks say they feel it’s a little smaller in spacing, and it does seem that way, but for me, I didn’t mind. After a bit of practice, I’m now able to type pretty well compared to my regular keyboard. But like I said, it takes some getting used to.

Each key is individually lit, and if you take off the caps, you can see the LED light pipe in the dead center of the keys—compared to some of the Cherry MX ones where the light is at the top of the key. The central location allows for a lot more even lighting and there is no light bleed. There are a great many ways to adjust the lighting effects so you can tweak it to your liking. I currently have it breathing different colors, and you can adjust the speed of the color change. The lighting looks great and really shines through on each key.

Some games are taking advantage of the lights to make games a little more immersive. For Grand Theft Auto V, once you get the police on your tail, the F keys will cycle red and blue like cop car lights. It’s pretty cool to see and gives the lights on the keyboard a little more use. Battlefield Hardline is another game that does something similar. Seeing companies take advantage of lighting on the keyboard themselves is great and I hope more games adopt this in the future.

Some of the old Logitech keyboards had LCD displays, which some games did take advantage of. Logitech went a different route with the G910. Rather than putting another display on the keyboard itself, there is a pull-out tray where you can sit a small tablet or phone. Installing a program on the mobile device, it will pull information from your computer and display it on the screen. It’s an interesting way to add a second screen without building one in. I’d love to see more games take advantage of it.

Logitech recommends a mobile device 7” and smaller to be used here. I used an old Samsung Note 2 I had laying around and it worked really well. There were times though it seemed that my phone lost connection with the service that provided the information, and a quick reload of the app fixed this. It didn’t happen often, but I did experience it a few times. I noticed, but it wasn't annoying. The app also force-closed itself a few times, which does add to the annoying factor. Sometimes it took a few times to restart the app before it would load again.

Currently there’s a tab to launch games, view your computer vitals, adjust other Logitech-installed products, control media, and change G keys. The only one I really used was the computer information showing me my RAM usage, CPU cores, and GPU stats. The game-launching tab allows for adjusting the list in either alphabetical order or last played. You can also hide games from the launcher. It’s not bad, but I would have liked to be able to re-order the list myself.

The one thing I did wish Logitech was able to include was a charging port for the dock. I’ve had a few times where the software would just drain the battery on my Note 2 quickly, so a charging option, I think, would have helped. Luckily, I was able to rig up a wireless charger and use that with my Note 2 to keep it powered while having the display on. Others might not be so lucky, but let's hope they consider this if they decide to include this feature on a future keyboard.

Logitech includes two wrist rests, but the are both the asymmetrical kind with more surface area on the left side than the right. I don’t know why Logitech didn’t include a large wrist rest for both hands, but I would’ve have preferred a normal one as well if I am going to be using this keyboard for multiple uses besides gaming.

You’ll only need a single USB connection, and there’s no USB or audio pass through on the G910. The USB cord is heavy, but not braided. I do like the simplification of connections, as I do have a few keyboards that need two USB ports free on the computer. And I understand Logitech going this route and removing some features to accommodate this. Still, with me being used to keyboards with USB and audio pass throughs, I do miss them on the G910.

At $179.99 at the time of this writing, the Logitech G910 Orion Spark keyboard will set you back a pretty penny. After using it for a few weeks, though, it’s been my go-to keyboard to play games with. I would still want to see cap replacements in order to give it a more traditional key feel, and I think that would go a long way into making this a great all-around keyboard. The keys feel great, and I think Logitech has a supply of keys that will give the other mechanical keyboards a run for their money. Lighting is really impressive as well. The Arx app needs some work in reliability and features. Logitech has a nice start, I think, to a great keyboard with the Omron switches, so I’m pretty excited to see what they do to take it to the next level. For now, the G910 Orion Spark is a solid effort that, and, with a few refinements, would become a tremendous keyboard.

For gamers, the Logitech G910 Orion Spark keyboard feels great. The keys are responsive and aren't loud, for mechanical keys. The decision to make the key caps different in areas is a little weird; it will take some time to get used to typing on it. Lighting effects are solid and the Arx dock is a pretty nice little feature.