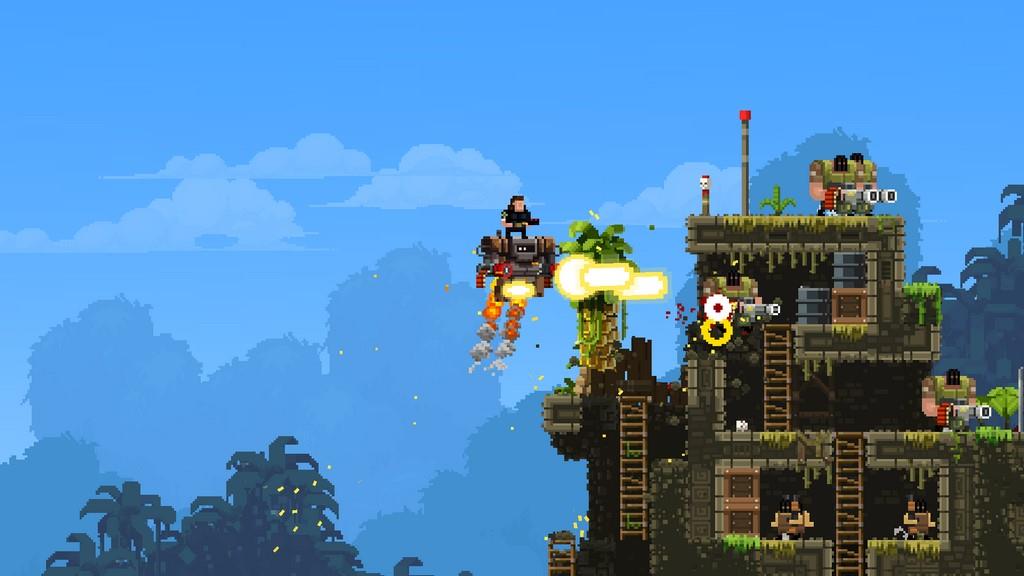 Last year I previewed Broforce, a side-scrolling shooter/platformer in the tradition of Metal Slug and Contra. Developed by South African studio Free Lives, Broforce began life on the game jam circuit before spending quite a bit of time in early access on Steam. When I played it last year I was hooked, and it’s become a favorite at Gaming Nexus staff parties. Editor in Chief Charles Husemann once described it at “10 pounds of fun in a 5 pound bag,” and I consider that a pretty apt description. For a few years now Broforce has existed as a killer early access demo with the promise of even more always around the corner; a gift that keeps on giving. But now that Broforce has finally been released, how does it stack up? Well, pretty much as I expected—the same awesome game but bigger, more polished and a hell of a lot meaner.

If you haven’t played Broforce in the past three years, it’s basically an homage to action cinema and the arcade shooters of the 8 and 16-bit eras; two genres in two mediums that basically grew up together and influenced each other so much they might as well be blood siblings. You play as the eponymous Broforce—an American mercenary team that stomps terrorism beneath a size 12 boot, no matter where it hides. Broforce travels all over the world to thinly veiled exotic locales such as Iranistan, Canadaland and Veetnam. Naturally these mysterious foreign lands are brimming with terrorists, and it’s up to Broforce to mete out some old fashioned democracy, by means of the business end of an M-16. The bald-faced jingoism would be a little uncomfortable if it wasn’t so on the nose, especially considering just who the bros are.

Every member of Broforce is a hilariously apt sendup of a famous action hero. The 80s staples are all present and accounted for: Rambro, Brobocop, Bro Hard, Brodell Walker Texas Ranger, among several others. However the roster also includes more modern and obscure heroes, notably The Brode (from Kill Bill), Brochete, Ellen Ripbro (Ripley from Aliens) and my personal favorite, Double-Bro-Seven. Naturally there are three versions of Arnie: Bronan the Barbarian, Bromando and the Brominator. 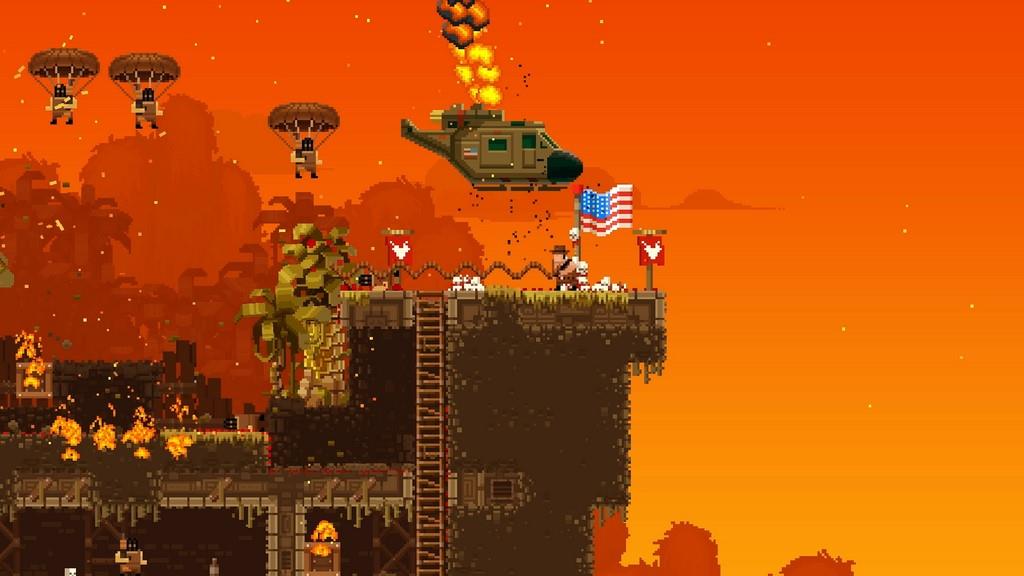 Broforce would merely be a serviceable novelty if its entire character roster consisted of palette-swapped homages to famous action stars. What makes this game stand out—and why it’s so addictive—is that each bro is unique. They all have their own signature weapons and special attacks and each one plays and handles just a little differently. While Broforce is primarily a shooter in the vein of Contra, there’s an entire subclass of melee-only characters like Bronan and Brade. Broguyver faithfully interprets his inspiring character’s aversion to firearms, and instead he lobs improvised explosives. His special attack is a delicious roast turkey stuffed with TNT, which lures terrorists to a gravy-splattered demise.

This character variety fosters a surprisingly deep level of strategy in a game that superficially looks like a mindless shooter. Every bro dies in one hit, so using melee characters is all about cautious hit-and-run tactics, while the bros who are armed to the teeth are more about dodging incoming fire while laying down a hail of lead. Of course, this was all true in the early access version. Free Lives would occasionally expand the roster, but the main campaign and enemy gallery was largely the same for a couple years. 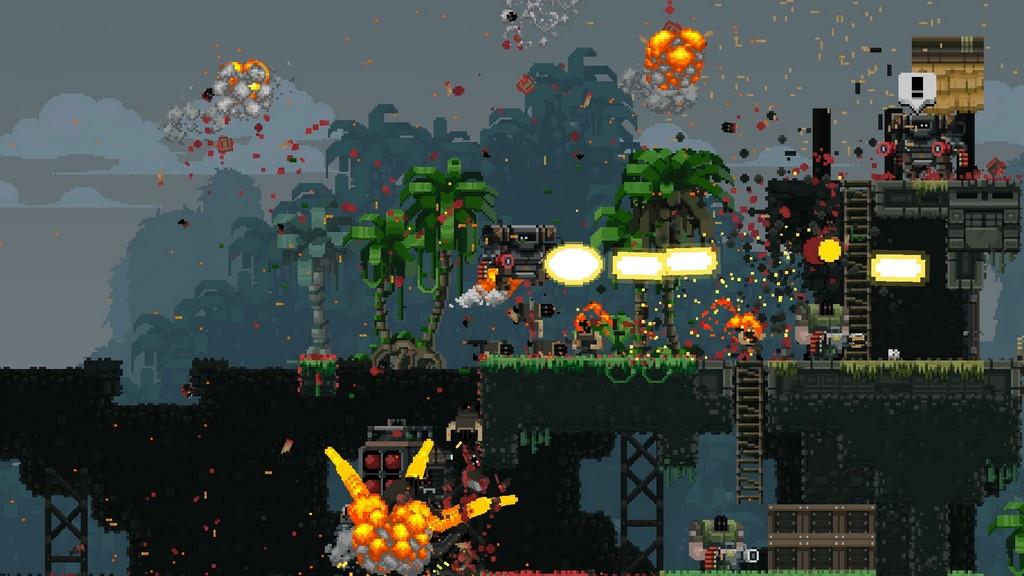 The final version of Broforce changes that dramatically. The campaign has doubled in length and what’s more, it’s not just about battling terrorist caricatures anymore. About halfway through the game you will start encountering the xenomorphs from the Alien movies; honest-to-god xenos and facehuggers with some biomechanical sandworms thrown in for good measure. It’s also about at this point that the game gets bloody difficult.

Broforce has always been challenging, but now it mirrors the controller-snapping difficulty of the classic games that inspired it. Once you start fighting the aliens, venturing deeper and deeper into their subterranean hive, the game ramps up the difficulty by sending wave upon wave of xenomorphs at you. It introduces exploding bugs that drench you in acid, crushing corridors and boss battles that make the earlier terrorist tanks and armored commandos look like third grade ballerinas. You’ll soon find yourself coveting extra lives like water in a desert; Broforce never reaches NES-era Battletoads or Ninja Gaiden levels of impossible but still, I was shocked by how quickly the game gets so unforgiving. While the keyboard controls are serviceable, I wouldn’t dream of trying to actually beat it that way. You’re best off plugging in a USB gamepad. 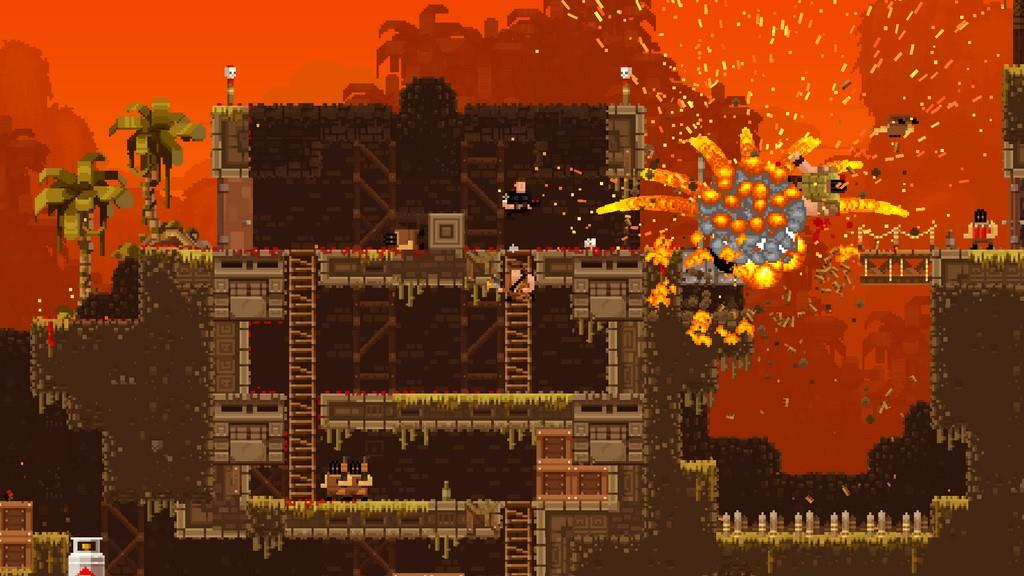 The final third of the game has you descending into hell to battle demons, zombies, necromancers and Satan himself. While the devil previously appeared in every Broforce level as an evil little horned dude in a sharp suit, he was more of an in-joke; the big bad at the top of the terrorist organizations in these scary foreign countries was the actual Prince of Evil. He wouldn’t even attack you—just stand there and laugh at you until you cut him down, only to disintegrate into a cloud of flies and show up again at the end of the next level.

Making hell the final leg of the game and Satan the final boss feels a little anticlimactic to be honest. He’s not a joke anymore about perceived evil. But then again if you look at Broforce strictly as a parody of action movies, and not some hipster art piece pushing a pretentious message, you can’t have anyone else as the big bad. Broforce’s campaign has had a long time to gestate and evolve—I’ve played through just about every update and version since the game first went up on Steam—but the final product is suitably satisfying. It’s a bit too tough in spots and at times unfair, especially when it gives you the wrong bro for certain circumstances, but overall it’s a crazy good time. 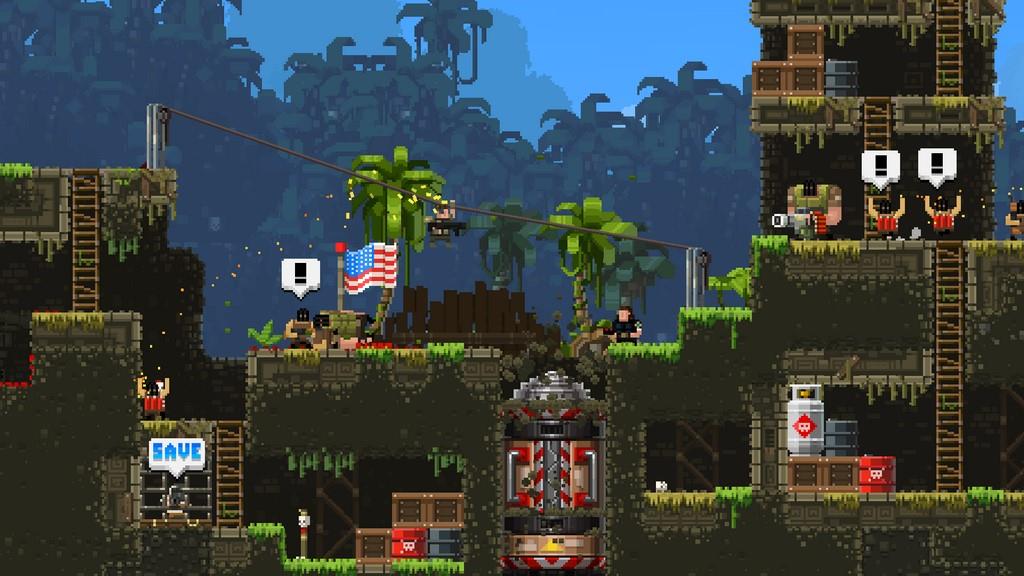 Throwing the action into multiplayer sounds like it would be even better, right? Well…to a point. If you don’t care about winning or losing, drunken Broforce on Steam Big Picture during a house party is sure to elicit raucous laughter from everyone in attendance. However if you would actually like to progress through the campaign with up to three friends, then they better be skilled, patient and capable friends who work well on a team.

Like Super Mario 3D World before it, Broforce is a game that can make or break friendships and other personal relationships. The game’s uncompromising difficulty makes it easy to turn even early levels into extra-life-devouring meatgrinders. Without the utmost care and teamwork, Broforce’s completely destructible environments and profuse quantities of loose explosives can set off chain reactions that would make Michael Bay weep tears of joy. A stray grenade or bullet can also turn an entire 4-person team into chunky salsa in mere seconds. Broforce inhabits a dangerous, volatile world; you need to know your team well to succeed. 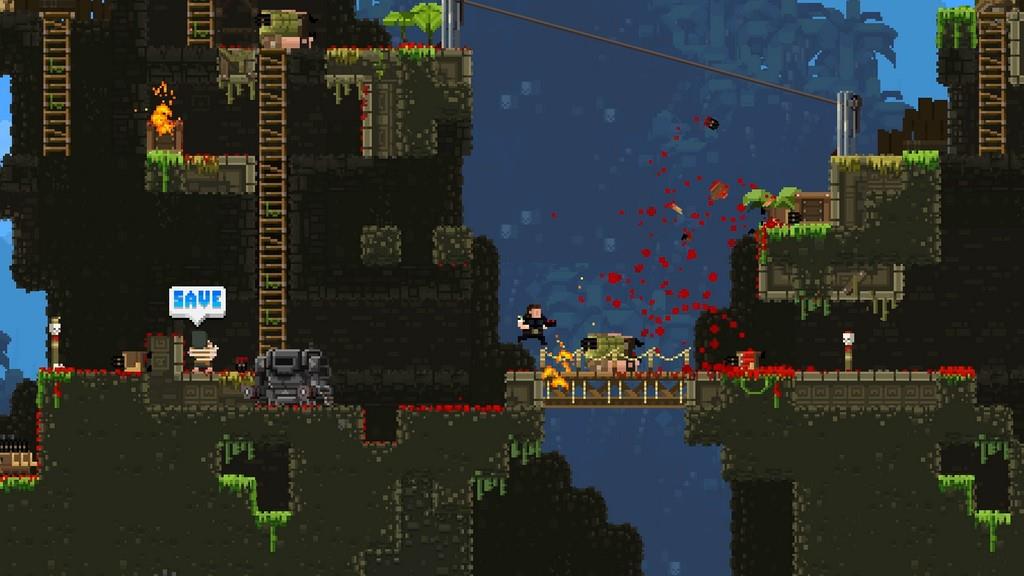 While Broforce’s art style and general production values are largely unchanged from early access—this is a very good thing, by the way—there have of course been some additions and improvements. The visual design is still a mixture of adorable chibi action heroes and copious pixelated carnage, superimposed on a background of misty 16-bit jungles, deserts, third world countries and eventually alien hives and the pits of hell. Every character, vehicle and boss is both rugged and oddly cute; imagine if Rambo bought Fischer Price or Playmobil toys for his kids and you’ll get the idea.

The final version has added some more cinematic flourishes. Each new character unlock and boss introduction is accompanied by a dramatic splash screen done in a more stylized form than the rest of the game; thankfully the little character portraits remain the same. There are even a few smarmy cutscenes—one portrays the life flashback of a suicide bomber as he is born, graduates school, gets married and has his own children, wearing a bomb vest the entire time, before being unceremoniously blasted to bits by Broforce. This game’s humor is refreshingly blunt but also nonsensical, which lets it play with some disturbing subject matter but allows you to laugh at it the entire time.

Broforce is a culmination of its various parts. With so much fan feedback and early access testing to draw from, Free Lives has had the chance to polish the game’s rough edges down and essentially double the content. The game is somewhat unreasonably difficult and I did encounter some technical glitches—the game had a tendency to lock up between levels sometimes—but all in all Broforce is the rare case of an early access game that makes the most of its gestation. It’s brutal and gratuitous but also deep and laugh-out-loud funny. If you have what it takes, don’t pass this one up.

Broforce finally explodes into its final release. The old-school difficulty might shock more casual indie players, but the pitch-black absurdist humor and deep, dynamic gameplay will keep you coming back for more.