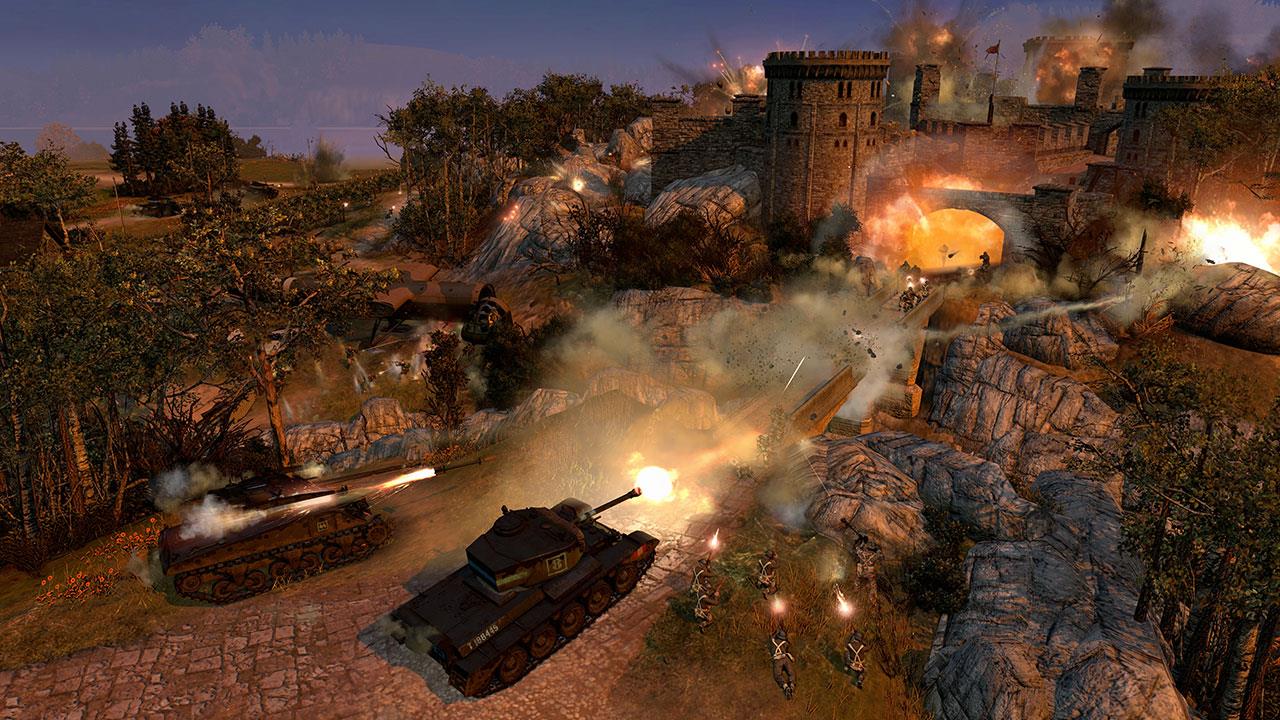 Company of Heroes 2: The British Forces

Written by Travis Huinker on 8/24/2015 for PC
More On: Company of Heroes 2: The British Forces

Following last year's release of the single-player expansion Ardennes Assault, developer Relic Entertainment expands Company of Heroes 2 again with the standalone multiplayer expansion of The British Forces. The focus of the new Company of Heroes 2 expansion as its name implies is the introduction of units from the British army forces. One of the major differences between other Company of Heroes 2 armies is that players can decide between two approaches to their British forces. As players progress through the British tech tree they're given a choice of selecting the defensive-based structure 'anvil' approach or alternatively going with the 'hammer' approach that focuses on mobile and powerful units. The expansion's content includes a total of 15 units, six commanders with unique abilities, and eight multiplayer maps that range from a German steelworks factory to the city of Düsseldorf. Overall, the amount of content strikes a nice balance of variety for both series newcomers and veterans looking for new additions to their existing game.

The units comprising the British forces might be some of the most varied and unique seen in a Company of Heroes game. Beginning with the early tech tree units all the ways to the more advanced, such as the Churchill Crocodile tank with a giant flamethrower gun, make for continual changing gameplay situations throughout matches. The ability later in matches of being able to focus on a range of defense structures or a more attack-based army of tanks make replaying maps a new experience every time. The defensive structures in particular are great for use in protecting capture points and vital strategic locations such as bridges and main supply roads. Primary defensive emplacements include the 3-inch mortar, 6-pounder anti-tank gun, and 40mm anti-aircraft weapon. Aside from the royal engineer crews being able to build the mortar and gun emplacements, the basic infantry units can also build quick defensive structures including trenches and saddlebags for unit cover.

Players looking for a more mobile approach to combat are also in luck as the British forces also have a quick moving vehicle with the universal carrier vehicle that combined with an infantry squad is perfect for quickly capturing points. In the form of raw fire power, the British have a powerful selection of tanks to pick from including the Valentine Mk. XI, Cromwell MK. IV Cruiser, Sherman Firefly, Comet, Churchill Mk. VII Infantry, Churchill Crocodile, and Churchill AVRE. The tank types are varied enough to allow for players to select the perfect set of them for each combat encounter, be it a faster movement speed or more armor and firepower to face off against German armor. In regards to infantry units, the British forces have access to their premier Commando squads that favor stealth and bomb planting for their battlefield incursions. Other infantry units include the Vickers heavy machine gun team and .55 cal armor-piercing sniper, which is particularly useful for challenging light enemy vehicles on the battlefield.

When playing as the British forces it was notable that the developers have incorporated a diverse cultural makeup in the units. The developers actually hired voice actors from the distinct cultures to represent both the proper accents and if they would have come from the working or upper classes in the United Kingdom. British units such as the sniper is a Scotsman while the commando is a Northern Irishman. The Company of Heroes series has always been known for its focus on World War II authenticity and the latest expansion is no difference. Between clicking on various units and hearing their authentic voice acting in combat adds a heightened sense of atmosphere to the hectic battlefields. 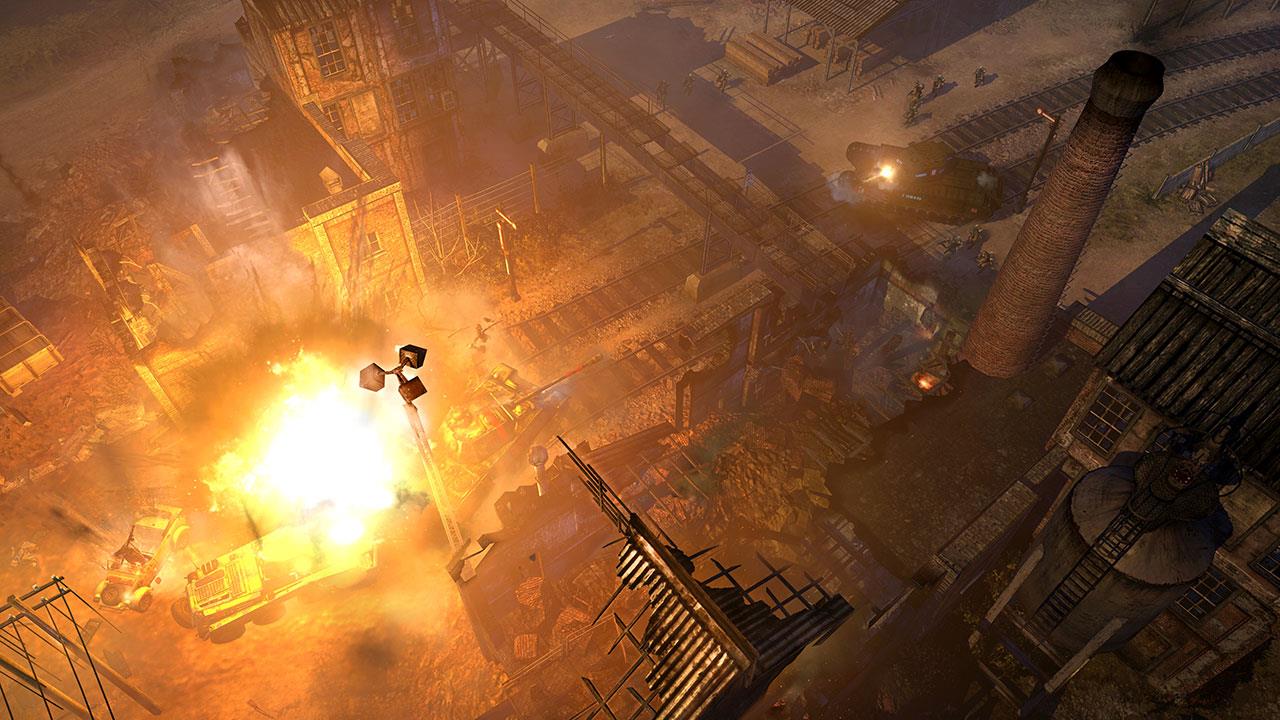 The British commanders added with the expansion are varied in their approaches to combat, which is good news for players trying to find the one that matches their gameplay style. The commander selection includes the following regiments: Commando, Royal Engineer, Royal Artillery, Vanguard Operations, Tactical Support, and Special Weapons. Abilities are diverse in what they can accomplish depending on the situation, some making pushes into the battlefield easier while others allow for the spawn of special units. The artillery focused abilities offer the same visual spectacles of destruction as in past Company of Heroes games. Players should know that not all of the commanders are unlocked in the beginning with some of the more advanced required to be won from victory chests.

While the new units and commandos are the main focus of the British forces, the eight additional maps shouldn't be ignored as they're some of the best designed environments yet in a Company of Heroes game. The map Heidelberg Crossings in particular is one of the more thrilling with a river that separates each side of the map. Two primary bridges offer the only roads for which vehicles to pass over and ultimately end up creating fierce battles over the control of them. Map sizes range from small two player environments all the ways up to eight player battlefields.

While the expansion content is focused on the game's multiplayer component, players should know that all of the units, commanders, and maps can be used in skirmish matches against AI armies as well. At the selling price of $12.99, the expansion is a great deal for both series newcomers and veterans. As a standalone game, it provides a nice introduction to Company of Heroes 2 gameplay and even full access to its multiplayer community and user-created maps. For series veterans, the British units and commanders are solid additions to the line-up of previous armies. The only drawback is the lack of any single-player missions considering the British army focused content. With such a diverse and compelling World War II history from the British perspective it would have been interesting to play a single-player campaign similar to the content on display in Ardennes Assault.

Company of Heroes 2: The British Forces is an excellent multiplayer expansion pack for veteran players, while it's also a great entry point for newcomers with its standalone design. The addition of British units and commanders offer one of the more diverse and entertaining armies to play as in the Company of Heroes 2 series. As well, the new maps provide compelling environments for fierce combat encounters. While it's disappointing that there isn't any single-player content included, The British Forces is still strongly recommended for both series veterans and newcomers.