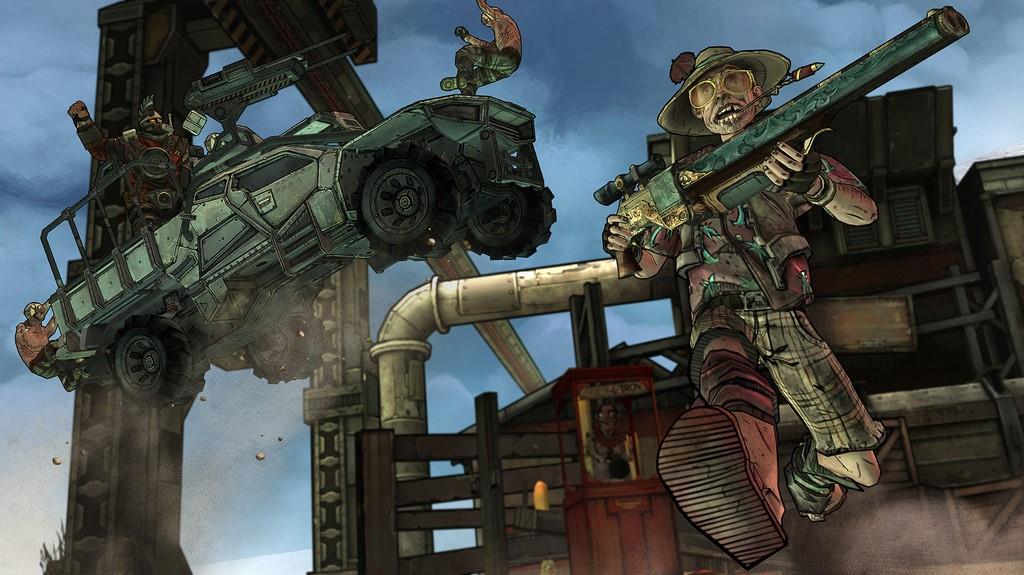 Tales from the Borderlands: Zero Sum

Written by Jeff Kintner on 12/4/2014 for PC
More On: Tales from the Borderlands

The first episode of Telltale's venture into the world of Pandora, Tales from the Borderlands is finally here, and it's everything we wanted it to be. It's like playing a heist movie set in the Borderlands universe we've come to know and love, with all the backstory and crude humor intact. "Zer0 Sum" clocks in at about two and a half hours, a bit longer than Telltale's episodes normally run, but it also has more backgroud to set up, what with you playing two characters and all.

Telltale stays true to the Borderlands style in Tales.  This shouldn't come as much of a surprise since Telltale has a strong background in cell shading, but they really go above and beyond with the menu and HUD design. Borderlands has always done an amazing job of blending Sci Fi and Western themes, and the tradition continues with the two protagonists, Rhys and Fiona. Rhys is a Hyperion suit looking to become the next Handsome Jack- he says as much in his introduction. Rhys has a cybernetic arm and an artificial eye that can be used to scan the environment for clues. His menu layout consists of blue holographic screens, and have a distinctly futuristic feel to them. On the opposite side of the coin, we have Fiona- a Pandoran native and wanted con artist that's looking for her next big score. Her menus are steeped in faded sepia tones and designs that bring a certain Joss Whedon Space-Western to mind.

But Borderlands' aesthetic isn't what made it a high-profile franchise. It's all about the head-'sploding action and it's distinct brand of brilliantly sophomoric humor.  Tales absolutely nails all of its punchlines, not only throwing out jokes that fit in with the normal Borderlands faire, but the entire episode sort of feels like a loving send-up of the series. From their take on the Borderlands musical intro, to the fact that everyone on Pandora seems to be a gun-toting psychopath. True to Borderlands' style, the characters are greedy, loveable jackasses; and true to Telltale's style, your responses shape the narrative and how NPCs regard your protagonists. Judging from the dialogue options in Zer0 Sum, Rhys and Fiona are going to be spending a lot of time struggling between their innate greed and the well being of their closest friends. They aren't vault hunters that run around shooting up bandits and Skagzillas for reward money and shiny new guns, they're just a couple of charlatans who've clearly bitten off more than they can chew.

The episode starts out with Rhys and Fiona getting caught in a tight spot, with their captor forcing them to tell their story. So the narrative is a collaboration between two unreliable narrators who are constantly interrupting each other to tell their side of the story. Rhys speaks up first, explaining the state of the Hyperion corporation in its post-Handsome Jack condition. The company is comprised entirely of self-serving jerks that climb all over each other to get to the top, and after Jack's death there's a jerk-shaped power vacuum and everyone's looking to get theirs. Rhys happens to land on the business end of one such power struggle, and he's trying to get back on the right side by pulling the rug out from under his rival's feet. One thing leads to another, and he makes his way to Pandora with ten million dollars of Hyperion cash. Fiona is a fast-talking con artist that's part of a crack team of hucksters with her little sister Sasha, and their mentor, an old tinkerer named Felix. They've got a big scam set up with the intent of fleecing some serious cash out of some Hyperion warmongers. You can guess what happens next. By the end of the episode there's been enough crazy schemes and double-crosses to fill any heist movie, and it's just the beginning of the story. The episode ends on this great moment of triumph for the characters that's accented with this uncertain dread of how it's going to go wrong and end up at the place it started. I can't wait to see how bad it gets for these guys, and it's going to be fun watching them try to talk their way out of it. 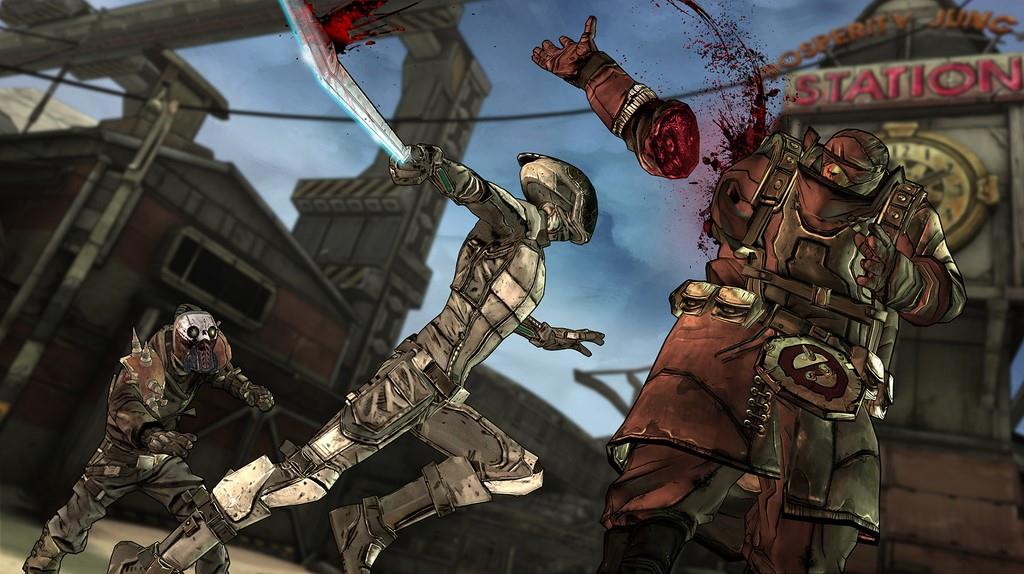 So far, Tales from the Borderlands is a lot more action-focused than Telltale's previous titles, the majority of "Zer0 Sum" happens over timed dialogue choices and quicktime events. The dialogue is witty and entertaining, and the quicktime events make for extremely cinematic and fun to watch action sequences, but they're not particularly difficult. If you're paying attention, it's easy to make it through the entirety of the episode without dying, although I'll say it's worth missing a couple events and dying at least once. Just trust me on that one. The point-and-click exploration scenes are few and far between, which made me a bit sad because I loved the new ECHO eye ability Rhys has. It shows everything through Rhys' artificial eye and gives information on key objects that no one else can see. Honestly, it's mostly used for side-jokes, but it was some of my favorite writing in the episode. I'm excited to see what else they do with it in the future.

The icing on the Borderlands cake is definitely the voice acting- everyone involved does a fantastic job. Laura Bailey does a phenomenal job as Fiona, pairing dry sarcasm with a cocksure attitude without going overboard, giving us a delightfully charming character. Everything that Troy Baker does turns to gold, so as Rhys he continues to show us why he's so hot on the voiceover circuit right now. Chris Hardwick does a great job as Rhys' panicky friend Vaughn- he actually reminds me a lot of Chris Parnell as Cyril Figgis in Archer. Erin Yvette (who voiced Snow White in The Wolf Among Us) voices Fiona's little sister Sasha, and does a really good job of portraying a character with similar characteristics, but with enough of a different personality to separate herself from her sister. And Patrick Warburton is one of the few people that can use his normal voice in everything he does and I'll always love it.

As far as introductions go, Zer0 Sum gives us a hell of a welcome to Tales from the Borderlands. The aesthetics and writing are true to the source material, the humor is on point, the characters and voice acting are great, and the story is entertaining and engaging. Since they're turning a traditionally FPS series into a point-and-click adventure, it heavily relies on quicktime events and action sequences, but it does a good job of mixing objectives and pacing to keep it from getting stale. "Zer0 Sum" sets up a lot of exciting possibilities and daunting mysteries into motion, and I can't wait to see where it goes from here.