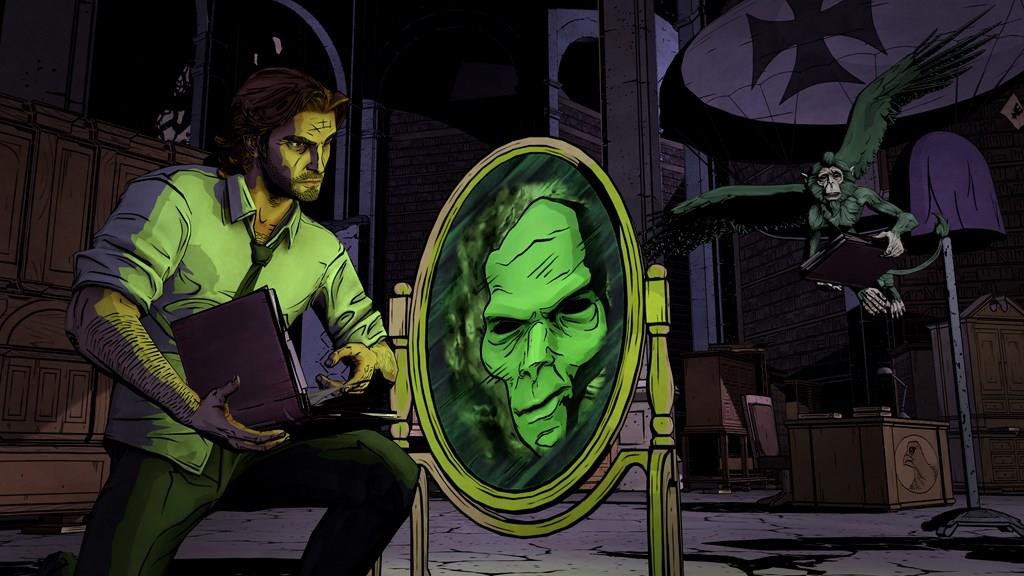 The Wolf Among Us

Right off the bat, I'm going to say that if you liked Telltale's The Walking Dead, you'll love The Wolf Among Us. Even if you didn't know that Telltale was marketing Wolf Among Us as 'Fables getting The Walking Dead treatment', it's pretty obvious that both games come from the same stock. They feature the same control scheme and gameplay elements like timed dialogue and decisions that effect the course of the game. The games let you know that you've done something important by informing you that 'Snow White appreciates your concern' or 'Mr. Toad will remember what you said.' The closest thing I have to criticism for The Wolf Among Us is how it's almost identical to The Walking Dead. But considering how many Game of the Year awards it won, that's like criticizing The Dark Knight for having too much of the Joker in it.

If you aren't already familiar with Bill Willingham's "Fables" or Telltale's games, here's a brief rundown of The Wolf Among Us: All of the fairy tales have been forced out of their homelands and have been living in a secret community in New York for centuries, where they're forced to keep their magical identities a secret from the mundane world. For some fables, like Mr. Toad of Wind in the Willows fame, this means buying expensive glamour spells to appear human in public. You are the sheriff of Fabletown, Bigby Wolf, A.K.A the Big Bad Wolf. Your job is to make sure everyone obeys Fabletown law and doesn't attract any attention from the mundies. But of course, there's been a murder most foul and you'll need to figure out what exactly is going down in Fabletown. Keep in mind, this is not for children. Fables is a gritty retelling of classic tales that's rife with sex, violence, and just about every other adult theme you can think of. And lots of swearing. 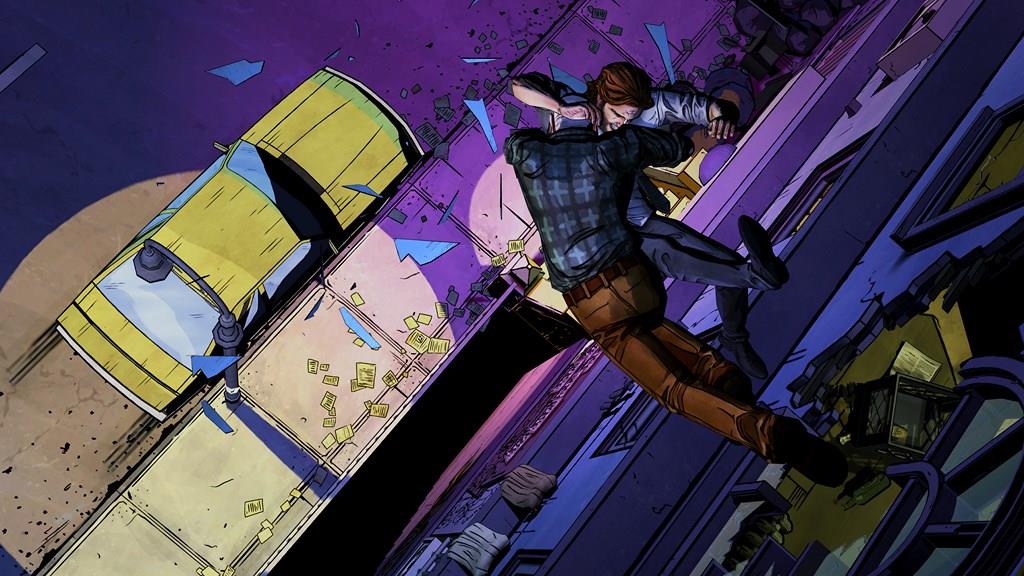 The Wolf Among Us is a highly cinematic point-and-click adventure that consists mostly of interactive cutscenes. When you interrogate people, you have a limited time to choose between 3 dialogue options; if you let the time run out, you stay silent and let the other character continue talking. How you go about examining crime scenes and how you treat other characters effects how the story plays out. If you threaten a character, they will remember it and treat you differently next time they see you. Sort of like a choose-your-own-adventure book.

Even if you use a controller, your interface is a cursor that moves around the screen and lets you interact with people and objects, examine clues, and fight. Like everything else, the combat is cinematic. Tap a certain button or click an object in time and watch the cutscene, or get your face knocked in. For the most part, the game ran smoothly for me. I ran into some lag during a couple scenes, but that was the worst of it.

At first glance, the graphics for The Walking Dead and Wolf Among Us are almost identical, but this is actually where the two games start to differentiate themselves. Telltale's The Walking Dead seems to have drawn more inspiration from the show than the comic. The slightly softer shading and muted tones make it the more 'realistic' looking of the two; while The Wolf Among Us has much heavier cel shading and highly saturated colors that make it look like a hand-drawn comic. This isn't to say that the graphics are anything short of amazing- they really capture the gritty comic book atmosphere without being overly cartoony- it looks like a living, breathing comic book. Speaking as someone who normally hates motion comics, Telltale has set a new standard for comic book adaptations. 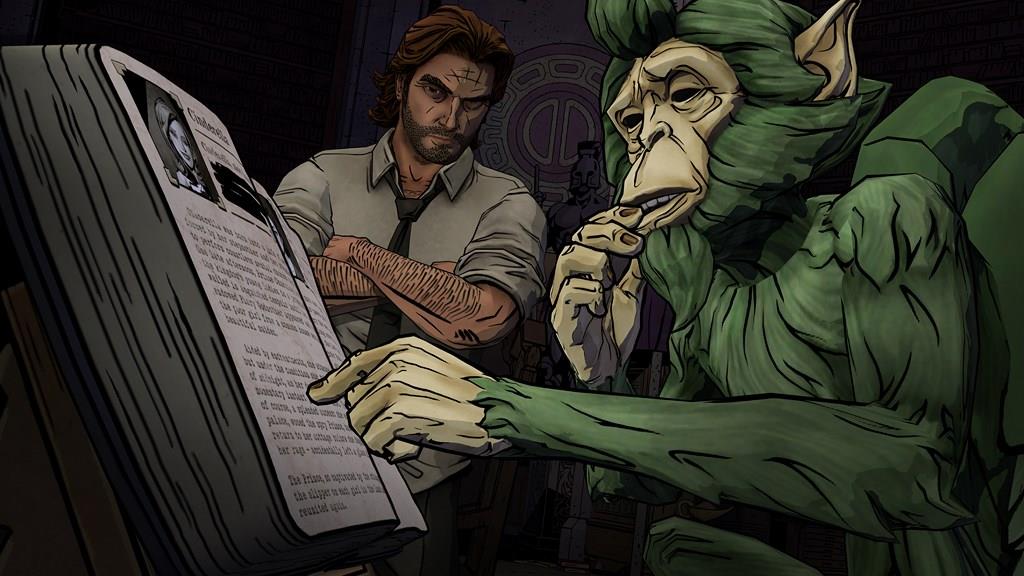 If you're not a big reader, you won't need you to run out and read every issue of Fables you can get your hands on before playing Wolf Among Us- they make it as user friendly as possible (but seriously, you should be reading this series. It's won fourteen Eisner Awards!). For the uninitiated, Telltale has included the Book of Fables- every time you come across a new character or concept, an entry is added in the Book of Fables that fills you in on their backstory in the Fables universe. Although, only 8 of the 21 entries so far are reoccurring characters, so most of the magical misanthropes in 'Faith' are completely new to the series. Wolf Among Us has Bill Willingham's seal of approval on it to be part of the Fable's Universe. So if you're already an avid reader, there you go.

For all the Fables fans, there's obviously a lot of familiar territory here. 'Faith' is similar to the very first Fables arc where Bigby Wolf and Snow White solve Rose Red's murder- a great hard-boiled detective story where they piece together clues and interrogate fantastic characters in order to get to the bottom of a grisly mystery. Keep in mind that The Wolf Among Us takes place twenty years before the first Fables story, so all of our key players are a little rough around the edges. Snow White is only Ichabod Crane's assistant, and she isn't sure if she's cut out to be a public servant. Depending on the choices you make as Bigby, you can be gruff-but-well-meaning, or you can smash and intimidate your way through your leads, not caring where the collateral damage leads you.

As I always do with multiple choice games, I had to do two run-throughs where I take opposing paths. Faith only takes about two hours to run through, but once you take your first bite into the story, you're hooked. Episodes of The Wolf Among Us end with a 'to be continued' trailer just like The Walking Dead, and I can already see how both of my save files are playing out differently- it was like I was watching two completely different trailers. Telltale has perfected their episodic formula.

If you're only buying the first episode, it doesn't take much of a commitment to dip your toes into The Wolf Among Us- just know that there's a massive cliffhanger that might prod you into buying the whole series. So you might as well save yourself the money and buy the whole thing now.

There's a lot in The Wolf Among Us for Fables fans to get excited about. And if you're new to the series, it's just as good an introduction as reading the first tradeback. I enjoyed 'Faith' so much that I did two run-throughs in one sitting, and I can't wait to see where my decisions lead in the next episode.