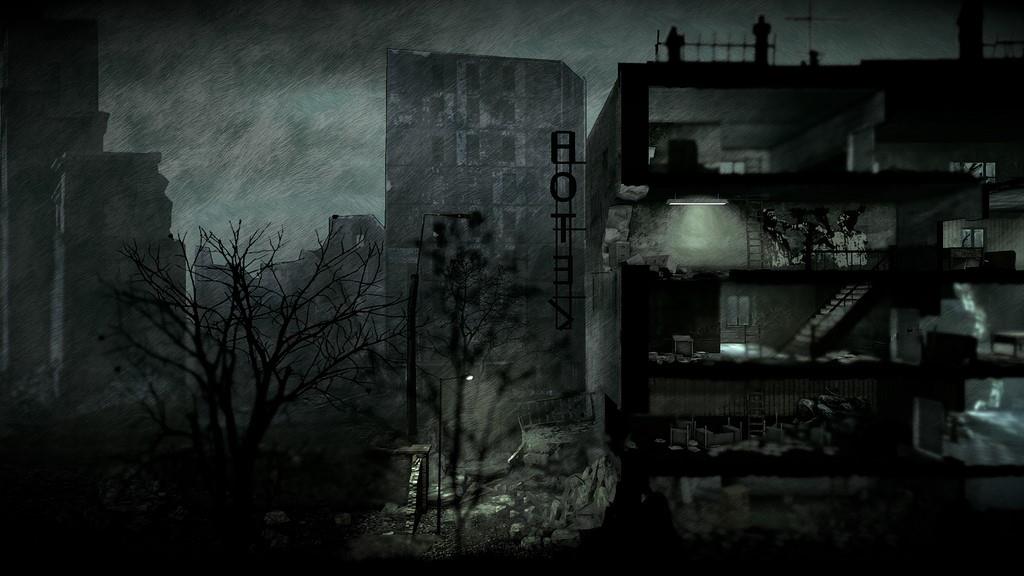 This War of Mine

If you're familiar with 11 Bit Studios, you know that they're the people behind Anomaly: Warzone Earth- a tower offense game where you fend off an alien invasion through the usual means. Guns, soldiers, explosions- a military strategy that seems to say "if we blow enough of 'em up, they'll leave us alone eventually". But their most recent game takes a step away from the front lines of an intergalactic war in favor for the decrepit home front of a completely fictional, yet all too real civil war. Or is it an insurgency? Conflict? Rebellion? Whatever it is news networks feel they need to call it.

In This War of Mine, you play as a group of civilian survivors in the fictional eastern-European-sounding country of Pogoren. The details of the war are vague at best, but they don't matter. You're just another group of civilians caught up in a war that has nothing to do with you, but has completely destroyed your lives, and threatens to do worse. You will have to scrounge to survive- digging through refuse in order to build something resembling infrastructure. The first time I fired up this game, it brought to my mind a quote that I can't remember the exact wording, nor where I found it. But the sentiment was something like this: Modern America is obsessed with apocalypse fiction because it forces all of us that live in the first world to think about the horrors of living like the rest of the world. And that's just what Pogoren is- a modern metropolitan area that's been completely stripped of its first world status.

As far as genres go, I would call This War of Mine a slow-paced strategy/survival game. The interface is a bit like The Sims- in that you direct a group of people's day to day lives by sending them to various appliances and commanding them to interact with it. It's also a bit like Gods Will Be Watching in that one of your biggest challenges, aside from resource conservation, is the action economy. Your days and nights follow a strict time limit, and if you don't finish what you're doing by the time the sun rises or sets- too bad. During the day, the fighting in the streets keeps your group confined to the abandoned building you've decided to hole up in. Your building is large enough to accommodate  multiple people, and eventually set up a decent living situation for yourselves. You can build furniture, gardens, rain barrels, distilleries, traps- anything to provide your survivors with vital supplies and creature comforts to keep them alive and sane. But all of these things require raw materials to build, and only at night is the city safe enough for you to leave the homestead and scavenge for goods.

Once the sun goes down, you choose one person to go out and scavenge, while the rest stay back to sleep or guard the shelter. If you don't set a guard, it's likely that you'll be raided in the middle of the night. If no one sleeps, everyone will be too exhausted to do any work the next day. If no one goes out to scavenge, you'll quickly find yourself running out of resources. Obviously, going out and digging through blown-out buildings is no picnic. There are few completely abandoned locations that are safe to scavenge, but in most buildings you'll encounter some kind of inhabitants. Whether it's an elderly couple that just wants to be left alone, a starving hobo asking for scraps, a fellow scavenger looking to trade, or another group of survivors looking to protect what's theirs. You'll not only face mortal dangers in Pogoren,(more often than not, my survivors met their demise at the barrel of a gun), it's inevitable that at some point you'll have to decide if taking care of your own is worth taking from others. 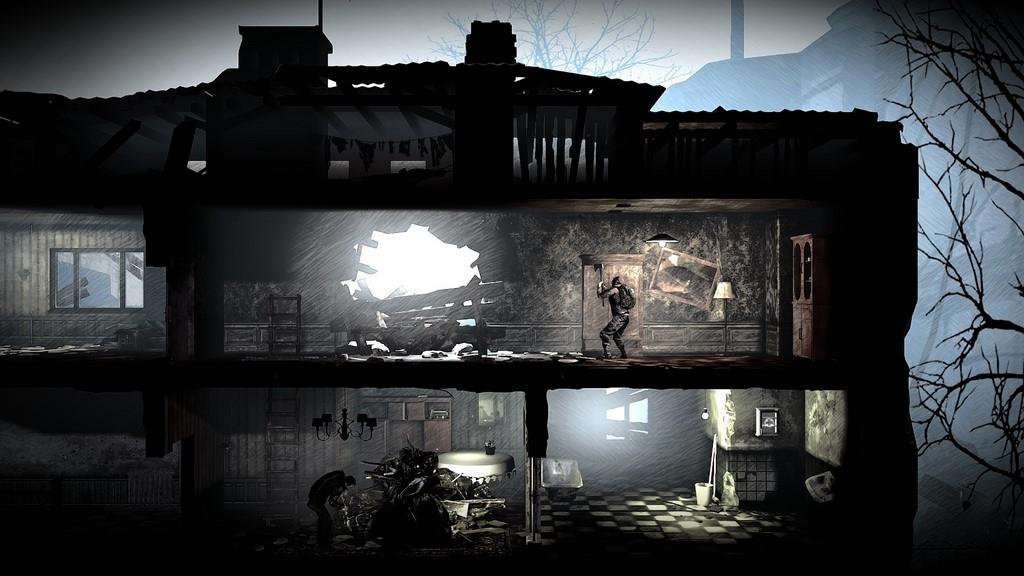 Pop quiz, hot shot: Your friend Bruno is sick, and your scavenger Pavle is about to succumb to his wounds. You're out of medicine and bandages, and you don't have anything to trade for them. Do you risk taking injuries of your own trying to break into the heavily guarded school that Pavel was run out of? Or do you do the take risk out of the equation entirely and sneak over to the suburbs to rob a defenseless elderly couple?

After you've made your decision, you get yourself geared up for the excursion when suddenly you hear someone knocking upstairs.  "Please, help us!" Your neighbor screams from the other side of the particle board you call your front door. His brother has been shot by a sniper and he needs help moving him to safety. He's been turned away at every other house, and if he doesn't move his brother soon, he will die. Do you turn him away so you can take care of your own, or do you put off searching for medical supplies to help your neighbor?

These are the kinds of decisions you can face any day in This War of Mine, and it's implemented brilliantly. There is no central storyline; the moral dilemmas aren't played out in cutscenes, they just happen. If you slip up scavenging with Pavle and still make it home alive, now you have to deal with the fact that he's on the brink of death and desperately needs expensive medical supplies. There's plenty of locations to choose from when scavenging for supplies, each one with its own dangers and setbacks to deal with. Stealing from armed survivors has it's obvious perils, but doing amoral things like stealing from the elderly, or turning away neighbors in need will cause your survivor's morale to sink. "Is this really what we've come to?" they wonder as they tend to their wounds "is there nothing else we could have done?" Your survivors can die from their sickness going untreated, or starve to death from not eating for days on end, and if they get hurt, their wounds can become severe enough that they bleed out. In the same way, if they witness enough tragedy or act amoral enough, they become depressed to the point where their spirit is utterly broken. They stop moving entirely, and won't perform any actions. The next morning when everyone else wakes up, or comes back from scavenging, they'll find their friend dead by their own hand. And now the remaining survivors will have to deal with that on top of everything else. 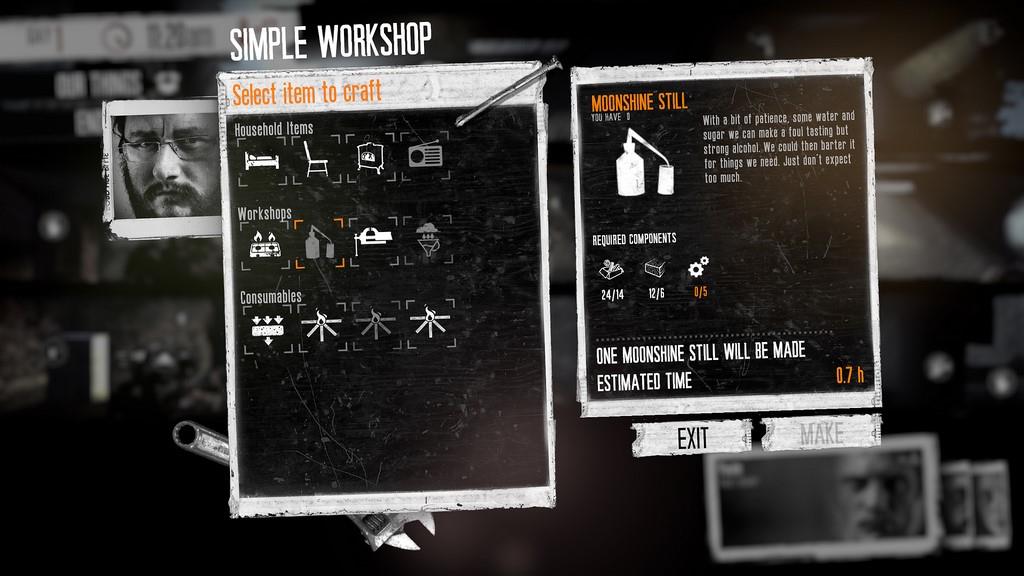 I love the way This War of Mine is built from head to toe with a depressing mood, but to be honest there are times where gets a bit melodramatic. Especially if you have a really bad run where you need to steal to survive, but get killed anyway. The game always ends by rolling through all of the moral decisions you made, and how your survivors met their fate. Then again, if I didn't want to see my poor decisions played out in front of me, maybe I shouldn't make them in the first place. If 11 Bit ever does any major updates, one improvement I'd like to see implemented is some keyboard hotkeys to compliment the point-and-click interface. The only keys you can use are the spacebar to pause and the Escape key to go to the menu. I found myself wishing that I could use WASD to pan the camera, or to quickly navigate my inventory, instead of swinging the mouse around all the time. I'd also like to be able to use Q and E to cycle through my survivors instead of having to click on their profile at the bottom of the screen every time I wanted to change characters. As they are, the controls don't really take away from the game at all, I just found myself wishing for some hotkeys to make everything feel a bit smoother.

I wouldn't call this game a rogue-like, but it does have random elements to it. There are ten possible survivors for you to play as, and you'll start out with three random ones every time. Although it should be noted that I started and restarted several games to see what kind of characters there were, and the generator seemed to heavily favor the two I mentioned earlier in this review- Bruno and Pavle. Although the locations you can scavenge at are static, the ones you can access are random- many of will be cut off by the ongoing fighting, and you'll have to wait for another night to go there. Also, events like neighbors showing up to your door to offer and ask for help are randomly placed throughout your playthrough. It doesn't make a big enough difference for me to say that this game is infinitely replayable, but it certainly keeps you uncertain and always a little off-kilter as you play. Even as you set up your shelter, you'll constantly find yourself struggling to keep your survivors comfortable- and that is exactly what This War of Mine is looking to do to you.

Where a lot of developers go for big, heady stories to wow their audience, 11 Bit took a different direction with this game. From the drab, almost grayscale color palette, to the sketchy backgrounds, to the ominous soundtrack that seems to swell and go hollow at the same time; This War of Mine concentrates on setting a pervasive and unsettling mood that will stay with you long after you turn off your computer. As you try to survive against the countless hardships in this nameless, faceless war again and again in your multiple playthroughs, it begins to take its toll on you. Even as you learn the mechanics and rules of this world, you still feel it's weight on your shoulders when you play it. Every time I put it down, I think to myself in Ron Perlman's voice: "War... War never changes." This War of Mine is a depressing masterpiece of mood that absolutely nails the concept of tone and mechanics reinforcing the setting of a game.

This War of Mine delivers a setting that is depressing and unsettling. It's a slow-paced resource management strategy game that will hang over you long after you walk away from it. Admittedly, it tip-toes into being melodramatic at times, and the controls could benefit from some hotkeys to back up the point-and-click interface. But the mechanics and setting are so well done, it's an absolute must play for anyone looking for an example of how all the different parts of a game can come together to create an affecting and immersive experience for a player.