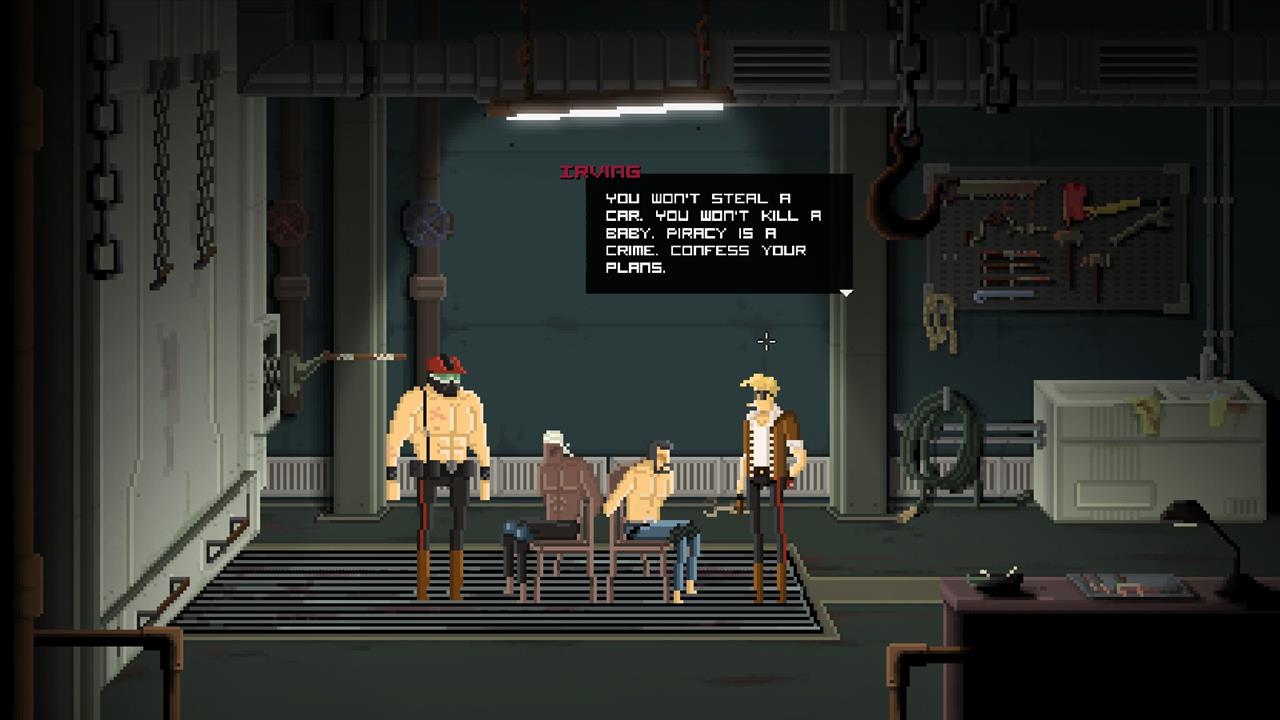 Gods Will Be Watching

Gods Will Be Watching, like most indie games these days, came about because of an immensely successful crowdfunding campaign. Deconstructeam- a small studio based out of Valencia, Spain- managed to raise €20,385 (a little over $27,600) over the course of their Indiegogo campaign. Additionally, the game is being supported and published by Devolver Digital. So, you know, the team has a bit of dinero to work with. After picking up the preview  of the full version of Gods Will Be Watching, I can tell you that it's all been put to good use. In fact, the game is already completed- the preview I got my hands on is the full game. However, Deconstructeam decided to push back the release date a bit so they can polish up the final product- which admittedly it does need. I didn't encounter any bugs or anything that truly hinders the game, but it did have a lot translation errors and little things that could easily be fixed in the month they gave themselves.

For those of you who are just now hearing about the game, Gods Will Be Watching was originally an entry in Ludum Dare 26, where the theme was "Minimalism" and took home the Silver in the Overall and Mood categories. In its home country, Deconstructeam also won the award for "Best Original Idea" at the International Videogame Independent festival hóPLAY in Bilbao, Spain. The minimalism in Gods Will Be Watching doesn't stem from the 8-bit style graphics, but in the gameplay mechanics. (although the pixelart shouldn't come as a surprise since it's a game that's affiliated with Devolver Digital). To call it a point-and-click adventure would be a misnomer, although it's the easiest genre to throw it into. You do, in fact, navigate menus and dialogue trees with your mouse and use it to point and click on things. Actually, it's all you do- but it's less of an adventure and more of a... Completely And Totally Fucked Scenario Simulator.

The game is six chapters long, and each chapter presents you with a puzzle that requires you to manage several different opposing forces at once, under an extremely tight deadline, with a severely limited action economy at your disposal. The first chapter requires you to negotiate a hostage situation- on the side of the terrorists. You have to keep the squadron of guards at bay long enough for your hackers to steal the information you need, all while keeping your hostages calm, or at least docile. You can charge up a device to make the hacking go faster, but you also need to keep an eye on the system security to make sure you maintain a stable connection. You can push back the guards by firing at them, or you could try to stall them by negotiating with your hostages' lives; just know that if you're too soft your hostages will assume you're distracted and attack you, and if you're too aggressive they'll get nervous and run.

It's a lot to keep track of, and you're going to fail a few times before you get the hang of it. It's like trying to balance a dozen spinning plates. You do your best to keep them all going, and after a couple of them fall you feel like a failure but at the same time you're grateful that there's less to keep track of but it just keeps happening the plates just keep falling so you shoot the last one in the leg to keep it from running oh god now it's bleeding out how did it get this bad- and then a flashbang goes off because you stopped watching the guards in the hallway. You have to learn from your mistakes and start over, and eventually you'll figure out the pacing of the puzzle and work through the chapter. Gods Will Be Watching is an incredibly difficult and stress-inducing game. I finally have a solid answer to every smarmy 'hardcore' gamer that thinks story-focused games are too casual. I swear if anyone ever says that to me again, I'm going to hand them this game and watch it impale their preconceived notions. Really the only bad thing I have to say about it is that its not something I could pick up lightly and play. I had to be in the right mindset and willing to commit to it- I've seen people compare it to Dark Souls because of this. But at least in Dark Souls you get the satisfaction of tearing apart monsters and you amassing power to carve a place for yourself in the world. Here, there is only you, and your ability to react to catastrophe. 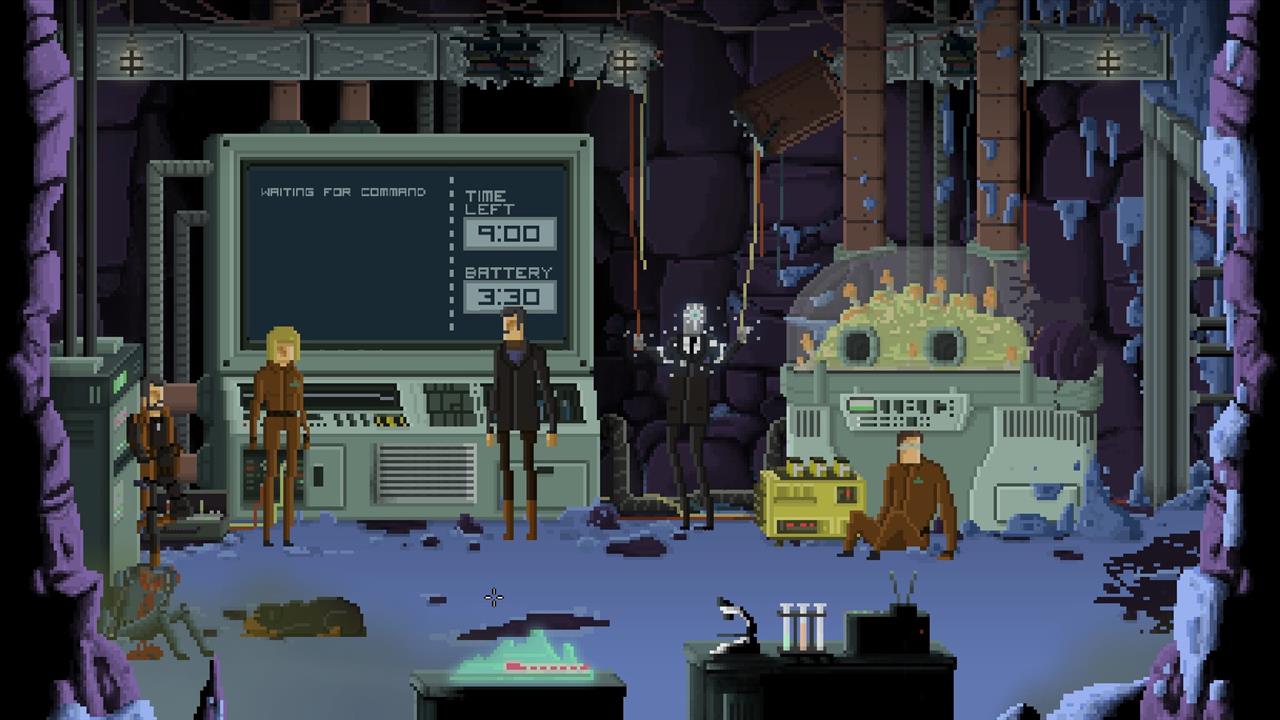 If you've played the demo, then you're familiar with the core mechanics and layout of the game. Actually, if you haven't played the original version that was made for Ludum Dare, you should do yourself a favor go over to Deconstructeam's website and play it now. It's being called a 'demo' but you should treat it as a proof of concept for the full version of the game.You're tasked with making sure as many people come out of this scenario as possible. If you die, or if too many other people die, game over. The game lets you know up front what challenges you are going to face, what actions you can take against them, and the relative boons and setbacks of each action. The biggest constraint in any situation is time. The game does a really good job of mixing up the challenges, and it still manages to break it up so it always feels like you're working against the clock- each chapter is essentially an action economy puzzle. In the first chapter, you have a fluid deadline in the form of guards in the hallway- you can stall them and push them back, but every time you do something besides deal with the guards, they creep closer to you. In the second chapter, you have to survive twenty days of torture. You have a solid deadline here, but the entire time it feels like it's a lofty goal beyond your reach. The real goal of the second chapter is to survive today. You don't even care how many days you have left, you only care about being alive at the end of today.

Gods Will Be Watching is a masterpiece of mood- it grabs you by the shirt and pulls you in close to breathe its hot, putrid breath in your face, and it doesn't let you go. A lot of games about morality, or that have morality mechanics, take an idealistic approach to it. Some games take a black-and-white stance by moving a slider further to the 'good' or 'evil' side as it passes judgment on your actions. Other games arouse your empathy by showing you how your decisions have effected other characters in the story. Gods Will Be Watching takes a more pragmatic approach, where all of the puzzle pieces are a moral decision with mechanical costs and benefits. The game doesn't overtly dwell on your decisions, but it does force you to deal with the consequences. At the end of each level, the gods who have been watching you (they are watching, remember?) show you how your decisions compare with other players- very much like the list of decisions Telltale gives at the end of every episode of The Walking Dead and The Wolf Among Us. The gods don't pass judgment, they only show you how you compare to the other players. It doesn't matter if you did the right or wrong thing, as long as you survive. Right?