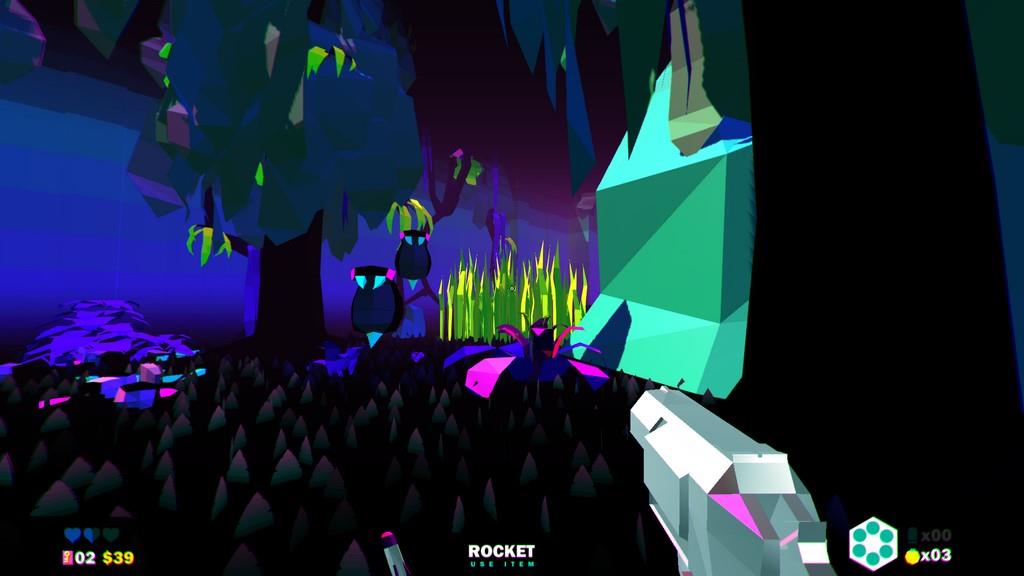 Earlier this year, I had did a preview for Heavy Bullets while it was still in Early Access. I had a blast with it, describing it as a "Roguelike +FPS + Dungeon Crawler ... from an alternate dimension where the future of videogames was accurately predicted in 1982." I picked up Heavy Bullets fairly late in its Early Access, and assumed that I was looking at something very close to the finished product. I was partially right, most of what I said in the preview still stands since there weren't any major overhauls to the gameplay. But there were enough tweaks and additions to warrant me revisiting it and reviewing the final product.

The first thing I noticed is that a bit of a story has been added- or, at least it gives you a clue as to why you're trudging through this neon jungle. When you start a new run, you see this short conversation before getting thrown into the labyrinth:

Our Security Bots are shooting

customers instead of creatures.

This is a PR nightmare!

Someone will have to make their way down

to the mainframe on 8 and manually reboot.

Most who attempt it will be killed.

You're a revolver-toting janitor at a hunting resort that's trying to collect the $5000 bounty on a haywire security system. That's just the right kind of ridiculous to fit in with a game that centers around shooting laser drones and giant fleas with a lethal Nerf gun.

The central mechanic for Heavy Bullets is brilliant. You start with six bullets, and you can reuse them as many times as you want as long as you pick them back up after you fire them. It makes you conscious of how scarce your resources are without actually depriving you of them. Not only do you have to make your shots count because you have such limited ammo, you also have to pay attention to where you're shooting since you'll have to collect it again. The game also has a few roguelike elements to it- when you die you lose all of the ammo, money, and items you were holding (unless you were smart enough to buy Life Insurance or carry a Last Willwhen you bit the dust) and every time you play, the hunting grounds will be different. You earn money by killing creatures and security drones, and spend it at the vending machines you'll find throughout the grounds. You can buy equipment like extra bullets, bombs, and potions, as well as character upgrades like more health and faster reloading. There are also special Bank machines that let you stockpile your money so you can pull from your account on your next run, and even store one item that you might need later. If you bought Life Insurance before you died, a portion of your money will carry over to your next run without you having to stash it in the bank, or if you were carrying a Last Will, all your money and equipment will carry over, but not your upgraded stats. In my opinion though, it's best to just play it Weakest Link style and throw your cash in the machine whenever you get the chance. The Bank is your friend. It is the only constant in this world of chaotic robots, bloodthirsty monsters, and neon. 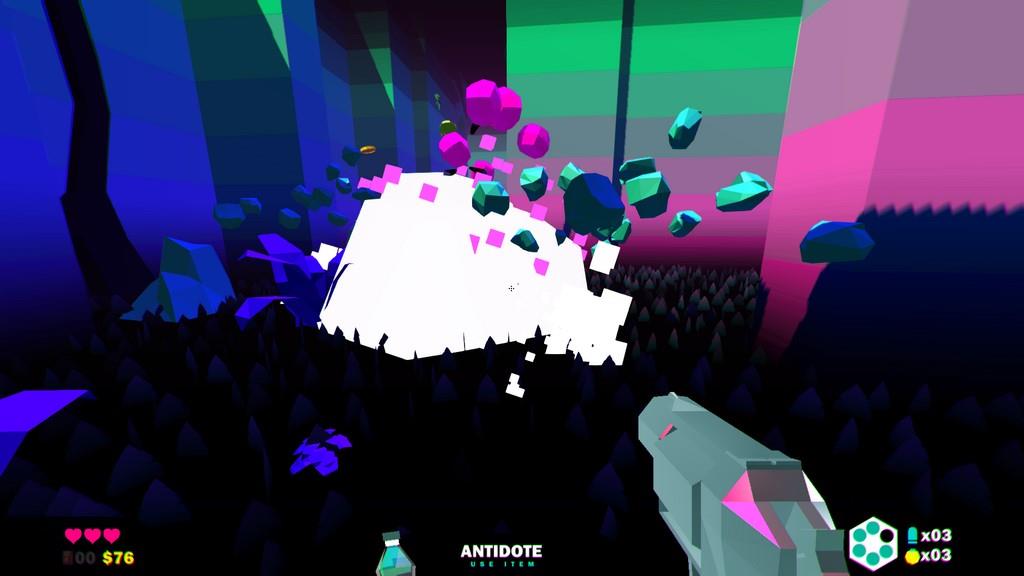 You'll find plenty of equipment to help you along the way, with random boons in the form of temporary hit points, melee attacks, explosive weapons, gold mining gear, and even high heels. Some of it is obviously more useful than others- you'll just have to find the equipment and use it to see if you like it or not. The only gripe I have with the equipment you pick up is how there's no aiming reticles outside of the revolver's tiny cross. When I'm lobbing a bomb, it'd be nice to have an aiming arc, or at least a circle on the ground where I'm going to throw it. If you hold the throw button you'll toss your bomb farther, but because there's no visual indicator it's difficult to be precise. Since this is a game where conserving your resources is a big deal, I barely ever use them.

Of all the updates that went into the final version, the one that I appreciate the most is that the rooms are a bit more complex now. I didn't have much of a problem with them in the past- there were multiple paths you could take to get to the next level, there were rocks and flora breaking up the rooms a bit to provide cover and texture, and dead ends to keep you feeling a bit lost and off-kilter at all times. But it was still a little on the flat and repetitive side. Now there's more texture on the walls, and more side-corridors to break up the flow of the level. Sometimes it works for you, because you might get a small hallway in a larger room that provides effective cover. Sometimes it just makes for an elaborate dead end. But the rooms have a bit more variety to them now, making the world feel much bigger. 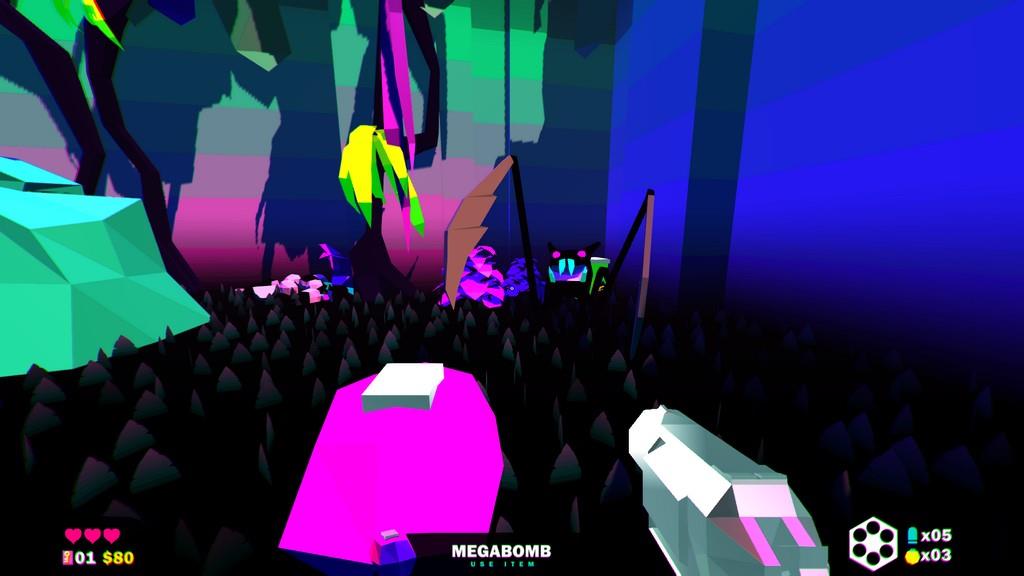 Another update that I really appreciate- you don't have to run all eight floors of the Highrise Hunting Grounds in one go anymore. After you complete a level, you can save your game and it will save your stats, currency, equipment, and progress for the next time you fire up the game. But you still have to make it to the end in one life, because if you die you immediately lose your save. Although everything you put in the bank, or saved through a Will and Testament will be there for you next time.

The one implementation that I wasn't a huge fan of is the controller integration. Mostly because playing with a controller feels loose and unwieldy compared to using my mouse and keyboard. On the plus side, you can use an Xbox 360 controller, a PS4 controller, or a PS3 controller- I only played around with a 360 controller so it might work better with the Dualshock 3 or 4, but I don't know for sure. I was really excited to see that you can remap the buttons on your gamepad- I wish more games let you manually layout your controls instead of giving you a list of presets to choose from. Unfortunately, the way it's implemented in the game is a little confusing. If you select the 360 controller, instead of showing that RT is shoot, RB is reload, etc. it shows that shoot is joystick1button1, reload is joystick1button2. So the only way to actually figure out the controls is to play around with them. And if you want to remap them, you have to take an extra step to make sure you assigned the right buttons to the right actions, since the menu doesn't make it clear for you. Long story short- unless you really want to use your controller, mouse and keyboard is the way to go in this game.

I really love Heavy Bullets' intense retro atmosphere. The bright colors, the pounding music, the survival-focused mechanics; it all comes together to make every room you enter feel like it's your last desperate stand. It does a really good job of giving you what you need to get the job done, but also keeping you on a short leash so it doesn't turn into a power trip where you're walking all over everything. It has a few ergonomic hiccups, especially with the controller integration, but ultimately I think it delivers an intense and immersive experience that rivals most AAA FPS games.

Heavy Bullets encourages smart, slow, and steady tactics instead of jumping in and unloading in every room. It lets you be a bad ass one man army, while still keeping you struggling and hungry for more. Outside of a few ergonomic missteps, especially with the controller integration, it delivers an intense and immersive experience that rivals a lot of AAA FPS titles.