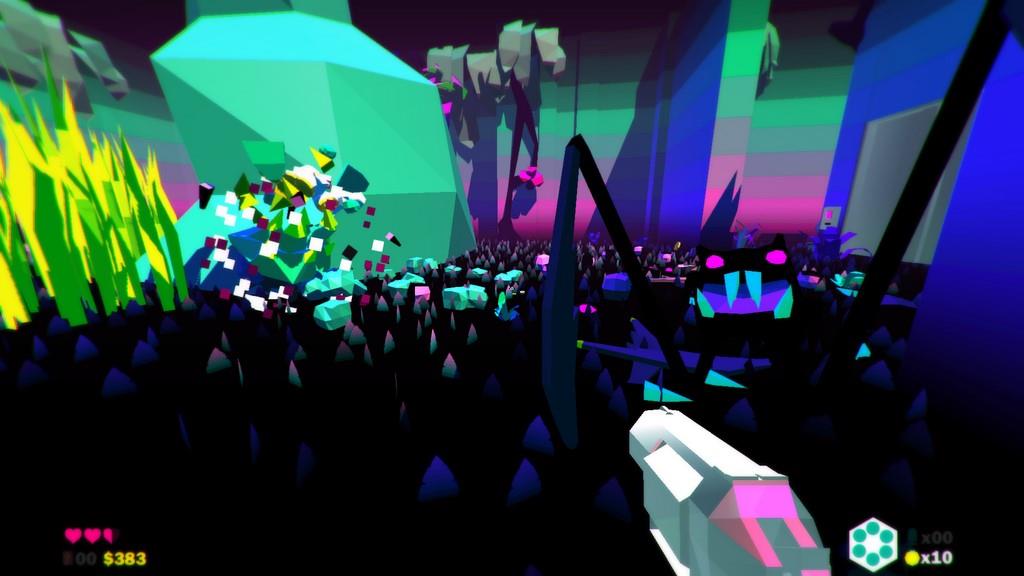 If I needed to select keyword tags for Heavy Bullets to make sure this article made the most out of the all-powerful Google-algorithms, I'd describe it as a Roguelike + FPS + Dungeon Crawler. But when I'm describing it to my friends, I tell them I'm fairly certain that Heavy Bullets is from an alternate dimension where the future of videogames was accurately predicted in 1982. The game itself is sort of like being put into one of the VR helmet prototypes from the 90s and getting into a PvE NERF fight- and it's a nearly endless source of neon-tinted fun. It's currently in Steam Early Access for only $9.99, but don't let it's beta status scare you away. It's a fully functioning game that only has a few additions and tweaks left to go before it's finished. At least that's what the game's creator Terri Vellmann has to say about it.

The story behind Heavy Bullets is very bare bones. There's no elaborate back story about you being a lone survivor in a world gone mad, no tutorials explaining why you're here, no cutscenes, no other characters to interact with. Just an opening screen that says

You come to in a pink and blue labyrinth that's choked with exotic flora, blood-thirsty fauna, and homicidal security drones. Everything you need can be purchased from vending machines that are littered throughout the complex, or found in small caches that are either guarded by monsters or hidden behind secret walls.

You start out with six bullets, three grenades and three hearts for your health bar. The good news is, those six bullets are probably going to stay with you for your entire run; the bad news is, once you fire them off, you have to go pick them back up before you can reload them into your gun. I love this mechanic because it's a really great way to encourage resource conservation without actually depriving you of ammo. You're also able to carry a limited number of items that give you different abilities, passive buffs, or a single-use effect like bullet time pills. But unless you have a backpack, you can only carry one kind of item at a time. You can also buy character upgrades like extra health, faster reload, bullet and coin attraction. The problem is, once you die, you lose everything you had on your person. All of your coins, keys, bullets, items, upgrades- everything. Fortunately, there are bank vending machines that let you deposit your coins for use in a future run; and you can also purchase Life Insurance that will automatically deposit a percentage of your coins when you die. Or if you die while carrying a Living Will, your keys, coins, bullets and grenades (but not items and upgrades) will carry over to your next playthrough. Otherwise, every run begins with a clean slate and a completely different maze for you to explore.

As you delve deeper into the eight levels, the mazes become more densely populated with a wider variety of enemies. On the first level, you usually only encounter stationary turrets, dog-monsters, and poisonous snakes. But by the fifth level, some of the turrets have legs and can walk around while others are shooting rockets, some of the dog-monsters can fly, and now there's these suicidal egg monsters that run into you and blow up. Even though the name Heavy Bullets suggest an atmosphere of a guns-blazing action movie, the gameplay is more akin to a first person Metal Gear. Charging into a room full of enemies is a sure way to get yourself killed and lose all of your progress. Here, guerrilla warfare is key. You'll need to duck behind walls to avoid turret fire and draw out your more mobile enemies so you can pick them off one by one. 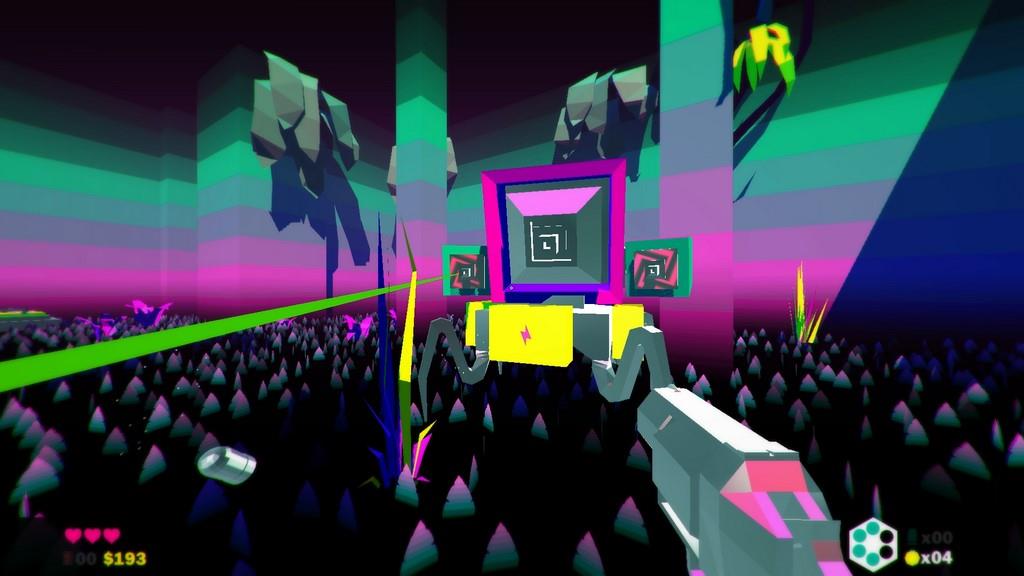 This is a quiet game that relies heavily on audio cues. Whenever an enemy becomes aware of your presence, they'll let out a little beep or chirp to warn you that you're about to get hit. There are a few musical interludes, but for the most part the soundtrack is ambient jungle noises. Normally I prefer having a consistent soundtrack, but the bare bones music and sound effects by Doseone do a lot of the heavy lifting to immerse you into the game. When I'm crawling through the jungle-maze with a screen that's blinking red and everything is silent except for my digital blood pounding in my ears, I feel like a blood-stained Rambo-fied badass.

Just know that if you're playing to win, there's no such thing as a quick run of Heavy Bullets. Eight levels of guerrilla warfare in a randomly generated maze, with randomly generated enemies, vending machines, and power ups do not make for bite-sized gameplay. The first time I made it through all eight levels and died fighting the mainframe, it took about 105 minutes. This isn't like Rogue Legacy where you can kill a half hour and two of your children by running through a castle earning enough money to buy a couple of upgrades. The only quick runs of Heavy Bullets are the ones that end too soon.

Even if you aren't into the whole 80s/90s revival that's going on right now, Heavy Bullets is a great first person shooter that's easy to pour hours upon hours into.  It's refreshing to get into a FPS that encourages you to play smart instead of jumping into a room and unleashing a lead hose into a squad of goons. Plus, the fact that it's randomly generated really bumps up the replayability.