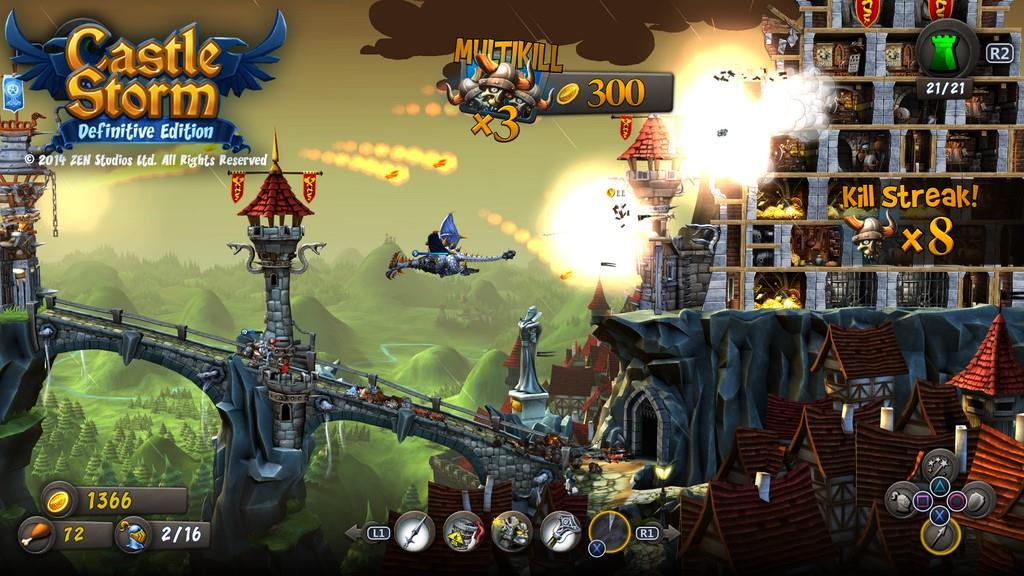 Written by Jeremy Duff on 10/15/2014 for PS4
More On: Castlestorm: Definitive Edition

Along with the era of downloadable content that we have seen ushered in over the past couple of console generations, we have seen another trend arise as well: the "final" editions of games. Some are called the Definitive edition, some Ultimate, others Complete, but they all bring the entire experience of a given game into a single package for a set price. Most of the time these packages hit me as simply a means to squeeze a little bit more money out of a product before the company takes it out to pasture. However, there are some cases when efforts are clearly made to ensure that the game and its additional components are improved to the best they can possibly be.

Zen studios is attempting to do just that with Castlestorm: Definitive Edition on the PS4 and Xbox One. Sure, this is a single package of all of the content that was released for their stellar digital game, but it is also a bit more. Featuring vastly improved visuals, new control options, and a variety of new modes and spells, this game truly proves to be the best version of Castlestorm that you can get.

For the most part, this is primarily the same game that I loved back in early 2013. The game takes the concept of Angry Birds, combines it with tower defense/capture, gives glimpses of classic hack-and-slash classics, and throws a heavy dose of role-playing and player advancement into the mix for good measure. They also add in a heavy dose of LEGO building by letting you build your own castles, too. It sounds absolutely crazy, but it works incredibly well.

The game starts off pretty simple. You have a castle on one side of the screen and your enemy has one on the other. Using a long-ranged ballista, you have to knock down the walls of the enemy’s keep in order to win, while hoping that yours stands long enough for you to claim victory. You will start with arrows and spears and eventually unlock a variety of projectiles that range from boulders to blocks of ice to flatulent sheep. You also have various ranks of troops that you can spawn from your base to head across the battlefield and take the battle to the opposing troops’ front door. Troops aren’t free, though, and you have to manage your feed resources in order to "feed" your army. There are a variety of troops, from dispensable foot soldiers to skilled knights and warriors, that attack both up close and from afar. 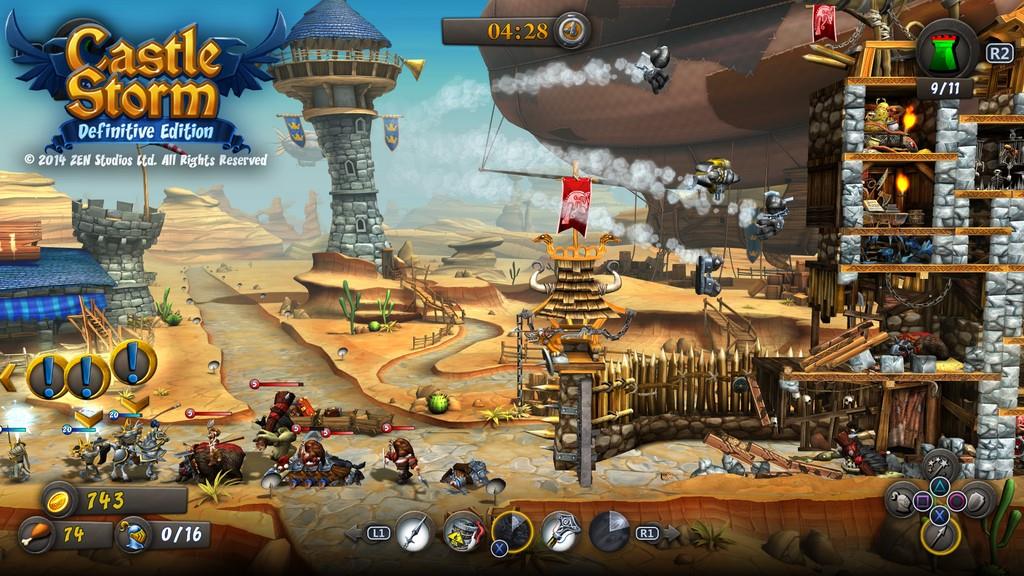 To be honest, what I described is just the most basic parts of the game. You also have the ability to teleport your hero onto the battlefield and take on things in a hack-and-slash manner, magical spells that can be cast to both assist your troops and directly attack your enemies, and options to design and construct your own castles. There is a lot here and it is rolled out to you with expert pacing. Plus, all of these things will grow and evolve as you earn experience and level them through RPG-like elements. Once you get all of these individual aspects under your belt, you then have to learn to handle them all at the same time, switching back and forth between them on the fly during battle to succeed. This is when the game both gets a little difficult and becomes insanely addicting.

Being the Definitive Edition means that there have to be some new bells and whistles, right? From a content perspective, in addition to the main game, the pack now features both DLC campaigns that were released: "From Outcast to Survivor" and "The Warrior Queen." If you enjoy the main game, you will love these two. Both campaigns feature the same great gameplay and hilarity that Sir Gareth’s quest had, but with some slightly different experiences. Each one features new weapons and troops that mix up things a bit. This means that you won’t be carrying over your progress from the original adventure, but instead will be starting fresh, leveling up, and building an entirely new arsenal of soldiers and artillery. 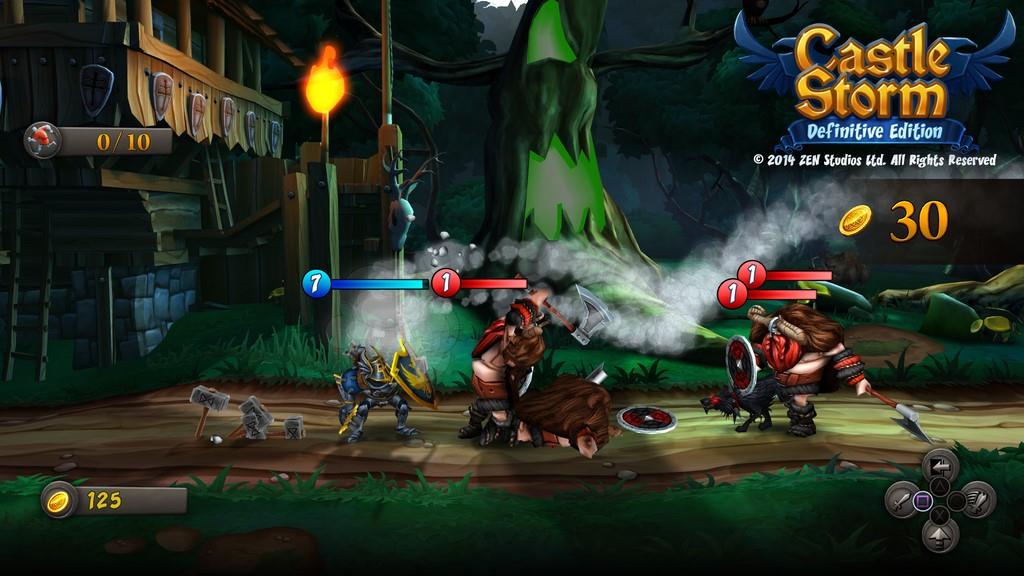 I loved getting fresh content of an already stellar experience. Unfortunately, I never picked up the DLC on the game’s original release, so this was all new to me. It is clear that Zen knows and understands what works with the Castlestorm experience, because these packs are both exactly what they should be: more stellar content for a solid base game. They don’t try to break the mold in any way, but rather serve you some fresh experiences on an already fine-tuned package.

The PlayStation 4's visuals definitely make a noticeable jump from the XBLA game I originally played. The game has always had a very colorful and entertaining art style, but the higher resolution combined with the 60 frames per second made things silky smooth and very much like a cartoon that has come to life. It still has the same comedic presentation with colorful, lighthearted characters that are filled to the brim with personality. Plus, there is the excellent soundtrack, too, courtesy of Waterflame.

Unfortunately, my main complaint with the original game still holds true today, and that is some frustration with the controls. First off, speaking broadly, they can be a little overwhelming considering how many things you have access to at any given moment. Thankfully, that is something that gets better over time as you become more familiar with everything. More specifically, however, aiming and pinpointing the ballista in particular can be a little bit problematic. It is nice to have a small guide that gives you an indication of your trajectory, but it doesn’t help very much given how wide some of the battlefields can be. It becomes nearly impossible to pinpoint your aim at great distances with anything other than trial and error. It doesn’t hinder the experience, but it can definitely be frustrating when you are trying to complete a special objective like rack up a certain number of headshots on the larger maps.

There are a lot of other little tweaks and additions that compliment the core gameplay. Things like voice control options, tons of gameplay modes, and cooperative play options make the entire CastleStorm experience is an absolute joy. The game itself is incredibly addicting and some of the most fun I have had in a long, long time. That was something that I said about the game when it originally launched, and it remains true to this day for this version. There is just so much to do and it is all presented and rolled out to you in a manner that keeps things feeling fresh every step of the way.

If you don’t own the original release, you absolutely must add Castlestorm: Definitive Edition to your collection. It’s playable in short burst and long stints alike, and the variety in the gameplay keeps things new, regardless of how long and when you play. There is still a bit of a learning curve to the control system, but sticking with it pays off. Do not hesitate to pick this one up.

A year-and-a-half later and Castlestorm is still a complete blast to play. The added content and updated visuals round out an already stellar package. As long as you can get used to the controls, this is one that will keep you entertained time and time again.