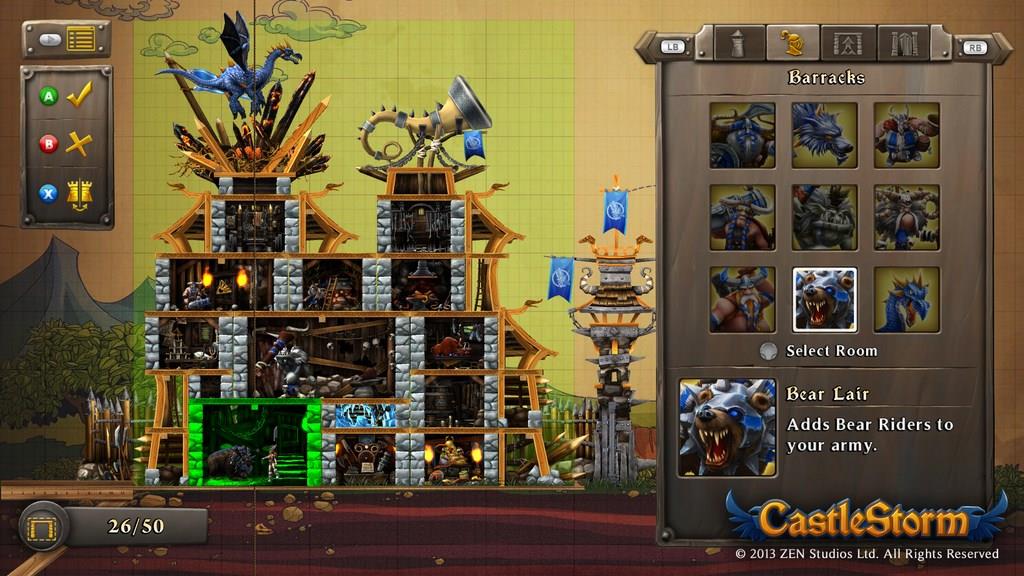 Written by Jeremy Duff on 5/29/2013 for 360
More On: CastleStorm
In the past couple of years, an interesting trend seems to have developed in the gaming industry: genre mash ups. We have seen puzzle meet RPG, rhythm meet action, and even a pinball-RPG (Epic Quest anyone?). Some of these combinations have worked, others haven’t, but it is still fun and refreshing to see developers try new things. It can be risky to try something new such as this in today’s finicky industry; it is a gamble to bet it all on a combination that you aren’t sure that the public will welcome. As crazy as it is to try to combine two genres that don’t usually mix, it is downright ludicrous to think about blending together even more. Thankfully for Zen Studios, that lunacy has paid off with CasteStorm.
Remember when you were a little kid and you always wanted to mix together your favorite things? I would imagine that is pretty much how the pitch for CastleStorm went; the game takes the concept of Angry Birds (and who doesn’t love Angry Birds?), combines it with tower defense / capture, gives glimpses of classic hack and slash classics, and throws a heavy dose of roleplaying and player advancement into the mix. Oh, and to top it all off, they let you build your own castles in a manner similar to playing with virtual LEGO blocks. As crazy as it all sounds, it works. It works really well actually.
The game starts off simple enough, as a something akin to Angry Birds. You have a castle on one side of the screen and your enemy has one on the other. Using a long ranged ballista, you have to knock down the walls of the enemy’s keep in order to win, while hoping that yours stands long enough for you to claim victory. You will start with simple arrows and spears and eventually unlock a variety of projectiles that range from boulders to blocks of ice, to flatulent sheep. 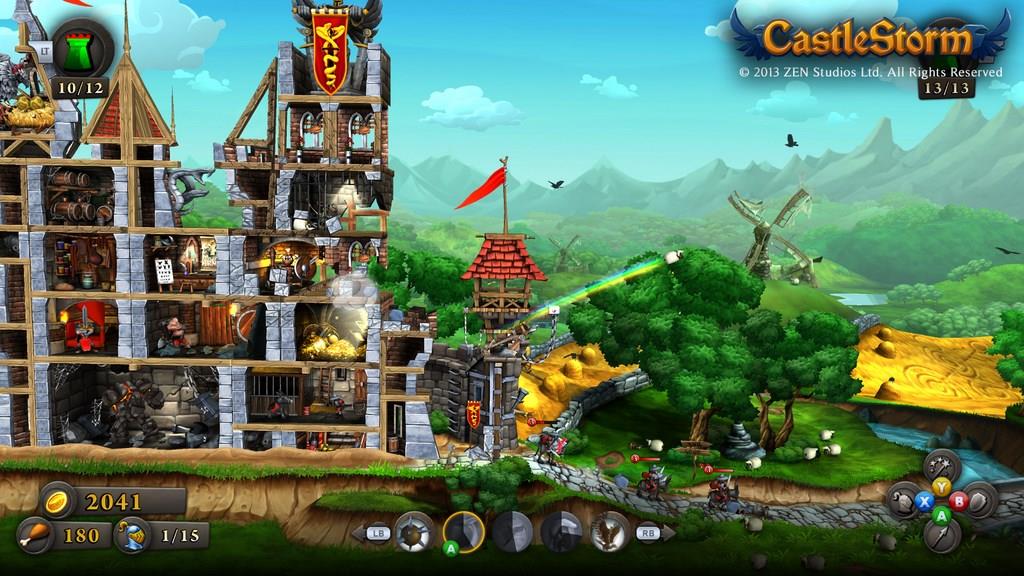 That isn’t all though, shortly into the adventure you will be given various ranks of troops that you can spawn from your base to head across the battlefield to take the battle to the opposing troops’ front door. Troops aren’t free though and you have to manage your feed resources in order to “feed” your army. There are a variety of troops from dispensable foot soldiers to skilled knights and warriors that attack both up close and afar.
Perhaps you are getting the hint by now that CastleStorm keeps piling on the tools and options. We aren’t close to being finished discuss in them yet, but I want you to know that the same manner in which I am explaining them to you is very similar to how the game rolls them out to you: in stages. There is a lot to do in this game, in terms of everything you will eventually come to control, but the game rolls them out to you in a manner that lets you get used to one before it forces you to take full control of another. After your troops are in order, then you can head out into the field yourself as a their fearless leader.
Players also have the ability to spawn a unique hero, depending on your allegiance, and head out onto the field for some first-hand combat. This is when things really get intense because the you will “zoom in” on the battle and control your hero directly on the battlefield. Your time on the ground is limited so you have to make the most of it and strategically take down the enemies who are causing you the most problems. Once you have this aspect under your belt, then you have to learn to put them all together at once. This is when the game both gets a little difficult and becomes insanely addicting. 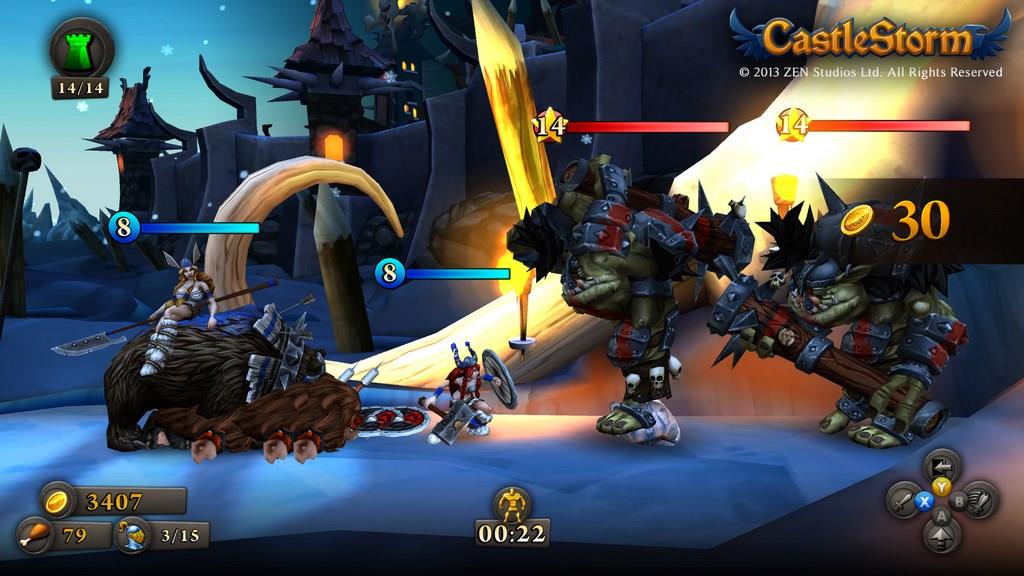 Controlling all of these aspects simultaneously is a daunting task, but luckily the controls have been tuned in order to make it them intuitive and easy to use. Each of your face buttons controls a certain aspect of the battle: the A button handles your ballista, X spawns your various troops, Y taps into the direct battlefield manipulation including your hero and magic spells, while B is reserved for defenses of everyone. The bumpers are used to cycle through your various options in each of the areas, meaning you have a very large variety of weapons at any given time. I won’t lie, it takes a little getting used to, but once you get the hang of it you will see the genius in its design. You can switch back and forth between them all without thinking and the battle will quickly develop a flow that makes you feel like a true battle-tested general.
We still aren’t done though, there are two more key elements to the game that I have yet to touch on. The first is the construction and maintenance of your castle; while the game provides you with a variety of pre-built forts, it also gives you the ability to both alter the existing ones and build your own from scratch. The castle editor plays out like a digital LEGO block simulator, with you selecting from a variety of pieces and fitting them together as you see fit. Each piece has their own special features and provides you with unique tools on the battlefield. You have to think about both what tools you want to have access to in battle, as your troops are determined by which rooms you build into your castle, and about smart construction as well.
Remember, your enemies are going to be chipping away at your castle during the course of battle, and once a room is destroyed in your castle, you will lose access to whatever tools it provides. As a result, your troop selection and some enhancements will diminish over time as your keep crumbles. This is something you have to keep in mind during the build phases in order to make sure that you most effective troops and powers are the last to fall.

Finally, there is a heavy dose of RPG-like enhancement added to every single one of these features. Every tool in the game, from your various projectiles to each individual soldier and the various rooms/additions of your stronghold can improved by spending gold that is earned in battle. As you level them all up, they become stronger and more valuable to your war efforts. This gives the game a little bit of customization as you can upgrade depending on your preferred battle-tactics. For example, I depend on my ballista for the bulk of my strategy, therefore leveling up my projectiles was a top priority for me; unfortunately, this also leads to my troops being at a disadvantage on the battlefield, meaning I almost always had bad guys knocking down the front door of my castle (literally).
While the main game combines all of these elements together into a singular experience, CastleStorm also gives you the ability to isolate each one for some extra-curricular fun in  order to earn gold for the benefit of your cause. You can opt to play survival modes that either set you solely behind your ballista or out on the field in a hack-and-slash style endurance match with one of the games numerous heroes. Sure, these are simplified experiences but they are also incredibly fun. They provide a nice change of pace from the overwhelming action of the campaign (of which there are two unique paths, one for the knights and one for the vikings) and give you the opportunity to pocket a lot of cash. All of these modes are also available to be pad with friends. This is when the game shows its charm as your will finally get to see if your tactics can can truly stand up in battle.
Perhaps the best part of the entire experience is that all of this is wrapped up in a very colorful and entertaining world. The game shines through with a very comedic presentation; if you ever played the Epic Quest pinball table, just imagine that world fleshed out into a full experience. The characters are all colorful and lighthearted, while being incredibly detailed and full of “character”. Complimenting this great visual experience is a really awesome soundtrack too, courtesy of Waterflame. 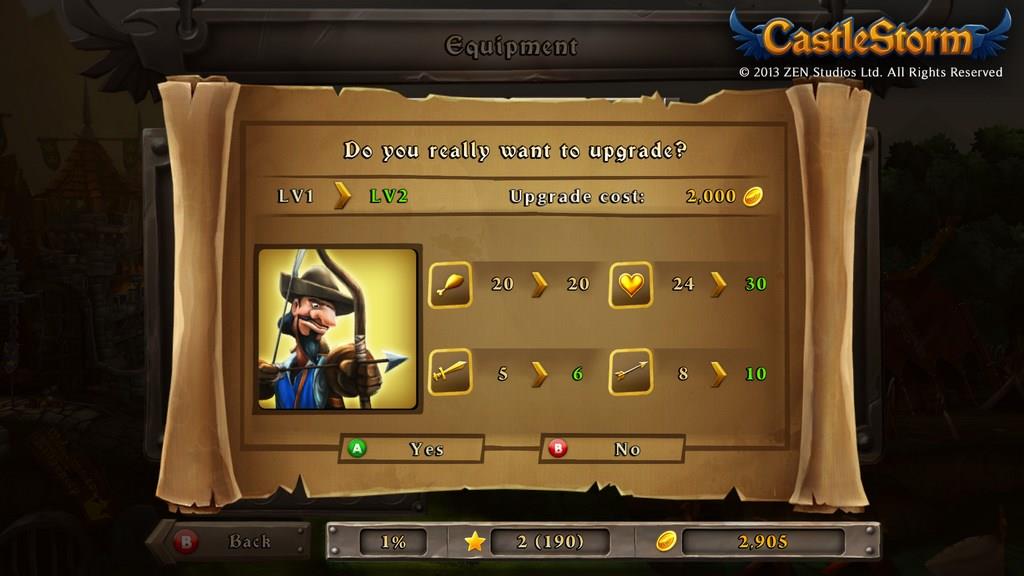 The entire CastleStorm experience is truly a joy every way. The game itself is incredibly addicting and some of the most fun I have had in a long, long time. Plus, the manner in which it is structured and rolled out to the player is designed to keep things fresh every step of the way. The campaign structure is near perfect as it balances both the story-advancing missions with fun sidequests while guiding you with an invisible hand; although you can tailor and groom your troops and skillsets however you see fit, the level design helps you strengthen each of them naturally in order to make sure you never fall behind (developmentally) as a whole. However, you will never feel pressured to do so, which is something a lot of games struggle with.
If you like games and fun, and who doesn’t, this is one title that you simple must add to your collection. It’s playable in short burst and long stints alike, and the variety in the gameplay keeps things fresh regardless of which you choose. There is a bit of a learning curve to the control system, I won’t lie. You will likely go through a very short period of time where you feel overwhelmed by all that it puts you in control of; however, just stick with it and before long you will be managing the battlefield like a true, battle-tested general. I just can’t wait to see the online servers fill up with other players so that I can truly test my skills against the world. Run, don’t walk, to the marketplace and pick this one up without a second thought.
CastleStorm is insanely addictive and a ton of fun. Zen has proven that they can do plenty more than pinball with an amazing title that is just as enjoyable alone as it is with friends. The controls do take a little getting used to as you have a lot of options at your hands with your towers, troops, and some lovable heroes, but once you get the hang of it, you won’t be able to put it down.