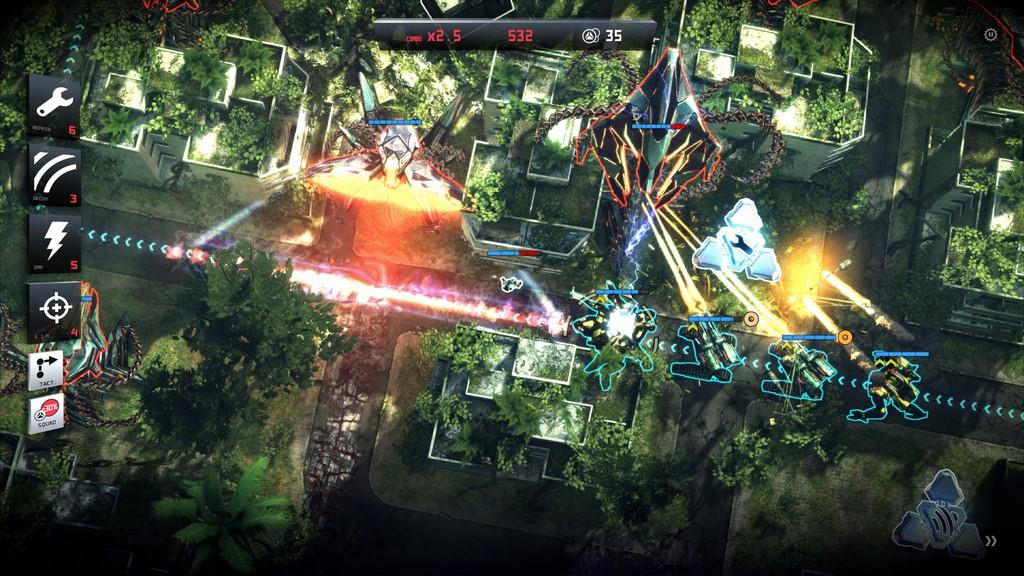 If you played Anomaly: Warzone Earth, then Anomaly 2 will fit like a glove because they are essentially identical to one another, aside from a few fairly arbitrary changes here and there. Once again, you’re taking castoffs from the Command and Conquer franchise into battle through the streets of major cities, with the good ol' U.S. of A. taking center stage this time.

When I say the sequel is essentially identical to its predecessor, I’m being 100-percent serious, because the two games look, sound, and play remarkablly similar—with all the positives and negatives of the first game being transferred intact to the second. The commander still moves too slowly and can get caught out of position collecting powerups to effectively deploy special powers; the dialogue is still sparse, trite, and pointless (and this time, the incessant cursing comes off as childish in ways I didn’t notice the last time); the graphics are, despite the next-gen hardware upgrade, still all grays and reds and urban decay colors; in fact, I was hard pressed to even pick out a single instance of a real noticeable graphical upgrade; and finally, the gameplay is still all about leading your squad from point A to point B while accomplishing some random task, like destroying certain enemy units, protecting friendly ones, and so on and so forth. This time, however, you do get some new siege-like situations where you have to protect a building from ever-advancing enemy towers.

One other feature new to the singleplayer portion is the ability to morph your units. Basically they’re all transformers now with a vehicle mode and a sometimes vaguely robotic mode that’s often optimized for urban warfare. It’s a nice touch, but it feels very arbitrary to me—almost like the transformer idea came first and then they had to develop units with specific handicaps that required morphing to overcome. For example, there are artillery units that can only fire straight ahead in a 30-degree arc, which makes them almost useless in the most often dense urban environments in the game—unless you morph them, that is. In real life, you wouldn’t even deploy a weapon like that to that sort of theater.

But I guess none of that matters because the real star of the show with Anomaly 2 is supposed to be the multiplayer. In multiplayer, one side plays the humans and controls an armed convoy, while the other side controls the aliens and, in traditional tower defense-style gameplay, must build and deploy defense towers to keep the convoy away from its generator. "Asymmetrical" is the big buzzword with multiplayer now, and Anomaly 2’s multiplayer is definitely that. It really caters to veterans of real-time strategy multiplayer matches, with the only real difference being that one side only attacks and one side only defends.

Again, like with its predecessor (and if you haven’t read my review of Anomaly: Warzone Earth, you really should because it’s amazing), Anomaly 2 is a fun, if insignificant, way to kill some time with a controller in your hand, and if you’re really into getting out there and dominating strangers in contrived gaming scenarios, then Anomaly 2’s multiplayer has that covered as well.

It's all about the multiplayer this time around in the Anomaly franchise. Anomaly 2's singleplayer portion is basically identical to the first game, so if that was your jam, then by all means, go weapons free. If it wasn't your jam, then maybe the multiplayer will keep you interested. Either way, there are fun and interesting gameplay ideas hidden away in Anomaly 2 that can keep you busy over a boring weekend.