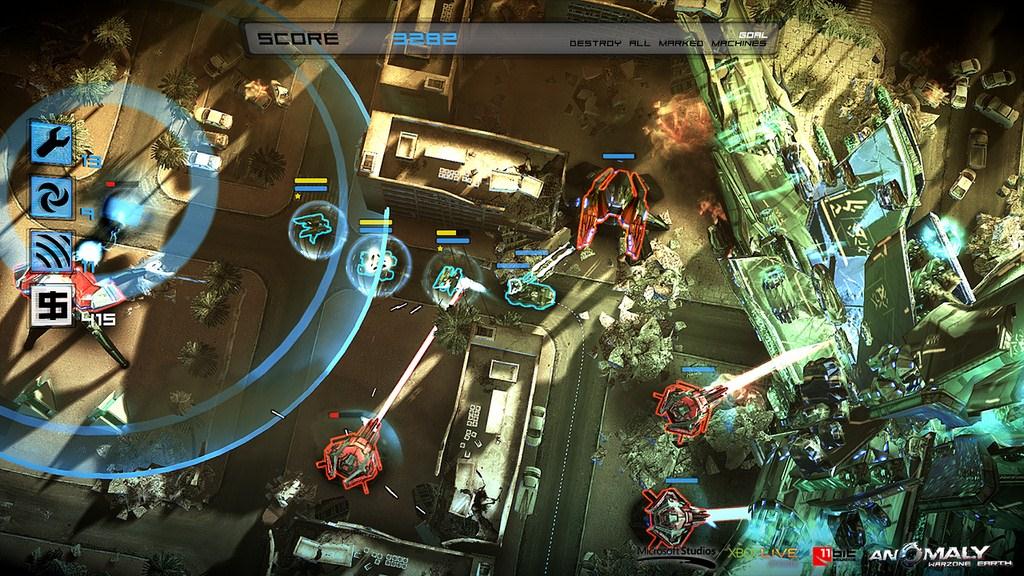 Written by Nathaniel Cohen on 4/6/2012 for 360
More On: Anomaly: Warzone Earth
Tower defense games, spun off from the real time strategy genre, are not necessarily a new phenomenon, even though they have only recently seemed to gain widespread popularity. Pretty much every console and computer operating system has had its own tower defense games; probably because there is nothing as simple as or potentially more addictive than placing static units on a field and hoping whatever mobile units you’re up against can’t get across safely. The strategy involved tickles the brains of many a gamer at a relatively small cost to the developer.

Interestingly, the tower defense game’s evil twin, the tower offense game, is pretty much just as old. Again, probably because creating something pleasingly strategic doesn’t get much simpler. They’re not as widespread, but just because a tower offense game doesn’t get as much attention or as many downloads as Plants vs. Zombies doesn’t mean it’s not worth your time.

With Anomaly: Warzone Earth, 11 Bit Studios gives us a tower offense game steeped in the kind of gritty urban “modern warfare” milieu that characterize many games that come out today. Your job in Anomaly: Warzone Earth is to lead elements of the fictional “14th Platoon” through the streets of Bagdad and Tokyo in the hopes of beating back an alien invasion - or maybe instead of an alien invasion, Earth just happens to be the ad hoc battleground for two other alien races intent on destroying one another. Either way, what are initially thought to be meteors strike the capitals of Iraq and Japan and all hell breaks loose. 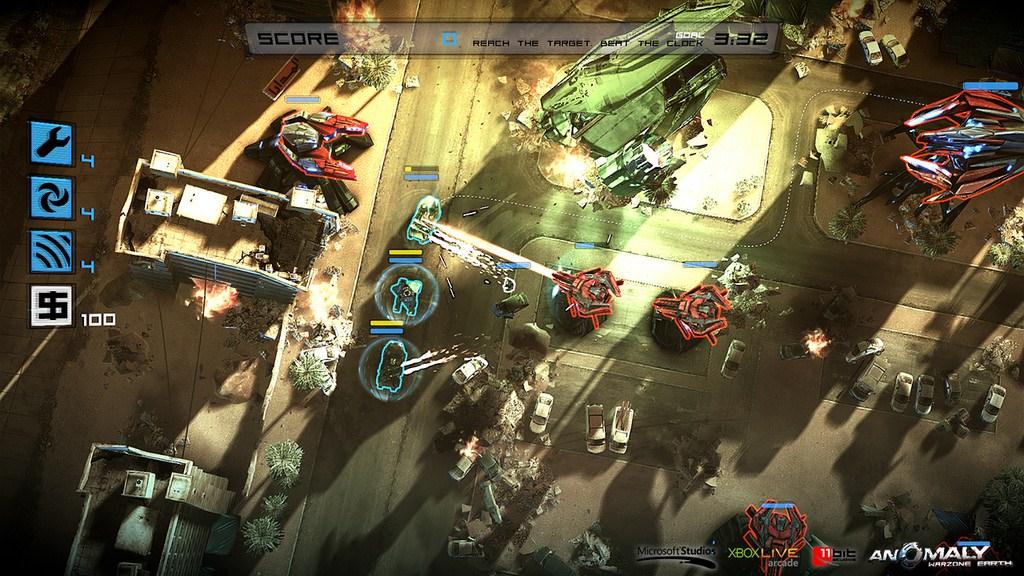 That’s pretty much the extent of the story in Anomaly: Warzone Earth, save for a last mission twist that isn’t really hinted at, but shouldn’t surprise anyone. There aren’t cut scenes or even really characters in a true sense. There are a few speaking roles that represent the coalition of forces engaged in battle with the 14th Platoon, but the writing and voice acting are as sparse and perfunctory as possible. The dialogue exists as a tool to inform the player of what is happening. Honestly I’m surprised they bothered with fully voiced dialogue since it doesn’t add much to the game.

The reason the dialogue adds nothing to Anomaly: Warzone Earth is because the only reason anyone will play it is for the strategic problem-solving that goes into “solving” a mission. At the start of each level, the player is given a story-based goal and an urban battleground to negotiate. Goals range from simply making it across the battlefield with at least one unit left, to the destruction of specific structures or escorting friendly units. The game has a lot in common with the Command & Conquer series in its goals, level, and unit design. After you’re given your goal, you’re given a set amount of cash to purchase up to six units; you can earn cash mid-mission to buy more units by chaining together defeated enemies into combos and by collecting the game’s resident “unobtainium” wherever and whenever you find it. These units fit into pretty standard “high armor, low attack” and “low armor, high attack” categories. The motley assortment of tanks, APCs, and high-damage missile units won’t surprise anyone, and even when later units are unlocked like flame tanks and shield projectors, you’re still not going to see anything particularly original. Besides vehicles you also get powers that you collect from fallen enemies or that are airdropped by allies. There are four of these: Repair, Smoke, Decoy, and Airstrike. Their names alone tell you everything you need to know about them. 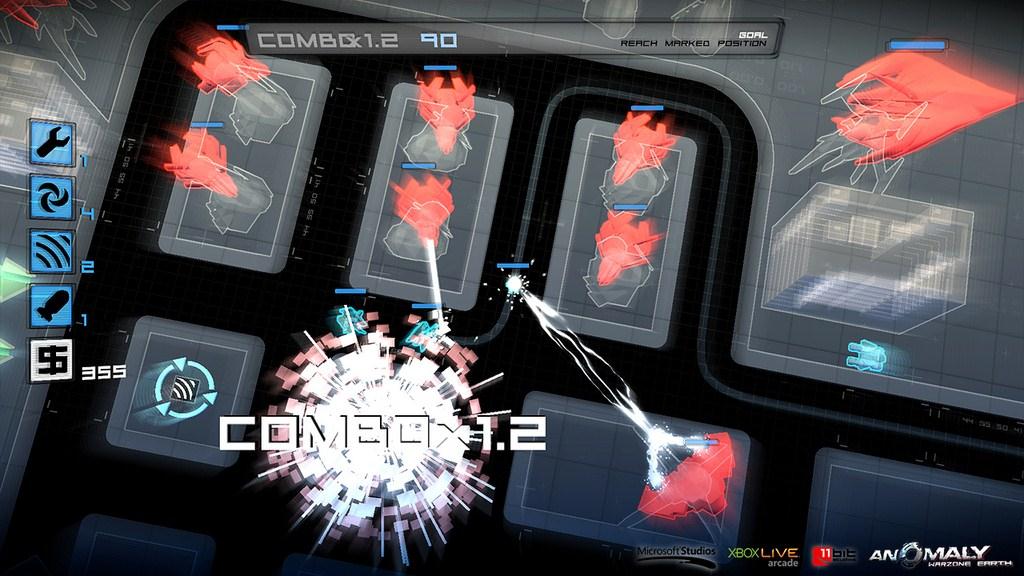 Along the way, you’ll face the basic enemies you’d expect like low damage “filler” units that outnumber every other turret on the battlefield, high damage area-of-effect turrets, lightning turrets whose beam arcs to multiple units, and so on and so forth. Here at least, the game shows some creativity by throwing some truly original and unexpectedly dangerous units at you that don’t even have to deal direct damage to be deadly. Honestly, some of the enemy units felt a little unbalanced to me and that led to many rage-inducing difficulty spikes. It also doesn’t help that because of the limitations of the Xbox 360 controller, placing lifesaving powers on the battlefield is often too slow to matter. It’s very easy to get caught so out of position collecting powers from defeated enemies that you can’t get back in time to stave off the squad’s destruction. It’s not a big problem, but on some of the hectic later levels, it can make you pull your hair out.

When you tire of Anomaly: Warzone Earth’s story mode, you have two other modes to check out. Technically it’s three, but two are only slight variations on each other. Tactical Trials mode, which is exclusive to the Xbox 360 version of the game, takes place inside a virtual simulator and features almost puzzle-like levels that reward careful planning rather than brute force. That mode is nice; however, the computerized female voice that gives repetitive status updates every 2 seconds is something I could have done without. 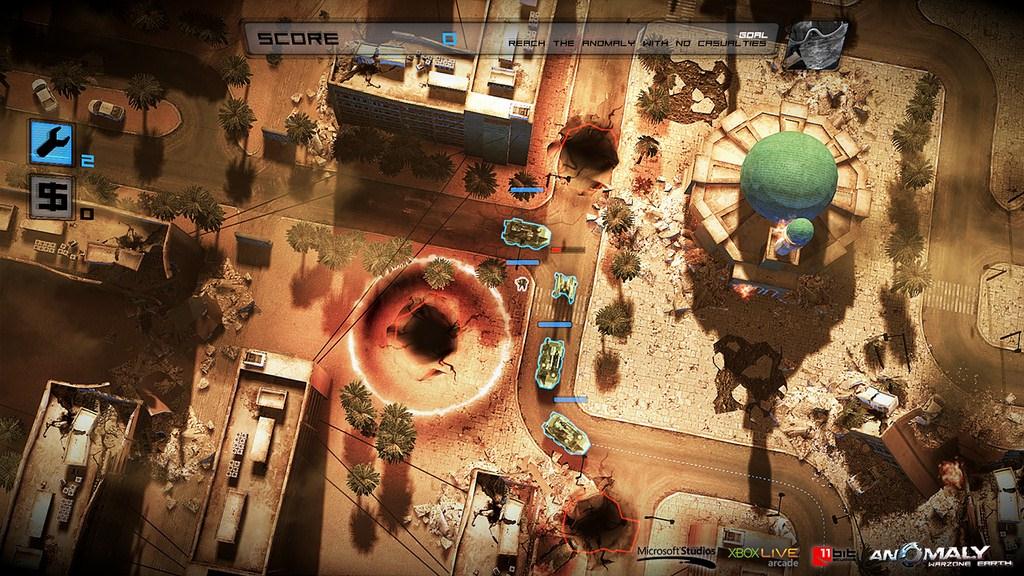 The other two are Bagdad Mayhem and Tokyo Riot. These two modes offer up “waves” of enemies to deal with. In Bagdad Mayhem, you have ten waves (that all take place pretty much on top of each other) with the goal of destroying the enemy generator within a five minute time limit. Since all the waves happen in the same general location, they overlap and that means that every enemy you leave alive in one round will be there for subsequent rounds. Tokyo Riot tasks the player with getting through 18 islands, with each island offering up a different objective like destroying certain units, escorting friendlies, or simply collecting as many power ups as you can before your convoy reaches the bridge to the next island. Basically, they’re similar to the story mode objectives. All three of these secondary modes are fun because they distill the game into a slightly purer form by making the game less about contrived story beats and more about how to best get through each wave with the highest score possible. Your score is then posted on the leader boards so you can see how you stack up against your buddies and the rest of the known world.

All in all, Anomaly: Warzone Earth is a fun, albeit lightweight, experience. The graphics and sound (minus the voice acting) are top notch and despite the few niggling issues with the speed at which the commander moves and some possible balancing issues, the game is a fun way to kill time. The story mode should make for a nice stay-at-home weekend, while the other modes offer you the chance to flex you thinking muscle, achieve the highest score possible, and prove to the world that no one is better than you at getting safely from point A to point B.

Take the tower defense genre, fold it back onto itself, slap it with Command & Conquer and you’ll get Anomaly: Warzone Earth. What you get with Anomaly: Warzone Earth is a solid, if unspectacular, tower offense game that’s maybe just a hair too thin and unbalanced to truly be something special.