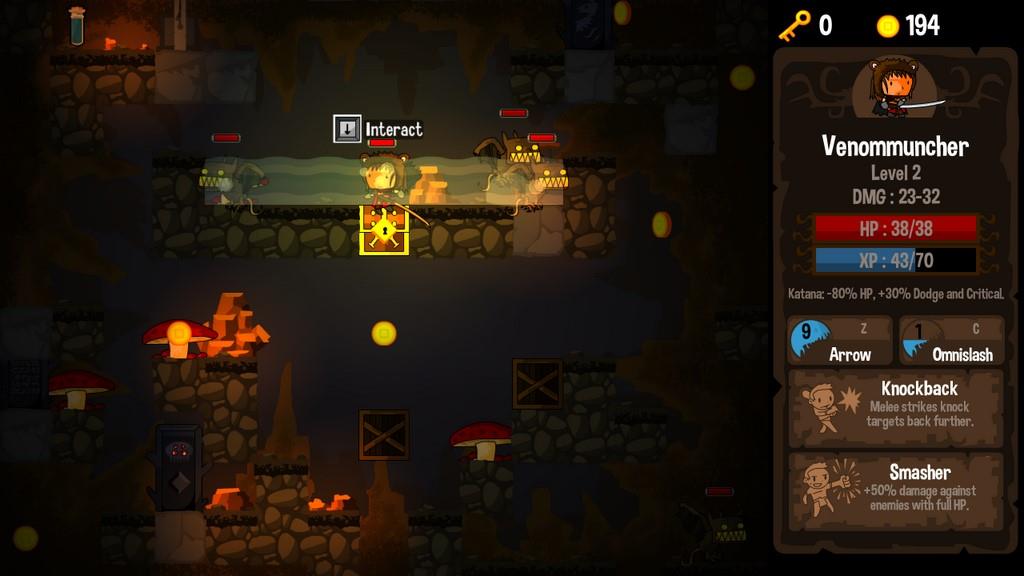 Written by Russell Archey on 5/28/2014 for PC
More On: Vertical Drop Heroes HD

Just recently I reviewed Life Goes On, an interesting puzzle game where dying is necessary to complete almost most of the puzzles and progress through the game. I mentioned in the review that it was, to my knowledge, the only game I’ve played in which dying is a necessity to complete the game, or at least provides an advantage. Well, that didn’t last long it seems, as I recently got the chance to check out Vertical Drop Heroes, a game in which you will likely die, but any upgrades and such that you’ve received are carried over to your next attempt.

Legends tell of a brave hero that will enter a portal at the Temple of Knowledge and traverse across dangerous lands in search of the Holy Sanctuary that holds a great secret to existence. Well, that’s how the prophecy goes anyway. The problem with prophecies is that everyone thinks they’re about them, so everyone is seeking out the Holy Sanctuary. Vertical Drop Heroes is the story of those brave souls who, unfortunately, meet with an untimely death—and the one hero that actually makes it.

Vertical Drop Heroes works with a simple premise: get through 10 levels to the Holy Sanctuary. When you begin you can choose from one of three different heroes, each with their own weapons, abilities, and stats. Once you choose your hero you enter the Temple of Knowledge which is kind of like your starting point for your adventure. Take a few minutes to look around and talk to everyone. There’s a really good chance you’ll be back. Often. Once you’re ready head on into the portal to begin your adventure. Chances are that adventure will be really short lived.

Each stage is vertical (hence the title of the game) and the goal is to reach the end and defeat the boss, though the boss can be avoided altogether if you have enough keys. As you progress, each stage you’ll be tasked with defeating enemies, finding gold and gems, collecting keys to open chests and cages (the latter containing non-player characters that can help you out), and even completing the occasional side quest for gold and experience. You’ll also come across shrines that you can activate for various effects, such as generating enemies in exchange for gems, experience, or keys, or can even fire off weapons like fireballs and ice bolts. 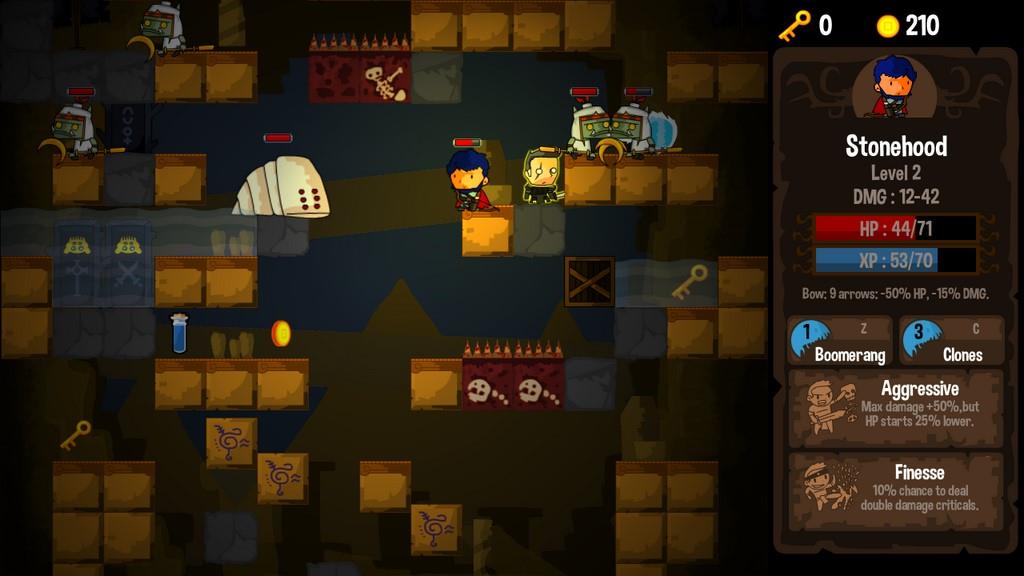 All of that sounds simple enough, right? So why am I making a big deal about your adventure being short lived and that you’ll be going back to the temple often? Well, that’s where the main premise of the game comes into play. The first level isn’t incredibly difficult, which is fine as it eases you into the game. The next level though starts to see a bit of an increase in difficulty to the point that unless you defeated every possible enemy in level one, you stand a good chance of dying, which means you have to start all over. Almost. After you die you go back to the character select screen with three more randomly generated characters to choose from, but now you’ll notice something different. First off you’ll notice that all of your gold remains intact, minus five gold for having to reroll new characters (there has to be a penalty somewhere). Second, during each stage you might come across someone who will give you new abilities for future heroes in exchange for gold. Each character has two ability slots and these will be filled with the abilities you purchase. 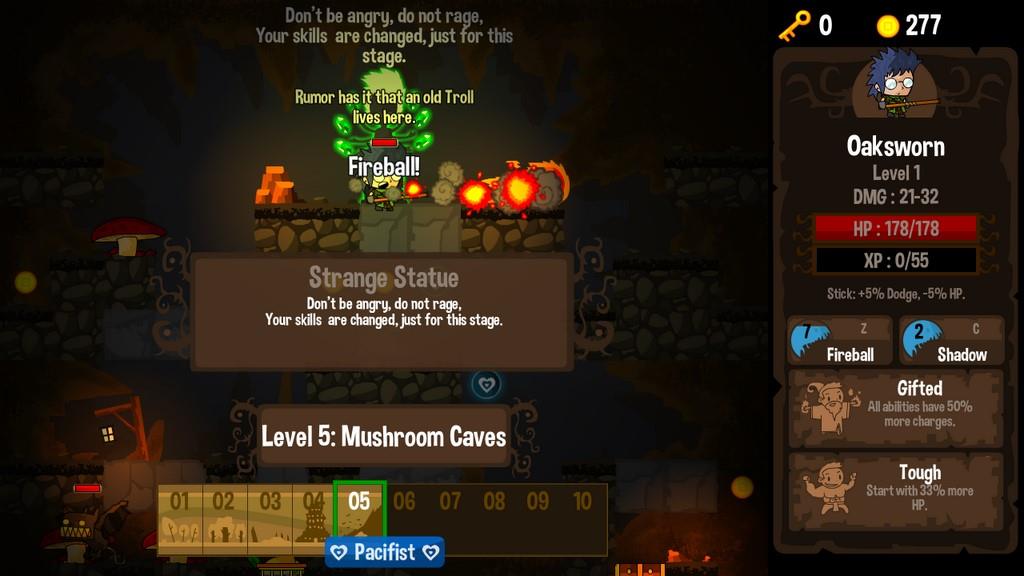 Okay, so you’ve died several times, bought some new abilities, increased your starting damage and hit points and are ready to set out again. Now the game begins to get fun as you’ll notice that you can take out enemies a lot quicker and easier than before. With your newfound abilities and skills you can now progress further along the way to the Holy Sanctuary. However, things will keep getting tougher as you progress, but starting in level two a new shrine makes itself available: the ability to teleport directly to a level. This can be both a good thing and a bad thing. The good thing is that it allows you to skip previously cleared levels. The bad thing is that not only does it cost a lot of gold to activate (though to use it in the temple is incredibly cheap at first), you don’t retain the exact experience level you had when you activated it. For example, when I first activated the level eight teleportation shrine I was around experience level 32. When I died and decided to skip right back to level eight I actually started at experience level 22. I’m not exactly sure of how the game determines what experience level you start with, but it does put you at a disadvantage.

The graphics are nice, the music fits the atmosphere of the stages, and the progression of the game with the new abilities was really enjoyable. There are a couple small things that bothered me though, but I didn’t feel like they were enough to warrant several paragraphs explaining them. First is that once you gain a lot of abilities, the final stage (the sanctuary itself) is rather simple to finish. There’s an ability called Ice Age which pelts the area in giant ice balls and freezes everything they hit for a few moments. You get four uses of that per level, but it pretty much makes the final stage a non-issue. 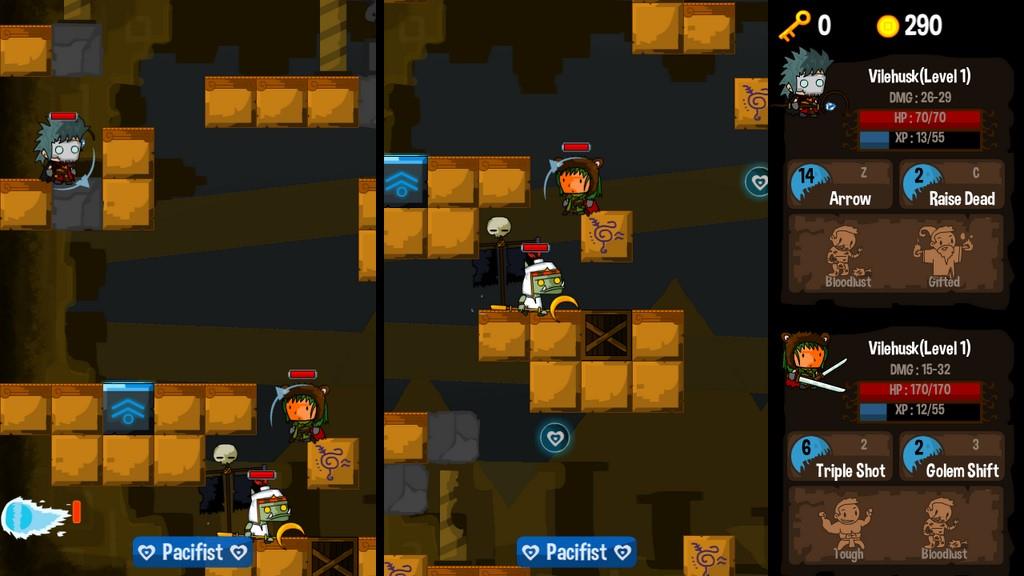 The other thing that sometimes gets to me is that while you’re gaining new abilities and increasing the starting stats for new heroes each time you die, get used to the first couple of stages as you’ll be seeing them a lot.  The attacking can definitely seem a bit annoying, mainly because while you can swing your weapon you can also just walk up to them and hit them, similar to the arcade game Gauntlet. That’s actually a more reliable way to hit an enemy using melee weapons because it just felt like the weapon wouldn’t hit an enemy’s hit box when manually swinging with it. This led to me dying a lot in the first couple of stages while I got my stats up. For a while I was really getting tired of them.

In the end though, Vertical Drop Heroes is a really solid game. It’s one of those games that’s challenging at first, but as you keep dying you get opportunities to better your chances for the next try. The final area was kind of surprising and unexpected, though again it can be a little on the easy side with the right abilities. There’s also some replayability as once you clear the main game you can unlock new game+ which is an endless game where you shoot for a high score. You can also play with a friend either split screen or over a local network. It works the same way, except experience shrines (where you summon enemies and gain experience for it) only give experience to whoever activated it, and once you die you have to wait for your friend to either die or complete the level (in other words, when you die you’re done for that level). On the whole this is a pretty fun game. If you’re looking for something simple, definitely give it a go.

Vertical Drop Heroes is a really solid game. While there are a couple of things I could (and did) nitpick, I thoroughly enjoyed my time with it. If you're looking for a fun and slightly different type of RPG that you can easily play in spurts, definitely give this one a go.