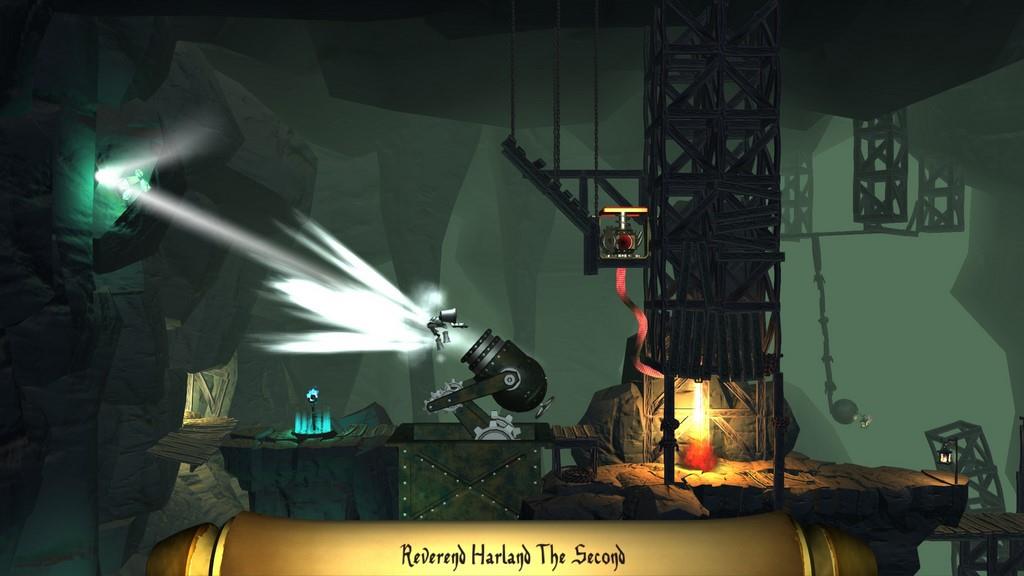 Whenever you need a hand, you can always count on your family.  No matter how much trouble you’re in, no matter how much your back is against the wall, you family will always be there for you.  What better way to repay them than to…sacrifice them?  Yeah, that’s the premise in Life Goes On.  Basically you have to get from the start of each stage to a golden trophy.  Sometimes it’s way off in the distance, sometimes it’s right next to you but a flame thrower is between you and your prize.  Let’s sacrifice our lives…many, many, many times over and check out Life Goes On.

As stated, the premise is rather simple.  All you have to do is get from the start of the stage and touch the golden trophy at the end as quickly as possible.  In the process you have to…um, not avoid obstacles such as spikes, flamethrowers, ice block makers, and pits.  That’s basically it; there’s really no story to the game from what I can tell outside of that apparently Jim, the “main character” so to speak, has an incredibly extended family.  So extended that one of the achievements you can get is called Milicide which is obtained by killing off a total of 1,000 knights over the course of your playthroughs.  Stupidly I basically got most of that out of the way in a ten minute killing spree and never paid attention to the names of the knights I was killing off, but for them to come up with a good 900 names at least (I had already died quite a bit at the point I did this) is pretty impressive.  With that said, let’s take a look at what I did and didn’t enjoy about this game.

What Bothered Me:
I’m going to start with what bothered me because honestly there wasn’t much that did.  For starters, the difficulty really isn’t that bad.  Obviously the first several stages are rather simple to ease you into the game before throwing other mechanics at you (yes, I consider dying a mechanic in this game), but even when I got to the final area the stages weren’t all that terrible and most of the time I had them done within a couple of minutes.  There are a few frustrating stages that took quite a bit longer, but for the most part once I looked at the puzzle for a few moments I had an idea in my head.  Plus if you aren’t going for a top time you can just get to a checkpoint and wait to see what you should do next.  In other words, there’s really no rush and the puzzles aren’t all that hard.

That leads to my next issue: the length of the game itself.  At just over fifty stages and given that most of the stages aren’t that difficult if you stop for a few moments and think about them, a decent player should be able to finish the game in around three to four hours, and that’s provided they’re not going for achievements or medals in the stages.  Now that’s not to say that a short game is necessarily bad.  My first time through Portal took me roughly three and a half hours with very little help from a friend and I love Portal.  As such I do like Life Goes On, but I’m worried that some people might be put off by how short the game is if they’re just looking to finish each stage.

Finally, we have the music.  The music is okay and it does fit the theme of the game.  However, it’s basically the same couple of mellow-sounding tracks over and over again, which is fine except that after a song finishes there’s a five to ten second gap before it starts back up again.  Granted this is a very minor nitpick on my end and more for the gap than the music itself.  Then again if you don’t like the music you can always turn it off, start up your media player of choice and rock out while you kill some knights.

What I Liked:
In terms of what I did like, let’s just start with the concept as a whole.  In most other games…in fact I can’t think of another game where this isn’t the case…dying brings forth a penalty of some sort, typically going back to your last save point or even back to the start of a stage.  Progress can be wiped out, items found must be re-found, and all of those puzzles you completed…well, I hope you remember how you solved them.  Here however it’s the exact opposite; dying is the only way to progress, and typically in some ingenious fashion such as impaling yourself on a spike, falling down a pit, or even turning yourself into a giant block of ice to use as a platform.  It’s a unique concept that the developers made work.

I mentioned earlier that the length of the game isn’t necessarily a bad thing unless you’re just trying to blow through the game without doing anything else.  For everyone else there are achievements and medals to go after.  The achievements are self-explanatory; a lot of Steam games have them.  As for the medals there are three in each stage: time, lives, and Jeff.  The first two are, once again, self-explanatory; finish the stage fast enough or with a minimal number of lives to get either a purple or gold medal…and strangely purple is better than gold in this game.  As for Jeff, he’s a little rock monster that appears in each stage (sometimes hidden).  All you have to do is find him and let him eat you to get this medal.  Sometimes he’s right in the open, other times he’s kind of out of the way to the point you might have to redo your progress thus far in the stage. 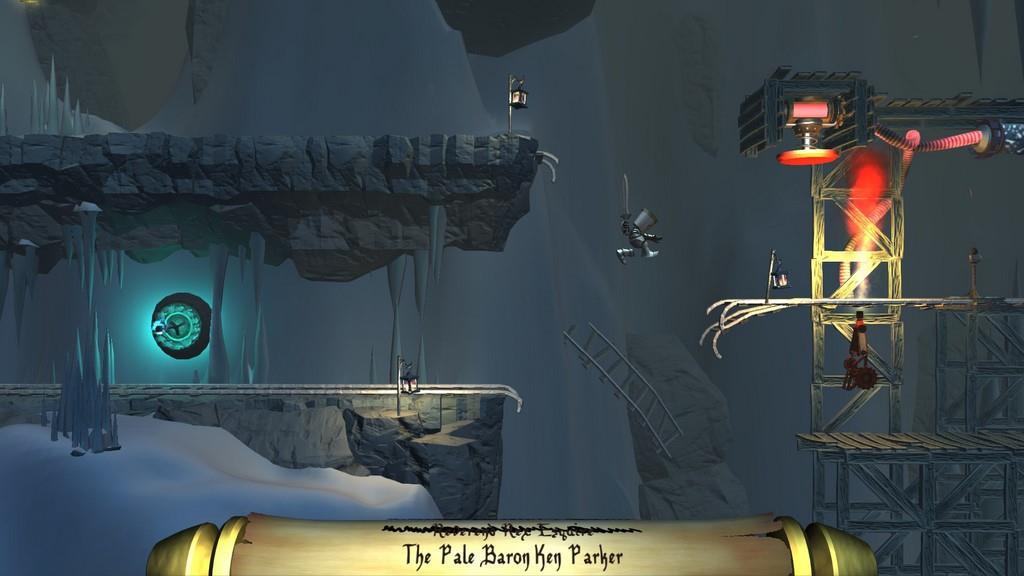 As for the other mechanics, these get introduced as time goes on.  Things such as gravity shafts, electrocution pods, and even devices that stay powered on so long as you’re alive get introduced by puzzles that are incredibly easy to solve, but they ease you into the mechanic so you can see how they work before they throw you into more difficult puzzles.  They’re implemented well enough, but again the puzzles are a little on the easy side, so it could have been a bit better there.  Still, seeing these mechanics in action was fun and pretty intuitive.

Finally comes the replay value, and here it can be pretty high.  On my first playthrough I didn’t replay too many stages, only those I felt I could improve my time right there and then, if I was getting a quick achievement (such as killing off enough knights to get to 1,000), or if I missed Jeff the first time around and knew how to easily get to him.  Other than that I just finished a stage and went to the next.  If you want to get every medal, and thus every achievement, you will be playing for a while.  Getting a time faster than the suggested time or staying under the suggested number of deaths will earn you at least a gold medal.  Getting a really stat on either of those will get you a purple medal.  To get every achievement you’ll have to ultimately get all purple medals and find Jeff in every stage.  Plus there’s another achievement where you have to beat the developers’ time for the game, from start to finish non-stop.  While I haven’t obtained that yet (nowhere near it in fact), everything I’ve read seems to suggest it’s anywhere between 31.5 and 33 minutes.  Not impossible, but it’ll keep you busy for quite a while, so the game has a lot of replayability.

Final Thoughts
Overall I enjoyed my time with Life Goes On and will definitely revisit it from time to time to get some of the medals I’m missing.  There’s some decent humor in the game and, while I won’t spoil it here, the end credits of all things was done rather well.  While the visuals are great and the game’s mechanics are fun to play around with, I’m worried that the more hardcore gamers won’t find this game too challenging.  If you’re just looking to blow through all 50+ stages one after the other, it’s not that challenging at all and might not be worth $13.  However, if you’re a gamer who likes to think outside of the box when solving puzzles and likes the challenge of constantly bettering yourself in each stage, you’ll get a lot more enjoyment out of this one as there’s a lot of replay-ability, even if the challenge isn’t quite there at first and the music kind of gets old after a while.  If you’re into puzzle games that aren’t your typical puzzle game, definitely give this one a shot.

Life Goes On is an ingenious puzzle game that puts a whole new spin on dying in video games.  Sadly its’ biggest downfall is the fact that the game is on the short and easy side, but if you’re trying to get every achievement and medal in the game, you can squeeze out a few more hours from this one.  If you don’t mind all of that, I definitely recommend picking this one up.