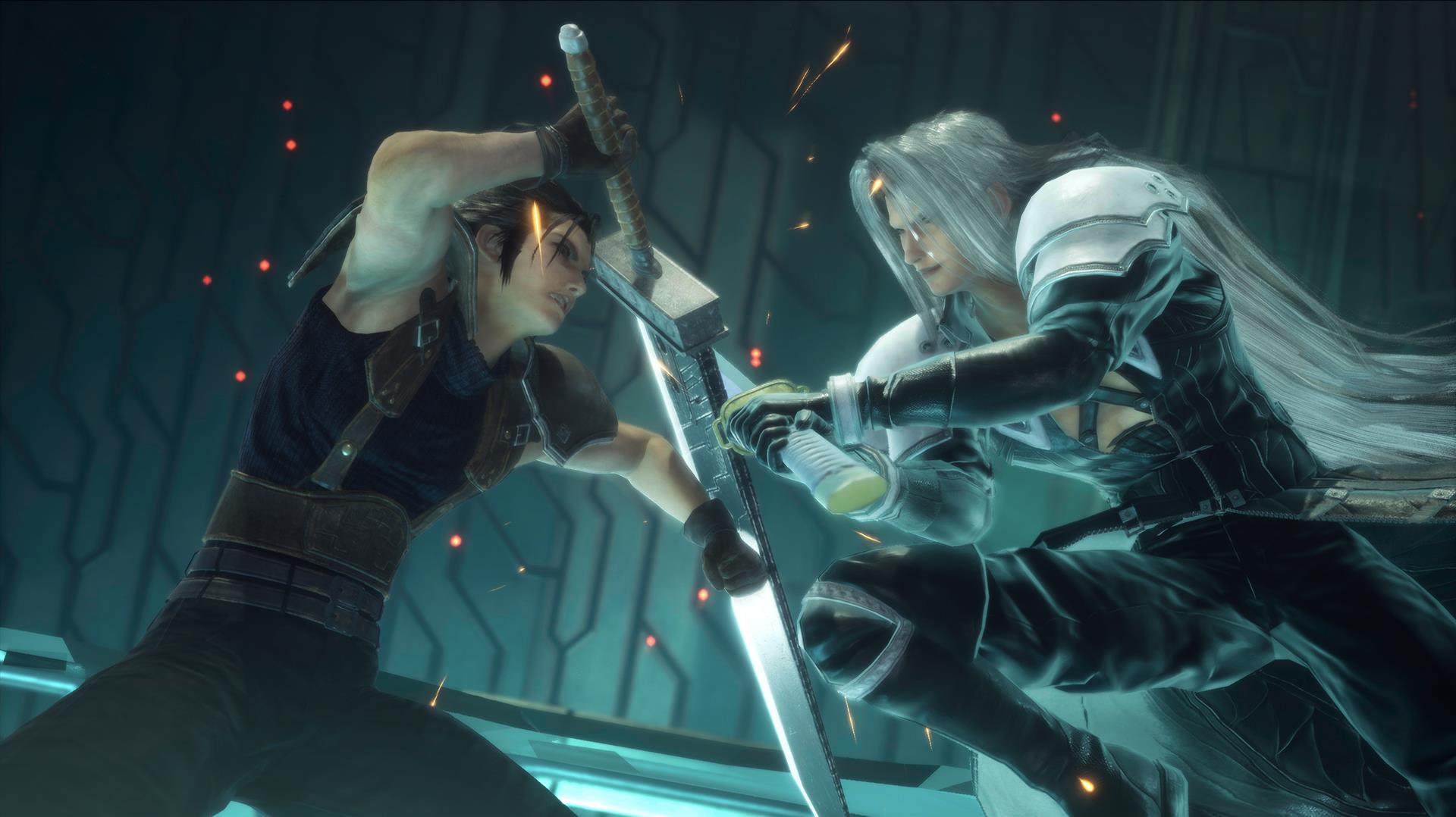 Not many people know this, but I wasn’t allowed to play video games when I was a little kid, nor did I receive any allowance to attempt to buy them on my own. I remember saving enough money from red envelopes given to me by relatives and family friends to sneakily purchase a brand new PlayStation Portable just to play Crisis Core: Final Fantasy VII. Playing for hours on end under the covers after my parents went to bed will forever be a fond memory that I hold very dear to my heart. So when Square Enix announced earlier this year that one of my favorite games of all time was getting a modern remaster, I could barely sit still from all my excitement and awe. It’s been a decade and a half since the world has been able to experience a forgotten yet pivotal part of the Final Fantasy VII universe: the story of Zack.

It’s sort of difficult to review a title like this, because Crisis Core: Final Fantasy VII Reunion is a bit more complex than just a simple remaster, but not enough to call a full on remake. If judged as a brand new standalone release by today’s modern standards, Reunion would probably be considered average at best, due to outdated game design and mechanics. This game was developed for “gaming on the go”, as it was exclusive to the PlayStation Portable. It utilizes short and repetitious mission design with excessive reuse of assets and environments. As such, it would be a tad bit unfair to take points off in this regard considering it’s a faithful re-creation of the 2007 version of the game and not trying to introduce anything new. On the other hand, Square Enix and Tose have actually raised the standards for future remasters. Crisis Core: Final Fantasy VII Reunion is an outstanding showcase of what a remaster should be, with beautifully overhauled visuals, improved combat mechanics, a fully voice acted cast, and a newly arranged soundtrack. 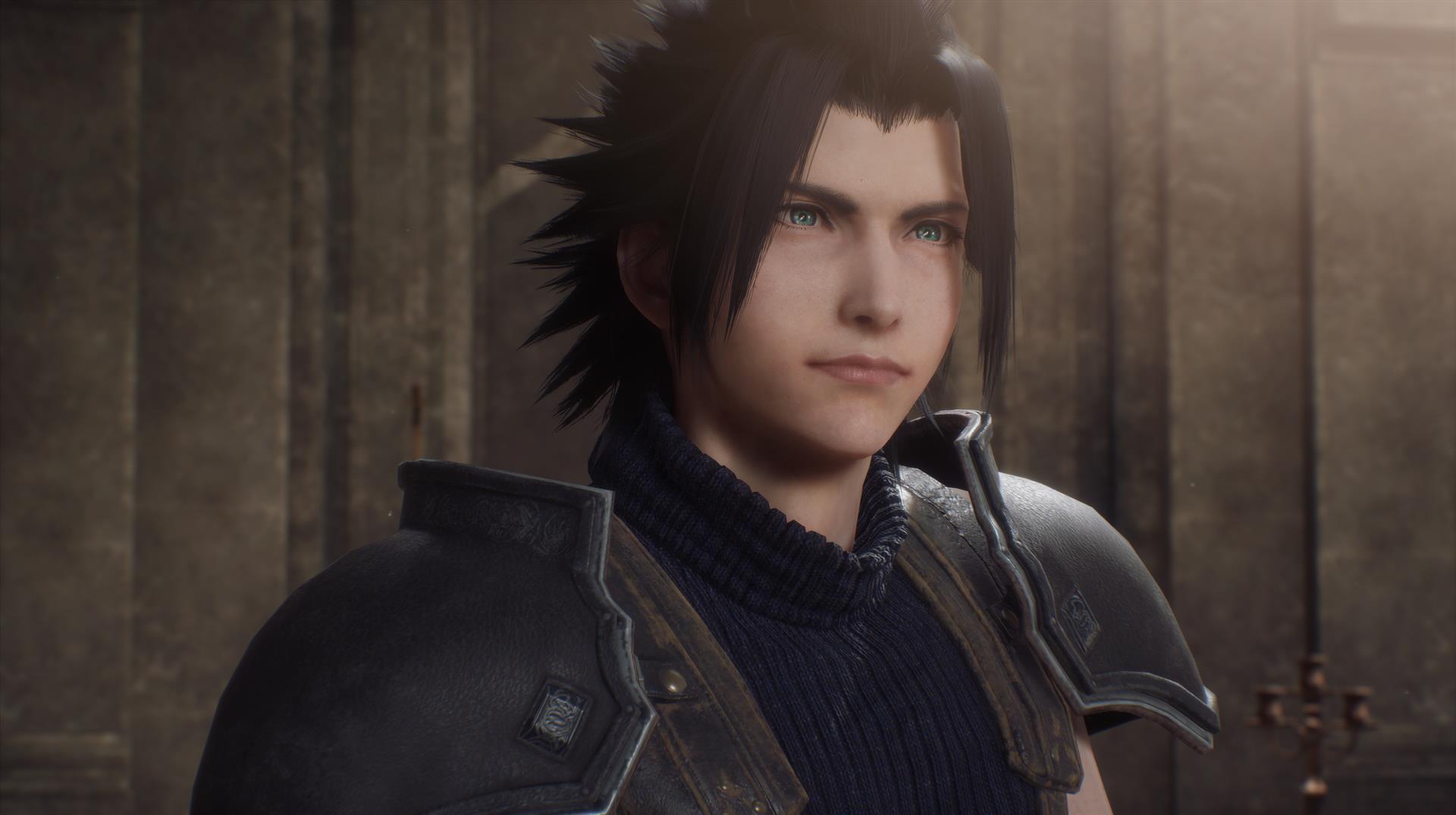 Crisis Core serves as the prequel chapter to Final Fantasy VII, and tells the journey of Zack Fair, a cheerful Shinra operative aspiring to become Soldier First Class. That name might sound familiar to you, but his character is actually absent from the narrative of the main game. Even then, he proves to be one of the most important and influential characters of the series, as he plays directly into the developments and motivations of Cloud and many other noteworthy people. Crisis Core also humanizes Sephiroth by establishing his own personal struggles and relationships with friends. Zack is truly a remarkable protagonist that may very well top the list of my favorite characters from Final Fantasy, even though it did take me some time to get used to the new actor who voices him. I really miss Rick Gomez’s version of: “Boy oh boy, the price of freedom is steep.” Regardless, Kazushige Nojima and Sachie Hirano have written an endearing story about dreams and honor filled with complex twists and turns that had me in tears at the end of it all.

As previously mentioned, Reunion is a faithful re-creation of the original Crisis Core, unlike Final Fantasy VII Remake. The entire narrative has been left unchanged, so those who have played the game before shouldn’t expect anything new or surprising. It was a bit lazy on the developer’s end to reuse the same CGI cutscenes that were used in the 2007 version, even though they still hold up very well. The in-game cutscenes, in addition to completely reworked Summon animations, show impressively detailed and flashy visuals and effects. I know a lot of fans were confused and maybe even upset about the voice over changes, because they could have just used the original ones in Reunion. But the actual reason for this is because the game is now fully voice acted, whereas Crisis Core only voiced pivotal scenes. The new voices are also in line with the voice cast from Final Fantasy VII Remake, so it makes more sense they went with this approach. But hey, if you can’t get used to the new English voice-cast, you could always switch it to Japanese! 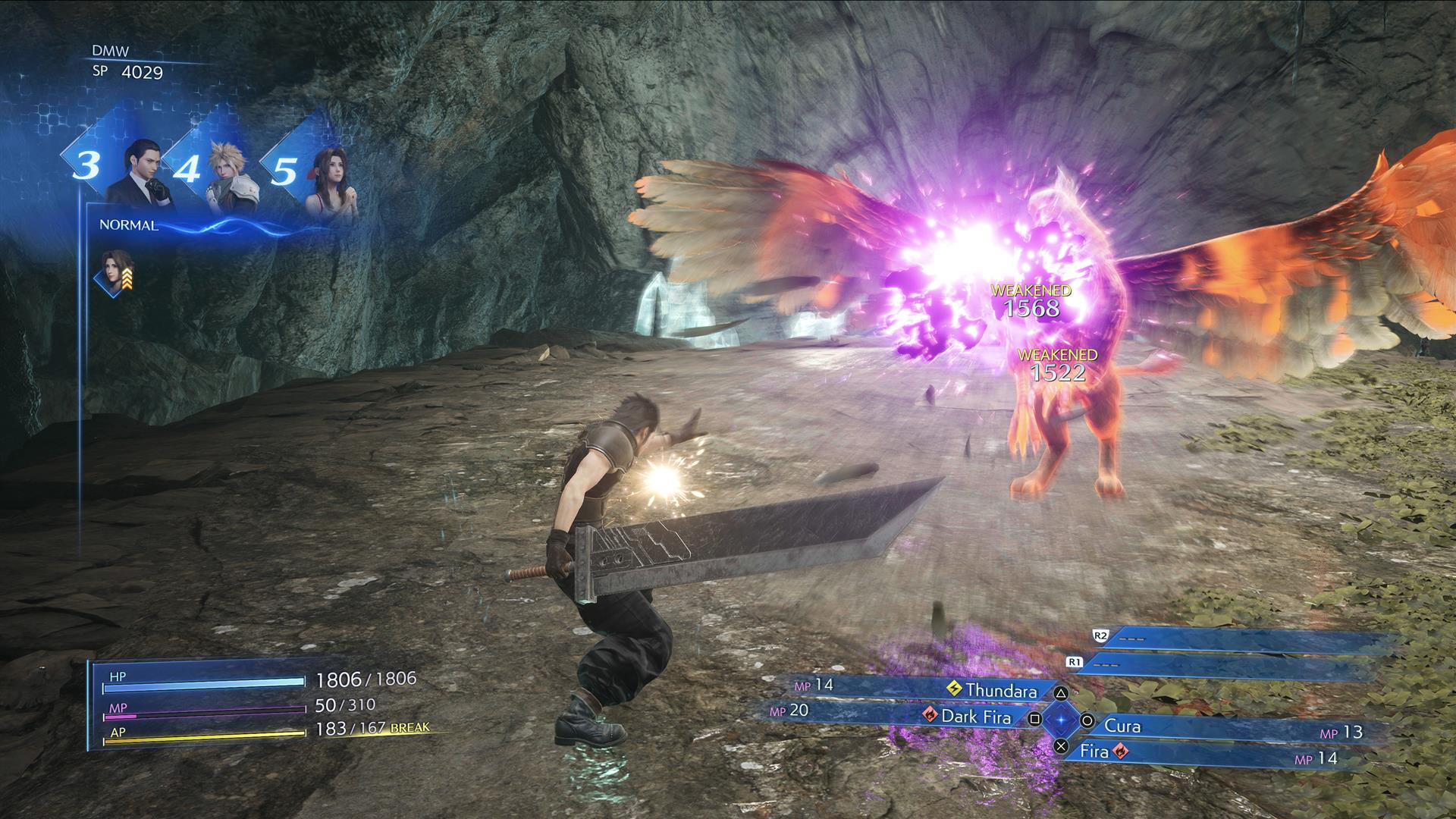 Reunion’s gameplay will immediately remind you that this game was designed for the PlayStation Portable. Gameplay is chapter-based, and filled with short optional missions that have you running down the same reused environments over and over again. Enemies are also not visible on the screen, so expect random pop ups of combat encounters like you would expect in a classic Pokemon game. I stuck with hugging the walls of a dungeon so as to not be ganked by random groups of enemies for the umpteenth time. Hearing the same automated voice saying “Activating Combat Mode” and “Conflict Resolved” can get irritating after a while as well. Immersion is undoubtedly broken as you might encounter situations where you walk a couple steps just for a cutscene to play. This is not to say that key story moments are not impactful or enjoyable, but more so a comment on the outdated game design for a 15 year old handheld game. I very much enjoyed the random mini-games and puzzles that provided a nice change of pace from the constant battling.

If you played the recently released remake of Final Fantasy VII, then the opening sequence of Reunion will look very familiar. The entire UI, menu, and HUD have been overhauled to take on the exact same blue tinted look of Remake. Even the newly improved combat system seems to play out as a blend of the original Crisis Core and VII Remake. Sound effects are crisper and much more impactful. You have your basic attack with your sword slash, in addition to an MP bar for magic and AP bar for enhanced physical attacks. The concept of Materia makes a return as well, and a complex Fusion system allows for many hours of build crafting and enhancing. Item shops and many Summons are unlocked through completing optional missions that are accessed at a save point. The developers have added some nice quality of life improvements to combat, including a new retry option if you die in battle and the ability to interrupt an enemy’s super attack, represented by a meter. The love and care put into refining these small details go a long way in the enjoyment of this title. 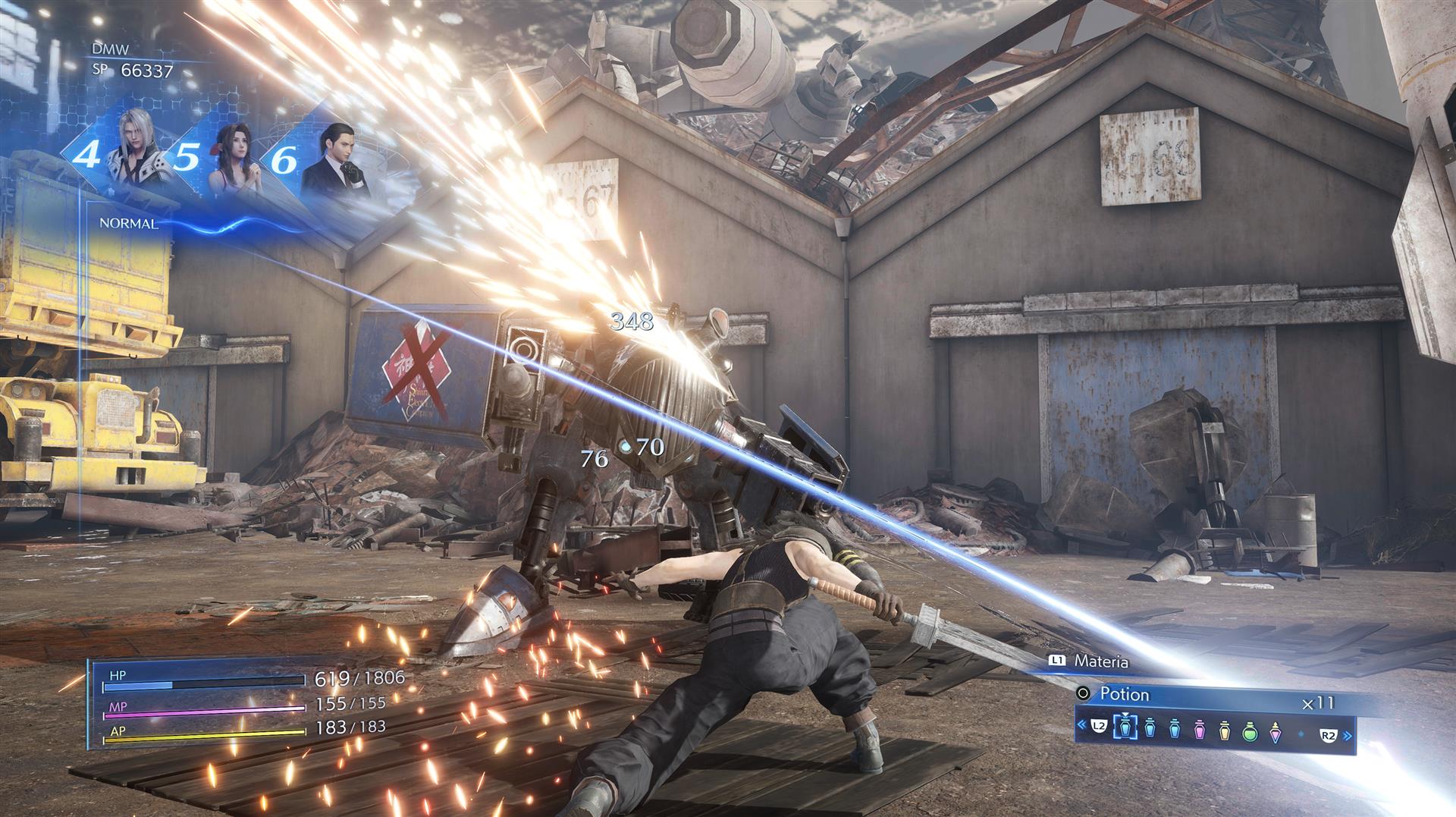 Alright: let’s address the elephant in the room, which is the slot machine thingy on the top left hand corner of the screen, known as the DMW, or Digital Mind Wave. You might notice you earn a currency known as SP after each battle encounter. This is what is used to spin the roulette during combat. Don’t worry, you’ll eventually be drowning in SP. You receive different buffs, Limit Breaks, and Summons depending what numbers and character images it lands on, which introduces a concept of randomness into gameplay. The probability the reel will land on a particular character increases as you develop your relationship with them. A main area of criticism during this game’s initial release was that leveling up was tied to the DMW, which leaves progression out of your control. Reunion, being the faithful remake that it is, does the same, although your level generally matches on pace with the narrative.

The effort put into this remaster, from the completely rehauled visuals to the enhanced soundtrack, do not go unnoticed. The blocky and blurry visuals on the PlayStation Portable are now on-par with the ones seen in Final Fantasy VII Remake, crisp and detailed. Some of the lip syncing animations are still a bit stiff and awkward though. Composer Takeharu Ishimoto is back once again and hearing some of Nobuo Uematsu’s works is always a treat as well. An emotive orchestral score along with memorable songs such as Why by Ayaka make an emotional return. Performance on the PlayStation 5 is flawless, with ultra fast loading times and running at 4K60FPS, compared to the 30FPS on the PSP. 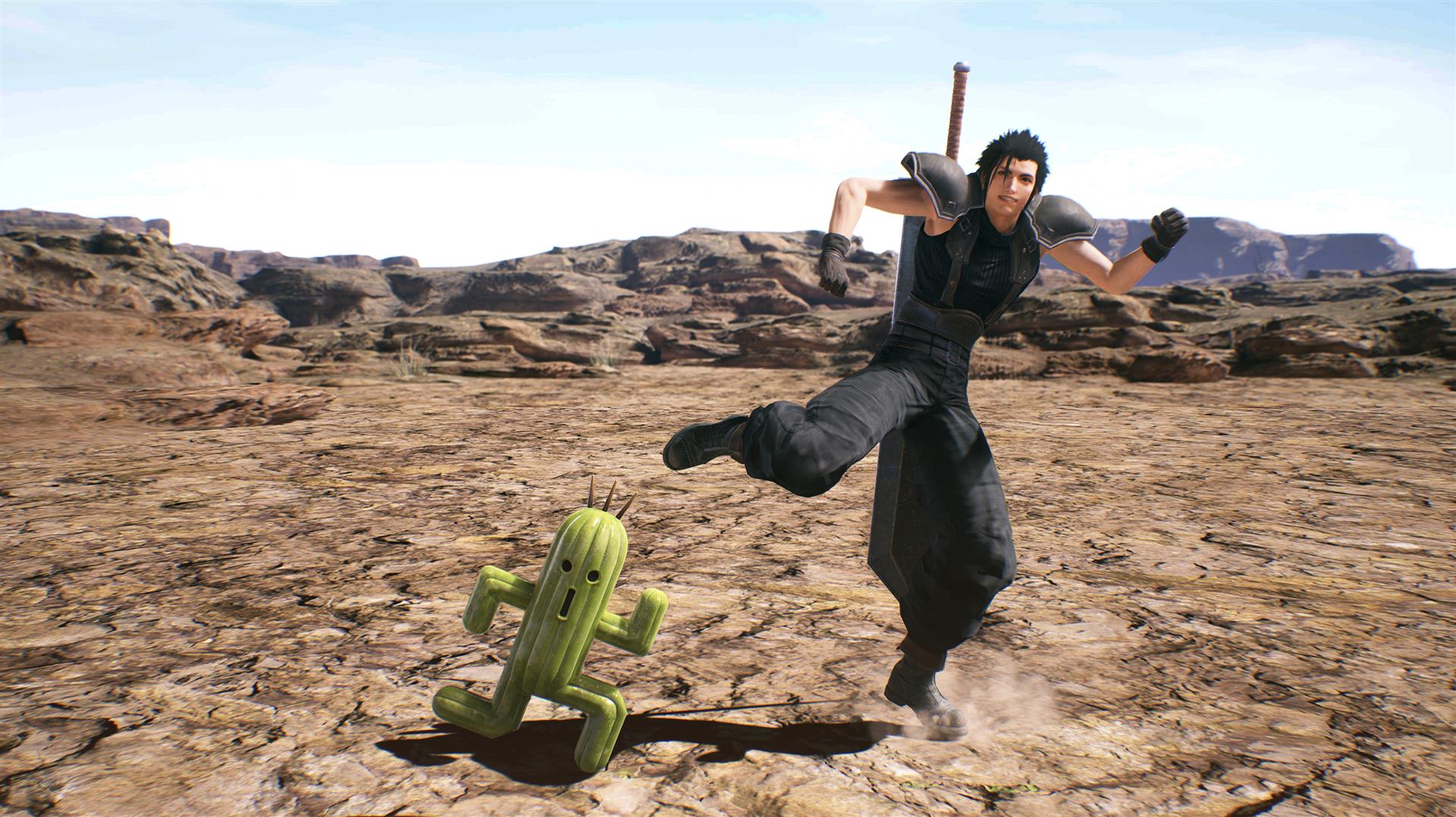 If you somehow missed this game’s original release back in 2007, then Crisis Core: Final Fantasy VII Reunion is the definitive way to enjoy a forgotten chapter of the Final Fantasy VII universe. There’s not much else to ask for in a remaster when Square Enix and Tose have provided drastically improved graphics, combat mechanics, and a fully voice acted game, among countless quality of life improvements. This is the perfect game to keep you busy until Final Fantasy VII Rebirth.

I’ll never forget my first playthrough of Crisis Core back in 2007 and I’ll also never forget my Reunion with it in 2022. Crisis Core: Final Fantasy VII Reunion is a triumphant example from both Square Enix and Tose of how an excellent remaster should look. If you can look past some outdated game design choices and see this as a faithful recreation instead, then you can truly appreciate what this game has to offer. This is a must-play for any fan of the Final Fantasy VII universe.