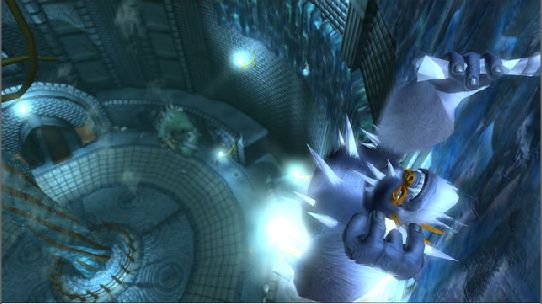 To say that Kaemo: Elements of power has a long history would be an understatement.  Originally slated to come out for the Gamecube the purchase of developer Rare by Microsoft seemed to indicate that the game would be powered by the big green X of the original Xbox.  Instead the title went under the scope knife again to re-emerge as one of the launch titles for the Xbox 360.

As with most games, the first level introduces you to the controls of the game as well as introducing to the plot of the game.  At the start of the game  you find yourself in the midst of a large scale assault on your home castle by the trolls who are attacking the castle to regain control of the Wotnot and the Elements of powers.  The Wotnot acts as a container for the elments and you need it to transform into the various elemental warriors.  Unfortunately you are not able to stop them and they manage to capture the entire royal family as well as some of the elements of power.  It turns out it was an inside job as you were betrayed by your jealous sister Kalus.  You recognize early on that she’s one of the bad guys early on because she’s the one with the most décolletage.  After being knocked out at the end of the first level you loss control of the elemental warriors you have.  It’s then up to you to regain control of all ten elements of power as well, rescue your family, and stop your sister and the trolls from enslaving you and the rest of your Elvin brethren.

Kameo is your basic adventure game with the twist that you get to transform into various characters to solve the various puzzles in the game.  Rare has created some fairly interesting characters for you to play with.   You have Chilla the yeti who can climb ice walls by creating pikes out of the icicles on its back.  Chilla can also through these icicles at enemies from a distance sniper style as well as being able to “store” trolls on her back by impaling them his back for later use.  These trolls can either be hurled at opponents or used as a club.  You also have Major Aran ….errr.Major Ruin a pillbug like creature who can curl up into a sphere and roll around the map knocking down enemies and slipping into pipes.  These two characters plus a fire snorting dragon, an animated pile of rocks, a weed with boxing glove, and four other interesting warriors are at your disposal over the course of the game.  In some cases you’ll have to actually use two or more of the characters to get through a section.  For example you might have to jump a over a gap using Major Ruin and then stick to a wall using Chilla’s spikes.  It’s a nice system but in some cases it does take a bit of trial and error to figure out what you are supposed to do as well as getting down the timing for switching warriors.

In order to use the warriors you have to reclaim them.  They are either held captive by in the shadow world by a demon or trapped within one of your kidnapped relatives. The game is a little linear in this regard as some of the puzzles require certain warriors to complete them.

As you progress through the game you can purchase or pickup Elemental Fruit which can be used to modify your elemental warriors.  These are usually adding new abilities, increasing the power of an existing ability, or increasing the spirit bar of the creature.  These are worth picking up as they can really change the way you play the warrior and are a nice touch in that you do have to choose what abilities you want to give you warriors.  A lot of the elemental fruit is hidden in out of the way places or are the rewards for completing the side quests which does give you come incentive for exploring the world.

Controls in Kameo are straight forward.  In typical third person fashion the left thumbstick moves you throughout the world while the right thumbstick controls the camera/perspective.  The left and right triggers control the warrior specific attacks and skills.  The face buttons are used to transform into Kameo (A) or any of the other warriors.  If you hold down the B,X, and Y buttons the screen will pop-up the “warrior wheel” which allows you to assign a warrior to that particular face button.  It’s a nice easy control scheme that most people will pick up fairly quickly.

For the most part the controls are rock solid and easy to use.  You do fight the camera from time to time but it only really happens when you are rolling through one of the pipes in the game or are backed up against a wall.  Where the controls fall apart is on the water missions where Rare strangely decided to invert the controls  I know this isn’t a problem for some people but this was really frustrating for me as you need to master them to beat one of the bosses in the game.   The problem is that when you fight this boss you have to fight him above and below the water so you have to switch back and forth which is a bit of a challenge.  The really frustrating part is that this could easily have been fixed with a checkbox that would allow you to not invert those controls.  It’s really a shame as the water levels are some of the most impressive in the game.

Kameo is easily one of the better looking titles at launch for the Xbox 360.  The folks at Rare did an excellent job of creating a very nice fantasy world.  You’ll get to explore everything from lush jungles to frozen tundra’s.  Textures are excellent and there’s a nice attention to detail.  The bosses in the game are well done, especially Queen Thyra who is a personal favorite.  Between having one of the cooler attacks in the game (she launces a lot of eyeballs at you) she had the most buildup in the game as she tracks you for the better part of one of the levels in the game.

The monsters in the game are well done and varied.  Besides the trolls there are several other little creatures that you will have to dispatch in the game.  The animations of all the characters are excellent and the game runs at a steady clip (even when there are hundreds of enemies on screen).  There are a couple of segments in the game where the folks at Rare are just showing off the graphical power of the system.  One such sequence has you plowing through the troll army on a horse.  This isn’t five or ten trolls but rather what seems like several hundred trolls who are trying to take out one of the Elvin outposts.

With the exception of the aforementioned water boss the gameplay in Kameo is challenging but not overly difficult.  The elemental warriors change the gameplay as you progress through the game but the folks are Rare are a little heavy on the Major Ruin sections while going light on others.  If you do get stuck during the game you can always consult the Wotnot in the game who will provide you some tips on how to solve a particular problem.  The book will tell you when it has something to say, which is something that can be a bit annoying at times.  There were a few occasions that the mind knew what to do but the fingers weren’t exactly able to communicate it to the 360 and the constant reminders were a bit annoying.

Most gamers will be able to play through the game in around ten hours or so (including the majority of the side quests).  Extra achievement points are available for those who play through the games co-op mode and those who max out the available points on each of the levels in the game.  I found that there were few warriors that I didn’t use as much as others, especially the ones you find at the end of the game.  The final battle of the game was a little bit of a let down, not because of the design of the game but by the fact that I wasn’t nearly as hard as I would have liked it to be.

Overall Kameo:Elements of Power is a bit more than you would expect from a launch title.  Besides solid graphics and audio there is actually a decent plot to the game and while there are a few tech demo sequences the game actually feels and plays well. Kameo was one of those games that will captivate you for long session and then frustrate the hell out of you but it’s certainly one of the better launch titles for the Xbox 360.

With the exception of one boss battle in the game and some camera issues Kameo is one of the better launch titles for the 360 and one of the few family friendly titles available for the platform. The game is at least a must-rent for all gamers and games with younger children will probably want to add the game to their permanent collection.