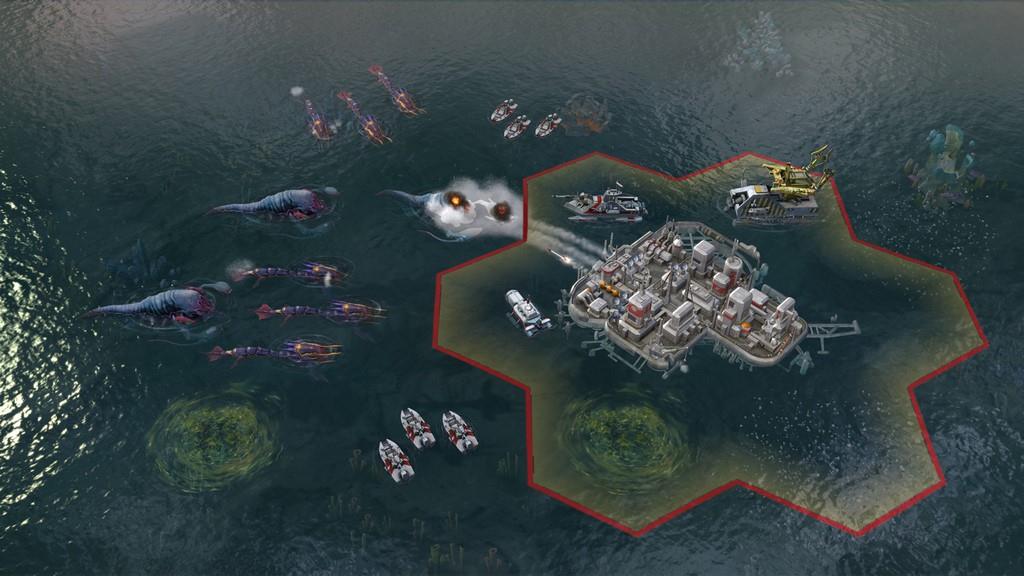 Written by Tom Bitterman on 10/8/2015 for PC
More On: Sid Meier's Civilization: Beyond Earth

The major addition iof Civilization: Beyond Earth – Rising Tide (CivBERT) is the ability to build cities on/in the water. At first they start as tentative coastal cities, but researching the right tech allows them to be built out in the open ocean. Of course, they do not stay there. Aquatic cities can move. The mechanic is similar to building a building: it takes a certain number of turns to move a city of a given size, modified by new techs. When a city moves, it grabs new territory. All hexes directly surrounding an aquative city come under that city's control. This can be especially useful early in the game for moving away from a suboptimal starting location and grabbing the prime real estate. It has another purpose – culture does not allow aquatic cities' borders to grow. The only way to add territory is to move. This adds some neat strategies: staying in one place limits territory gain while allowing resources to be put toward buildings and units, while moving around can serve as a form of territory grab at the expense of units to defend it.

This is not just a matter of grabbing good coastal hexes. The sea itself is now teaming with new resources and life. An entirely water-based civilization may not be advisable but there are enough resources in the sea to make it worthwhile for any side to have an aquatic city or two.

Along with new resources comes new units (go submarines!) and new creatures. The ocean fairly teems with life, much of which will ignore your Ultrasonic Fence. To this reviewer's dismay, particularly angry native life can now ignore the previously impermeable Utltrasonic Fence improvement and pillage your improvements. While this allows for native life to keep its importance later in the game, the random occurrence of “You have been eaten by a grue” is annoying.

The diplomatic system has seen an extensive overhaul as well. A new resource, Diplomatic Capital, can be earned and spent on agreements (or earned by accepting agreements). Diplomatic Capital can also be spent on “traits”, which are small bonuses to some faction-level ability (better health, for example) that allow the player to further customize their faction to fit their style of play. 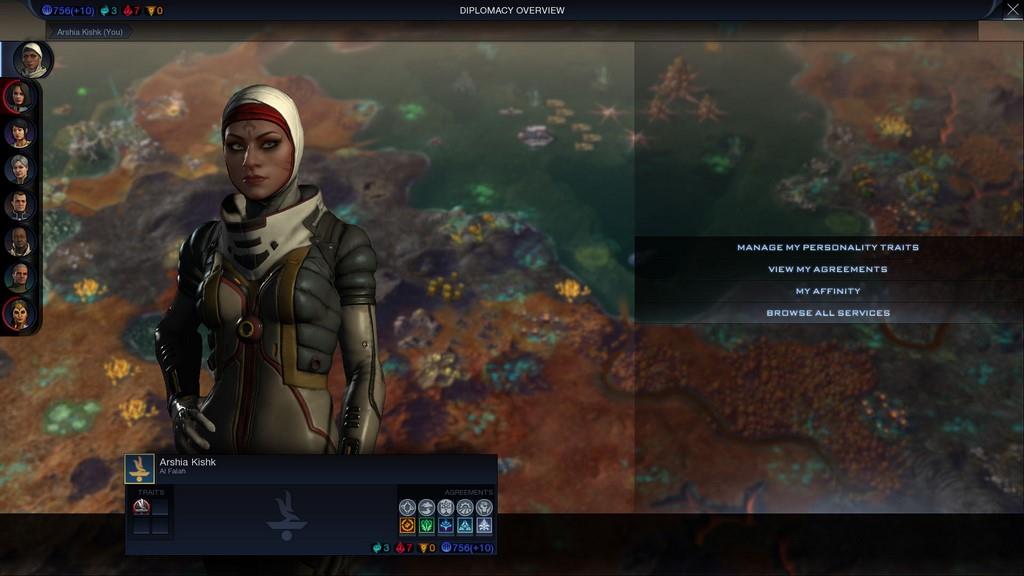 Overall, the diplomatic system is not a string point of the game, even after this overhaul. AIs are not particularly good at deciding what sorts of agreements to offer and accept. It has been almost impossible for this reviewer to get an AI to acccept any sort of deal, even when it is symmetric to a deal they had just previously offered. What has been improved is the transparency of the whole system (although it is more complex). AIs now display information on how much they Respect and Fear you. There are also popup messages during the game informing the player that a particular AI now respects you more because of some action you have taken, or property your faction has (for example, most advanced tech). While the AI still does not make particularly good or sensible decisions, at least it is easier to get a handle on how your faction is regarded in the world.

Affinities have received some attention as well. Previously there was little reason to make progress in anything other than one's primary Affinity. All the good bonuses were to be found at the top of the Affinity pyramid, so trying to level up in more than one wasted time and resources. In CivBERT there are new bonueses and units for “hybrid” Affinities. 7 Supremacy and 5 Purity now mean some new unit or bonus will be earned. While an interesting idea it remains to be seen if this was a good one. Part of the strategy of the Affinity subgame was that, while sticking to one Affinity was the most efficient, there was always some neat tech/unit/resource that could be accessed if you strayed for “just one tech” over into a different Affinity. With hybrid Affinity bonuses this tradeoff loses some of its force. Only time will tell what the new optimal Affinity strategy will be. 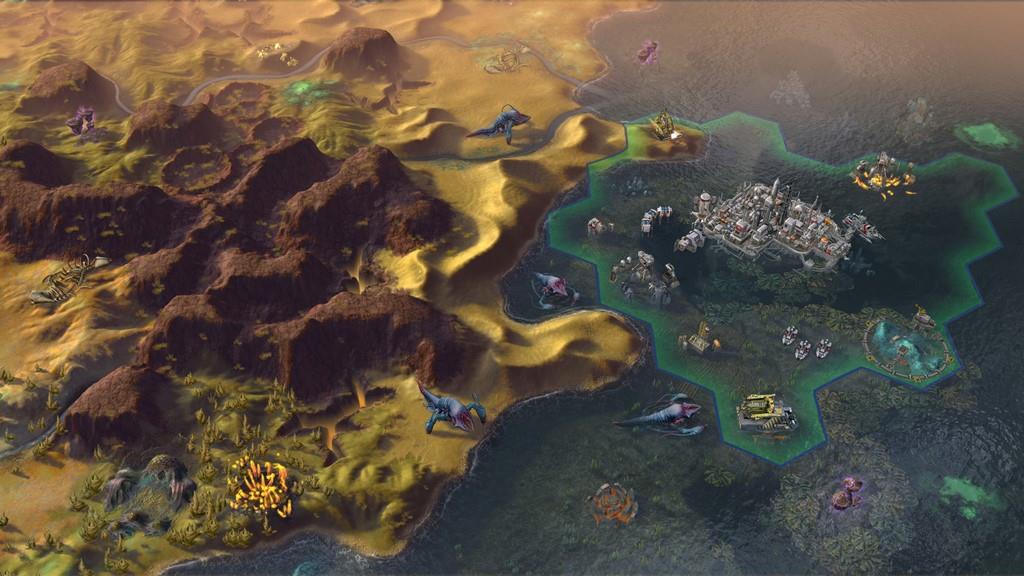 There were some additional, smaller changes. Explorer units can now find Artifacts. They come in different classes and states of repair, which have an effect on what happens when they are “traded in”. Trading in one Artifact provides a smaller bonus while trading in 3 of the same class provides a bigger bonus. This provides a bigger incentive to roam the world with Explorer units, especially if you can get there before your enemies.

A couple new factions have been added. Al Falah is a vaguely Middle Eastern outfit run by a woman in a head scarf and full-body skintight leather. The North Seas Alliance is based on England and Scandinavia, and is the best faction for those looking to explore the new sea-based mechanics. Neither is anything to write home about, but do not seem obviously broken.

In summary, “Civilization: Beyond Earth: Rising Tide” is a super-sized expansion with lots of changes and additions to its parent. The addition of aquatic cities with new monsters, units and resources, would be enough to justify a purchasse. Throw in the new Diplomatic Capital system, traits, hybrid Affinities, Artifacts, and the rest, and you have a super-sized expansion. Expect fans of the series to spend many hours trying out the different strategies these new mechanics enable.

Fans of CivBE will want to pick this one up. While nothing groundbreaking has been added, the new features flesh out some gameplay from the original, and add the new frontier of aquatic colonization. Perhaps a little heavy on the micromanagement, the overall pace of the game retains that “one more turn” quality.