by: Dan - posted: 8/4/2008 12:28:00 PM
More On: Braid
Braid is coming to XBLA this week, but the pricing was in some doubt. It was speculated at 1200 pts on a Japanese Xbox site, but later debunked by Microsoft in a follow up by Shacknews with MS stating that the pricing was incorrect.  Well guess what, it will be 1200 pts when it comes out Wednesday at 5:00 a.m. EST. So apparently Microsoft was just saying Castle Crashers wouldn't be 1800? Guess we'll find out in a couple weeks. 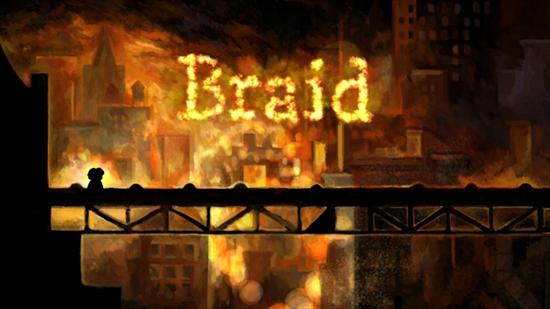 From acclaimed independent developer Jonathan Blow, “Braid” is an artful puzzle-platformer where challenging, yet accessible puzzles are solved by manipulating time. From your house in the city, journey to a series of worlds solving puzzles that will help you rescue an abducted princess. Time behaves differently in each world, and every puzzle shows you something different about the world. The time behaviors include rewinding, independent time streams, time that is tied to space, parallel realities, time dilation, and perhaps more.

Developed by Number None, Inc., and published by Microsoft, “Braid” will be available for 1200 Microsoft Points worldwide and is rated E 10+ for Everyone over the age of 10 by the ESRB.