by: Randy - posted: 4/22/2008 11:28:00 PM
More On: Persona 3
The Dark Hour is at hand -- and available now at your local retailer.  Persona 3: FES comes bundled with an enhanced version of last year's original Persona 3, all for the PS2-lovin' price of $29.99.  What I like is how developer Atlus keeps their sense of humor intact in the face of weighty competition:  "This is fantastic news for gamers as it means they'll have something to play during the otherwise boring and uneventful week of April 29th."  (If you don't know, you better ask somebody.) 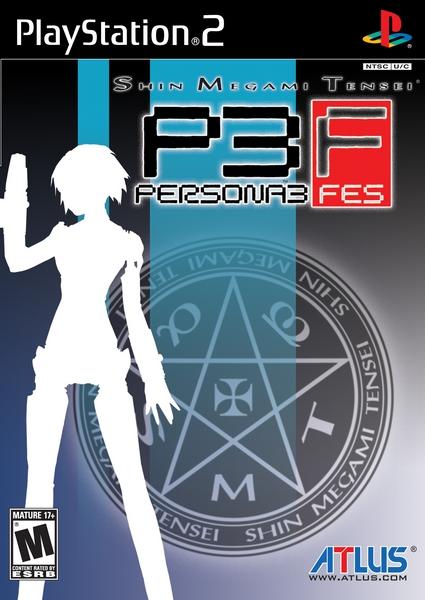 The Journey is Over. The Answer Awaits.

IRVINE, California - APRIL 22, 2008 - Atlus U.S.A., Inc. today announced
that Persona 3 FES for the PlayStation(R)2 computer entertainment system,
the highly anticipated definitive cut of 2007's RPG of the Year, is now
shipping to retailers across North America. This is fantastic news for
gamers as it means they'll have something to play during the otherwise
boring and uneventful week of April 29th.

Persona 3 FES has released to stunning acclaim. EGM gives it their Gold
Award, scoring the game three A's and exclaiming, "FES' arrival -- at a
budget price -- is the best thing to happen to role-playing games this
year." Play Magazine deals FES perfect marks, 10 out of 10, and says,
"Persona 3 FES is one of the best RPGs the PS2 has ever received, and one of
the console's proudest moments period." IGN grants their coveted Editor's
Choice Award, writing, "The fact that you're getting both the original and
its virtual sequel for thirty dollars is a steal that no PS2 RPG fan should
be without, and you're not likely to see such an excellent collection on the
system again."

With two games on one disc -- a brand new chapter featuring 30+ hours of
gameplay and an enhanced version of the original game loaded with new
content and features -- Persona 3 FES is the comprehensive version of one of
the most acclaimed RPGs of 2007. Persona 3 FES has an MSRP of $29.99.

For the official Box art and Logo:
http://www.atlus.com/assets/p3fescoreassets.zip

Please join the discussion of this new release in the official forums:
http://www.atlus.com/new_forum/viewforum.php?f=16

About Persona 3: FES
Lead a group of high school students with a dangerous extracurricular
activity: exploring the mysterious tower Tartarus and fighting the sinister
Shadows during the Dark Hour, a frozen span of time imperceptible to all but
a select few. However, the end of their quest is no longer the end of the
story -- witness for the first time the aftermath of the final battle and
the students' struggle to find meaning in their new lives.

Key Features:
- Acclaimed by critics and fans - Experience the definitive cut of 2007's
award-winning Persona 3, which garnered tons of critical acclaim and the
adulation of a devoted fanbase.
- More than just an expansion - Persona 3 FES contains an enhanced version
of the original game, loaded with new Personas and cutscenes, a weapon
synthesis system, additional quests and events, a hard difficulty mode, and
the ability to change your characters' clothes.
- 30 additional hours of gameplay - Take the role of Aigis in a brand new
Persona 3 episode that plays as a full game with an original story, extra
cutscenes and objectives, and seventeen new music tracks.
- Incredible value  - The enhanced version of the acclaimed Persona 3 game
and the brand new episode make for 120-plus hours of gameplay, packaged
together at a suggested retail price of $29.99.

Persona 3 FES is a stand-alone product and does not require the original
Persona 3 to play. However, players with save files from the original game
will be able to transfer some of their saved data, such as their Persona
compendium, to be used in the enhanced main story. The new story is
accessible from the start and does not require players to finish the
original game beforehand.

Persona 3 FES has been rated M for Mature with Blood, Language, Partial
Nudity, Suggestive Themes, and Violence by the ESRB.