by: Dan - posted: 4/14/2008 12:12:00 PM
More On: Xbox Live Arcade
Microsoft announced today that the XBLA exclusive Rocky & Bullwinkle, as well as the classic arcade game Battlezone will be hitting Xbox Live Arcade. Rocky & Bullwinkle appears to be a Party game, with over 100 micro games built in. It also features eight playable characters, five difficulty settings and 25 games that use the XBL Vision camera. Battlezone is an enhanced version of the original including multiplayer modes and support for the XBL Vision camera as well. Rocky & Bullwinkle (800 points) and Battlezone (400 points) will be available this Wednesday, April 16th at 4:00 a.m. EST. Check out all the details and screens after the jump: 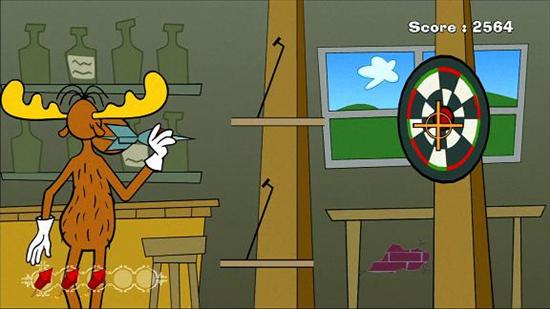 There’s a new addition to the family of party games available on Xbox 360! “Rocky and Bullwinkle” is available exclusively on Xbox LIVE Arcade, along with an enhanced version of the tank vs. tank action classic “Battlezone” this Wednesday, April 16, 2008 at 9:00 a.m. GMT (1:00 a.m. PDT).

Based on the popular cartoon series of the 1960s, “Rocky and Bullwinkle” on Xbox LIVE Arcade is a fast and fun party experience packed with more than 100 micro games. Eight playable characters from Frostbite Falls are back in the living room, including Rocky, Bullwinkle, Boris, Natasha, Dudley Do-Right and many more. “Rocky and Bullwinkle” features five difficulty settings, as well as support for up to 12 players in local hot-seat mode.

The game takes visual inspiration from the 1960s with a decidedly retro art style, but the fun is as modern as it gets. In fact, cool cats who want to get up and move will enjoy 25 micro games that work with the Xbox LIVE Vision Camera. By moving around and expressing gestures – like rowing a boat or throwing darts – players can control the action in the game!


“Battlezone” on Xbox LIVE Arcade adds exciting new multiplayer modes for up to two players both locally and over Xbox LIVE, including Deathmatch, Team Deathmatch and Capture the Flag. Plus, players can use the Xbox LIVE Vision Cam to challenge opponents on the battle field. Combine these features with new special effects for weapon firing, impacts and explosions and this revamped version of “Battlezone” is a must-have classic that fans and newcomers will enjoy.

To score points in “Battlezone,” players must shoot and destroy the enemy’s brigade including a standard enemy tank, supertank and a flying saucer.

Created by Atari, an enhanced version and the original version of “Battlezone” will be available worldwide (with the exception of Korea and Japan) for 400 Microsoft Points and is rated E for Everyone by the ESRB. For more details on “Battlezone” please visit: