Sonic on your iPod

by: Dan - posted: 12/19/2007 8:05:00 AM
More On: Sonic The Hedgehog
SEGA announced yesterday that Sonic the Hedgehog is now available for the Apple iPod nano with video, iPod Classic and the fifth generation iPod. I am interested in seeing how the controls work for this.  The game is the 1991 original title remastered specifically for the iPod and can be purchased from the iTunes store for $4.99. Check out the release after the jump for all the details: 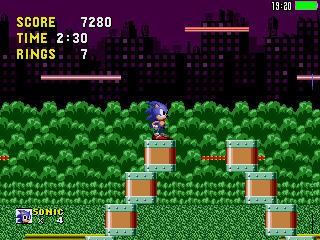 Sonic The Hedgehog Comes to the iPod

SAN FRANCISCO--SEGA of America, Inc. today announced that Sonic The Hedgehog is now available for play on the new iPod nano with video, the iPod classic and the fifth generation iPod. Sonic The Hedgehog was originally introduced in 1991 and has become one of the most popular video game franchises in history, selling well over 45 million copies. Sonic fans can purchase and download the game from the iTunes Store for $4.99 (www.itunes.com). Sonic has been designed specifically for the iPod and is available on the 22 iTunes Stores around the world.

“Sonic The Hedgehog is one of the most beloved video game characters of all time, ” said Simon Jeffery, President and COO of SEGA of America, “And with the installed base that iPod enjoys Sonic now becomes available to a whole new group of casual and hardcore gamers just in the time for the holidays.”

iTunes customers can buy the game for themselves, or easily give the gift of Sonic The Hedgehog. Similar to music and video content on the iTunes Store, customers simply find the game on iTunes and click the "Gift This Game" button.