XBLA gets Shrek and Roll and Screwjumper this week

by: Chuck - posted: 11/12/2007 12:07:00 PM
More On: Xbox Live Arcade
Microsoft is celebrating the 100th title on XBLA this week by releasing Shrek and Roll and Screwjumper to the service on Wednesday.  Both titles will set you back 800 points.  I guess I'd want to celebrate the 100th game with something more than a movie tie-in game, maybe something like Undertow but that's just me. 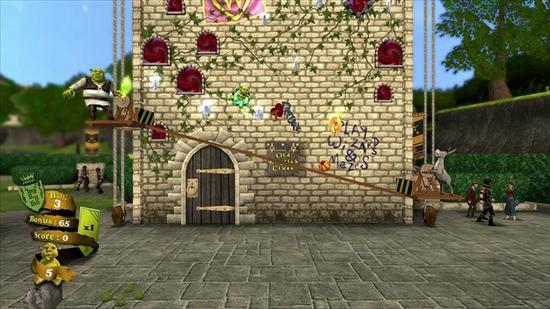 Join “Shrek®,” “Fiona,” “Donkey,” “Puss in Boots” and 20 other twisted fairy tale friends in “SHREK N ROLL,” a puzzle game designed for ogres of all ages on Xbox LIVE Arcade.

Navigate through 16 challenging mazes across four unique environments in Far Far Away’s newest competitive tournament. Test your tilting and rolling skills in Single Player mode, challenge others in Versus mode, or work together with friends and family in 2-player local Co-op mode. The game will be available worldwide with the exception of Korea and Japan this Wednesday at 9:00 a.m. GMT (2:00 a.m. PST) for 800 Microsoft Points, and is rated “E” (Everyone – Comic Mischief) by the ESRB.

Also this Wednesday, Xbox LIVE Arcade launches its 100th title with “Screwjumper!.” Published by THQ and developed by Frozen Codebase, players take the plunge in “Screwjumper!” and free-fall into the depths of a chaotic underworld, driving aliens back to their home world by destroying their precious mining equipment. The free-falling action takes place on four different planets and features a total of 20 mines.

“Screwjumper!” allows players to compete with friends locally via a split-screen mode, as well as over Xbox LIVE. The game will be available worldwide with the exception of Korea and Japan this Wednesday at 9:00 a.m. GMT (2:00 a.m. PST) for 800 Microsoft Points and is rated “E 10+” by the ESRB.