I played so much Disney Dreamlight Valley when it first appeared in Early Access that - even though it dropped in September - it became most most-played game of 2022. I burned through all of the content included at launch in an almost obsessive way, and then I kind of staggered away in a daze, off to other games.

I've dropped back in on Dreamlight Valley a few times, knocking out a Scar mission here, a Toy Story quest there, but I haven't spent nearly as much time in-game as I did in the weeks immediately after launch. But, if Gameloft's Early 2023 Content Roadmap is any indication, that may change soon. Content is building up to a tipping point, and I may just be forced back into the sheer awesome that is Dreamlight Valley to catch up. 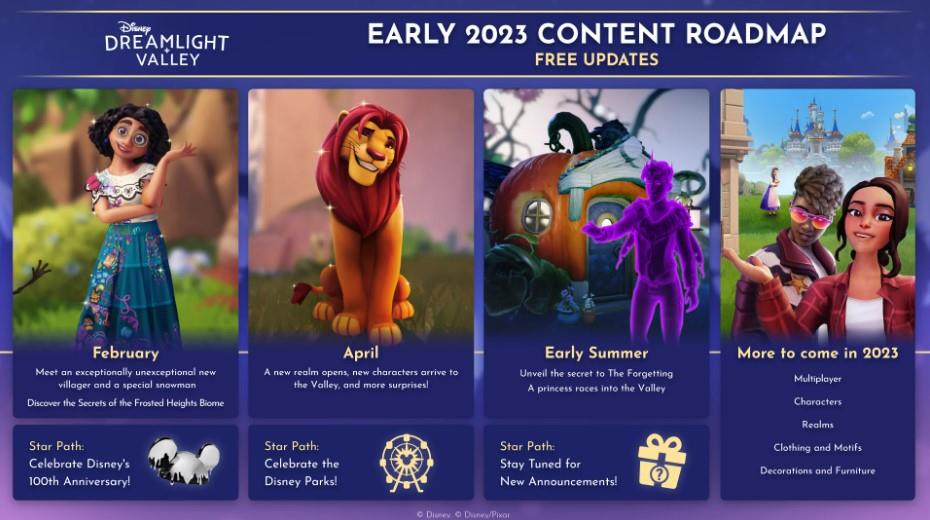 It looks as though players will be getting access to Olaf from Frozen in February, along with Mirabel from Encanto, along with a new star path (basically the game's season pass) that celebrates Disney's 100th anniversary.

In April, a new realm will drop and "new characters" will arrive, among whom will clearly be Simba from the Lion King - which makes sense, as Scar has been stomping around the Valley for several months now. There will also be a new star path that celebrates Disney Parks (give me a gigantic Epcot dome to take up the entire swamp, dang it!).

Early summer is a bit more mysterious - and I'm assuming that they mean "June" when they say "early summer". No new star path announced for that time period, and the characters are also not clearly announced, though the roadmap does state that "a princess races into the Valley". To me, this implies that Vanellope Von Schweetz is going to be showing up with a new quest line for players (What? No Candlehead?).

That still leaves a lot of 2023 open for promised features, primary of which is multiplayer. Though to be honest, I'm not sure I want to see what other people have done with their space. I think it will just make me feel bad about my shady-ass Valley, where the biggest feature is a swimming pool that Mickey Mouse always seems to be cruising.

Disney Dreamlight Valley is now out in Early Access on PlayStation, Xbox, Nintendo Switch, Mac, and PC. If you have Game Pass, you can hop in for free. Otherwise, you'll need to buy one of the game's starter packs to gain access. For more info on the 2023 Roadmap, check out the official site here.