The rumors leaked a few days ago and... the rumors were true. Dirt 5, Persona 5 Strikers, and Deep Rock Galatic make up the January 2022 PS Plus free games lineup. The games will go like January 4th for anyone with a current PS Plus account to claim. This also marks the the day before, January 3rd as the last day to snag last month's games - Godfall: Challenger Edition, Lego DC Super Villains and Mortal Shell (PS4 version only). Also, the three bonus PS VR games - The Persistence, The Walking Dead: Saints & Sinners – Standard Edition and Until You Fall will be unavailable after the 3rd.

Both Dirt 5 and Deep Rock Galatic will have both PS4 and PS5 versions available to claim. Persona 5 Strikers does not have a PS5 version. This will avoid any blowback like last month when Mortal Shell was only on offer for the PS4, not PS5 version.

On that note, an earlier similar decision has been reversed. The Final Fantasy VII: Remake released over the summer that was PS4 only, can now be upgraded to the PS5 version. Huzzah! Just go into the product page and select version for the upgrade for PS4 players. This does not include the PS5 exclusive Integrade DLC, that is still a separate purchase. 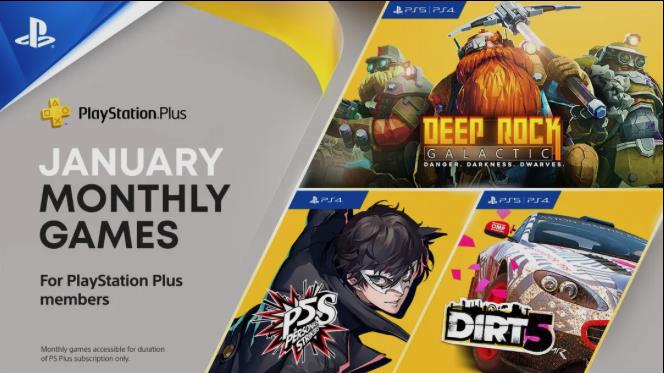