Ubisoft's Riders Republic has its hooks into me pretty deeply. I played some during the first closed beta, but didn't really lock in too much. The game just seemed to echo Steep's somewhat formless progression, which I never cared for. But during my extensive time with last week's trial period (I probably played about 10 hours - that timer system was a total mess), I grew fairly addicted to pursuing my various high-octane careers, careening from one wild event to the next. 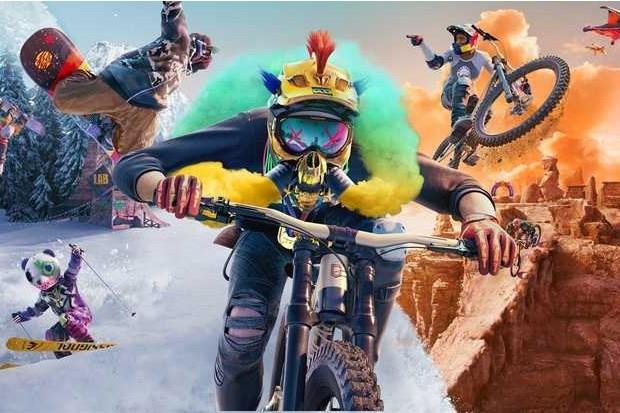 During my playtime, I've noted several tracks on the Riders Republic soundtrack that caught my ear, particularly Wiz Khalifa's "Black and Yellow" and Les Ukuleles Girls' cover of Coolio's "Gangsta's Paradise". The soundtrack is always interesting and appropriate background music for Riders Republic's bike-tricking, ski-jumping action, adding a lot to the overall friendly, goofball ambiance of the game.

So yesterday, when I was in the in-game store, browsing what new outfits I could spend my hard-earned Republic Bucks on, I felt a sudden vertigo when I heard the opening bass-filled rumble to Ice-T's 80's anthem "Colors". I actually looked around the room to see if it was coming from somewhere else, because it is so, so weird that this song would be included in this game. The tonal juxtaposition between the Riders Republic and an 80's LA gang anthem is...extreme.

Not that "Colors" is a bad song - it is actually the lead track from one of the first all-time great hip-hop motion picture soundtracks. Back in high school, my friends and I would use the track to test out stereo systems, cranking them all the way up and then hitting Play on the CD to see if the speakers would explode. It's a great song.

But is also a tale of gang violence, strife, and regret. The original release of the film Colors was controversial in many ways, from the ways it portrayed the cops as underdog heroes mixing it up with LA gangs to the real-life violence that erupted in theaters during the film's opening weekend. The film, and the soundtrack by association, were somewhat notorious at the time of release. The song takes a hard look at gang life in LA from the perspective of a gang member, with Ice-T's performance giving it a gritty realism. Take a look at these lyrics:

I am a nightmare walkin', psychopath talkin'
King of my jungle, just a gangster stalkin'
Livin' life like a firecracker, quick is my fuse
Vendettas of death back; the colors I choose
Red or Blue, Cuz or Blood, it just don't matter
Sucka dive for your life when my shotgun scatters
The gangs of L.A. will never die - just multiply

Does that feel like the sort of song one listens to while snowboarding down a mountain? Or paragliding above the tree line? Do 20-something bike enthusiasts love to listen to 80's rap anthems while skidding through the woods? I mean, I would listen to a song like this in those situations, sure. But I'm almost 50. Would the happy-go-lucky characters in Riders Republic listen to "Colors"? How do they even know this song? None of these people were born when this song was released, except for maybe the legendary guy who serves as the food-truck chef.

It's almost like a Riders Republic character is listening to a Grand Theft Auto soundtrack. Who in Riders Republic is playing "Colors"? How do they know the song? Who is picking the songs at the base camp? I have so many questions.