I played Rainbow Billy: The Curse of The Leviathan with my kids, and they kept taking the controller out of my hands

Saturday morning is a perfect time for cartoons, and though Rainbow Billy: The Curse of Leviathan isn't technically a cartoon, it feels close enough that my kids were excited to sit down and play it with me. 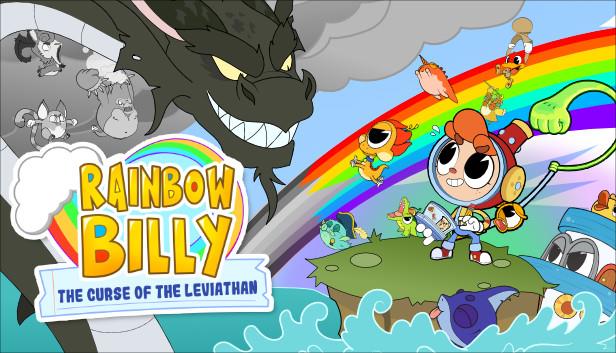 Rainbow Billy, a new exploration RPG from Skybound and Manavoid Games is a sweet game, full of kindness and light. And somehow, even with it's non-violent combat system (known as "encounters") and lessons about compassion, Billy doesn't seem overly treacly or sickeningly sweet. By couching it's life lessons in fun gameplay, Manavoid Games gets away with overtly expressing themes and ideas that might have been a very hard sell if presented outright in other visual mediums. My kids might have rolled their eyes at a straight cartoon that teaches the value of empathy, but they totally went for Rainbow Billy.

In fact, they went for it so hard that my daughter kept swiping the controller from me. I played for about the first twenty minutes of this stream, but after that, Pearl was running the show - sitting next to me and tugging the corded headset from my head (although I was granted permission to help with some of the more difficult rhythm-based minigames). There was a great deal of enthusiasm for Rainbow Billy, and it was difficult to get her to stop playing, even though she has to get ready for a Girl Scout Halloween party. As far as she is concerned today, Rainbow Billy > Halloween.

Immediately after we stopped streaming, both of my kids were demanding to stream the game again soon, so this might develop into a series. Heck, I may just throw the headset on my daughter and let her go for it. Rainbow Billy is a hit, and if you were wondering if your kids would like it, my jaded little media consumers went for it in a big, big way. Their favorite part of the game? The fishing minigame, of course.

Rainbow Billy: The Curse of the Leviathan is now available on Switch, PlayStation, Xbox, and Steam.