E3 2021: Let's take a closer look at these Starfield screenshots, shall we?

John already caught the phenomenal Starfield trailer today at Bethesda's E3 2021 showcase, so you've probably already seen that. But I'm playing catchup and I like to start playing games of rampant speculation whenever Bethesda is involved. So, if it's alright with you, I'd like to pore over these screengrabs I got from the trailer and see if we can't glean a little worldbuilding—if not gameplay—judging by what we see in the cinematic. Although yes, I know, cinematics don't show us much when it comes to What You Do in the game. But Bethesda loves to include lots of little details that will be relevant to at least the backdrop, aesthetic, and possibly even little things you'll pick up and put down in the game.

Firstly, let me scribble down (poorly) the script we'll be hearing throughout—or at least what I was able to make of it, considering the radio-check portions which are intentionally a bit muddy; YouTube closed-captioning doesn't even recognize someone's saying words during the radio chatter.

RADIO: [Constellation Starship Frontier, we have you on scanners. Performing Rhodes (?) systems check. Helium-3 tanks: check. Seals are intact. We are still go.]
VOICEOVER: "They say the wonder is not that the field of stars is so vast, but that we have measured it. You're part of Constellation now. Part of our family. What you've found, it's the key to unlocking everything."
[We read you, Constellation.]
"This is all we've been working towards.
[Jettison (?) route looks good.]
"We've come to the beginning of humanity's final journey."
[Prepare for departure. Graviton Loop Array Spool (?): check. Business lane (?) is clear.]
"That's why we're here."
[Main engines: go. Ignition]
"To discover what's out there."
[Good luck, Constellation. You are go for launch.] 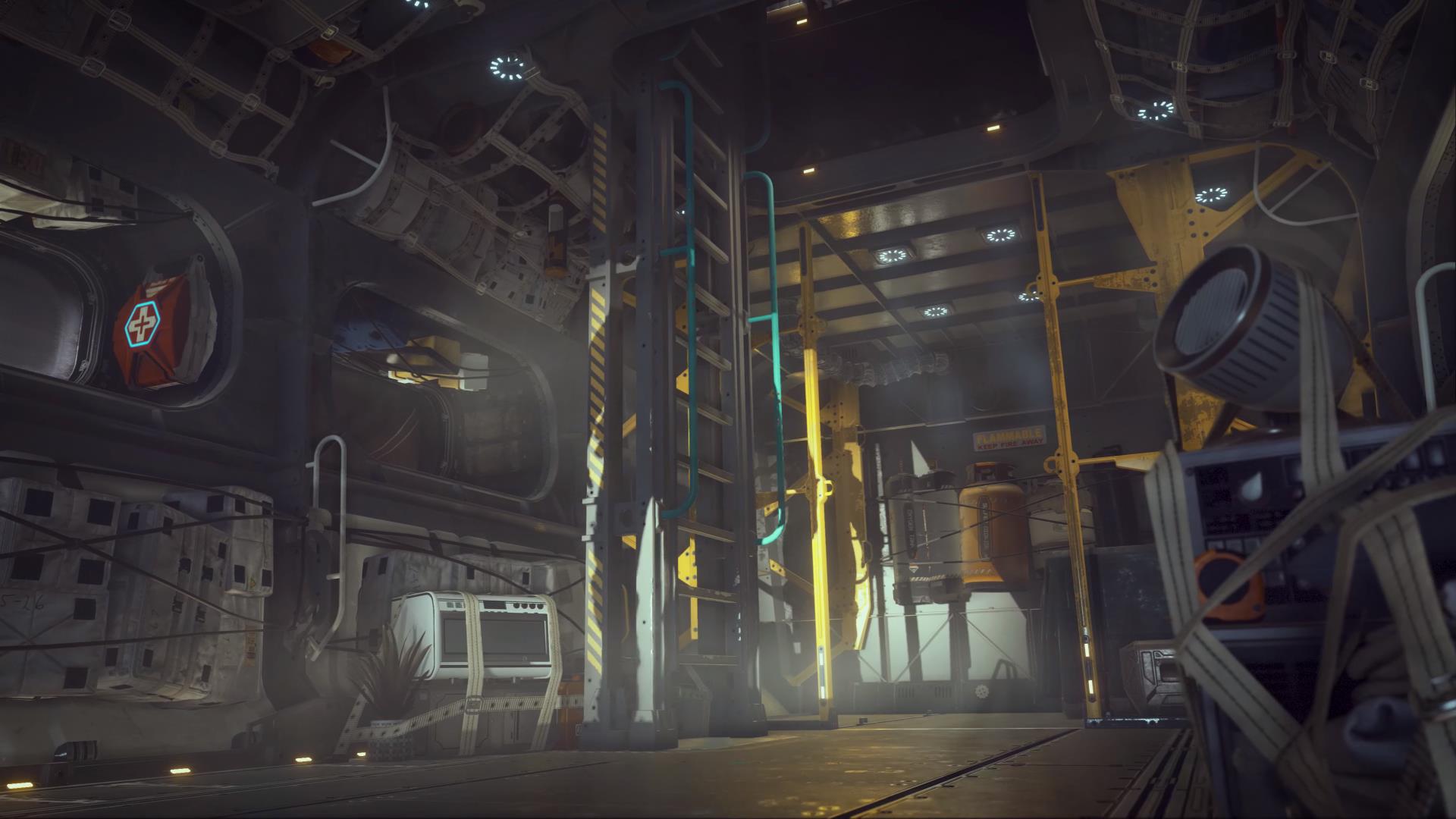 This first image (above) is in the cargo bay. Good industrial-strength construction. Cargo netting. Sharp shadow from the character. Easy-to-spot medkit. Explosive tanks. I thought those two open cubby holes might be for sleeping, and they might be, but there's a bit of clutter to hop over when heading in and out of them. The aloe plant implies we're visiting places with atmosphere, and will also resort to such methods or ingredients for healing purposes. 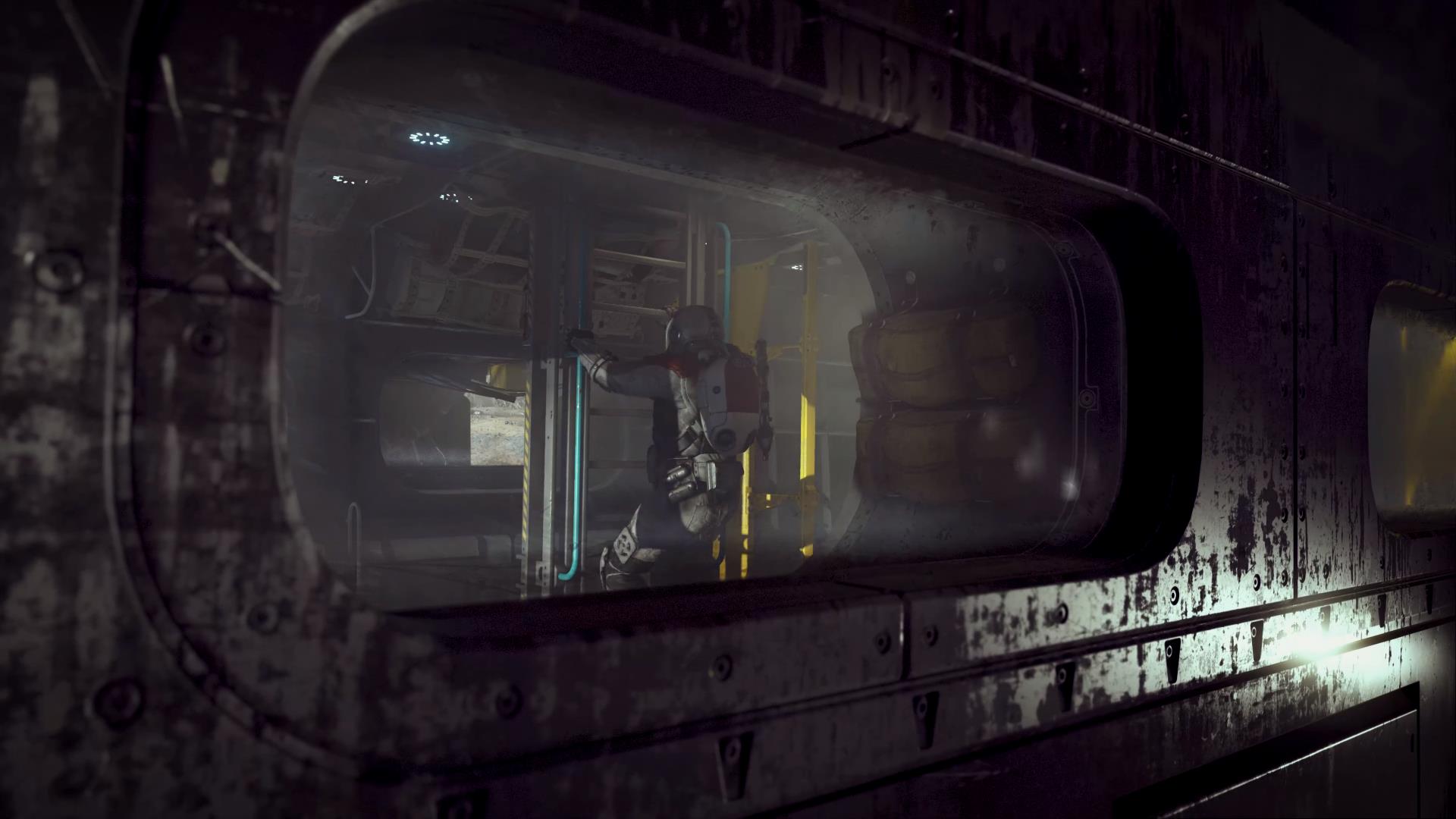 It appears that you're coming in out of inclement weather of some sort; weather that clears up magnificently by the time you reach the cockpit and have another look outside. Even if it's not weather, per se, and just a split second before sunrise, there's a hostility in the air. We also catch a glimpse of a rifle on your back. That rifle will come off and be placed on a table for a closer look later. 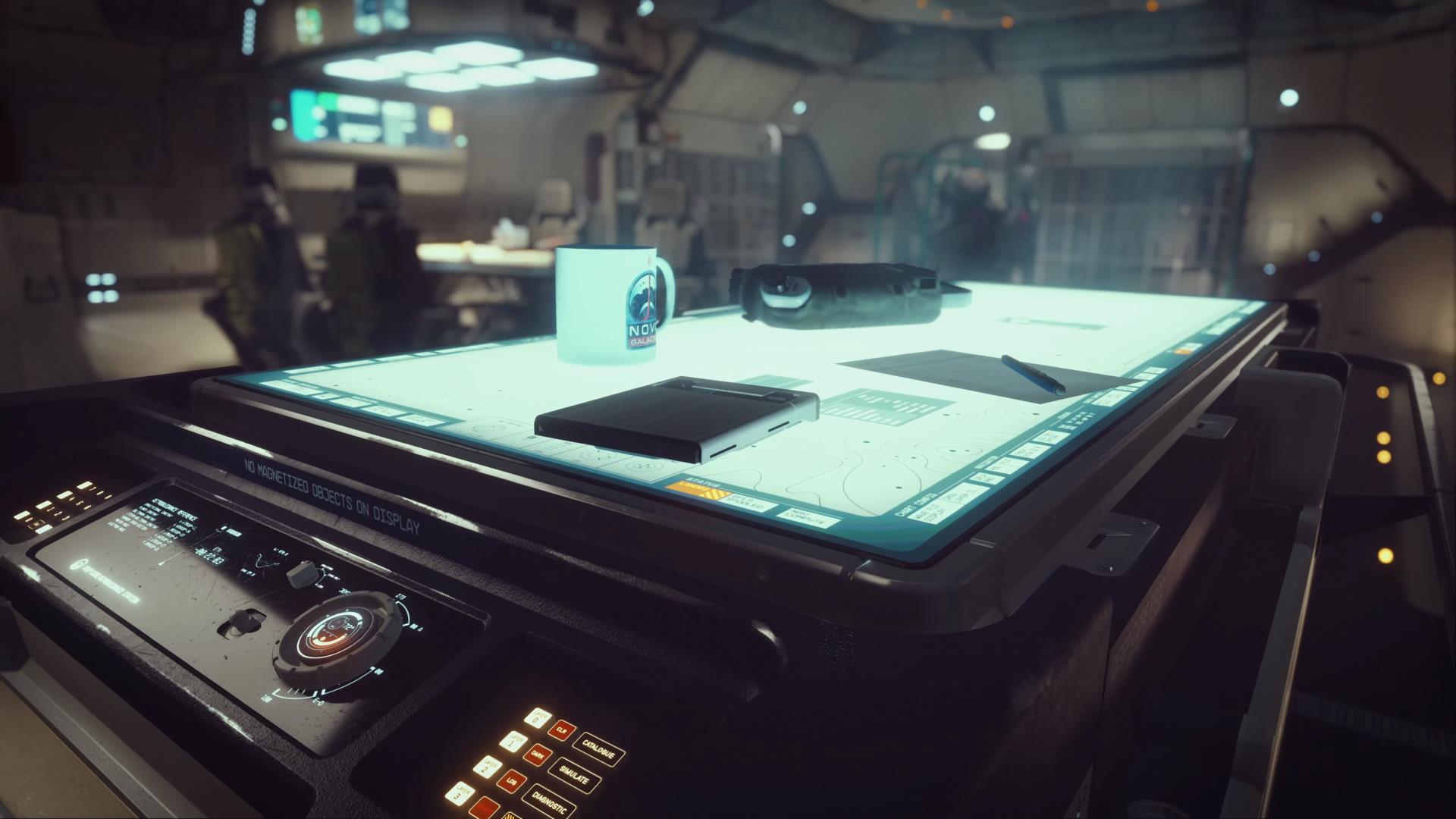 Next, we're up in a command or staff-meeting area, though it looks like this will just be about a pilot and their robot. The display table can catalogue, simulate, or perform a diagnostic. The oven dial-looking thing on there resembles imagery we've seen before related to the HUD. Not exactly, but thematically familiar. With a warning saying to keep magnetized objects off the display, I wonder if that implies you'll have magnetized objects to play with. 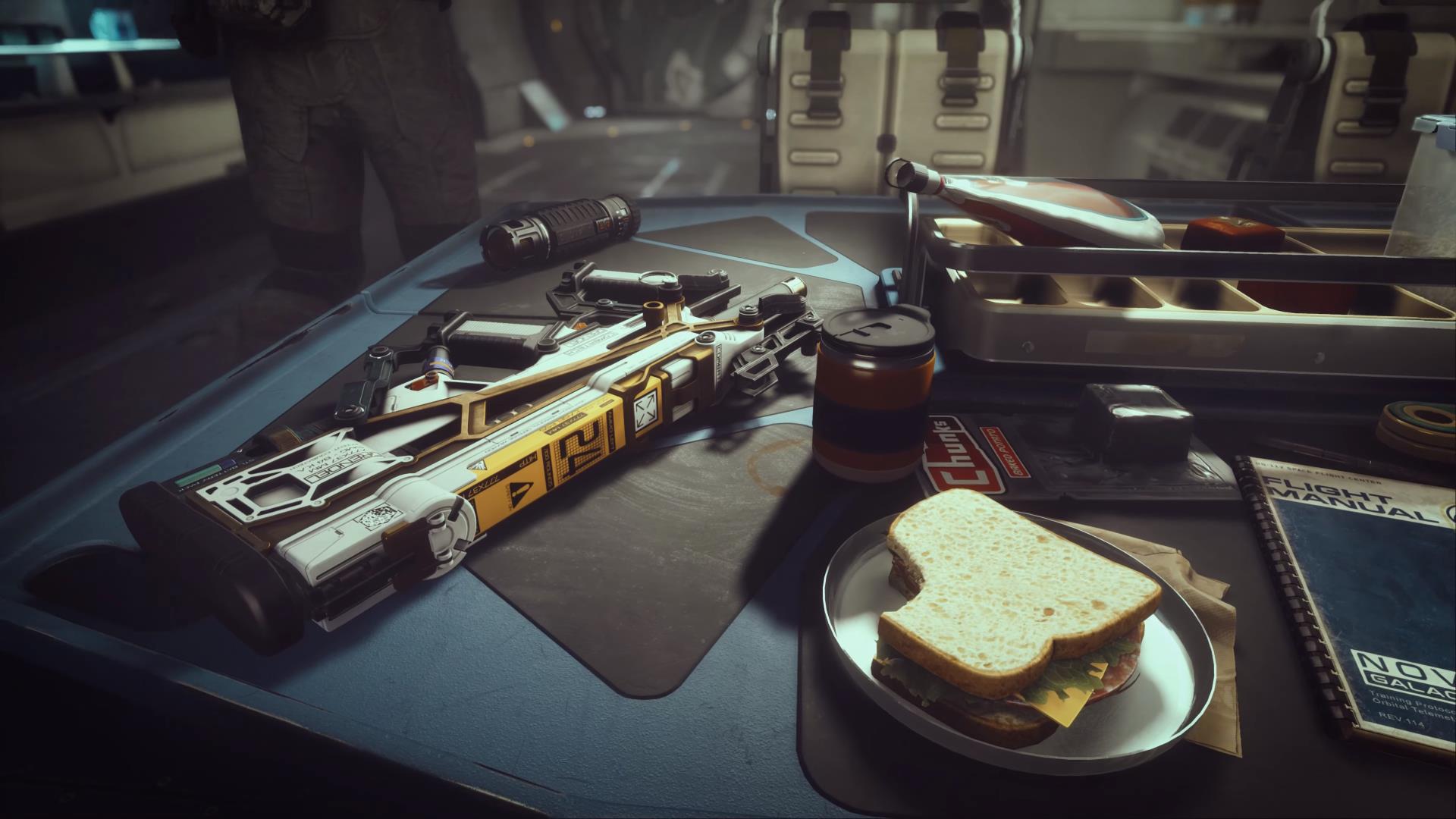 Here's that rifle we saw on our back earlier. The display shows 24 shots left. So, if any of us were afraid Starfield might be a walking simulator of sorts, it's not. Looks like we'll have some threats (foreign or domestic, alien or Terran) that we might have to put down. That cylindrical object is probably a grenade of some sort. Note the bite of a sandwich, and the cube-shaped apples on the food tray. The teardrop sack might be a "health potion." What we're looking at is a table full of combat and healing supplies. 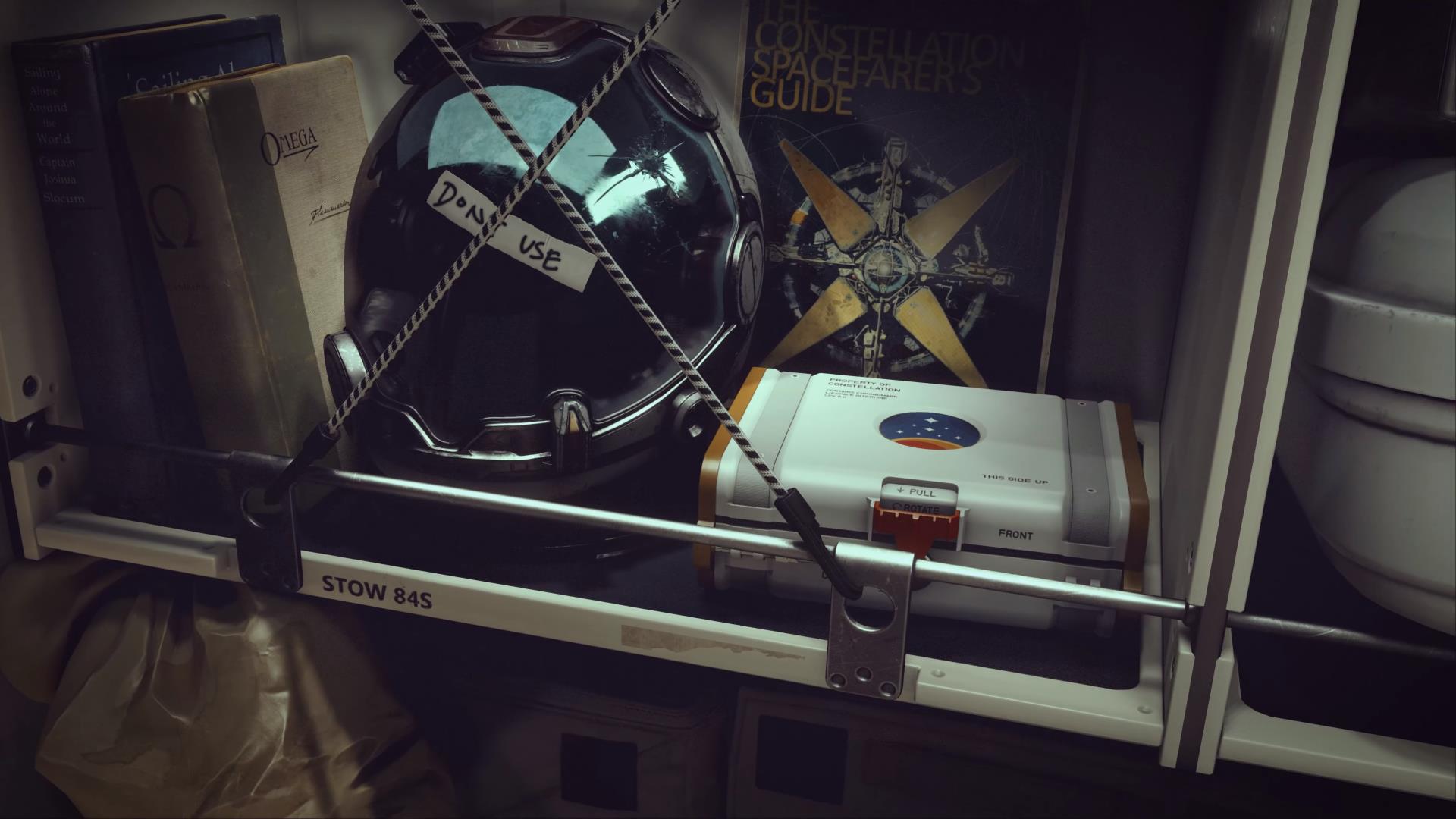 This image features two novels, a helmet that took a life-threatening bullet (?) that pierced the visor, The Constellation Spacefarer's Guide, and some other safely sealed book (possibly a glossary of terms, etc.). Those first two novels are real things. Captain Joshua Slocum was the first person to sail single-handedly around the world. And the Omega novel—full title being Omega: The Last Days of the World—by Camille Flammarion is an 1894 book concerned with the philosophy and political consequences of the end of the world as an asteroid heads directly for Earth. I haven't read either of those, but literature nerds, holler! 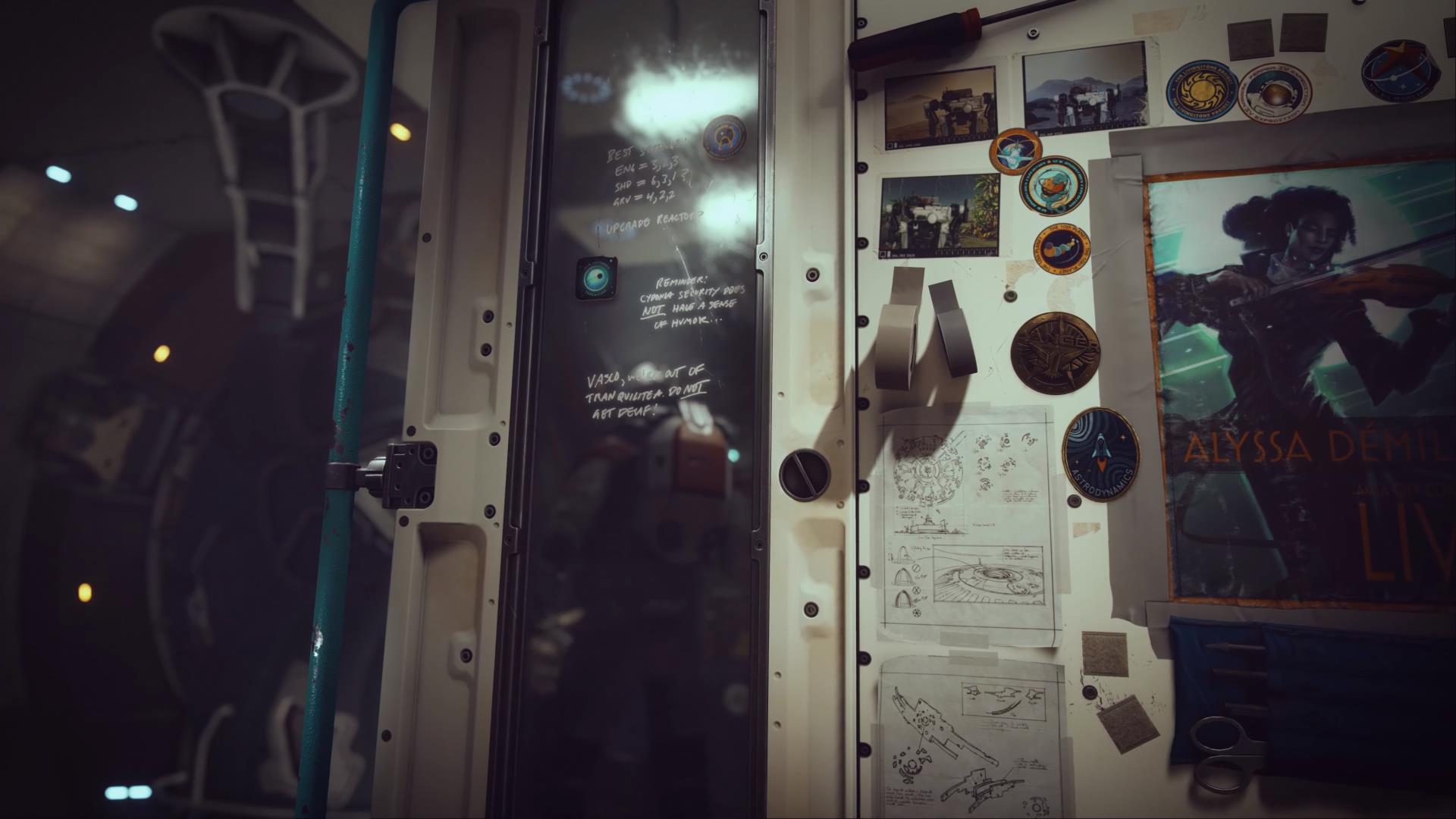 The handwritten notes on the window are cute. I thought this would be a very single-player game, but if you're writing notes to a "Vasco," or if your name is Vasco, that sort of implies an NPC somewhere around here. The notes, from top to bottom, look at best settings for ENG, SHD, ARV. I'm not certain where you're punching in these settings, but the glowing table from earlier has a keypad on it. The next note is a question as to whether or not to upgrade the reactor, implying our ship is, well, upgradeable. There's mention of Cydonian security. Cydonia is "the face of Mars" pictures that I remember gracing tabloid headlines in the '80s: Face of Jesus Found on Mars! and stuff like that. Then a note about picking up more tea. Tranquilitea. Not decaf, exclamation point. The poster tells me there's the potential for live musical performances in the game, maybe? And the tons of expeditionary patches would be cool in-game trophies to earn for this game that will let you "explore with unparalleled freedom." 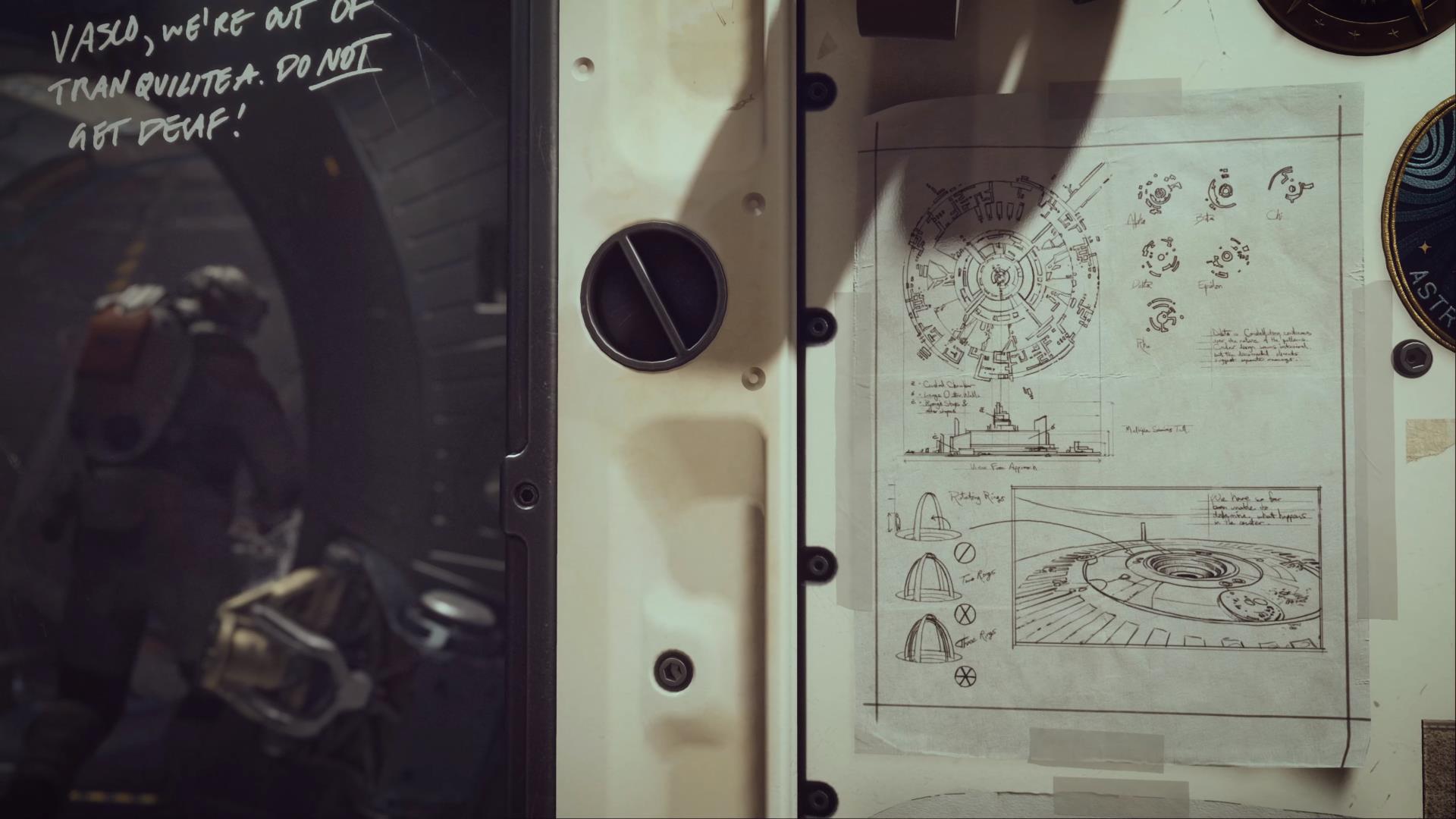 Here's a schematic type of drawing looking at some sort of gate or portal, I'm guessing. It shows how they form up like the St. Louis's Gateway Arch with one, two, and three rings. There may be nine of these gates, seeing the nine styles drawn up there labeled Alpha, Beta, Chi, etc. 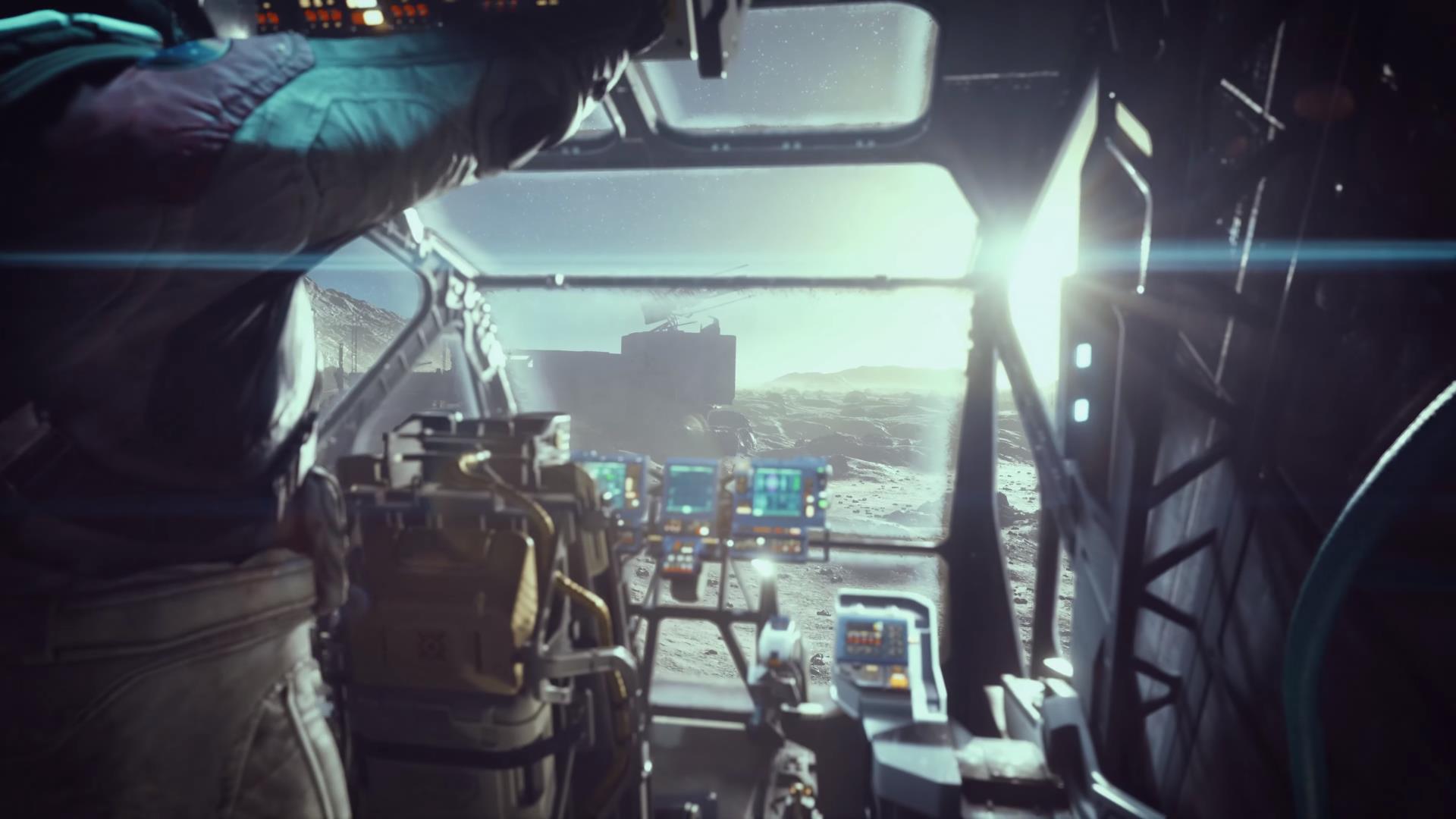 The next several shots are all cockpit. Safe to say we'll have plenty of gameplay happen at this very spot. And I'm going to admit that my copy of Microsoft Flight Simulator sits unopened on my hard drive, so shoving a bunch of analog switches in my face may seem exciting, but I'm illiterate in their use. 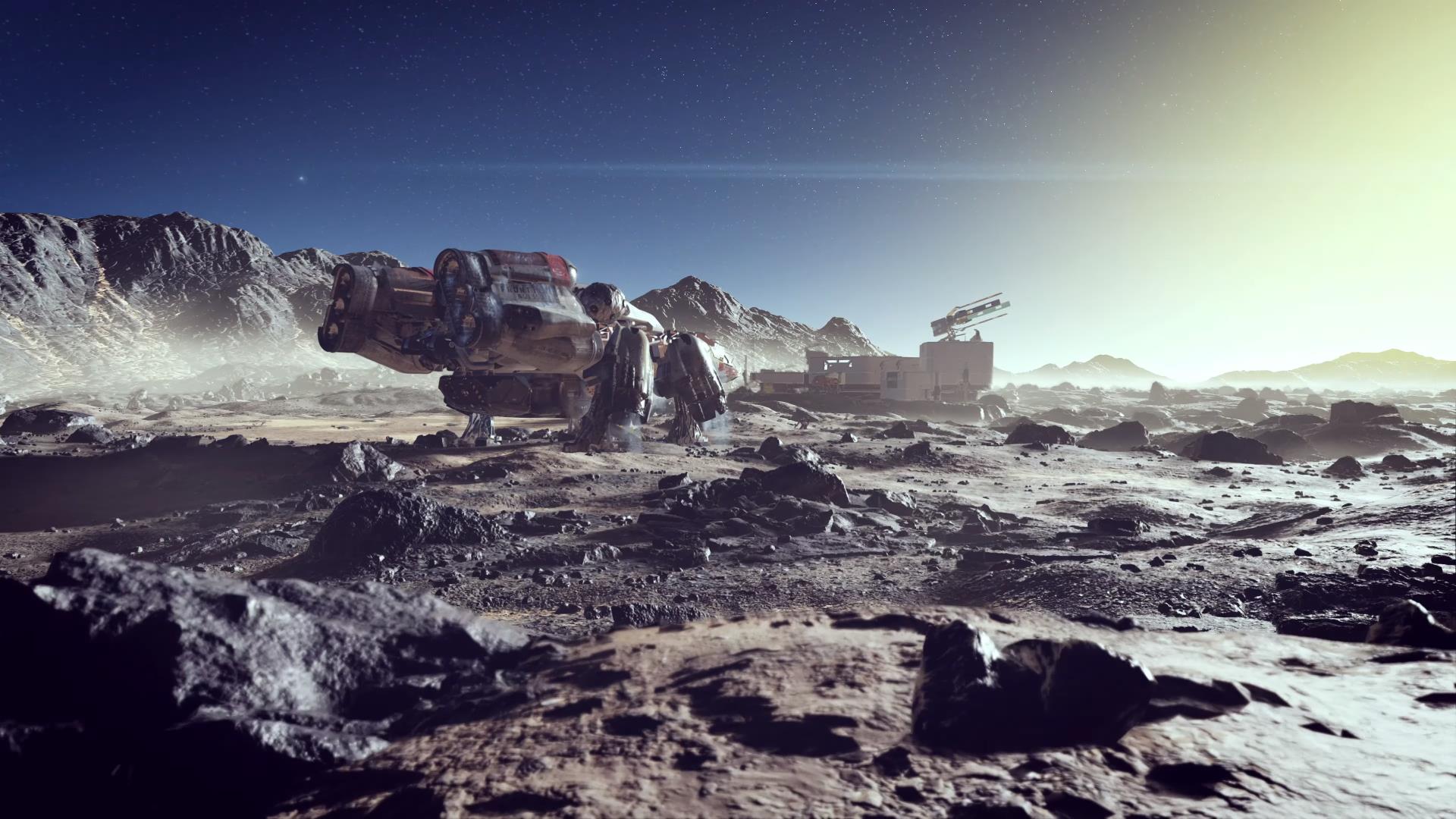 This shot is confusing at first because the camera is moving forward and then continues to move forward like you're looking out the front window of the ship, but no, the camera had jumped back so you get a full-fledged look at the ship from behind. The ship is looking beefy with multiple rocket engines poised for takeoff. This outpost is so unused to having visitors that it doesn't even have a flat space cleared out for parking. Look at the photogrammetry Bethesda is getting out of the Creation Engine 2—this lunar surface's textures and high-contrast light and dark settings are striking. It does appear that, whether natural or terraformed (atmos-formed?), that this particular planet is rocking a thin atmosphere of translucent blue. 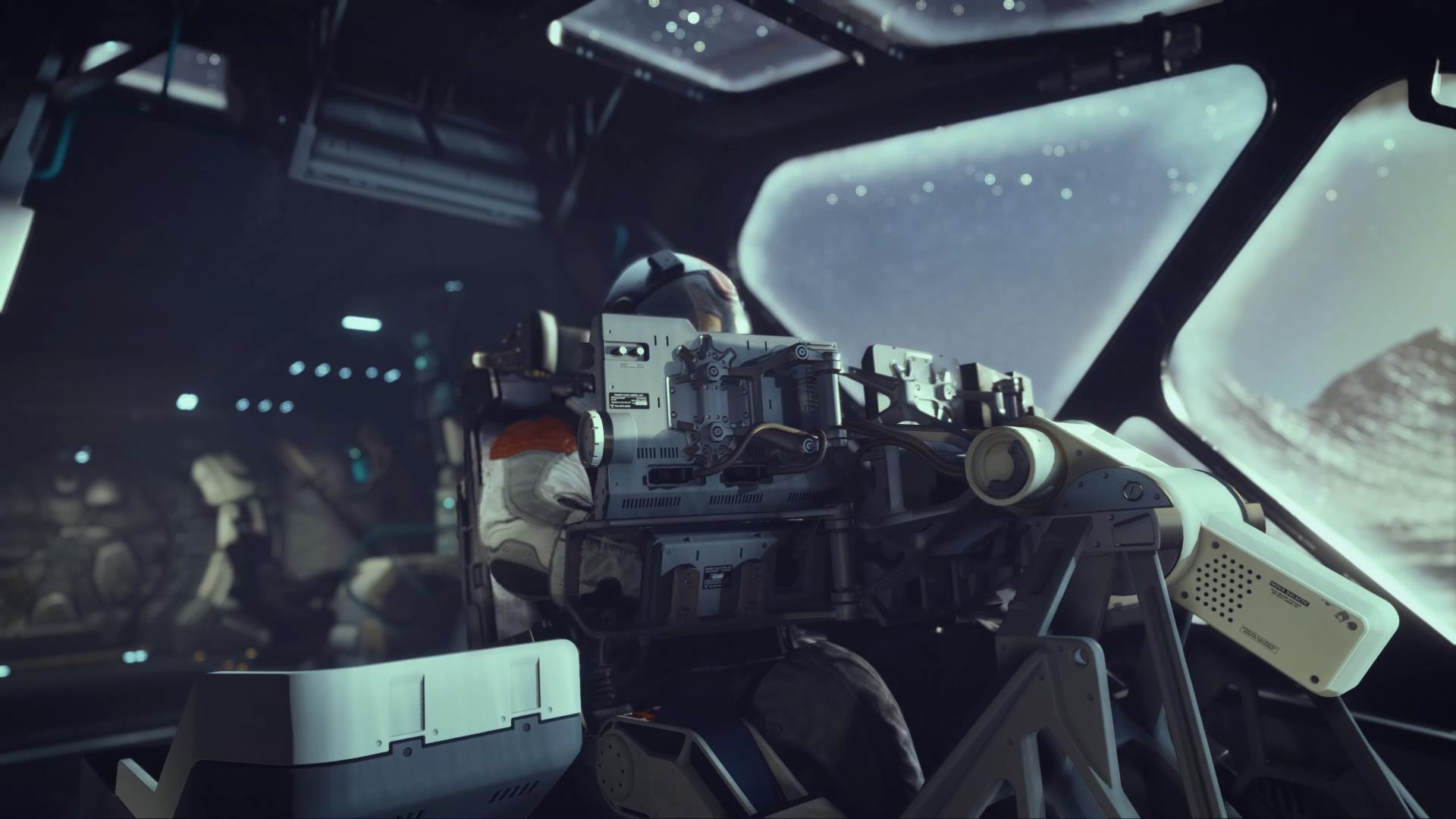 The pilot pulls up nice and snug to a triple-monitor setup. There appears to be another seat in the background, but this looks like it's going to be that very single-player experience we're all hoping for, at least as far as piloting is concerned. 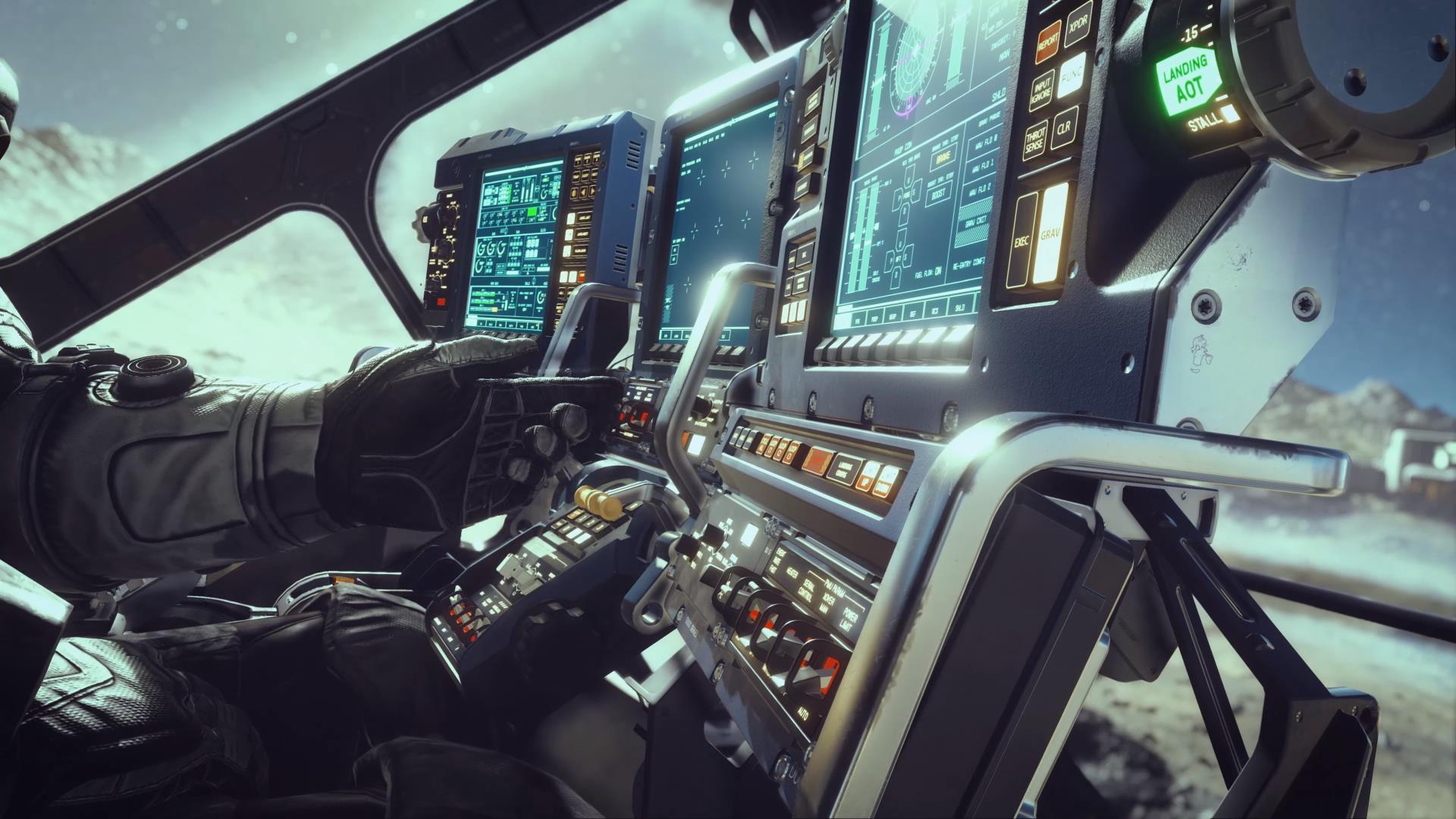 Here's a crunchy look at all those analog buttons and switches coupled with a hardcore HUD. I can only pray that Our Lord and Savior Todd Howard will not make this a hardcore flight sim. I already mentioned how unopened my copy of MS Flight Simulator is. Don't make me learn these switches, Bethesda, just let me fly. 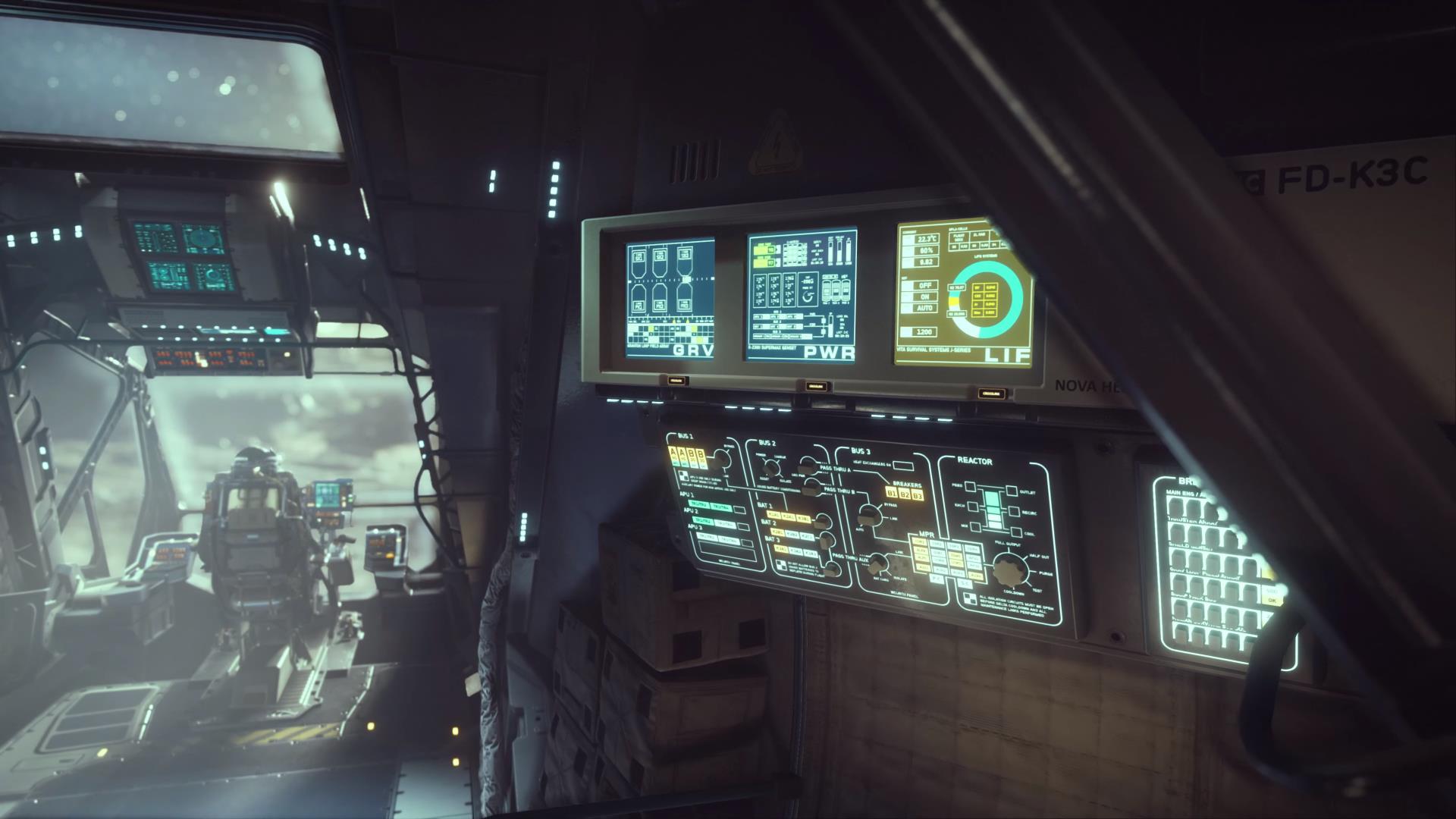 There are plenty more monitors for, uh, monitoring. So it's possible there's going to be plenty of autopilot time where you'll be out of your seatbelt, but able to wander the rest of your fully explorable ship. Again, just guessing off a cinematic trailer. GRV, PWR, and LIF might be gravity, power, and life support systems. Keeping that trifecta of gauges happy could be key to survival. I mean, just saying. LIF. 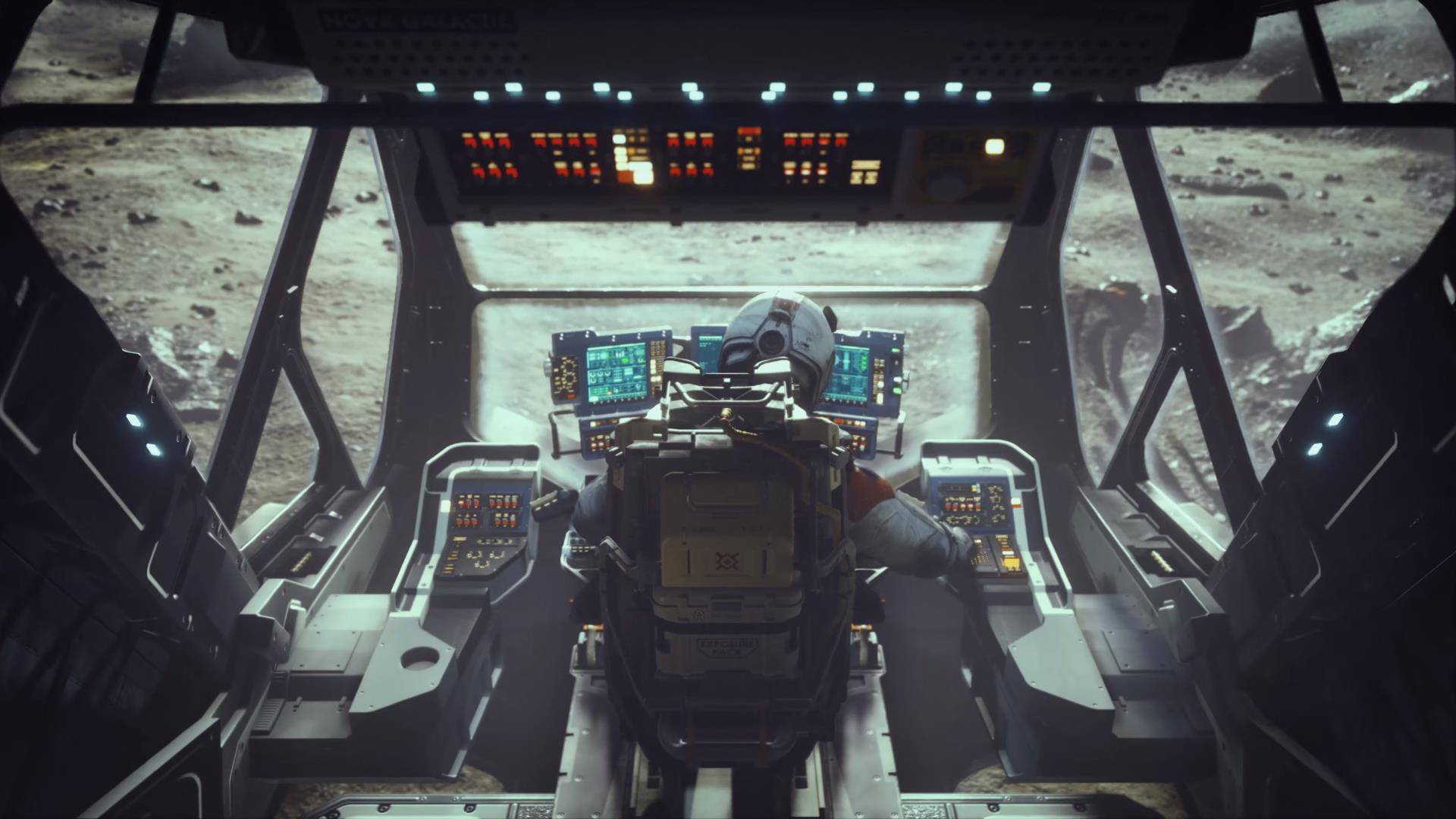 Out of the right-hand window, you see your approaching robot. It appeared in selfies  with different biomes in the background, earlier next to the notes about Tranquilitea. I'm seeing those robo selfies in cold, rocky climes; on red, dusty surfaces; and even tropical settings. Get robo back in the boat. Don't want to leave it behind, as I'm guessing it'll be taking photographs and soil samples and things of that scientific nature wherever you go. 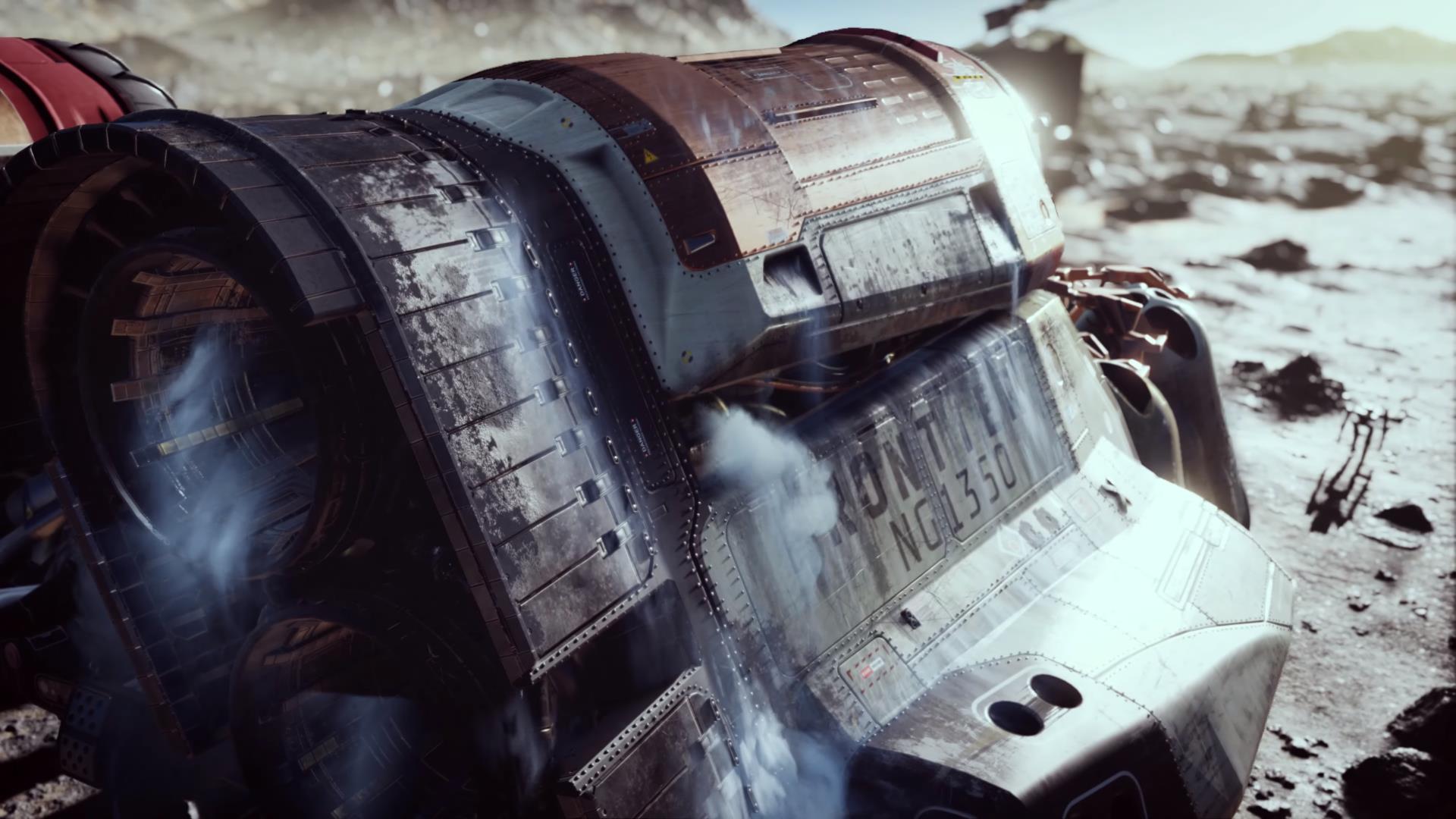 Now we get clarification that this ship is called Frontier, part of this Constellation space group. NG1350 is its ship designation. Not positive what NG stands for, but it's where you would find HMS (Her Majesty's Ship) or USS (United States Ship) on ships from the English or U.S. nations. So NG is likely something along those lines. Near Galaxy? Not Going? Nutri-Grain? 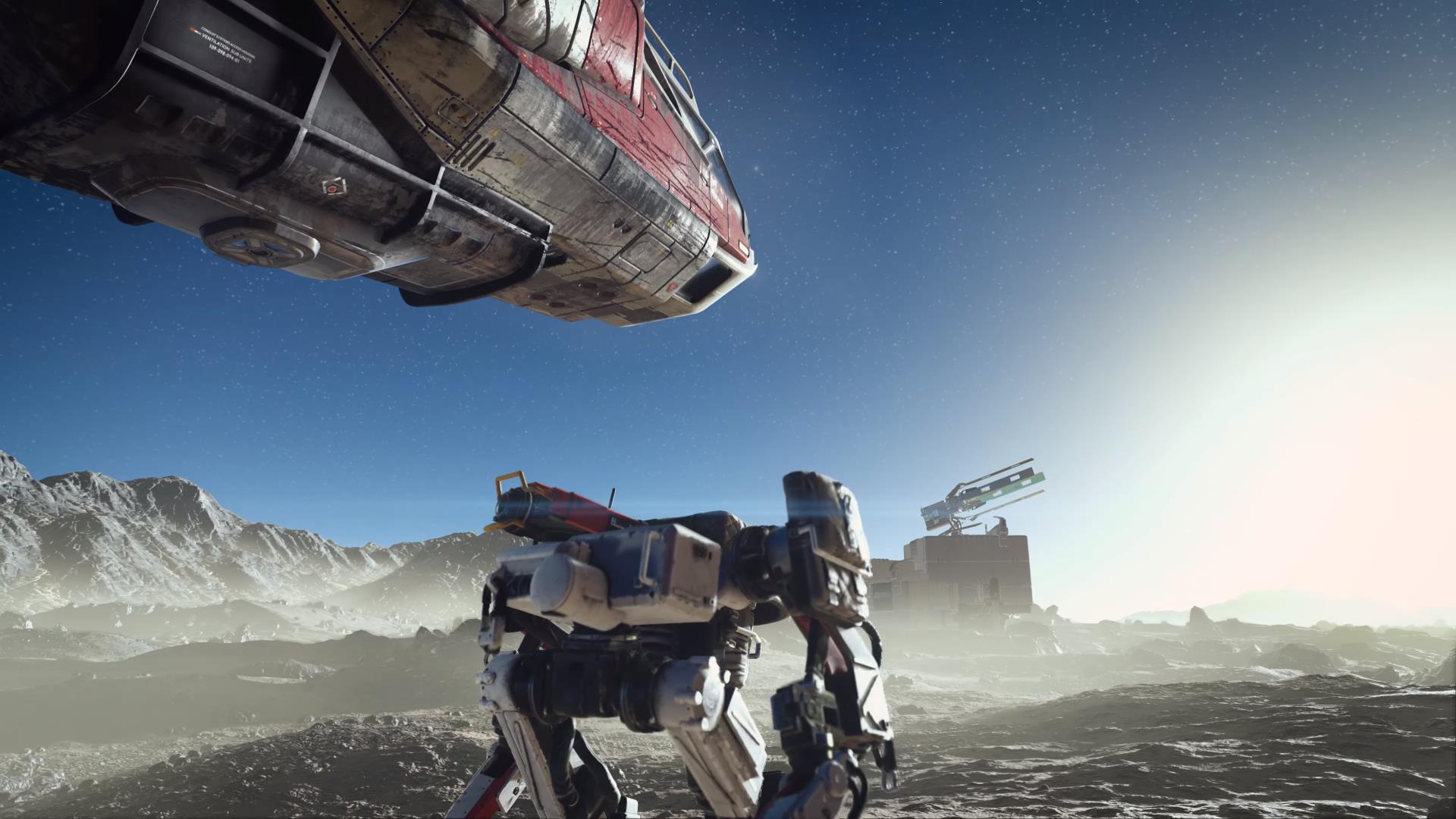 This shot gives us a closeup of robo for scale next to the Frontier. I love its slightly stilted, not-entirely-smooth movement. Feels real. We also see how scratched up the exterior of the Frontier is. We're not working with Mass Effect/Star Trek outer shields here. It's just you and the elements. Even a tiny pebble in space can become a missile when it's traveling 50,000 mph. 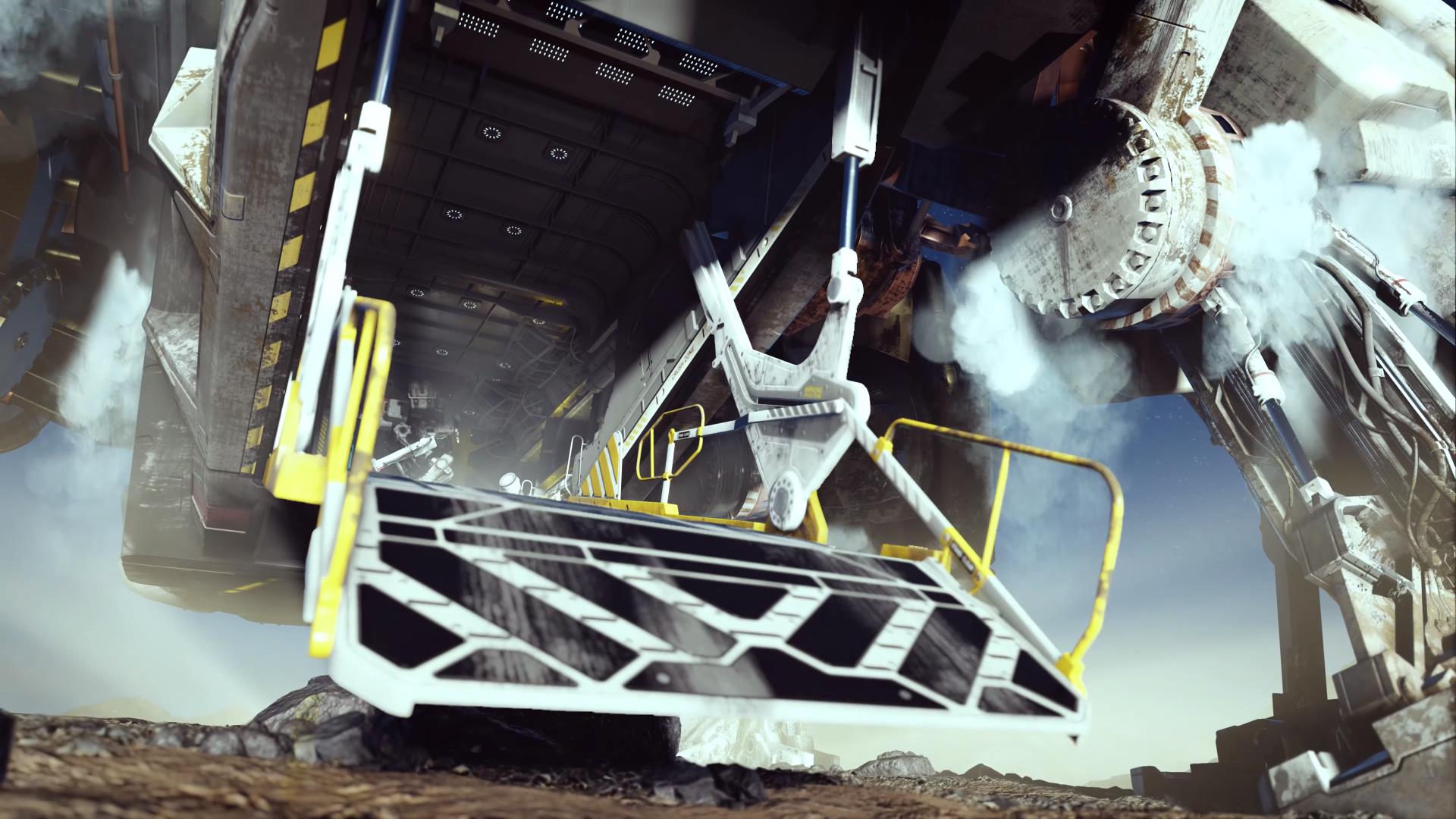 Here's a look at the front-facing cargo bay door, with robo getting cozy inside like a joey snuggling into a marsupial pouch on momma kangaroo. This is the same point of entry the pilot used when embarking on the ship at the beginning of the trailer. 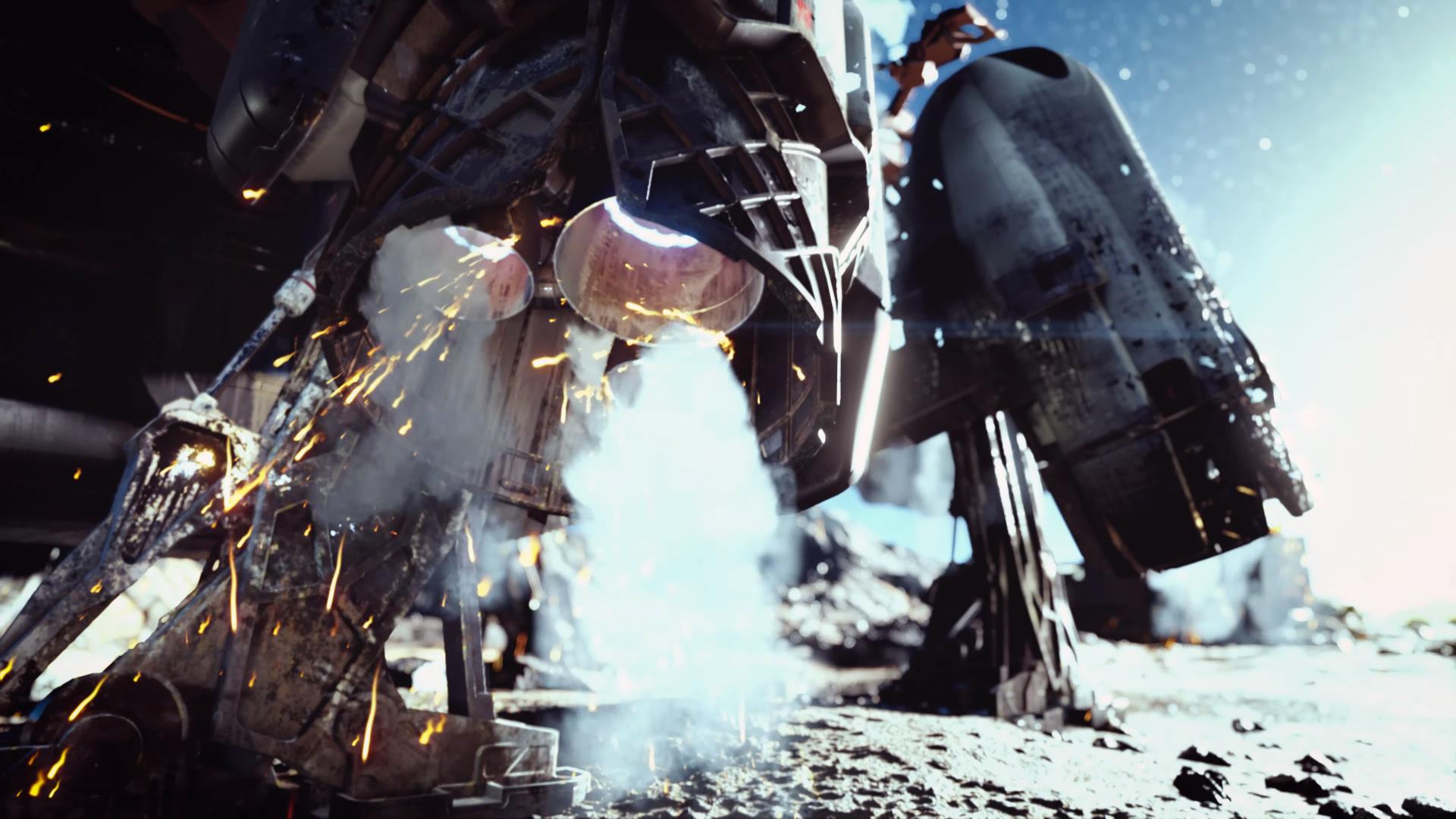 The sparks flying out of these rocket tubes are awesome. Looks exactly like a NASA space shuttle lifting off. I hope there's some way to see and appreciate that every single time you launch. Some will get tired of it. I will never get tired of it. I also love those big but agile mecha-like feet on the Frontier. When every place you visit doesn't have a welcome mat, I'm guessing you'll have to get good at landing on any surface available to you. You see ice from the cold fingers of space—cold fingers of this planet with enough moisture to create ice—break and fall off the engines. And pardon me if I'm using poor terminology here. I never was going to graduate from NASA University. 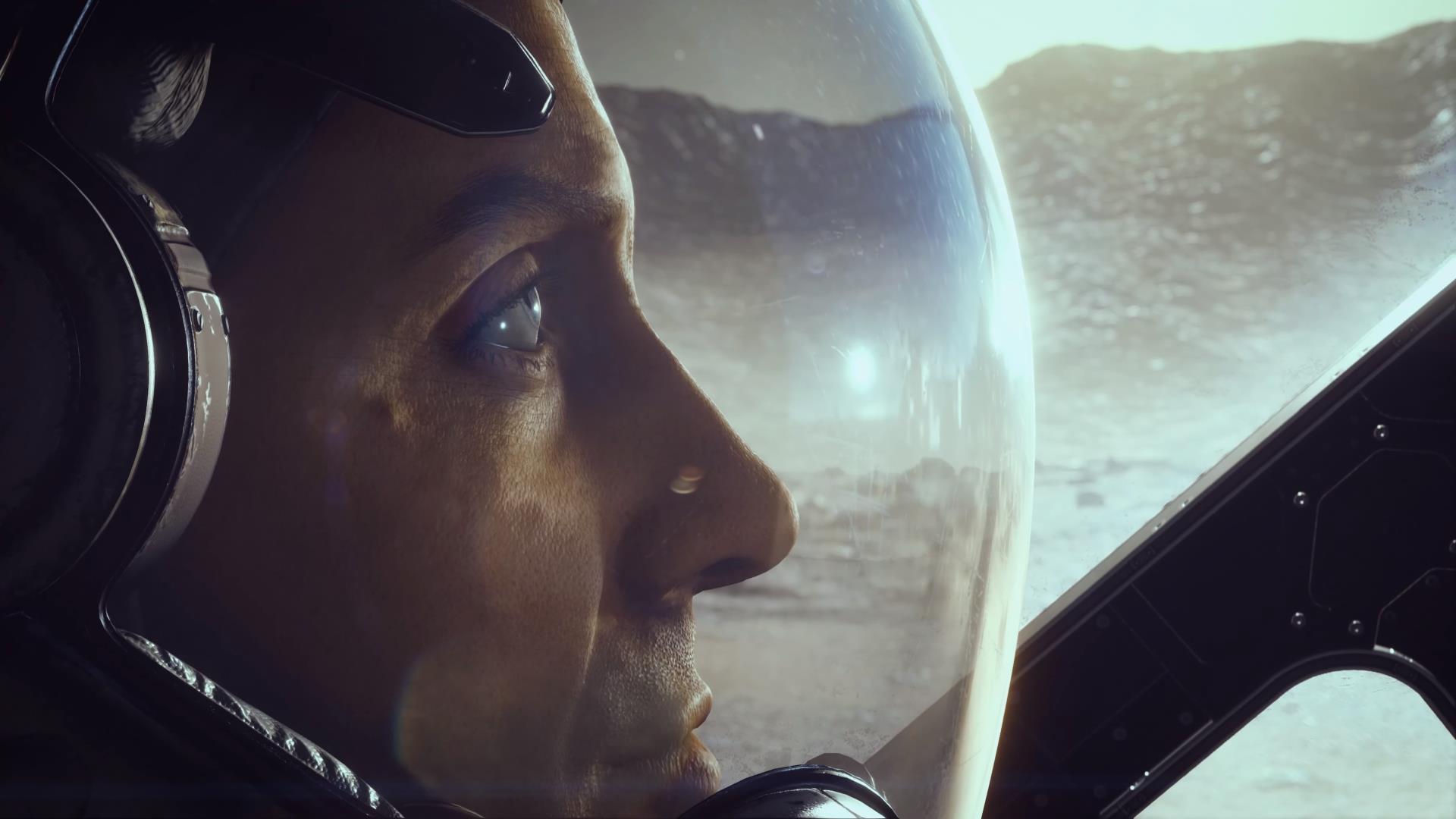 Here's our first look at our pilot's face. The official Starfield website says you can "make any character you want." It says it in such a nonchalant manner that I hope it speaks to choice rather than your choice doesn't matter. This character, a woman, I presume—though there's a lovely androgyny to her features—looks up at the stars with beautifully drawn crow's feet at the corners of her eyes, and a clear, atmospheric blue in her pupils. 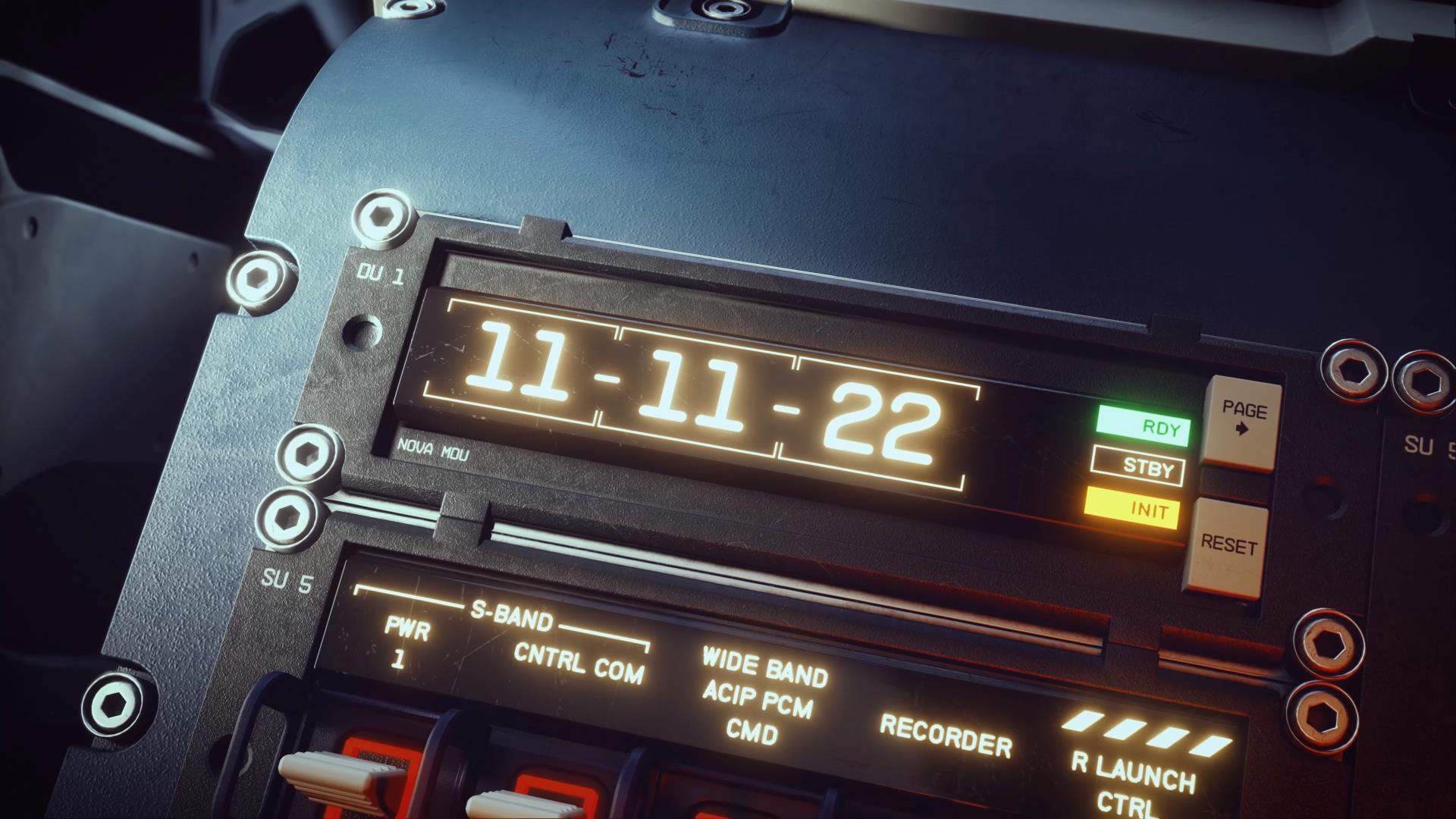 The last visual we get is a launch-date joke embedded into the ship's display panels. The launch date of November 11, 2022, is significant to Bethesda: It marks the 11-year anniversary of Skyrim., whose launch date was 11/11/11. So, 11/11/22 is yet another cute numeric nod to Bethesda's Elder Scrolls legacy. Todd Howard officially owns the date 11/11 now. It is the day he will be granted sainthood.

So, that was a much closer look at the first gameplay teaser of Starfield. It's coming November 11, 2022 (in a year and a half) to Xbox Series X|S and Xbox Game Pass on day one.