Gwent started as a little side game built inside The Witcher 3: Wild Hunt. It was a pretty decent game in its own right and a fun little distraction inside the larger game that made for some interesting and worthwhile collectibles tying into a few quests. It was successful enough that it swapped into its own standalone title, Gwent: The Witcher Card Game.

The standalone game took on a life of its own through the beta to full release. The rules and objectives were built out further and further to try and beef up a game moving from a side-quest into a fair and balanced standalone offering. Personally, I wasn't overjoyed with all the changes, and haven't really touched the game much since the Beta as a result. When I tried to get back in, I was thwarted again as console didn't support cross-save, before console support was later dropped entirely. Overall, I think it is a good game, don't get me wrong... I've just kept a few others higher on my CCG list.

That being said, it is great to see the game still going strong, moving into its fifth season. As the trailer below announces. Journeys are described in the Gwent FAQ as "our level-based progression system, allowing players to level up and unlock rewards simply for playing GWENT." There is both a free and paid DLC tier, with paid getting you ore rewards.

Gwent: The Witcher Card Game is available on Mac, PC, iOS, and Android. Check out the trailer just for the T for Teen rating alone, it's got it all: Violence, Blood and Gore, Language, Crude Humor, Suggestive Themes, Use of Alcohol, and Users Interact. Hmm... one of these things is not like the other... Also the full press release for Journey #5 (not to be confused with Mambo #5) is after the read more link below.

The Fifth Season of Journey Begins in GWENT!

CD PROJEKT RED announces that Journey is back for a fifth season in GWENT: The Witcher Card Game. Players can start levelling up once again to unlock brand new, exclusive rewards for free right now on PC, Apple M1 Macs, iOS, and Android. 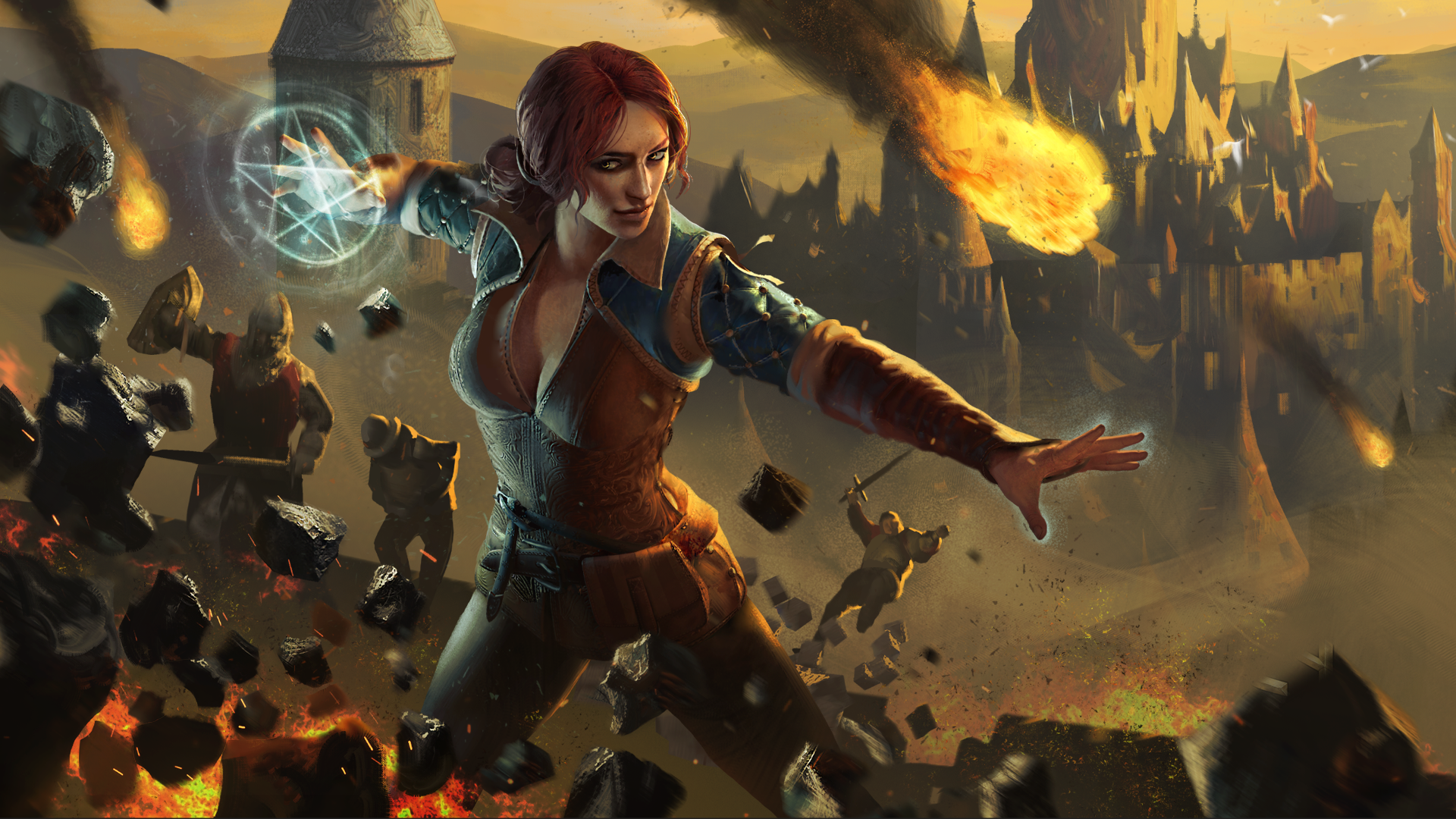 Journey is GWENT’s progression system which rewards players as they level up by earning victories in the game’s Standard, Seasonal, and Draft mode matches. Season 5 brings over 100 levels to unlock, each containing exclusive avatars as well as Reward Points, which players can redeem for items available in GWENT’s in-game Reward Book. Journey’s fifth season will last for the next three months and is themed around Triss Merigold — legendary Temerian sorceress, and Geralt of Rivia’s beloved friend.
Watch the trailer for Season 5 of Journey
In addition to the base tier of Journey, free to all players, the Premium Pass is also available — granting players instant access to the customizable Triss Merigold legendary neutral leader skin. It also features even more rewards to unlock, including different fashion outfits, trinkets, and auras for Triss, premium and standard Card Kegs, player titles, as well as animated borders and avatars. Additionally, players can also purchase a special bundle which includes the Premium Pass as well as an instant Journey progression boost.

Learn more about Journey’s newest season
GWENT: The Witcher Card Game is available for free on PC via GOG.COM and Steam, Apple M1 Macs running macOS, as well as on Android and iOS. For more information on GWENT, visit playgwent.com. 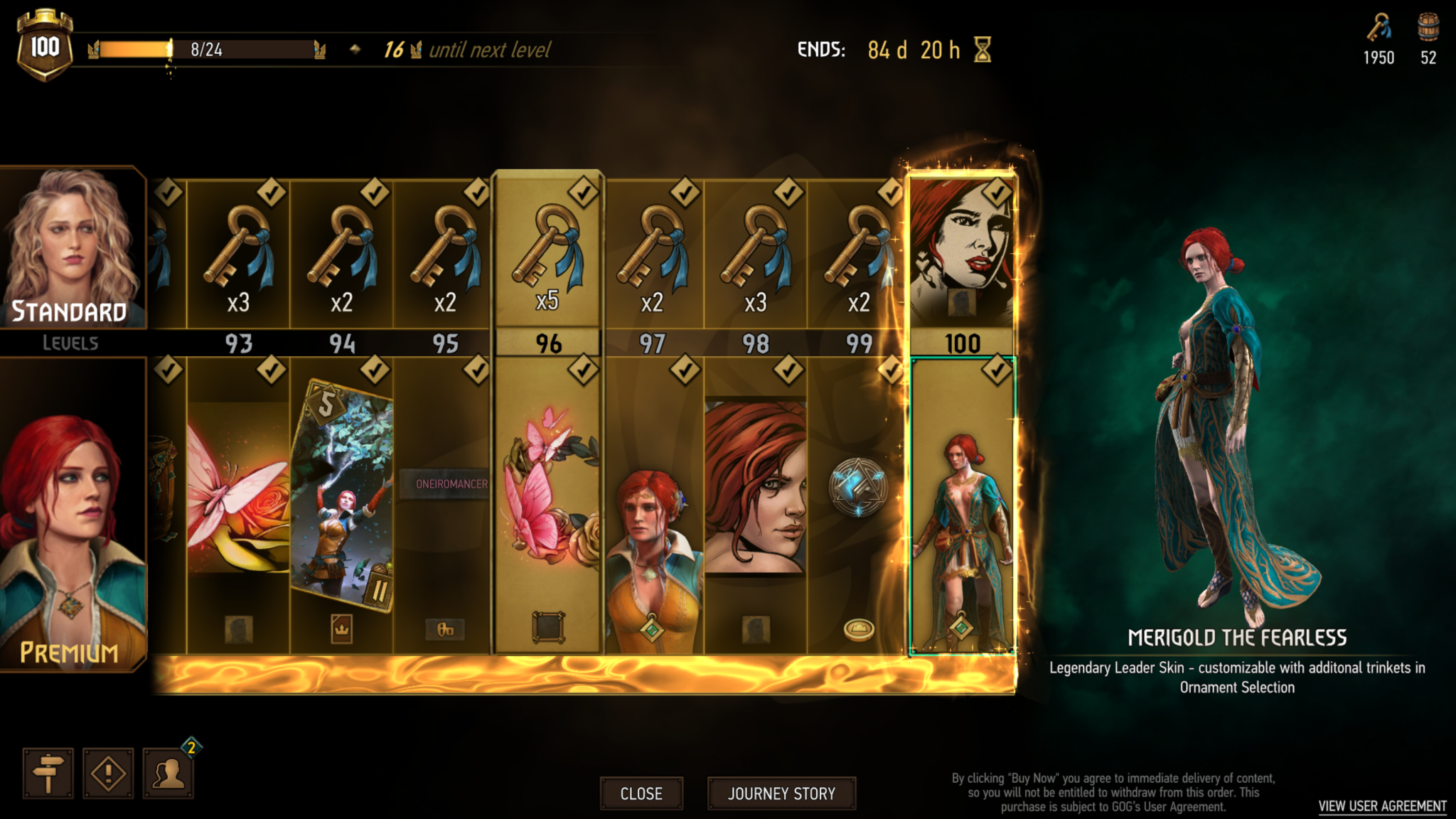 
CD PROJEKT RED is a game development studio founded in 2002. It develops and publishes video games for personal computers and video game consoles. The Studio’s flagship franchise, games from The Witcher series, has sold over 25 million copies worldwide. Its newest release – The Witcher 3: Wild Hunt – debuted in 2015 for the PC, PlayStation 4 and Xbox One, and has since received over 800 awards and accolades, including 250 Game of the Year awards. Along with GOG.COM, a game store offering hand-picked titles for PC and Mac, CD PROJEKT RED is part of the Warsaw Stock Exchange listed (ISIN: PLOPTTC00011) CD PROJEKT Group.