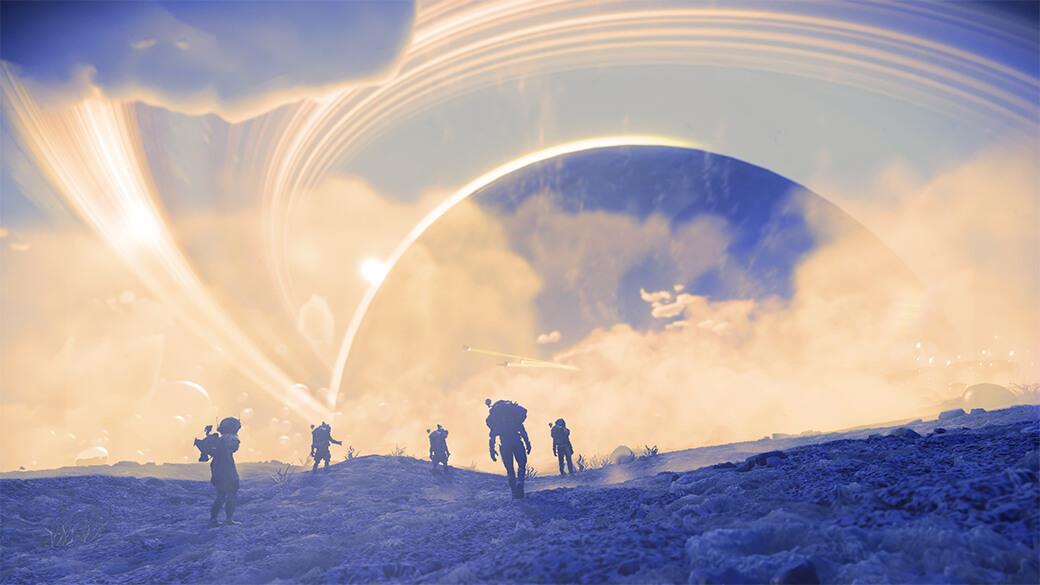 And the hits just keep on coming. Quickly approaching its 5th anniversary, No Man's Sky shows no sign of slowing down. The latest and greatest—Update 3.3—is called Expeditions. It's a brand new way to play, dropping off players onto a bustling hub world with everyone else, everybody with a fresh character, and community goals to work towards. And no one can ever call Hello Games lazy. The update/patch notes are a bafflingly long list of bullet points, as always.

Introducing a whole new game mode: Expeditions. Each of these events starts from a fixed point in the universe, bringing the whole community of travelers together to embark on a shared journey. Each expedition is structured around a series of Milestones. Complete these unique exploration goals in any order as you earn rewards, meet up with fellow travelers, and experiment with new ways of playing No Man’s Sky.

Each Expedition phase is made up of milestones. Each fully completed phase unlocks a unique reward. An extra reward awaits expeditionary completionists. I'm told there are patches! Missions from space station mission agents have been given greater depth. Rewards have been rebalanced. You don't just follow map markers to mission targets anymore. You've got to sweep the area through your visor to pinpoint exactly what you're looking for. There are rewards for weekend warriors taking on new weekend event missions. Special rendezvous planets have been set up so you can reunite with other community players along the journey, to either build a settlement, or to just wave bye to on your way by. Explorer ships have been enhanced. They're the science vessels that look more like bugs. And new Expeditions will be starting up all the time, each with a different theme. Also, watch out: Sentinels have improved tactics and equipment. The big ones even show up via orbital drop. Then the discoveries database is now cross-platform. It doesn't matter what you're playing on, everybody's discoveries are pooled together.

And this game is on everything: PlayStation 4 and 5, Xbox One and Series X|S, even Oculus, PS VR, and Steam VR, as well as regular ol' Steam for PC users. I could've sworn that when Hello Games started releasing small side projects (The Last Campfire) that No Man's Sky production would begin to shutter. But nope. No way. This is a game that keeps on giving. At this point, five years on, it almost doesn't make any sense that you only have to pay for this game once to get the insurmountable number of updates its released. Even those of us that were disillusioned on launch day have to finally admit, Ok there, Sean Murray, y'all have done enough now.